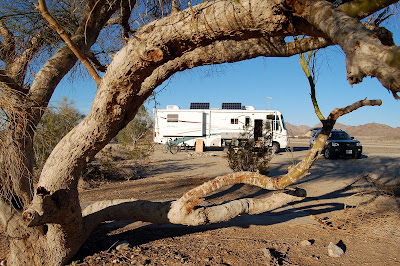 MOVED TO OUR NEW SITE TO-DAY

The site we were camped at just off Ogilby Road was ok, but since taking a liking to the area over this past week we decided to look for a better spot & stay longer. It's a big area with lots of wide open spaces to park so we drove around in the car this morning looking for our next newest campsite. Spent about an hour & put on about 20 dusty miles driving up & down rough gravel roads through gulley washes, up dry creek beds, around tight turns & through thickets of creosote shrubs. Finally, we found ourselves a nice quiet spot.........about 500 yards from where we started out!! We had actually walked through this area last week but had forgotten about it. Oh well, it was a nice way to spend an hour & see other parts of the desert we wouldn't normally have seen. 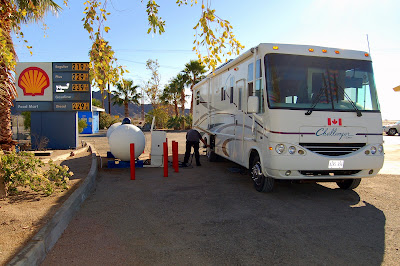 TAKING ON A LOAD OF PROPANE AT PILOT KNOB

We are into our 11th boondocking day & figured we'd better get some tanks dumped, take on some fresh water & pick up some propane. Packed up the motorhome, took down the solar panels, loaded up the doggy guys & headed back towards Yuma to a place called Pilot Knob where a Shell Service Station alongside Interstate-8 had dump facilities, water & propane. Didn't take us long to get our business taken care of & we were on the road again heading back to Ogilby Road & our new campsite. Picked up the car on the way by our old campsite. Our new site has a few trees nearby & is more private than our other site where we had a 5th wheel parked about a quarter mile to the south of us. This spot just felt more like home & already had a big firepit in place. Took the bicycles off the motorhome for the first time & had us a short ride around the rig. Yep, feels like home alright. Nearest visible neighbors are about three quarters of mile north of us. That is an acceptable distance for boondockers:)) We'll keep our fingers crossed that no one moves in between us & causes an overcrowding situation!! 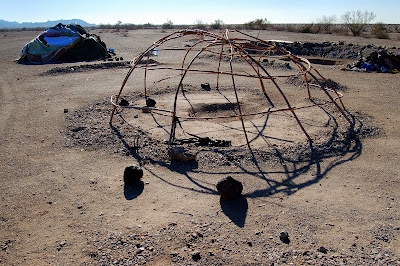 STRANGE PLACE IN THE MIDDLE OF THE DESERT

Yesterday after leaving the Tumco mining town site we drove north on Ogilby road about 10 miles & hung a right turn onto a gravel road leading off into the desert. We had heard there was petrified wood up this road plus a narrow canyon. The area was called, Indian Pass. Drove for quite awhile but the mountains just seemed to be getting further away so decided to turn back. Just as we did we noticed another short road leading to some kind of open air structure. It was odd to see something man made out here in the middle of nowhere. We cautiously drove in to what almost looked like a lemonade stand. Very odd. Then we spotted what looked like some kind of tent & large open wooden structure built in a wide circle around a single tree. The only tree we had seen out here for miles & miles. Shut the car down & got ourselves out for a look see. Bags of garbage had been torn apart by some animals, full water bottles laying on the ground, tables set up & a small sheltered cooking area complete with two pots on a grill. One pot was empty & the other one had a lid on it. Carefully lifted the lid & peered in. Looked to me like it might have been some kind of stew at one time but it was covered in mold. Very strange I thought. Everything was set up as if people had just been there minutes before, but mold in the large pot suggested no one had been here for a long time. We hollered a couple "hellos" at the tent across a gravely wash, but no response. Slowly approached the tent area & noticed a low semi-circle stone wall around a large deep firepit. Just beyond that was some kind of tent affair made out of tarps, old blankets, & just about whatever else could be thrown over the frame. Some of the blankets & pieces of material had slipped down & we could see inside as we approached. Nobody there. Stuck my camera in an opening & snapped a picture. Just a pile of stones in the middle. We walked around the site trying to figure out what this was all about. Valuable tools, like axes & picks were scattered about on the ground. Some tools were stood up against the shallow stone wall. Another tent like structure had been under construction with all the wooden branches carefully lashed to-gether with binder twine & rope. A very large circular structure made out of trees & limbs completely ringed the single tree. This was a large area & reminded me of a smaller version of Stonehenge, only in wood. Best way to describe all this is for you to have a look at the pictures I took while we were there.... http://picasaweb.google.com/stargeezerguy/
Maybe an alien spaceship came down & beamed everybody up.................................................. 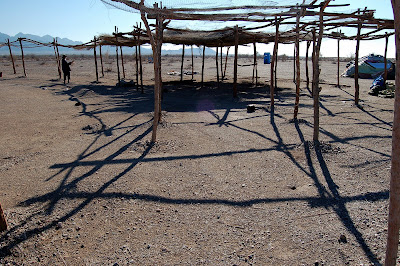 OUR PHOTO ALBUMS http://picasaweb.google.com/stargeezerguy/
Posted by Al Bossence at 12/21/2008