LETS HAVE US A LOOK AT PINOS ALTOS 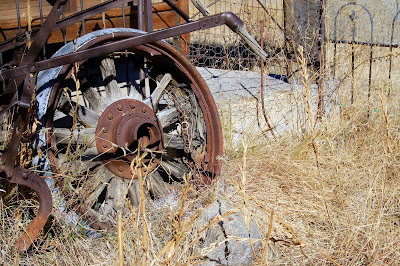 On our way to the Gila Cliff Dwellings on Monday we kind of blew right through the old mining town of Pinos Altos before we even new we were in the town. The small highway skirts by it before the few houses you see actually registers in your mind they are part of the town. To-day we drove the short distance from Silver City back to little Pinos Altos. http://www.pinosaltos.org/histsites.html

In 1859 a group of forty niner miners heading home to California discovered gold in Pinos Altos. A rough & tumble town sprang up & was soon the center of a gold bonanza, and ................Apache Indian raids. One of those raids occurred on Sept 22, 1861 when 400 Apaches attacked the town. Capt. Thomas Mastin, nine Arizona scouts, & a number of miners defended the town's mining camp. The Indians finally withdrew but not until Capt. Mastin & his brother Virgil had been fatally wounded.

Pino Altos is not a town in the way we think of a town. It does have a main street with some pavement at one end & dirt at the other end about 2 blocks away. That is basically Pino Altos except for a smattering of buildings in various states of livability scattered about for maybe a quarter mile in each direction. And yet, as the owner of the general store & post office told us, "this is paradise." And, you know what.....I am inclined to agree with him. 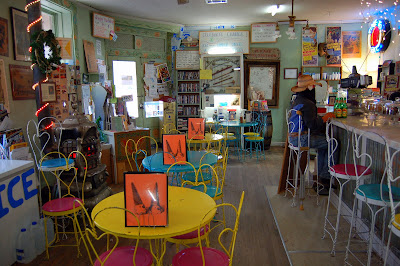 We spent maybe three quarters of an hour in Pino Altos, taking photos, walking around looking at things, & talking to a total of 2 people. The General store/post office/restaurant/gift shop/ is the hub of activity as we noticed people driving in to pick up their mail. Check to-day's photo album for the pictures I took inside the general store & Kelly's "special friend" sitting at the lunch counter.

Many of the houses & buildings here are well beyond repair but it is this very fact that gives this town it's special ambience & authentic western feel. I could have taken pictures of houses that we are used to seeing but decided to focus my attention on the decaying history that makes this little place....paradise. My kind of town:))

Nice scenic drive back to Silver City & our little home away from home. It was 1 o'clock & we spent the rest of the afternoon relaxing & soaking up the warm New Mexico sun. Well, at least I did. Kelly slipped into town for a bit of browsing at some stores she had noticed earlier.

I have added a few more pictures of the RV Park we are staying at to a previous web album.......
http://picasaweb.google.com/stargeezerguy/MANZANOSRVPARK
Posted by Al Bossence at 12/03/2008