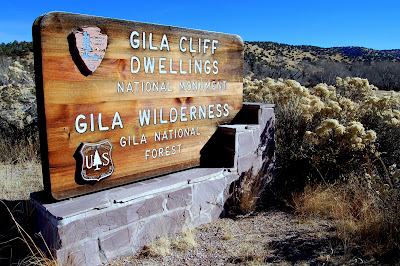 Our Blue Flame heater performed flawlessly all night & I think it's because we cracked open a second window creating some cross ventilation bringing in more oxygen. RV furnaces are generally not very fuel efficient so we don't like to use it a lot. The Blue Flame heater is rated as 99.9% efficient & is used by a lot of RV people. They are made in Mississauga, Ontario but you can't buy them in Canada. Have to get them in the States. Don't figure, do it!!

We were on the road & headed for the Gila Cliff Dwellings by 9:30 under sunny skies & warming temperatures. Highway 15 snakes it's way upwards through the beautiful pine woods of the Gila National Forest. It's a narrow road & one of the most challenging drives I've ever been on. There is no let up in the tight curves as we constantly wheeled through hairpin turns. The drive from Silver City to the Dwellings is only about 45 miles but it's a 2 hour drive because of the twists. We were warned to watch out for deer & ice in the corners. Didn't see any deer but a Javelina ran across in front of us at one point. No black ice but as we gained altitude we seen small frozen water puddles alongside the road. This would be a very bad place to be in the winter snows they have here.

I remembered at one point that my smaller Canon camera had a video setting on it so I handed the camera to Kelly & she took a 90 second video out the windshield of the winding road. We had already been through the toughest part of the route & this section wasn't too bad. It's nothing special but it gives one an idea of the road. If we do it again I'll remember to turn off the radio. (if you don't see the video here you will know I'm having trouble getting it upoaded)

Finally, after what seemed like forever we arrived at the Visitor Center for the Dwellings. Walked around, looked at a few things, & then drove the short distance to the trailhead where a guided tour was going to begin at noon. It was a rather brisk walk through a very steep, narrow, & freezing cold canyon, crisscrossing a half dozen little bridges that spanned a rocky creek bed. The path became very steep the higher we got & because we were hurrying to catch the tour we were doing a lot of huffing & puffing, especially me. I would have to say that it was the most winded I have ever become on a hike but we pushed onwards until we finally had the cliff dwellings & the tour guide group in sight. http://www.nps.gov/gicl/ 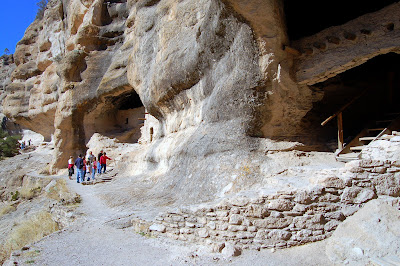 It's always hard to imagine how people lived centuries ago & this place was no exception. As the guide walked us to each cavelike dwelling she explained that a lot of what she was saying was speculation because the Mogollon (pro-nounced Muggy-own) people who built these dwellings inside these caves were a mysterious people & there is still much to be learned about them. Their houses were built of stone & held to-gether with some kind of mortar. They had roofs, doors & some openings for windows. They were a small people with men being about 5' tall & the women around 4 feet. The few doorways & openings between rooms are small. Fire hearths in the dirt floors & blackened cave roofs from many cooking fires. There are hard to spot pictographs on the walls & rocks. 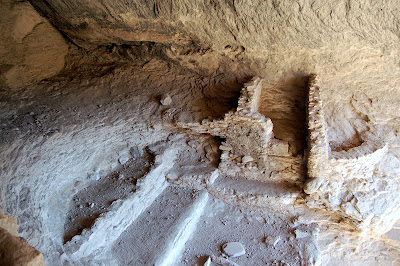 Our guide was very informative, answering the many questions from the group as best she could. I found it difficult taking pictures because of the harsh lighting conditions between the darkness of the caves & rooms, & the harshness of the bright sunny day going on outside just a few feet away but I did manage to get a few pics for the album. I don't normally include a lot of people in my photos but in this case it was important to include them to give one a sense of depth & size in proportion to the cliff dwellings.

Our tour lasted about an hour as we scrambled over well worn rocks & stone steps. Up & down ranger made ladders & wooden stairs. We walked on dirt floors between ancient stoned walls that no longer echoed with the laughter of Indian children or the voices of a people long lost to the wisps of time. A very special place & we were very fortunate to have been there to-day.

The trail back down to the trailhead took a different route & was not as steep as the one we had come up. Nice to get back to the car & sit down for a bit. We drove a short distance to the Lower Scorpion campground where the ranger had told us we could see a bunch of pictographs. I had asked the ranger earlier what the difference was between a pictograph & a petroglyph. Pictographs are painted on rock & petroglyphs are carved into the rock. A short walk brought us to a large rockface where we saw many pictographs & I was able to take some pictures. We followed another short path to a Mongollon dwelling made of stones & set into a cavelike rock overhang near a dry creek bed. It is still mainly intact & it's always hard trying to imagine how people lived centuries ago. 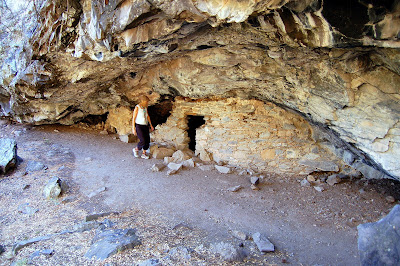 A SMALL MOGOLLON DWELLING AT THE END OF A SHORT PATH
The drive back to Silver City was longer in miles but easier on the Santa Fe's gearbox because we took a different return route. There are actually 2 ways to reach the dwellings. We returned via the Roberts Lake & Mimbres route with it's gentler curves & long flat straightaways. Glad to reach highway 180 & do the short homestretch to our little RV Park. .Glad to get back to the rig & flop into one of our comfy red Poang chairs. It was one of my favorite kinds of day. A challenging drive, new scenery never before seen, some good old rock scrambling, some photo opportunities, & a whole lot of good old exercise. And having someone as great as Kelly to do it all with just puts that special bit of icing on the cake..........................:)) 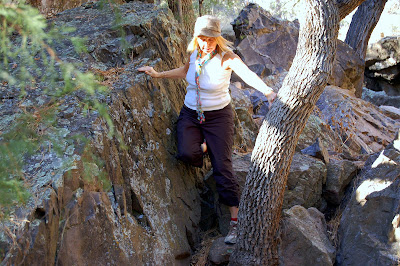 OUR PHOTO ALBUMS http://picasaweb.google.com/stargeezerguy/
Posted by Al Bossence at 12/02/2008