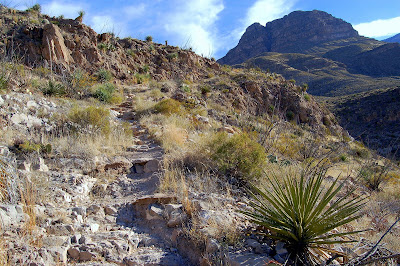 Decided yesterday we would leave for Las Cruces on Tuesday afternoon instead of early Wednesday morning. Figured it was better to be at Recreation America/Sunland RV well in advance rather than dragging ourselves in at the last moment, first thing in the morning.

Oliver Lee State Park has a steep rock strewn trail running 5 miles into Dog Canyon just behind the ranger station so we decided to at least see if we could maybe get a mile's climb in first thing this morning. Apache Indians used the steep canyon as a stronghold because of water located there. The Cavalry led 5 different raids into this canyon in pursuit of the Indians. On one of the those pursuits, the Indians escaped & the only thing left behind was a stray dog, thus......Dog Canyon. 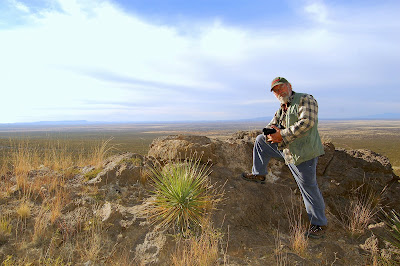 KELLY GETS AL TO POSE FOR A PICTURE
The trail was very steep in many places with a lot of loose rocks so we had to pay attention to what we were doing. Didn't take long for the huffing & puffing to start but it felt great to be getting into some good healthy exercise again. Rock scrambling like this is one of my favorite things because of the moderately easy challenges it presents. Not life threatening but not just a boring walk on a hard flat surface either. Following the switch backs Kelly made it up about 800 feet & went a few hundred more beyond that. What a perfectly great way to start the day. The view out over the valley floor easily stretched for 70 or 80 miles. Maybe more. And, not a sound in the canyon, not even a bird. Only the beating of one's own heart. Prickly pair cactus, Agaves, & Ocotillo, were but a few plants that filled the rocky landscape sweeping up the canyon walls to the towering mountains above. Be sure to check the photo album for some of the photos I took along the rocky path. http://picasaweb.google.com/stargeezerguy/ 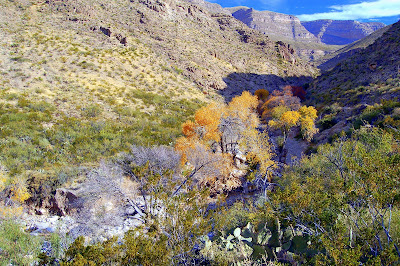 WE COULD HEAR A SMALL CREEK TUMBLING DOWN THROUGH THE TREES

The descent is always much harder than the ascent. It's on the descents that most accidents happen for hikers. The legs are in a totally different dynamic situation when feet are pointing downhill instead of uphill. I sure was glad Kelly had made me get a new pair of good Merril hiking boots before we left on our trip. Had I been wearing my old smooth bottomed Rockports this morning I very likely would have been upside down at some point for sure. Our rock scramble lasted about an hour & a half & by the time we made it back to the parking lot my legs were beginning to feel rubbery. I was glad we hadn't pushed ourselves any further on our first real hike of the trip. 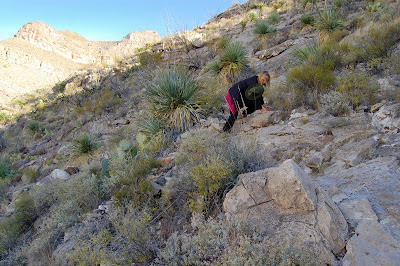 COMING DOWN IS ALWAYS THE HARDEST PART
The climb had really spiked our appetites so a bit of breakfast was high on the priority list when we reached the motorhome. Began packing things up for departure. Slides in, furniture squared away, satellite dish dis-assembled & put away, doggies loaded up, bins locked etc. Always so much to do but it sure beats sitting at home watching television & looking out the window. We stopped at the dump station & emptied our gray & black water tanks & it was at this point I made a little mistake that would embarrass me later in Las Cruces.

Rolled out of Oliver Lee State Park about 11 a.m. & headed for the White Sands National Monument which was on the highway to Las Cruces. An overcast cloud cover had rolled in on our way there & I figured things might not look as nice at White Sands but upon arriving I immediately realized the stormy skies were perfect for some great photos. We drove the motorhome on the 8 mile drive through the dunes stopping only one time for pictures & the rest of them I shot from the rig's window. Especially the people ones. This is quite a place to see & I'm glad we took the time to stop here. 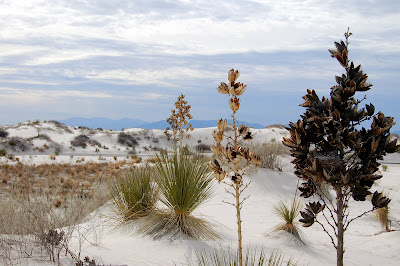 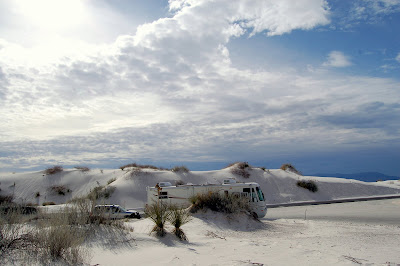 WHITE SANDS NATIONAL MONUMENT 8 MILE DRIVE The highway between Alamogordo & Las Cruces is a straight & flat drive until you reach the base of the San Andres mountains & the hefty climb over the mountains begins. It's a long uphill grade to the summit & we were down to about 40 MPH & sluggin it. Then, all of a sudden it's over the top & hang onto your shorts Lucy, we're heading for the bottom. The descent into Las Cruces is like an inverted rocket ride. Gear down, short bursts of brakes, more gears, more brakes, more "holy craps!!

Las Cruces is a very spread out city but we found our way through the 8 lane highways, ramps, & turn offs alright & were able to drive right to the Sunland RV dealer in the southwest end of town with no problems.
Pulled into the parking lot & checked into the service department. They said it would be ok for us to stay right in their lot for the night & they would supply us with electricity. Shut the rig down & decided to go out for supper for a change because we had spotted a Crackle Barrel a few blocks away. Grabbed myself a nice long hot shower in the rig & thought about life & everything great & wonderful. A few minutes later I noticed a couple workers walk by looking under the rig. Remember me saying I made a little mistake earlier in the day that would later embarrass me. Yep, I did alright. I had forgot to close the gray water valve back at the dump station at Oliver Lee so all of my shower water went down the drain, into the holding tank, out the holding tank pipe & right out into the parking lot. There was so much hot soapy water under our rig that I swear I saw a flock of ducks coming in for a landing!!

It's the first time I've ever had supper at Cracker Barrel & "wow" was it great. Roast beef & real live mashed potatoes with gravy. Kelly makes me eat a lot of ho-hum leafy green healthy stuff all the time so this was a real great blow-out for me. Yes Toto, there is a yummy food God afterall.

So, here we are, tucked away in the Sunland RV parking lot for the night awaiting our financial fate in the morning when they check out our hydraulic leveler problem. If you don't hear from us for a very long time it just means we are sitting on a corner in downtown Las Cruces selling pencils to pay off our mammoth repair bill here at Sunland................... wish us luck:(( 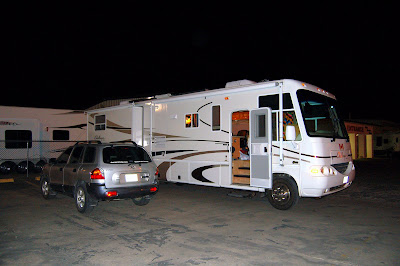 OUR OVERNIGHT SPOT AT SUNLAND RV IN LAS CRUCES