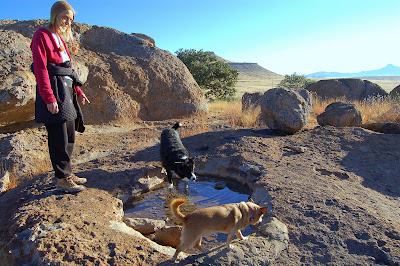 MORNING DIP
The nearby coyotes were sure kicking up a storm about 5 a.m. this morning & that got Checkers to growling, which in turn got Al to waking up, so figured it was time to get myself vertical for another day. We have always been early risers no matter what time we go to bed. The smarter folks in these parts sleep in till 10 & wait for the morning sun to warm things up first. Outside thermometer says it's 43F & that's a lot better than back home where it could be 33 or 23 or...

While in Las Cruces a few days ago I used a pair of scissors & some black electrical tape to tape up a couple rope ends I had just cut. Laid the scissors & tape on the hood of the tow car, proceeded to hook the car to the rig & then promptly drove the scissors & tape all the way to Deming & then up here to City Of Rocks State Park. The scissors & tape were pretty much where I had left them when we got here & the bra on the front of the car had prevented them from sliding off. I imagine the truck drivers got a kick out seeing that stuff riding on the hood as they went by in the passing lane. Maybe that's why they always shake their heads at me with big grins on their faces.

Lots of sunshine this morning but it sure was cold. The higher you go in these parts, the colder it gets. Really nice morning walk among the big rocks. The dogs loved it too as they clambered to & fro. Noticed that this State Park has a theme and all the campsites are named after constellations & stars. Because Astronomy is a hobby of mine I'm able to look at each site & know exactly where it's namesake is in the night sky. And speaking of the night sky, the cooler air here is soooo crystal clear. Stars from horizon to horizon. And, those two really bright ones in the early southwest sky right now are not stars, but actually Planets. Jupiter & Venus are drawing ever closer to each other. Venus is the brighter one & right now is below Jupiter. 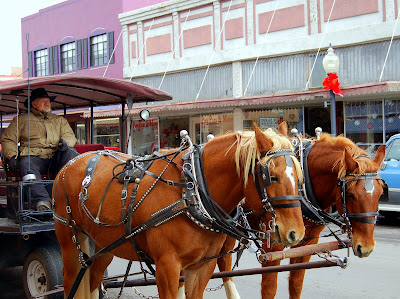 HORSES ON THE MAIN STREET OF SILVER CITY

We headed off for Silver City about 9:30 with a load of laundry & a couple of addresses to look up. The closer we got the blacker the sky became & by the time we rolled into Silver City it had started raining. And, it was COLD!! Some RV friends had told us of a good place to eat on Bullard Street so that's where we headed. Nice little place with lots of ambience. Food was good too. Another recommended place was the Curious Kumquat so I busied myself with taking a few photos while Kelly browsed around in the Kumquat. From there it was a few more blocks to a local Laundromat & while the grungy clothes were doing their tumbly tumbly, swishy swishy thing, we walked over a neat little bridge to the downtown section. Kelly went her way through the shops while I hung out on the main street snapping photos here & there. It's a nice looking town with shades of Mexico & the type of place a person could get used to. Reminded us a bit of Jerome, Arizona & Palomas, Mexico. Narrow little side streets with colorful shops & quaint little restaurants. An eclectic mixture of people with Jaguars parked on the main street to homeless people rummaging garbage cans & dumpsters. One cowboy looking guy asked me where I was from & said, he "always wanted to get up to Canada someday," while another snappy dresser guy tweaked my arm going by saying, "sneakin some pictures are ya." Guess he saw me pick him off with my telephoto lens when he was across the street. He's in to-day's photo album:)) 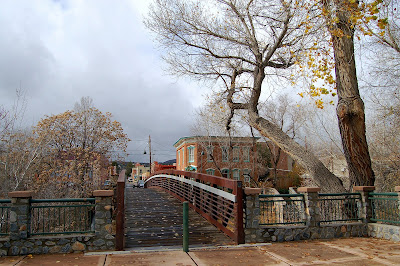 BRIDGE OVER "THE BIG DITCH" TO DOWNTOWN

Headed back to the Laundromat & scooped up all the nice smelling threads, picked up some bananas & milk at a grocery store & then headed off to find the first of two addresses we had. Last winter while in California we had heard about a man & his family who lived for years on a mountaintop with no accessible water or electricity. His name was Marshal South & we drove west of Boreggo Springs to Blair Valley where his homestead was located on Ghost Mountain. We hiked the 700 foot rocky path up to what was left of Yaquitepec & spent awhile looking around at things. I found it a very serene & special place despite not knowing anything about the man & his family. There was uncanny peacefulness to this place & it has had a lasting affect on me. A week after being there Kelly bought the book entitled, Marshal South & The Ghost Mountain Chronicles. It was to be the first book I would read from cover to cover in the last 30 years. Marshal South's oldest son, Rider, is still alive to-day & lives in Silver City. I had looked up his name & address on the internet awhile ago & just wanted to drive down the street & see where he lives. So, that's what we did. If I wasn't so sensitive about bothering people I would have went & knocked on his door to say, hello. 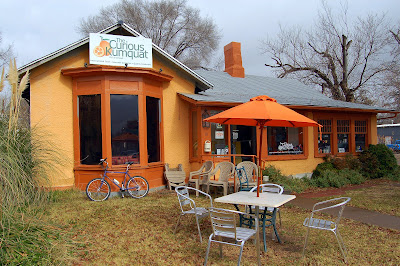 Our next look-up was a fellow RVer. We have been reading his blog for awhile & communicated back & forth via emails a few times. When he knew we were coming through this part of the country he said for us to drop in & say hello. We found him in a nice RV Park on the edge of Silver City. Nice fellow, just like most RVers we have met in our travelers. Didn't overstay our welcome & we were soon headed back to our little temporary home on wheels in one of the nicest State Parks we've ever been in. So nice to drive out of the dark, rainy & cold sky's of Silver City into the sunlight of the lower altitude & City of Rocks State Park. 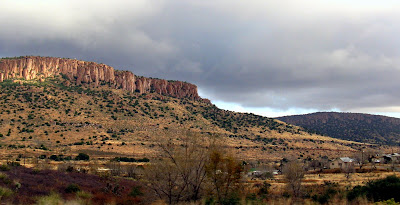 Lots of wagging tails when we got back but I think the cold air had followed so it wasn't long & we had our Blue Flame heater going full tilt. Nachos for supper & another nice relaxing night ahead. To-morrow we're hoping to head east over to the Emory Pass & then backtrack up to the Gila Cliff Dwellings north of Silver City............................. 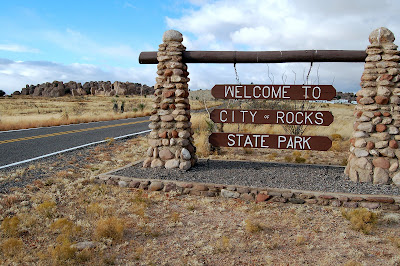