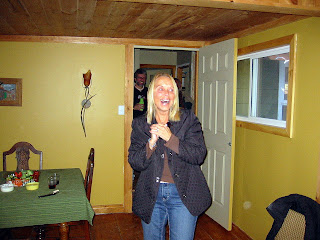 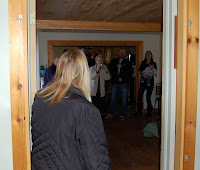 Last October just before we headed for the southwest I was over doing some yardwork at Deerpark Lodge where Kelly works when Kirsten, the owner, came over to talk to me & wondered if I was planning on doing anything special for Kelly's birthday on March 30/08. I said I had been thinking about that & she said she had an idea.

Kirsten has been so appreciative of all that Kelly has done for her these past 4 years at Deerpark Lodge & said she would like to do something special for Kelly on her(60th)birthday. Said she would pay for Kelly's 2 daughters to fly from Vancouver & Spain to be here for her birthday & also to have Kelly's entire family come from Rochester NY & Cambridge, Ontario. They could all spend the entire week-end at Deerpark. I thought, "WOW" what a great idea, so in that brief 10 minute conversation we hatched a plan to spring a surprise birthday party for the end of March the following year of 2008. It would be another 5 long months before Kirsten & I would meet again on the grounds of Deerpark for another quick conversation only days before the party.

But, going back to October of 07. Immediately following our conversation that day I sent out an email to all of Kelly's family members laying out Kirsten's idea & that started the ball rolling. However, just days later we headed off in the motorhome for the American southwest thousands of miles away. Problem now was......how could I communicate with anyone back in Canada. It was difficult at first trying to figure it out because I couldn't email Kirsten at Deerpark in case Kelly checked the work email account there. We had an old email account that we seldom used so I tapped into that & emailed Kelly's daughter Sabra in Cambridge. We established a link & I had Sabra only send emails between the hours of 10 & 10:30 at night after Kelly had gone to bed. And that's how we worked on the birthday plans for the next four & a half months while we were on the road in the American southwest. Biggest challenge for me was remembering to delete all traces of any emails I had sent or received. No easy task for this aging memory:((

Now, we'll fast forward to the end of March 08. It was clear that Kelly didn't have a clue about the surprise. I was shoveling some snow at Deerpark last week when Kirsten came over for a quick chat. We were able to firm up a few last minute details. It was the first time I had talked to her since our first conversation 5 months earlier.

So, here's how we sprung the surprise. Kirsten made sure Kelly left work at Deerpark early Friday afternoon because all the family members were due to arrive at the Lodge about 3. Around 5:15 Kirsten phoned our house saying a large newly installed window in one of the recently renovated cabins had just blown out, she's worried about it, & she needs me to come over to take pictures of it for her insurance adjuster as soon as possible.

I had already mentioned to Kelly that we should go out for supper Friday night & then a movie in Goderich so I said to her, "well lets go over now & I'll take those pictures before we head for Goderich." 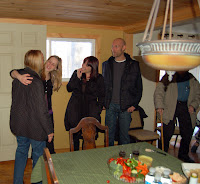 As we drove into Deerpark I noticed all the family cars were parked at the far end of the park & some were hidden behind cabins. I knew everyone would be in the big lodge room right behind the office so when we pulled in I said to Kelly that we might as well go into the office first & take some additional pictures of that newly renovated area while I had the camera with me. We parked the car & went in. Kirsten was in there & said to Kelly, "good thing your here because I need you to light the furnace pilot light in the next room." (adjacent to the office) So without hesitation, Kelly opened the door & walked into the big lodge room..........

There was Kelly's whole family (almost:)) standing there. She was sooooooo shocked & it took her about 10 seconds to grasp the reality of the situation. Her mind just couldn't put to-gether what she was seeing. And then her daughter Sabra said, "and here comes another surprise Mom." With that, her 2 other daughters from Vancouver & Spain came walking out of another room:)) It had been a couple of years since she had seen them. Poor Kelly was just dumbfounded at what was happening & totally overwhelmed. The surprise was a complete success & a good time was had by all for the whole rest of the week-end:))))))))