THE LITTLE WESTERN TOWN AT THE END OF THE ROAD 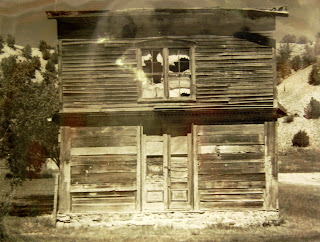 To-day was another one of those special day trip days. Stopped at the Elephant Butte State Park office & picked up some maps & pamphlets on the surrounding area. Kelly had heard of a little Pecan store in a town nearby called Cuchillo so off we headed. It's not far from Truth or Consequences & we were there in less than half an hour. Not much left of the town except some old derelict buildings scattered along the road. Rich's Pecan farm was the only place that looked like it had any life to it so we stopped in. Pecan tree orchard at the back. A nice lady came out of the house & over to the shop. 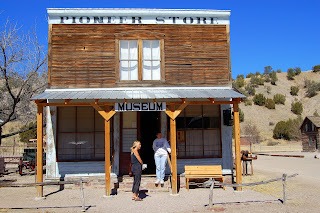 They had a big pecan festival there a week ago & she said about 1600 people attended. We bought some pecan fudge & a pecan pie before resuming our journey westward in search of the little western towns of Winston & Chloride. Once you get across the flat open desert setting & into the foothills of the mountains, the scenery really begins to take shape with gently rolling hills studded with Juniper trees. Again, it was my favorite kind of road with good pavement & lots of twists & turns. Another gear jammers paradise. The further we went the more beautiful it became. Distant mountains had snow on their peaks with the slopes covered in forests. It was rare to meet another vehicle & when you did, everybody waved. This is truly a different planet here than where we come from in Canada. It took us awhile to reach Winston & we were disappointed at what we saw. It reminded us right away of another place we had been where the human population had little regard for their environment......Slab City, in California. Old wrecked cars, junk of all description, smashed windows & debris everywhere. This once pretty little place was totally trashed. It was sad because the countryside surrounding Winston is so beautiful. The town of Chloride was only another 2 miles further on & we were apprehensive as to what we were going to find there. These places were all once booming mining towns with thousands of inhabitants but all that's left now in some of them is usually some old tumble down weather beaten buildings with a few residents scattered about. As we rolled into Chloride we could immediately see there was a difference here. OUR PHOTO ALBUMS http://picasaweb.google.com/stargeezerguy/ No junk, no old upside down cars with smashed out windows, no litter sprawling across the ground & no sign of human neglect. Yes, there were some buildings in disrepair but there was something different here. The road finally came to a dead end just past the Pioneer Store & old Saloon building. That was it, it just ended there. Back up & turn around. Kelly remarked that it looked like we came to the end of the world. We pulled the car over across from the Pioneer store & shut it down. We could tell that this was going to be an interesting place. 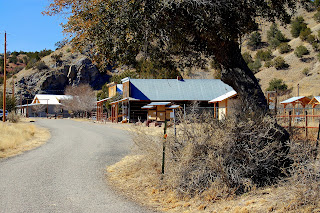 The hills & canyons around Chloride are out of a picture book. There is a quiet peacefulness in the air here. We were very fortunate to meet a local resident lady across the street who took us in the Pioneer store for a look around. Her family is connected to that building & she knows the history of all the merchandise first hand having been a part of the 4 year intensive restoration project. This is a truly remarkable building with all it's old history & merchandise intact. The story of how this building was painstakingly restored is as remarkable as the building's history itself. The best way for me to describe it is to have the readers go to the town's informative website. All the information is there & well worth the read for anyone interested in old towns of the west. http://www.pioneerstoremuseum.com/index.html We also briefly met the man who is responsible for the rebirth of this little town. (and putting to-gether the website idea) He was busy with restoration work on the old bank. It is clearly a labor of love for this fellow & if it wasn't for people like him, much of the history of the old west would be lost forever. I forgot to get his name & we didn't want to keep him from his work but if you get to Chloride, I'm sure he won't be far away. This little town is a page out of history................. 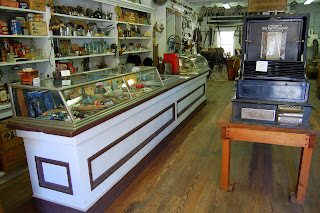 A beautiful drive back through the rolling hills & out onto the desert floor. Stopped at the State Park in Elephant Butte to fill some water jugs before returning to the rig. Norm & Becky picked us up around 5 & we all headed out to Hodges Corners Restaurant for a buffet supper. Great place & they had real mashed potatoes too. Of course we ate soooooo much that we nearly all exploded again but what the heck. Becky & Norm insisted on paying the bill so that was pretty nice.
Back to our rig while Kelly helped Becky with some more computer stuff. I googled up a website that had old television & radio theme music on it so we all sat around guessing what themes they were. Kinda neat stirring up those old memories. Gunsmoke, Andy Griffith Show, Petticoat Junction, Gilligan's Island, Star Trek, Superman, Amos & Andy, The Munsters, Bonanza, Dragnet, The Green Hornet, My Three Sons, Father Know's Best, Columbo, Dallas, The Honeymooners, Mash, My Little Margie, Leave it to Beaver, Sanford & Son, The Lone Ranger, and, and, and, the beat goes on:))

OUR PHOTO ALBUMS http://picasaweb.google.com/stargeezerguy/
Posted by Al Bossence at 3/01/2008