THROWING SNOWBALLS IN THE EMORY PASS 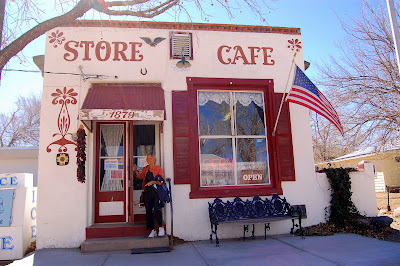 Nights are cold in the high 30's but as soon as the sun gets up the day warms nicely into the mid 70's & the sun's rays are really warm. Thought we would take a drive west into the mountains & have a look at Emory Pass & the Gila National Forest. Nice smooth road drive across flat plains & then into some gentle twisting & turning foothills. Gotta figure out a way to bring the motorcycle next time. The little town of Hillsboro finally appeared ahead of us. Some RVing friends had suggested we stop into the Barber Shop cafe for a great hamburger but it wasn't open yet so we walked across the road to the General Store Cafe. Great little place with lots of antiques & nice ambience. OUR PHOTO ALBUMS http://picasaweb.google.com/stargeezerguy/ I had a big mess of bacon & eggs while Kelly had Pinto beans with an egg on top, plus red chile sauce with cheese.

From Hillsboro we headed west through a little place called Kingston & on into the Gila National Forest. Wow, we finally saw green trees that were actually taller than us. We immediately fell in love with the area as we climbed higher & higher up the pine forested mountainside on a road that kept me on the ball shifting gears in the tight corners. I like when that happens:)) Beautiful towering Ponderosa pines & junipers hugged the side of the road. And what a treat it was to see soooooooo much green!! We hadn't realized we missed our trees from back home so much until we drove into this overwhelmly beautiful forest. We caught glimpses of snow ahead high on the mountain & it wasn't long & we were there. We had reached our destination of the Emory Pass summit. Had to pull over & get some pics of that snow for sure. Kelly whooped up a snowball & let it fly over my head. 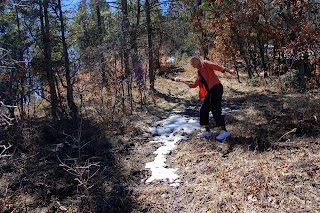 The view from the Vista viewpoint over the valley floor below showed us the winding road we had just come up. We had considered going on to Silver City but we don't like to leave the dogs alone in the motorhome for too long a period so we turned around at the summit & headed back down the mountain. By the time we reached Hillsboro again, the Barber Shop cafe was open so we popped in for a loaf of fresh bread that had just come out of the oven. Really liked the interior of this store & I like how so many people here in the west are so artsy in their decorating.
OUR PHOTO ALBUMS http://picasaweb.google.com/stargeezerguy/ The still warm loaf of bread smelled so good in the car on the way home that we couldn't leave it alone & by the time we got back to the rig it looked like a big mouse had been nibbling at it. Still warm as I sliced off a piece & smothered it in real butter. You were right Herb, it was grrrrreat:))