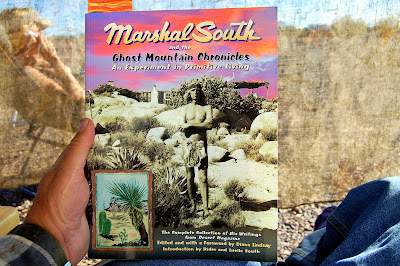 SUNDAY JANUARY 20/08
Our day started out well enough although it was very cold again. We were planning on either driving up to have a look around the town of Parker or maybe slipping over to Ehrenberg to have a look at something called, Red Schneider's ranch. However, sometimes the best laid plans of mice & men sometimes go astray & so it was to be to-day.....twice!!

The Class A motorhome rolled leisurely into our area this morning, slowed down & stopped. Oh oh!! We watched ,& had our fingers crossed that he would move on because there is lots of room here. He didn't!! They got out, unhooked their car, made a slow pass around the area in it, came back & moved their motorhome even closer to us. We had a sinking feeling that our quiet & peaceful little corner of Eden was about to end. When we saw the driver get out & start placing colored traffic cones around a large area we knew the writing was on the wall for us. Obviously more motorhomes were on the way for some kind of rally. We were beat & our only option was to pack up our whole campsite & head off in search of a quieter spot. I'm sure they were fine folks in that motorhome but many rigs mean much big people noise & people noise is not one of our favorite things. We did wonder however, why he picked this area close to us when there were numerous other spacious areas all around. Just one of those people things I guess I'll never understand.

Took us the best part of an hour to get all packed up. Awning up, outside furniture loaded, bicycles put on the rack, flagpole down, satellite dish dismantled, mats picked up, wires unhooked, firewood loaded, doggy toys picked up, inside things stowed away, slides in, jacks up, etc. etc.

On one of our morning walks last week we had walked to an area about a quarter mile away & decided that if we had to move because of congestion, this would be a good spot to go, so that's where we went. Took us 3 trips with the car carrying things to the new site but soon we were in the process of re-setting up our new site. It was actually a nicer site than the one we just left. A few more trees, a nice creek bed & further away from all the other rigs & rallies. Kelly made some nice stone Inukshuks & set up her Ghost Mountain agave stocks in a little desert landscaping bed. Got everything re-assembled without too many problems & it wasn't long before we were sitting in our favorite gravity chairs relaxing on a beautiful sunny Sunday afternoon again. The turmoil of having to move had settled down, Kelly was on the phone talking to her Mom & Dad in Spencerport, New York, doggy guys were snoozing on the new outside mat & I was happily tipped back in my chair reading my book. Nobody near by, lots of room all around us & everything was right with world once again. 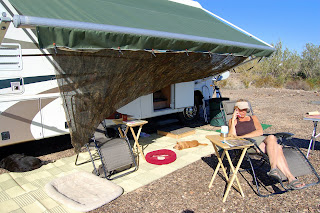 And then..............we saw another Class A motorhome coming, followed by a 5th wheel. Oh no!! Surely these people will have some respect for our privacy, right. Wrong!!!! They circled the large open area & then came right over & pulled in just a stone's throw away from us. And worse yet, they were towing ATV's!!!! We couldn't believe it. With all the room & open spaces in this desert area they came right in on us. I know this is public land & they have as much right to be here as we do, but...%$@^&**. I understand being close to people in campgrounds because that is what's expected. It just comes with the territory. But out here in the desert with acres & acres of room?? Then they unloaded & started up the dreaded ATV's & I heard in a loud gruff voice, "I WANNA RIDE!!!" That was it for me right there & then, & to say my anger was over the top would be putting it mildly, but there was absolutely nothing we could do, except.......move!! And, so it was, as we once again began the process of packing up the campsite. Awning up, outside furniture loaded, bicycles put on the rack, flagpole down, satellite dish dismantled, mats picked up, wires unhooked, firewood loaded, doggy toys picked up, inside things stowed away, slides in, jacks up, etc. etc. And I'm not going to say this time, "I'm sure they were fine folks in those two rigs."

We moved to a different area further back in the desert which we scouted out with the car first. Once again, nobody near us except for one Class C rig which we were considerate enough to give a wide berth. Both Kelly & I have great respect for people's privacy & would never ever pull into an area & go park beside the one rig that might be there. We consider that extremely thoughtless & rude!! 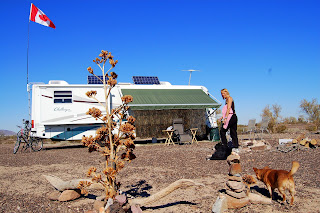 Ok, now that I've got all that off my chest, maybe I'll sleep better to-night. But wait, what is that I hear approaching across the quiet desert floor again..........awwww, it's just the wandering desert wind coming upon us under another clear moonlit Arizona sky:))
Posted by Al Bossence at 1/20/2008