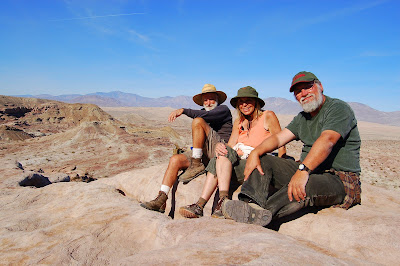 SUNDAY DEC 23/07
Another big bright sunny California morning & a beautiful sunrise over the Santa Rosa mountain tops to the east. Just plopped myself into a chair facing the sun & soaked up some rays while Kelly drove into Borrego Springs for some groceries. Nice relaxing way to start the day.

We picked up our neighbor Butch at 10:30 & headed off for an 8 mile drive to a part of Anza Borrego Park called Slot Canyon. It's a very difficult place to find & if it wasn't for Butch knowing where it was we would have never found it. It's a bumpy dirt & sandy 2 mile drive off the highway across the desert floor to where the canyon begins. At first glance the slot canyon looks like a simple gravel pit but once we started climbing down into it & got a few hundred feet along the dry creek bed, the canyon began to live up to it's name. This is quite a place & not a good spot for somebody with claustrophobia or for anyone severely overweight. The narrow river carved canyon twists & turns, narrows & widens, & holds surprising rock formation surprises around every corner. It just boggles the mind trying to imagine how all this was once formed & is still being formed with every rain storm. And speaking of rain storms, these slot canyons are always fatal for anyone caught in them during a flash flood.
At some points we had to turn sideways http://picasaweb.google.com/stargeezerguy to squeeze through the narrow spaces between the steep rock walls & in other places the walking path on the sand & gravel bed was narrower than a shoe so you had to watch your step or risk spraining an ankle....or worse!! We finally exited the other end of the slot & the canyon opened up into what looked like a large beautiful kind of ancient gravel pit. Butch pointed out an unusual rock cropping far off & we headed for that, walking along a sand & gravel road. Reaching the rocky ridge formation with all it's swirls & swoops we began our ascent to the top. It was a medium climb made easier by the hard sandstone, & sure footed slope. The top was finally reached & we were relieved to sit down & finally break out our peanut butter & jam sandwiches, trail mix, & water. Took some pictures, marveled at the surrounding landscape, & had us a relaxing chin wag for twenty minutes or so before beginning our descent & return trek through the slot canyon. The hike back was as fascinating as it was coming the other way. We got to do all the tight squeezes in reverse. By the time we reached the car we had been gone about 3 hours & we were huffing & puffing a bit. Both Butch & I are 63 & spring chicken Kelly hasn't hit the big 60 yet so she wasn't doing quite as much puffing as Butch & I were. We are so fortunate to have met Butch or we would never have seen a lot of this stuff. Butch is a member of the Escapee's RV club so travels around with the boondockers & knows where all the great places are.
On our way back to the campsite we stopped at an orange grove & bought some grapefruits. Nice to see all the orange trees growing so well in the desert. Of course, Kelly snitched a couple of oranges off a tree so we had to beat a hasty exit. After getting back to our desert campsite we noticed a few other RV'rs had moved in & some of them were close to Butch's place. Very, very, inconsiderate considering the hundreds of acres of open space here in the desert. We also noticed a truck & travel trailer not too far from our site & after watching it for a bit we realized the poor guy was stuck. I took my bicycle over to Butch's place & we threw some lumber & shovels into his truck & headed off over to the hapless wanderers in distress. Boy oh boy, were they ever stuck, trailer & all.........and they were from Canada too. Alberta. Butch got to work with some jacks & I got on the working end of a shovel & we all worked on that situation for the best part of an hour & only got them moved about 20 feet. They're roadside service company wouldn't send a tow truck out because they were about a quarter mile off the highway. It was so frustrating for the couple. They had a big super Ford 350 four wheel drive truck, but with a 30+ foot heavy travel trailer on behind, the truck just kept burying itself in the sand. Darkness finally descended on us & we had to call it a day. The Alberta folks were able to use their trailer ok for to-night so we told them we would be back in the morning with some ropes & more wooden planks. I don't know though.......I think they just might have to make this desert their permanent home now.
While I was over there helping, Kelly got a nice campfire going, picked up my camera & took some nice pictures of a full moon coming over the mountain tops. There is just nothing this girl can't do.....................................say, maybe she can get those Albertan's unstuck in the morning