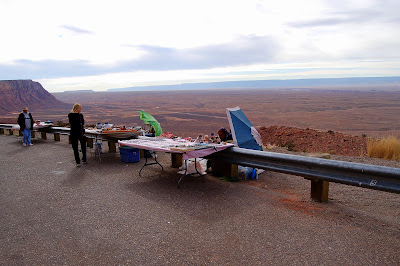 THURSDAY NOV 22/07
Hitched the car up to the motorhome & rolled out of Kanab's Crazy Horse RV Park about 9 a.m. heading east for Page, Arizona. A slight high overcast cloud cover was enough to take the razzle dazzle out of the colorful mountains, mesas, & desert floor.

Crossed the bridge over the Glen Canyon dam on the western outskirts of Page & spotted a Dennys so it didn't take us long to get ourselves in there for a tasty grand slam breakfast. Hit a Wal-Mart for some groceries & a Shell station across the road for a propane & gas fill up before leaving Page heading south on highway 89 on the Navajo Indian Reservation. Some steep grades & twisty roads led us to a viewpoint where Navajo Indian ladies had tables set up with Indian crafts. Beautiful view over the desert valley below.

Highway 89 runs fairly straight & level all the way to Cameron where we turned west & headed into the Grand Canyon National Park. It was getting late in the day & as the sun began to dip to-wards the horizon visibility became more of a challenge. Rolled up to the parks east gate around 4:30 & with the Forest Ranger's words, "the campgrounds all filled up" our day began to rapidly deteriorate. First, we had a very difficult time on the park's roads because of the blinding sun in our eyes & second, we got totally lost.

The South Rim of the Grand Canyon is a much bigger place than I had imagined & with the sun in our eyes we missed turning signs & after about a half hour frustrating drive we blew right out the park's south gate. Found a spot to turn around & re-entered the park, asked for new directions, & promptly got lost all over again. We were looking for the Mather campground where the Ranger guy thought there might be some primitive (no electric) camping sites left. You can only imagine now how tired, frustrated, & ticked off we were by now & by the time we found the camping area we were about ready to come home.

Took a drive through the campsites with electricity on the off chance we might find a vacancy but the place was jammed wall to wall with RV's packed in like sardines. It was obvious to us that the biggest mistake we had made was failing to take into consideration that this was the big American Thanksgiving long week-end & everybody's brother & uncle had flocked to the Grand Canyon to spend their Thanksgiving there in the beautiful weather. We located the other camping area without electricity & had to un-hook the car before entering because we could see it was going to be a tight squeeze on the narrow roads. And to make matters worse, it was dark!!

I drove the motorhome & Kelly followed in the car as we squeaked into a narrow uneven campsite. Activated the automatic leveling system & tried putting the hydraulic jacks down but I didn't think they sounded right. Meanwhile Kelly had spotted a better spot a few campsites away so I backed out of the tight spot & pulled into the other spot. Still uneven, but better. Put on the emergency brake, & flicked the switch for the hydraulic jacks & .........nothing happened!! The system never activated & was totally dead...no power to the jacks. That lead to a second problem because now we were unable to level the coach which meant we could not take the chance of putting our two slides out because at that off angle we knew the slides would never re-track again & that would have left us in one hell of a pickle. Of course by this time Al is a total stressed out wreck after a looooong driving day & Kelly is trying to hold things to-gether. Even the little doggy guys were stressed.

Temperatures rapidly dropped as we got the furnace going on battery power. Lit some candles because I didn't want to use the lights & run the risk of draining the batteries. Didn't sound like the furnace was running right but at least we had heat & we didn't end up freezing for the night. Here we were at one of the world's most beautiful places & we hadn't even seen it because we knew that we had to pull out at first light & head the 75 miles to Flagstaff in hopes of finding a garage open before the week-end that could figure out what had gone wrong with our hydraulic jack problem. Needless to say it was a poor night's sleep as the stress of the recent few hours took it's toll. Probably our very lowest point since leaving home:(((( 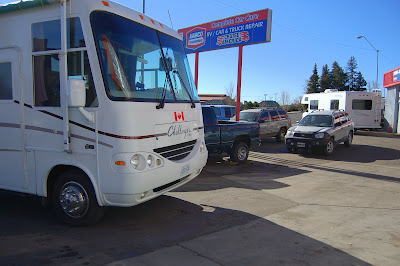 FRIDAY NOV 23/07
At first light while all hardy campers around us were fast asleep we were up & rolling out of the campground. Didn't bother hooking up the car in the below freezing temperatures. Found my way out to the main road with Kelly following closely in the car. We knew there was a small commercial community just outside of the park's south gates so that's where we were headed.

Heavy traffic coming into the park so figured they must be the workers coming in for all the retail business's around the rim. Spotted a McDonald's with a big flat parking lot so hooked up the car & McMuffined ourselves. Luckily, we were able to pick up a Wifi signal for the computer so it didn't take Kelly long to find some RV dealers & repair facilities in Flagstaff. A couple of cell phone calls found us an RV repair place that was open, & best of all, the guy said he could have a look at our problem as soon as we got there so without further ado we were southbound on highway 64 for Flagstaff, Arizona.

Another big bright sunny morning, traffic was light, & eventually we hopped on I-40 east & in no time at all we were tangled up in Flagstaff traffic. Blew right by the repair place but noticed it had a super small parking lot so we managed to head down a side street, stop & un-hook the car & then made our way back to the repair garage. Nice people there & they had a young fellow out & working on our hydraulic system within minutes. Took him about half an hour to determine that the problem had originated inside the electronic box & he then had it fixed in minutes. We thought the $45 bill was very fair & within an hour of getting there we were on our way again. (in hindsight we later figured it might have just been a blown fuse)

On our trip from the Grand Canyon to Flagstaff this morning we had noticed a KOA campground near the town of Williams so we decided to head back that way & check in there. We were in bad need of rest, re-organization, & re-grouping. The KOA was expensive but we were too tired to go any further & besides, our problems weren't quite over yet.

A fellow on a golf cart escorted us to our site but after pulling in I noticed the site was really uneven, but the next site was level. He said ok, back up....so I did & in the process I caught our CB aerial on a tree branch & promptly ripped it off. From there I proceeded backwards into an electrical box. But, it didn't matter, I was tooooo tired at this point to care. Amazingly enough, I had a spare aerial so was able to get my ladder out & replace the broken one & so far I haven't seen any damage to the coach from that jaywalking electrical box. But, that was it for me.

After a welcome hot shower I just sat in a chair inside the coach in a somewhat dazed & tired state of affairs for the rest of the afternoon watching some horribly boring afternoon television & soaking up some of that big beautiful warm Arizona sun streaming in the window.

Going down to 18F to-night but our furnace is working fine now, Kelly cooked up a super turkey supper, we're comfortable, warm, & it looks like the Bayfield Bunch has survived another day:)) We're on the move again to-morrow because this KOA is too expensive, but hopefully we're not going too far & we are definitely headed back to the Grand Canyon sometime in the next few days.
Posted by Al Bossence at 11/23/2007