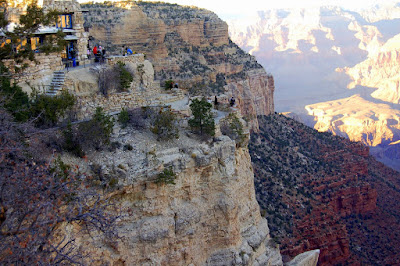 SATURDAY NOV 24/07
Watched a fellow RV'er trying to untangle his frozen water hose this morning. Looked like he was wrestling (unsuccessfully) with a twisted steel bar pretzel. Thermometer said it was 30F. Took the dogs for a short walk on a rough rock strewn trail & then packed up the motorhome. We felt this KOA was way over priced for what they were offering.

On our trip from the north rim to Flagstaff a couple days ago we had noticed a Fred Flintstone RV park about half way between the Grand Canyon & Williams Az so we decided to head back there with the motorhome & check it out. We didn't hook up the car because it was only 30 miles away but Kelly missed an exciting drive in the motorhome because of the huge wind gusts blowing across the desert floor trying to get the motorhome airborne. Was glad to pull into the RV park in Valle at the intersection of highways 64 & 180. Well, I think I was glad. Upon closer inspection it became obvious this Flintstone era theme park is well beyond it's heyday. Half a dozen older aluminum sided permanent trailers are sprinkled here & there. This was probably a very popular going concern about 30 or 40 years ago when Fred, Barney, Wilma, & Betty were prime time television stars. I'll let my photos in the web album tell the story.....http://picasaweb.google.com/stargeezerguy but at least the price was much better at $14 a night. There is also an old airplane museum here as well & across the highway is an updated version of the twentieth century with modern hotels, gas, groceries, & a trendy state of the art trading post. All & all, this is a good jumping off point for the Grand Canyon's south rim if you have an RV & are looking for a cheaper spot to base your rig. No internet here but on your way to the Canyon just stop in front of the trading post beside McDonald's in Tusayan & you can pick up a Wifi signal.

Found us a good level spot but because of the high wind gusts we didn't put the slides all the way out in case the wind ripped off the slide awnings. Kelly whipped up some bacon & eggs & about an hour later we jumped in the car & headed off to the Grand Canyon about 25 miles to the north. As I mentioned before, the Grand Canyon south rim is a very big place with many confusing little roads running willy nilly everywhere. It's kind of a tangled megapolis between man & Mother Nature. I think man is definitely winning the struggle. There were people everywhere & the place was crowded. Parking lots were full. There is a whole village there with restaurants, groceries, hotels, lodges, railway lines, campgrounds, maintenance yards, ranger stations, etc. etc. etc. We had a hard time finding our way around again but finally blundered into a parking lot entitled A. From there we were able to get our bearings & followed a paved path for about a quarter mile to the canyons rim. And "Wow" what a canyon it is too. Biggest darn hole in the ground I've ever seen. The visibility was better in the canyon from what we had seen at the north rim. Not as much haze, pollution or smoke. It was around 2 in the afternoon so the sun was still fairly high & the canyon was well lit although in photography terms it was very flat lighting & not the best for dramatic photographs. The shadows had not begun to creep across the canyon yet.
Walked along the rim trail heading east taking photos as we went & marveling at Mother Nature's handiwork. It's hard to comprehend how something can be so big & it boggles the mind trying to understand the whole vista laid out before you. It's one of those places that you can't explain in words or pictures. You just have to go there & see it for yourself. My photos don't come anywhere close to showing you the beauty & vastness that abounds at the Grand Canyon. We walked on as far as the Yavapai Observation Point & then headed back to the car snapping more pictures along the way. From parking lot A we drove the short distance to the Grand Canyon Village itself, parked the car, watched people boarding a train for their return trip to Williams, Arizona, & then headed up on the rim trail again on the north side of the hotels & lodges. People, people, everywhere in the snack bars, hotels, restaurants & out along the rim gazing into the canyon. We walked down to the Outlook Studio for a quick look around before it closed. Sun was going down fast now & the shadows in the canyon began their long stretch across the canyon floor & up the canyon walls until all the canyon was in full shadow with just the canyon tops being lit by the setting sun. We walked to the old El Tovar Hotel & went into the lobby to see & feel the ambience of a hotel built back in the early 1900's. Theodore Roosevelt was one of it's early guests. Have a look at the photos I took inside on our web album. By the time we came back outside the sun was down & the temps were dropping rapidly. Had a last quick look into the darkening canyon & then made a bee line for our car somewhere about a quarter mile away.....somewhere. Remember, I said this is a very confusing place with all it's twisting roads, parking lots & thousands of people milling about everywhere. Luckily my sense of direction kicked in & we found the car ok & none too soon as my sore knee was really barking. Made the half hour drive back to our Freddy Flintstone park in a long line of night traffic. Good to be home!!
The doggy guys were so glad to see us they nearly wagged their tails off. The feeling was mutual:)) Fortunately the big winds had stopped & we were able to put our slides out. Kelly whooped up