FROM BEDROCK TO DEAD HORSE 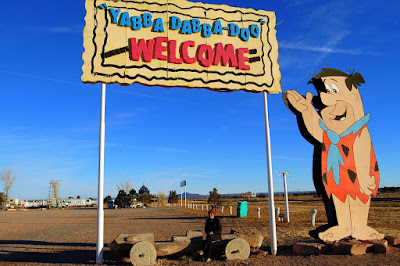 SUNDAY NOV. 25/07
Our outside thermometer told us to stay inside this morning because it was only 27F & would you believe there was a tent pitched a few sites down. How those people (kids) keep warm in flimsy tents at those temps I'll never know. Better them than us I guess.

Took the dogs for a walk around the big Freddy Flintstone parking lot & snapped some pictures of the Bedrock RV Park. Somebody sure put a lot time, effort, & money into this place years ago. There's a whole theme park behind a colorful wall but we didn't see that. Quite a place, but I kinda liked it because maybe I got a little bit of Fred in me:))

We were on the move again by 8:30 heading south on highway 64. Hopped I-40 west for a few dozen miles then climbed off on 89 heading down through Chimo Valley. Our destination was Dead Horse State Park southwest of Sedona. We could have (should have!!) gone through Flagstaff but we had already been there so I figured we would try a different route & see new sites. Oh boy, was that a mistake!!!! Somewhere south of Chimo Valley we grabbed highway 89A east for Sedona. We had only gone a few miles when we noticed the first road sign & then a few miles more we noticed the second road sign that said, No Trucks Over 50 Feet. Oh Oh!! We weren't sure what that meant but by the look of the Mingus Mountain range in front of us we figured it might be a wise move to un-hook the car. Wow, was that ever a right decision!! Kelly had one walkie-talkie & I had the other & within minutes as Kelly followed me, we were into the most challenging stretch of road I had ever seen.....ever!! And there was no turning back & no room for turning around. The twists & turns on this road made the switchbacks at Zion Canyon look like child's play. Blind curves, no shoulders, 15MPH hairpin turns, steep grades, sheer cliff drop-offs. This long stretch of road over Mingus Mountain had it all. There was no let up, no sigh of relief, just deadly curve after deadly curve. On some blind curves I was nearly stopped to edge myself around. I was so close to some of the guardrails with the motorhome it nearly scared the paint right off coach. I felt kinda sorry for some of the drivers coming the other way because all of a sudden they had a big 33 foot motorhome in there face coming at them on a road that was hardly passable for 2 Volkswagon beetles in some spots. I had to reach deep into my bag of driving skills numerous times but all & all, it was an exciting drive to say the least. And then, just when I was beginning to enjoy the challenge, I saw a sign ahead that said, "Road Narrows." Oh geeeeezzzz!!!! Within seconds I was into the mountain town of Jerome, Arizona. And this town was like no other town I've ever seen. If I thought the mountain road was narrow, it was nothing compared to the main street of Jerome, weaving & winding it's way around buildings, curbs, people, parked cars, & just about anything else imaginable. Reminded me of movies I've seen of Swiss Alpine Ski Villages. Couldn't resist grabbing the camera & taking some pictures as I twisted through the streets. I could see Kelly behind me & knew she was going to be very upset by the time we ever got to where we were going, but, there was no place to stop so had to just keep on going in the hopes I didn't catch a top corner of the motorhome on somebody's eave trough or protruding balcony. Some of the corners were so tight I was way over into the other lane to get around them. Eventually the buildings dwindled as we made our way down the rest of the mountain through the town of Clarkdale & then into Cottonwood. Found a place to pull over on the main street so we stopped & touched base for a minute. As soon as I got out of the motorhome I could smell hot brakes. Despite gearing down on the hills & using my brakes sparingly, I still managed to overheat the brakes on the rig. Found that a little scary but at least we were down on the valley floor & out of the mountains. A few minutes later we were able to find Dead Horse State Park & were soooooo happy to pull into a nice quiet campsite & shut everything down for another day. The lady camphost who lives there told Kelly, "I can't believe you came over Mingus Mountain in a 33 foot motorhome." Well, I can't believe it either, but we did. We definitely won't be going back that way but you know what.......I wouldn't have missed that little stretch of excitement for anything, but, I wouldn't want to have to do it all over again either. Aw yes, another day in the life of......The Bayfield Bunch:))

P.S. No internet here at Dead Horse State Park so we tried again to set up our satellite system but without success. I just can't seem to find the satellite or something. So discouraging!! (I think I am right on the verge of being traded in:((

caught up on things.