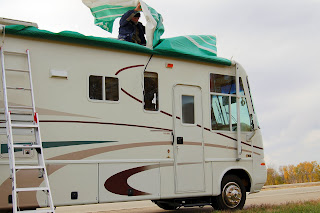 Up about 5:30 a.m. hooked up the car, said good-bye to our scenic Pawnee campsite & we were on the road heading west on I-80 by 6:30. The buffeting Kansas winds were hitting us nearly head on from the northwest so we quickly pulled into a rest area & I tied some rope around the awning arms just in case. Turned off I-70 onto highway # 81 heading south for Kansas. This was a great 4 lane highway with hardly any traffic on it & was the nicest drive we had since leaving home. Very relaxing in a gently rolling countryside & a beautiful sunrise to boot. Because the big winds were behind us I figure we must have been getting about 351.2 miles to the gallon:)) At Salina, Kansas we picked up I-70 heading west for Colorado Springs & it immediately became apparent that the winds had greatly increased & swung into the north hitting us full force...broadside!! Felt like we were on a midway ride at times as the wind gusts had their way with us. Made for some mighty exciting driving to say the least. We had only gone about 10 miles when we heard a "pop" sound like a parachute opening somewhere behind us. Kelly quickly looked back out her window & hollered, "stop, stop!!!!" Quickly got the rig off onto the narrow shoulder out of the way of the huge trucks coming up behind us. Our worst fears had materialized.....about a third of the awning had been pulled out & was flapping fiercely over the top of the motorhome. Quickly got our ladder & some rope out & went up the side but could not get the rope around anything because the wind had the awning totally out of control. Climbed up the ladder on the back of the rig & got myself onto the roof but didn't dare stand up because the wind was just ripping across there. Glanced to the northwest & could swear I saw Dorothy & Toto go flying by. Kelly came up the ladder at the side of the motorhome & between the two of us we were able to get some rope around one end of the awning but it was futile jesture. The awning was already ripped & I was afraid the wind gusts would pull more of it out at any second & blow me off the roof onto the dual lanes of I-70. Lots of big trucks going by causing a secondary whoosh of air complicating things as well. Kelly got me a knife & I proceeded to cut the whipping awning off. The wind was cold as well & only an hour before we had stopped at a Wal-Mart for some groceries & I had picked myself up a winter togue. (warm winter hat) That was a lucky break for me. I had taken a length of rope up onto the roof so I cut short 15 inch pieces & worked my way along the awning securing it with about a dozen pieces of rope. Kelly grabbed a camera in the meantime & took a bunch of pictures. What a relief it was to get the last piece of rope tied into place. Carefully lowered the big chunk of awning down to Kelly & she crumpled it into the back of the car for later disposal somewhere. Didn't want it blowing out across the freeway onto somebody's windshield. Finally got down off the roof & back inside to the warmth of the motorhome. Whewwwwww!! We'll see about getting a new awning when we get to Quartzite, Arizona later in January. All & all we were very fortunate because had we not heard the "pop" of the awning opening & not got pulled over so fast, the wind would have quickly pulled out the rest of the awning which in turn would have acted like a fully inflated parachute & ripped the awning arms off the motorhome causing damage to the coach itself. We never did open that awning since the day we bought the motorhome back in the spring so what caused it to open like that, we have no idea. Glad we weren't pulling the fifth wheel because we never would have heard the awning go & would never have got pulled over right away. Also, on the fifth wheel we had last year there was no ladder to get onto the roof so we would have been in a big heap more trouble for sure 10-4!!
The rest of the day went ok, the sun came out, winds dropped a bit, overdosed ourselves at a McDonald's & we even found an internet connection while getting fuel in a little town called Russell. Managed to check our email, send a few, & do a fast update on the website.
We have an excellent book with us called, The Next Exit, & Kelly was able to use it & find an RV friendly municipal park in a little town called Ellis just south of I-70. Rolled into Ellis around 4 & were so happy to find a really great scenic little park alongside a river right in the little town itself. They had electricity, water, & the best part......we are the only ones here. It's only 2 blocks to uptown so we'll walk up in the morning & see if they have a computer friendly library.
Hopefully we won't be bothered by any trick or treaters to-night. We only have 2 Halloween candies which the greeter at Wal-Mart handed us this morning as we exited the store. All & all, despite our awning dilemma, it was an ok day & we're happy to have a good campsite for the night. Feeling a little tired & battered, but feeling fine, & glad to be here. The Bayfield Bunch has survived another day & it still beats sitting at home looking out the window all winter with nothing to do:)) zzzzzzzzzzzzzzzzzzzzzzzzzzzzzzzzzzzzzzzzzzzzzzzzzzzzzzzzzzzzzzzz 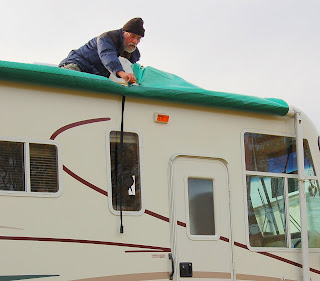