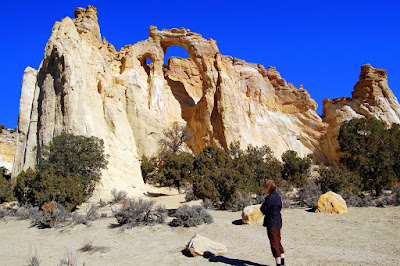 Another beautiful clear sunny morning. We sure have been lucky with weather ever since leaving home back on Oct. 27. I think we ran into a bit of rain maybe around Chicago somewhere but it seems soooooo long ago we can't remember.

This is our third stop at a KOA campground & I must say we have been very impressed with all 3 of them. Very clean & well organized. Owners have all been very nice & most helpful. We're not big on RV parks as a rule but at this time of year this far north in the off season we've been using them more because they are basically empty. Wouldn't want to be here in the busy season though. Toooooooooo crowded for us.

Our mission to-day was.......Grosvenor's Arch south of Cannonville, Utah. The pavement ends at the entrance to Kodachrome State Park & from there it's a rough ride to the Arch. The road twists & winds & at times I had to shift down into first gear to get up some of the hills. (our Santa Fe has a 5 speed manual transmission) Had to drive through a creek across the road at one point. The scenery was as usual, beautiful, with wide sweeping canyons & multi-colored mountains & mesas. Scrub pinion pine & juniper are everywhere. Cattle roam the desert floor & the occasional long abandoned old settlers cabins & farm buildings can be seen. Truly a place of magic shadows.

By the time we reached the Arch neither one of us had any fillings left in our teeth & I'm sure half the bolts in the car had fallen out on the washboard road. The Arch was as beautiful as the last time I had seen it back in 1992. We had only been there a few minutes when the couple from London, Ontario came bouncing in as well. Hats askew, jolted sunglasses, and I expect....missing fillings. Had us a big chin wag for about half an hour & they headed off down the road in search of smoother jostlings. When I had been to Grosvenor's Arch in 92 I had hiked around behind it & found a way to climb to the very top so it was something I wanted to do again. Didn't take us long to find the way up so we climbed right to the very top in behind the Arches themselves. It's not a hard climb, just a steady upgrade with the biggest danger being loose shale type rock which makes it more tricky coming down than going up. Beautiful view from up there so took a few photos & reminisced a bit to myself about the time I stood atop Grosvenor's Arch fifteen & a half years ago, way back in May of 1992.

The road back to Cannonville was just as rough as the road to the Arch & I guess that makes sense because it was the same road only the bumps were reversed. The little car was soooooo happy to have it's 4 little rubber feet back on solid pavement.

Reef area. All & all, another fine day for the Bayfield Bunch:))