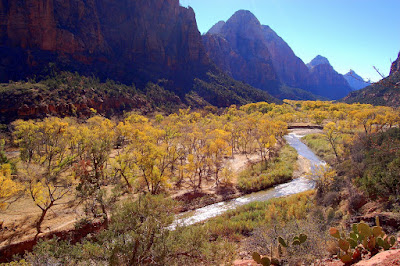 Cold start to the morning & our water was stiff. We are at the junction of highway 9 & the road that leads into the east entrance of Zion Canyon. We are at the little burg of Mt Carmel Junction on the northeast side. Area's a bit junky but the doggy guys didn't seem to mind as we took them for their daily morning spin.

Headed off to Zion about 9 a.m. & happily spent the next 5 hours in one of Utah's finest parks. The drive to the east gate is scenic but once in the park a whole new world of wonder opens up. Every foot of the way could be filled with a thousand photographs. I had to put the little Santa Fe on automatic pilot as I snapped pictures through the windshield. http://picasaweb.google.com/stargeezerguy The continuous curving road didn't always make it possible to pull off to the side for pictures so just had to do my best from the driver's seat. The splendor is totally awesome & we felt so lucky to be here to see the canyon in it's Autumn colors. The first tunnel was small but the second tunnel was over a mile long. Upon exiting the second tunnel the road does a series of tight switchbacks down, down, down, to the canyon floor far below. I was now glad we had decided not to bring the motorhome through the day before because it would have been sooooo hard on it with the steep grades. The engine, transmission, & brakes would have been under maximum strain not to mention the strain on the driver if he were to meet another big coming the other way on one of the tight switchbacks. I would strongly recommend all RV drivers of bigger rigs to use the south entrance into Zion & avoid the tunnel & the switchbacks. Much easier on driver & vehicle for sure........10-4!!

The area around Zion Lodge was so beautiful to-day as well with the aspen trees still having most of their beautiful golden leaves fluttering in the breeze. The sun shining through the trees gave the area a magical glow. We ate our peanut butter & jam sandwiches on the patio of the Lodge before embarking on a long trail hike which began just across the river from the lodge. The Kyenta trail climbs a couple of hundred feet above the river before heading south to the emerald pools area. The walk along here was totally splendid & I couldn't stop taking photos of the picturesque Virgin river below, lined with aspens & all framed by the majestic mountains. We saw rock climbers high on the cliff faces with their ropes dangling precariously below them. These people have to be either totally crazy or well beyond the belief of what is actually sane about the human race. But wow, what a sense of accomplishment it must be to actually reach the top of their destination & actually live long enough to do it all over again the next day. Super!!
After clambering higher & higher over the rough rock strewn path, our Kyenta trail finally led us all the way up to the top emerald pool. We actually met a young mule deer along the way & I was able to take some pictures of him before he slowly & unconcernedly ambled away. Spent about 20 minutes at the upper emerald pool before beginning our long & careful descent down the path to the middle emerald pool & finally the lower emerald pool where we were able to walk under & behind the waterfall which was but a trickle compared to the ice & snow run off from the mountains in the spring. By the time we reached the road again we still had another half mile back to the car where we started from & to say it was soooooooo great to reach the soft seats of the car would be putting it very mildly. Water & trail mix were in order as we drove out of the busy parking lot & headed to the visitor center. Browsed around a bit, took a drive through the Watchman RV campground at the south end gates to the park & then headed for home. Beautiful drive back but I was so tired I just left the camera sitting between the seats. It needed a rest too!!

We're always so glad to get back to the rig & see the dogs because we all make a big fuss over each other & I find that soooooo good for the soul.
Our Canadian neighbors arrived back shortly after we did. They had been on a tour of the park as well so we all walked over to the Thunderbird restaurant for supper & a big chin wag about the day's events. We sat there so long we all seized up & nearly had to ask for some cooking oil to lubricate our joints to get moving again. This aging process is sure hard on having fun sometimes.

In a nutshell.........Super great day & we wouldn't have missed it for anything. Our big bag of wonderful memori