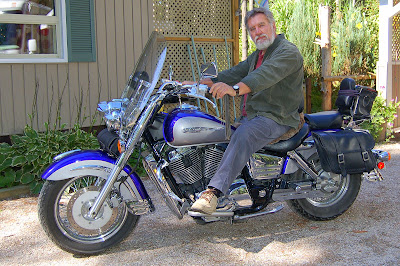 It's mid September, the days are cooling off & the nights are getting downright cold. Not too many biking days left. Back in the spring I traded my 1984 Yamaha Virago 750 for this 2002 Honda Shadow Aero 1100. A really nice bike, & my third. I had never ridden a motorcycle until I was 49 when I enrolled in a motorcycle training course at Conestogo College in Doon, Ontario.
I wrote a little blurb about my first time on the road with my 650 Suzuki shortly after that & posted it on a site called 50+ that I used to belong to. The subject word was "Excite." This is the little blurb I wrote using the topic......Excite!!

"Excite"....My little Webster's Dictionary here tells me the word excite means, "to call into action, to rouse, to stimulate." What it doesn't tell me is that it is something mostly encountered in early youth. The days as a child, when everything was new, exciting, & full of wonderment. Excitement is an elusive quarry now at age 62 but it can still occasionally be had. Excitement can take on many forms for different people & I have always found that fear is an important part of excitement. I had never ridden a motorcycle in my entire life until I was 49. A financial opportunity presented itself & I walked into a Stratford motorcycle shop one day in October of 1993 & bought a used Suzuki 4 cyl 650cc motorcycle. (can't recall the year) http://www.stratfordcycle.ca/ That was exciting for me, but then it got better. The bike remained in storage at the motorcycle shop for the winter & by spring the excitement, anticipation, & fear were all well in place. I signed up at a local college for a full week-end motorcycle training program. The course supplied the small Honda bikes & for two days we wobbled & jerked our way around the college parking lot on those noisy smoke sputtering machines. That whole week-end was an adventure in excitement all by itself. The day following the course I phoned the motorcycle shop back in my home town & asked them to bring the bike to my place of employment & leave it in the parking lot, which they did. I didn't want anyone around to laugh at me if I fell off the motorcycle & that's why I didn't go & pick it up at the bike shop.
After work when no one was around & everyone had gone home I donned my spanking new helmet, gloves, leather jacket, and approached the bike. Excitement began to escalate, but so did the fear. I swung my leg over the seat, straightened the front wheel, turned the key & pressed the start button. "VaRoooommm!!!!" Now, the fear really took over!!!! This bike was much bigger & more powerful than those wobbly little things we had been practicing on at the course. Just ahead of me was the street with lots of big huge noisy cars whizzing by. The fear & excitement was almost overwhelming (especially the fear). Decisions, decisions!! Maybe I should have taken up basket weaving. I put the motorcycle into first gear, took a deep breath, eased out the clutch & bounced unceremoniously out the driveway into the traffic, missed second gear, lurched into third, made a mind wobbling left turn & I was off. The cars all around me seemed close enough to touch. (because they were) Made it to the first intersection without getting run over & for the first time felt the teensiest bit of confidence. I had made it half a block & I was still upright, & alive. But, I think my legs were shaking worse than the motorcycle.

Before starting out that day I had already pre-planned my route so that I knew exactly where I was headed.....the cemetery. Yes, the cemetery!! In Stratford they have a big cemetery with lots of winding roads & no traffic. What better place for me to get to know how to handle my 500 pound motorcycle. And no one to notice any embarrassing mistakes on my part (and there were a few). The main emotion I was experiencing from the work parking lot to that cemetery was fear, but after reaching the quiet roads of the cemetery the true excitement of what I was really doing began to take over & the fear started to ebb away. (a little bit) It was scary but I managed to lurch my way around the roads getting used to the gears, shifting, & braking. Corners were shaky at first & some stops were nearly abrupt enough to throw me over the handlebars. But, slowly I began to develop a bit more confidence & actually felt a twinge of enjoyment squeak through that wall of fear. I was doing OK despite myself:)) Well, at least until it was time to get the motorcycle back home through all that traffic again. But, I made it alright & I was a pretty excited little boy when I went to bed later that night.

There were more exciting, hair raising, & fearful things awaiting me down the road on that motorcycle but for the time being I had completed phase one of an exciting adventure that had begun 6 months earlier when I had walked into that motorcycle shop & bought the bike. I had actually done my first ride in real traffic. And for me, that was exciting. Scary, but exciting. Four short months later I had a bone busting motorcycle crash that landed me in the hospital, but that's another "exciting" story for another time......... AL (Mr. Blabberfingers)
(Picture taken by Kelly....................... Sunday afternoon September 16th 2007)