A DAY IN STRATFORD PLUS ME AND MY CHUCKLES 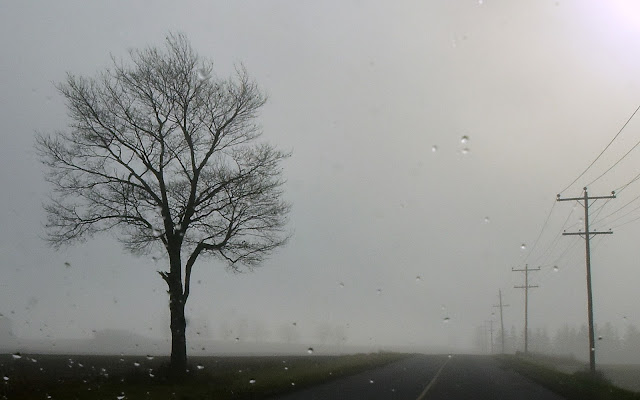 With clouds sitting right on the road this morning I headed out early for my 10:30 oil change appointment at the Subaru dealership in Stratford Ontario.  Sometimes the fog hangs around the shoreline and clears up a few miles inland.  But, not this morning.  I drove through fog right from our place all the way to the Subaru dealer.  With the corn harvest in full swing, there were a lot of big farm machines on the road and one had to keep a sharp eye out for big gray shapes suddenly looming out of the mists ahead. 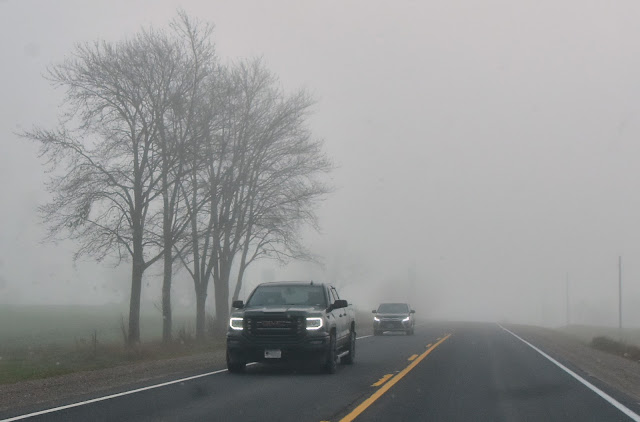 I made it to my appointment on time and they took me right in.  The service manager said he would have me out of there inside an hour.  And he did.  While there, I looked at a few Subarus in the showroom and purchased a tube of touch-up paint.  Most of my time was spent in the service department's waiting room reading my Kindle.  Here's what a Subaru oil change consists of in addition to the oil change....Inspected tire condition and adjusted all tire pressures.  Inspected and adjusted all fluid levels.  Inspected operation of all lights, wipers, and washers.  Inspected drive belt.  Serviced battery.  Inspected axle boot condition.  Lubricated all latches, hinges, and locks.  Inspected all steering and suspension components.  Checked underbody for damage.  Hey, and they even washed Subie before she left the shop:)) 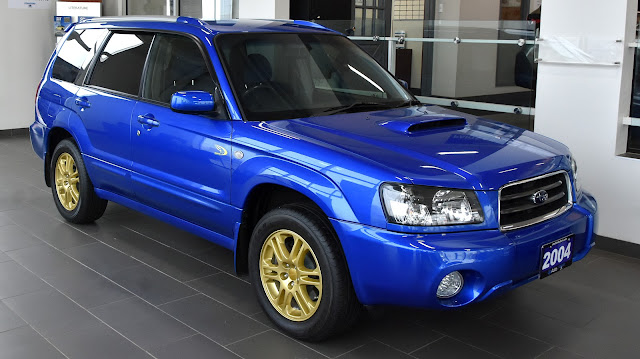 With some time to kill before my next appointment at Krown Rustproofing, I grabbed a burg and fries at Mcdonalds then slipped around to Avondale Cemetery where I have a few family members interred. (My Dad and my Uncle Harry)  The problem was I couldn't remember where they were buried despite walking around and looking, so I headed off to my next appointment not too far away.  It took less than half an hour to get the Subaru undercoated and I was back on the road again headed over to my good buddy Jim's place.Picking up Jim we headed for a nearby Tim Hortons coffee shop.  One orange juice for Jim and one decaf coffee for Al.  Neither one of us could remember the last time we had sat down for a coffee together.  And we couldn't remember if it was at Seaforth's Tim Hortons or Seaforth's ballpark.  We had been getting into the habit of bringing lawn chairs and sitting outside at the Park.  Jim and I caught ourselves up on a lot of stuff, solved a few worldly problems, and discussed this terrible aging thing we and so many others our age seem to be so afflicted with.  Enduring Hortons hard ass-flattening plastic bench seats and holding our coffee blow-out down to just a couple hours we both agreed that next time we would get a couple old barn pillows and some binder twine and lash those pillows to our keisters.  I dropped Jim off about 4:20 and set my course for home backtracking along the same Quinlan Road route I had used coming to Stratford.  An hour later I sure had a happy little tail-wagging doggie welcoming me home.  By the way, Jim has a few new posts up on his blog site and you can find him here at Lifetime Sentences 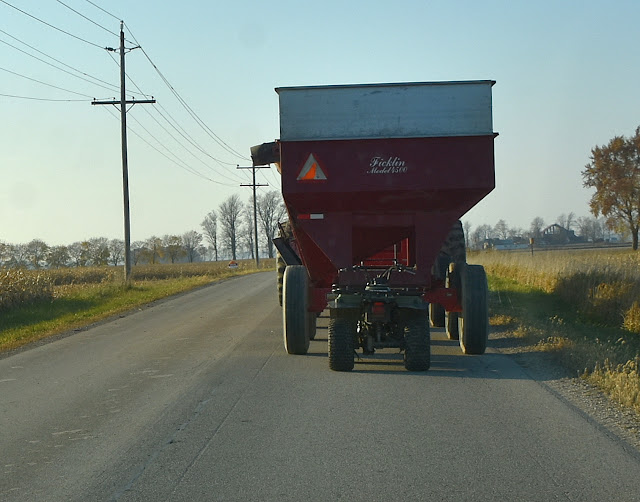 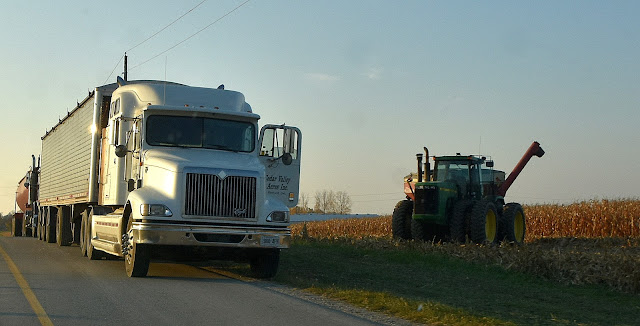 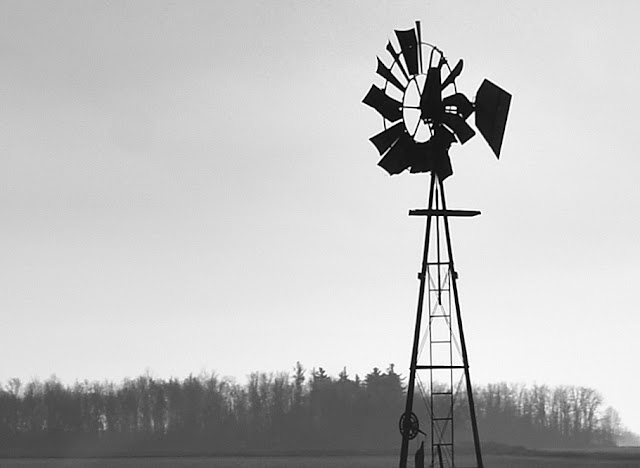 If I were to say I had maybe one chuckle a year I would not be stretching it.  If I were to say I have been having a dozen chuckles an hour lately, I would be pushing it.  But not by much.  A chuckle is defined as 'to laugh inwardly or quietly'.  So what brings about my chuckles you ask??  For me, these last few days, it has been a rather impetuous little freckle-faced girl with pigtails.  I'm speaking of Anne of Green Gables of course.  I can't seem to help myself as I am reading along and come across all the silly antics this mere little wisp of a child gets into or comes up with in her innocent muddles and missteps.  I am becoming a real chucklehead as I stretch back in my recliner, book in hand, and chortle away.  Yes, chortle.  When a chuckle is combined with a snort, it becomes a chortle.  Oh heaven forbid if a chortle got away from me and became an outward downright laugh.  Should that happen to me one of these days soon I'm sure I'd be startled into a state of sure shock.  I don't know that I have ever laughed out loud but it must be so when I was much younger I'm sure.  Oh how I would love to have something move me to great guffaws of laughter someday.  And, by golly, if that little Anne keeps a-goin the way she has been going, I just may unexpectedly startle myself one of these fine days and bring the roof down. 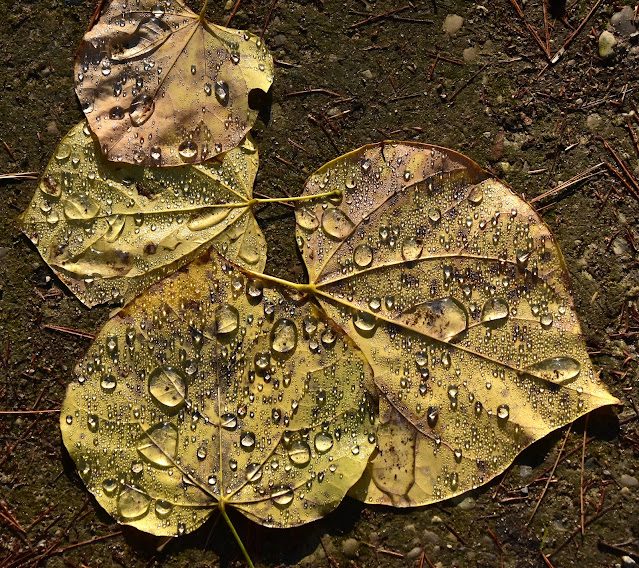 GROANER'S CORNER:((  A taxpayer received a strongly worded "second notice" that his taxes were overdue. Hastening to the collector's office, he paid his bill, saying apologetically that he had overlooked the first notice."Oh," confided the collector with a smile, "we don't send out first notices. We have found that the second notices are more effective."

"Grandpa, why don't you have any life insurance?"  "So you can all be really sad when I die." 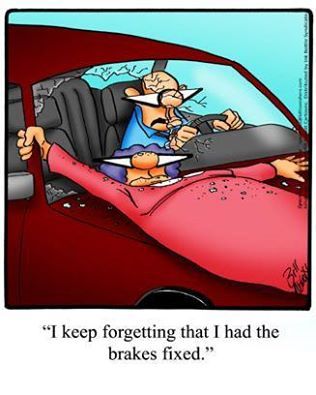 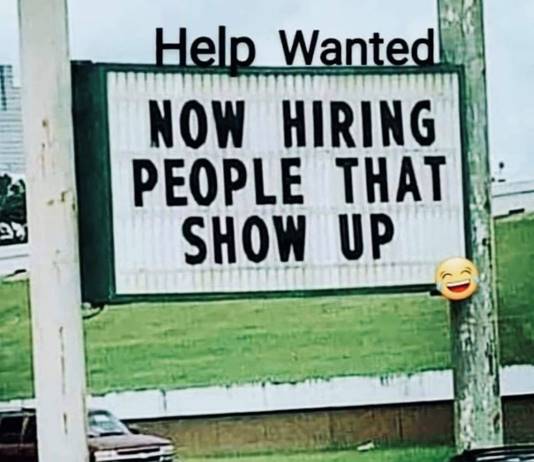