TO LONDON'S UNIVERSITY HOSPITAL AND BACK

All three of us in the Jeep on this beautifully sunny Monday morning heading for London's University Hospital.  We rolled out our driveway at 9 a.m. sharp and pulled up to the hospital's main entrance 65 minutes later.  Roads were bare and dry all the way there and Kelly was well on time for her ultra-sound appointment at 10:30.  After dropping Kelly off, Pheebs and I headed north out of London a few miles and turned left onto a gravely country road.  We didn't go too far like other times but we did enjoy some new scenery and made a pit stop for Pheebs before heading back into London. 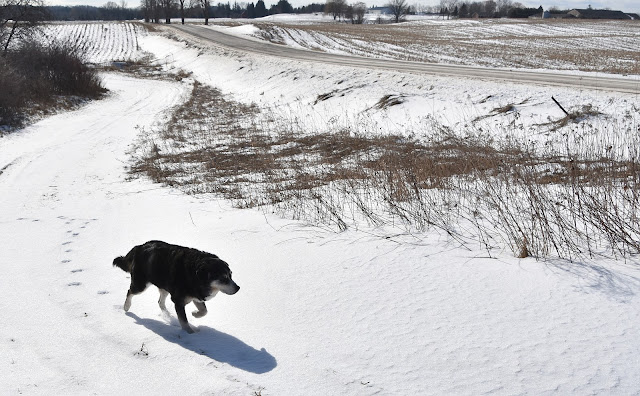 We went to our favorite parking lot at the south end of the Masonville Mall and parked the Jeep waiting for Kelly to call and say she was ready to be picked up.  The phone didn't ring so after a while Pheebs and I drove over to the hospital and found a parking spot not far from the main entrance.  Finally, the cell phone rang and we spotted Kelly less than a minute later.  She had decided to get some blood work done while there so that had taken her longer. 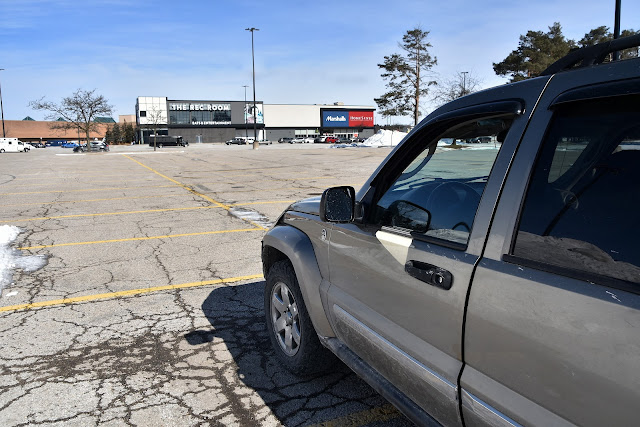 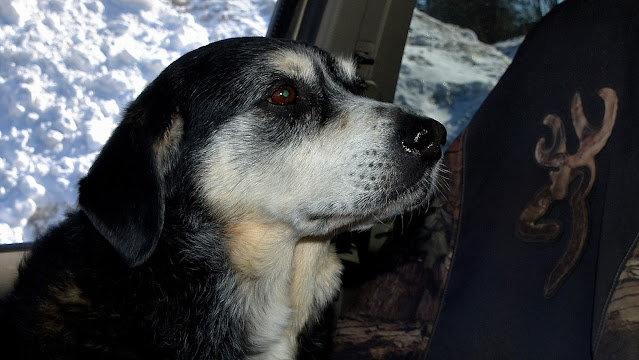 From London, we headed towards home with a stop at Tim Hortons in Lucan Ontario for coffee and a couple sandwiches to go.  Kelly had picked up a few timbits as well and asked if I would like one and of course, I said yes.  From the back seat she passed me up a timbit but it never made it to my mouth.  The pass was intercepted on the 30-yard line by a certain furry little dog who quickly grabbed and consumed my timbit!!  Sunday morning Pheebs and I pulled into Goderich's Walmart whereupon I slipped in and picked up a prescription at the Pharmacy.  Prior to arriving there I had put a couple doggy treats on my lap for Pheebs and forgot them.  They had slid off my lap and gone down between the seats.  While inside Walmart Pheebs had smelled those treats and gone rooting for them.  I had left my half-full cup of McDonald's coffee in the cup holder beside the seat and when I came back from inside, that coffee cup was upside down on the passenger seat with not a drop of coffee left in it.  Needless to say, when we got home I had to brew me up a fresh new cup of coffee!!We ended the day under a cloud cover.  Checking the 14-day weather forecast I see a warming trend beginning Saturday and lasting for the next 8+ days.  And hey, tomorrow is the first day of March already:))GROANER'S CORNER:(( This preacher was looking for a good used lawnmower one day. He found one at a yard sale that Little Johnny happened to be manning.  "This mower work, son?" the preacher asked.  Little Johnny said, "Sure does...just pull on the cord hard, though."  The preacher took the mower home and when he got ready to mow he yanked and pulled and tugged on that cord. Nothing worked. It wouldn't start.  Thinking he'd been swindled, he took the mower back to Little Johnny's house. "You said this would work if I pulled on the cord hard enough."  "Well," Johnny said, "you need to cuss at it sometimes."  The preacher was aghast. "I've not done that in years!"  "Just keep yanking on that cord, Preacher. It'll come back to you." 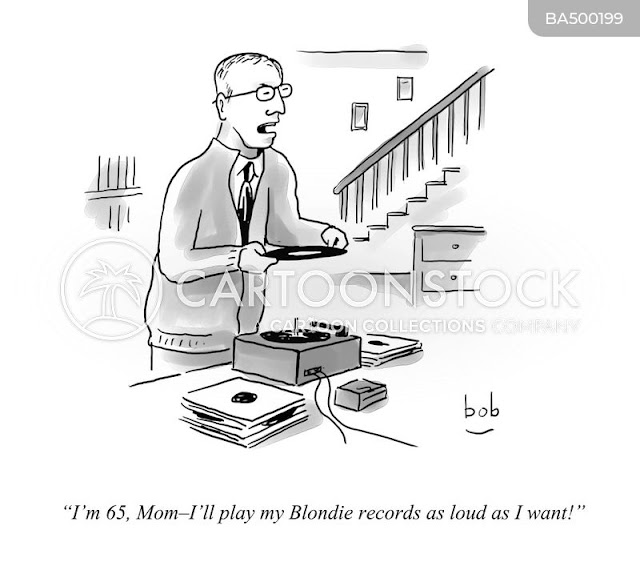