TOMORROW I MAY TACKLE THE REST OF THE RV 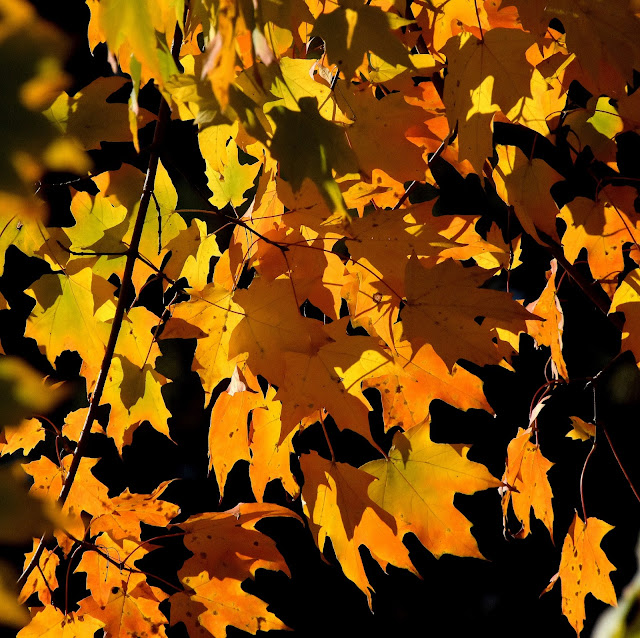 A cool 39F when we headed out on another beautiful October morning under clear blue skies again.  With things to do we headed home after our walk.  Raked up more pine needles then decided to tackle the RV.  The awning on our rig is not enclosed in a protective plastic cover so when it rains water seeps into the awning and that sets the stage for mold.  I had noticed some of that mold taking hold along the top nearest the coach so I hauled out my big ladder, some cleaning supplies, and got to work scrubbing.  Finishing that without falling off the ladder I decided to go ahead and clean the back of the rig as well. It wasn't long and I soon had that all washed and scrubbed down too.  I could see the front cap over the cab also needed some attention so I set about cleaning that too.  I like it when I get these little cleaning bees going on.  Tomorrow I may tackle the rest of the RV.  Yes, I know I've had all summer to do this but I had to wait for the right moment to come along and inspire me to get at it.  I guess that right moment came today.  I hope it comes back tomorrow. 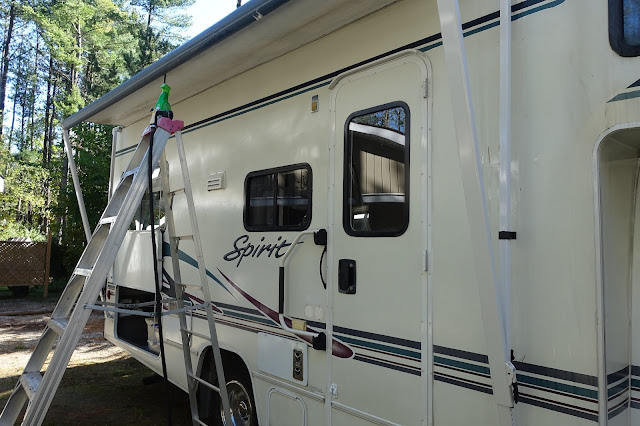 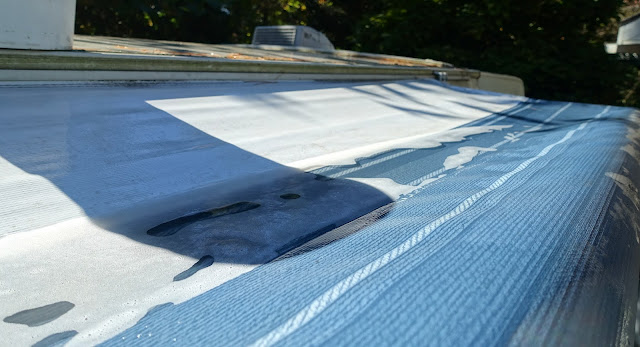 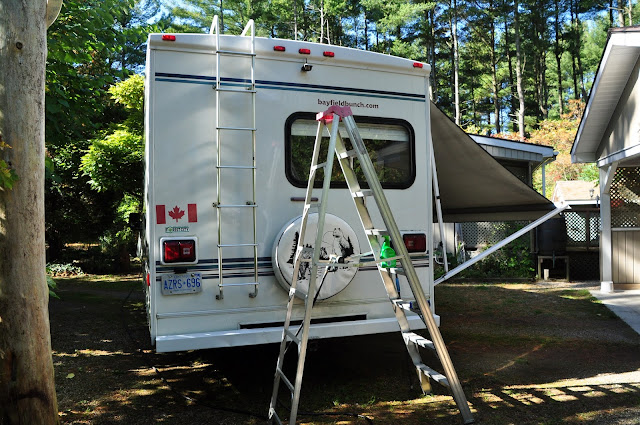 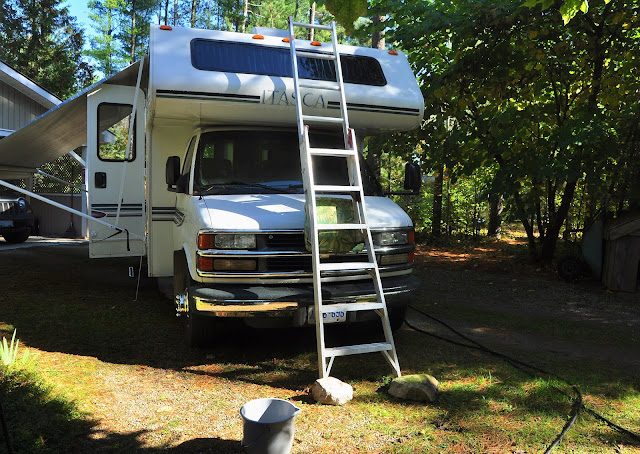 Thanks to our friends and fellow RV Blogging Bayfield friends, Gord and Cathie for a comment suggestion in my blog a couple days ago regarding my half-broken one-cup coffee maker.  Gord suggested pouring a mixture of vinegar and water through it several times to see if it would fix the problem.  Happy to say it did:))))))  I had heard of that vinegar solution before but as so often happens these days, my mind failed to dig that thought out of my brain's memory files for me.  And to the person who bought the last Walmart one cup coffee maker before I got to the store the other day, I say thank you, and na-na-na-na-na-na. 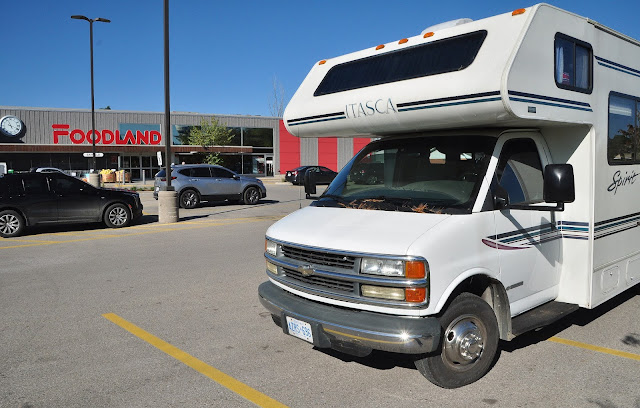 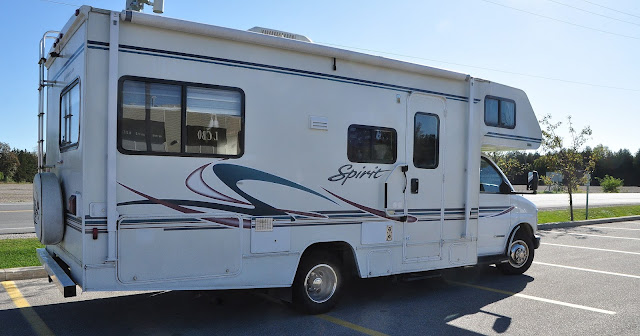 As always on this date of October 19th, I include something in my blog that took place 42 years ago and played a significant role in turning my life around.  I wrote the following post in 2009....One Day At A TimeGROANER'S CORNER:((   A guy named Bob receives a free ticket to the Superbowl from his company.  Unfortunately, when Bob arrives at the stadium he realizes the seat is in the last row in the corner of the stadium -- he is closer to the Goodyear Blimp than the field.  About halfway through the first quarter, Bob notices an empty seat 10 rows off the field right on the 50-yard line. He decides to take a chance and makes his way through the stadium and around the security guards to the empty seat.  As he sits down, he asks the gentleman sitting next to him, "Excuse me, is anyone sitting here?" The man says no.  Now, very excited to be in such a great seat for the game, Bob again inquires of the man next to him, "This is incredible! Who in their right mind would have a seat like this at the Superbowl and not use it?"  The man replies, "Well actually, the seat belongs to me, I was supposed to come with my wife, but she passed away. This is the first Superbowl we haven't been to together since we got married in 1967."  "Well, that's really sad," says Bob, "but still, couldn't you find someone to take the seat? A relative or a close friend?"  "No," the man replies, "they're all at the funeral." 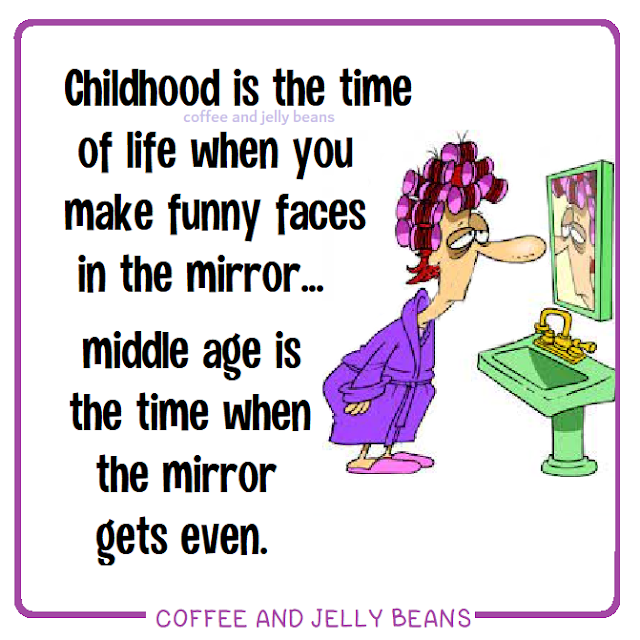 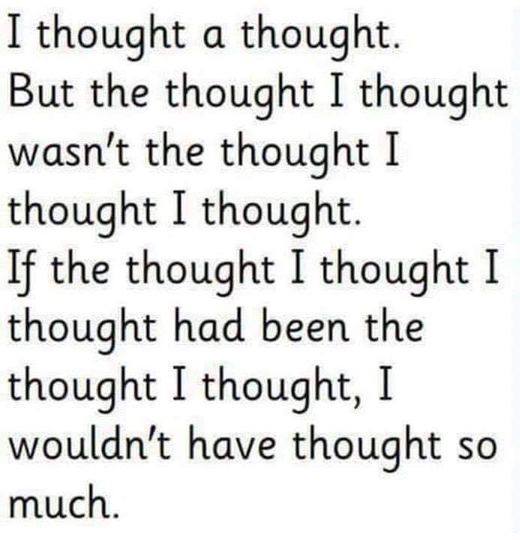 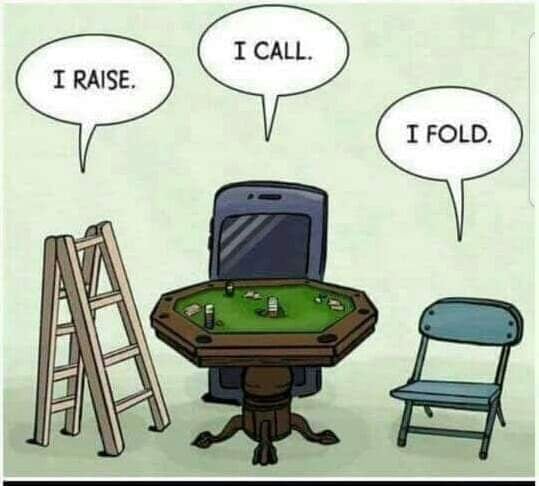