OR MAYBE IT'S JUST SOMETHING SIMPLE LIKE THE EARTH SPEEDING UP

A sunny and start to our day with 45F temps earlier this morning.  I sure am appreciating these cooler days compared to the heat and humidity a week or so ago.  I'm also back into morning T-shirts, long sleeve shirts, and lite jackets.  And that's all fine with me.  Still no swarms of bugs or miserable Mosquitos in the air.  Most unusual for this time of year.  I think we got up into the mid 60's today.  Perfect:))With Kelly still in Covid quarantine until Saturday I've been the 'go-to' guy for groceries and things.  With me being the main consumer of milk and orange juice those are the main two items I mainly go shopping for.  Before the grocery run we of course took a cruise down around the harbor and out to Rotary Cove.  Two big ships in port this morning with the Algoma Sault taking on a load of salt and the Federal Hudson preparing to take on a load of grain. 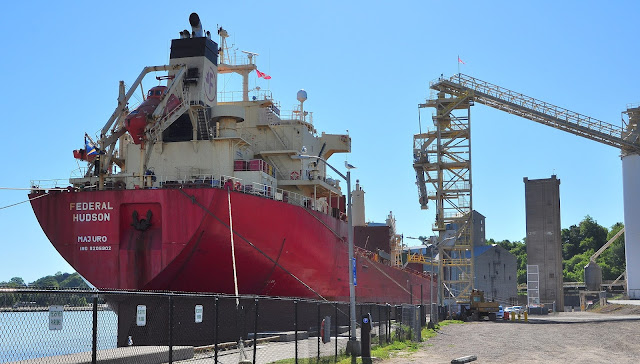 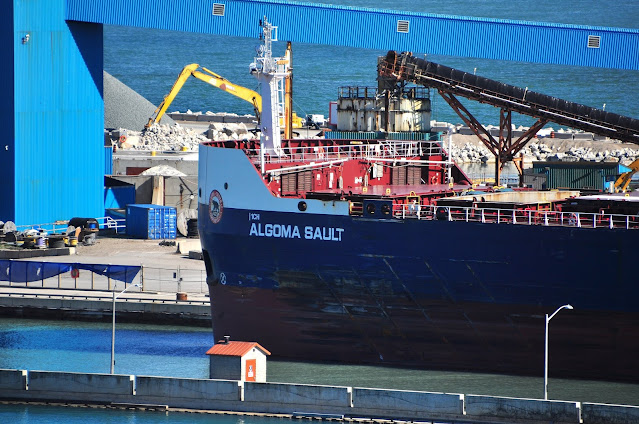 Goderich is doing a great job on their shoreline beaches, walking, and parking areas.  The dog walking area is open again after a paving operation these past few days which brought new pavement right up to the trailhead.  The parking area has been expanded and the paving company has done a great job. 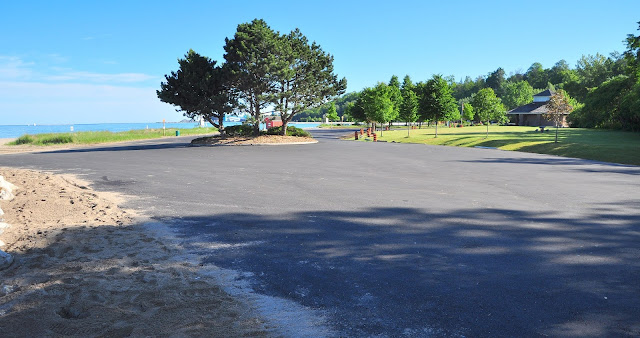 I think the 'Iron Rangers' are in force now so I didn't stray far from the Jeep in case someone swooped in and stuck a parking ticket under my wipers.  While at the dog walking area I noticed an odd-looking boat or ship heading into Goderich's harbor.  Turns out it was a tug boat I have never seen before pushing a long barge sort of thing in front of it.  They must have gone around the north side of the Salt Mine because it disappeared from view.

Home again I hitched up our utility trailer fully loaded with Tuesday's shrub and tree trimmings and hauled it all down to our Park's recycling area.  That old used homemade trailer certainly has paid for itself since we bought it nearly 19 years ago in preparation for our move from the old weenie roast ranch near Fullarton Ontario to where we are now.Well, here we are well into the third week of June already.  In a matter of days, we will experience the longest day of the year with only 6 months left until the shortest day of the year.  Where is all this time going and why does it seem to be going so fast.  Is this what happens when one enters into these unwelcome and sometimes difficult Senior years.  Or maybe it's just something simple like the Earth speeding up. 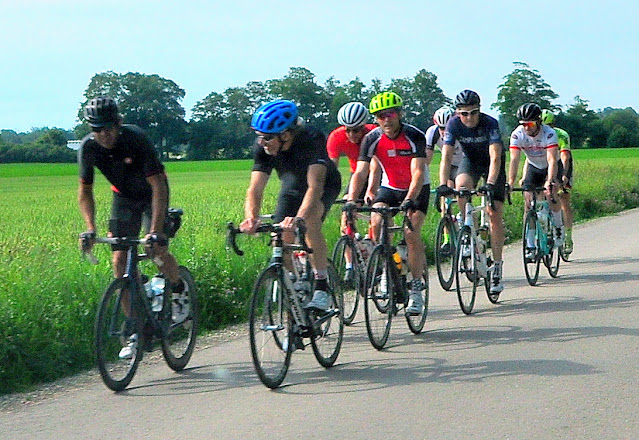 Just finished another very interesting book.  Incident At Devil's Den by Terry Lovelace was a riveting read and like so many of the books I have read lately it leaves the reader asking far more questions than there seem to be answers for.  In conjunction with many other books on this subject, I found his story believable.  And here's an interesting article on all this with a slightly different twist and a warning.  Contacting Aliens Could Be Dangerous  Of particular interest is the comments at the end of this article.GROANER'S CORNER:((    An Octogenarian moved to a new town and joined the local Country Club. He went to the Club for the first time to play but was told everyone scheduled to play was already out on the course. He was so disappointed, the Assistant Pro said he would play with him and would give him a 12 stroke handicap.  The 80-year-old said, "I really don't need a handicap. The only real problem I have is getting out of sand traps."  They both played well. Coming into the par-three 18th they were even. The pro had a nice drive to mid-fairway and would be able to get on the green with the next stroke and then putt for a par with the following play.  The old man hit a long drive, and the ball landed in one of the two sand traps around the hole. Shooting from the sand trap on his second stroke, he hit a high ball which landed on the green and rolled right into the hole!  The Assistant Pro was stunned. "Nice shot, but I thought you said you have a problem getting out of sand traps."  "I do," replied the octogenarian. "Give me a hand to get out of this sand trap will ya." 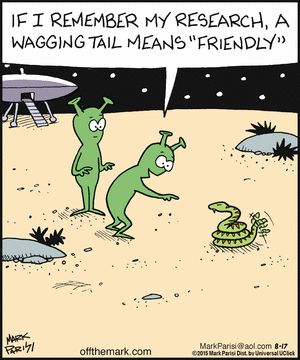 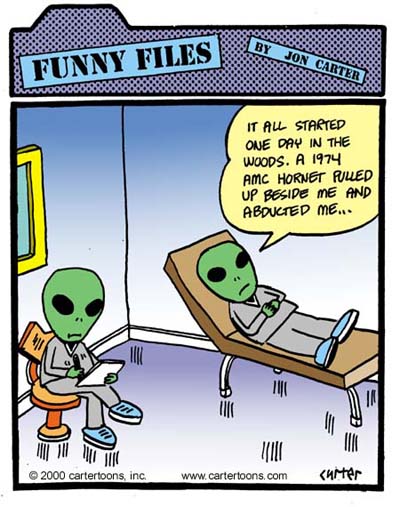