A cloud cover rolled in Wednesday evening, stayed all night, and hung around for a while Thursday morning before partially dissipating.  Temps were fine with me early on but by noon the muggy humidity had built up and that was the end for me being outside.  Pheebs and I did try a walk later this afternoon but she just dragged along behind me and I didn't do much better.  She doesn't like this heat and humidity any more than I do.  I think we exceeded 80F again today.'  I'm looking forward to next week's mid 60's. 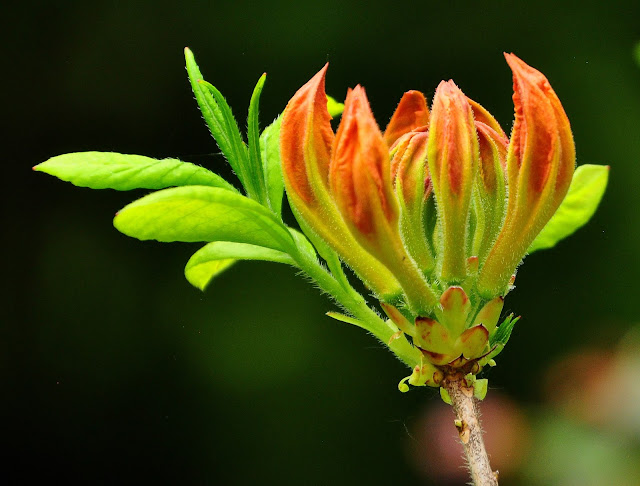 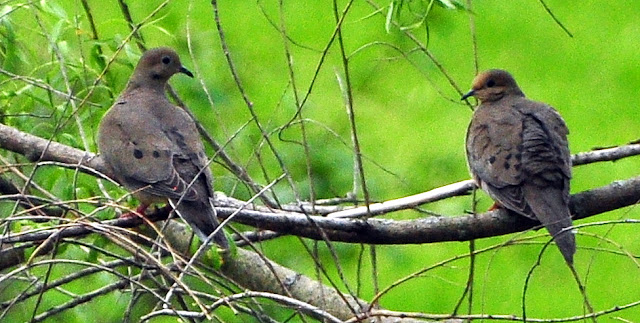 Thought we'd drive by the Eagles nest south of Bayfield this morning and see if we could see anything going on.  It looked to me to be two young Eagles in the nest.  Coming down the road I saw one of them standing up flexing its wings before sitting back down in the nest again.  Below are a few pics I managed to scrabble together with my Nikon CP900.  Wished I had better lighting for these photos but because of the location, it is what it is. 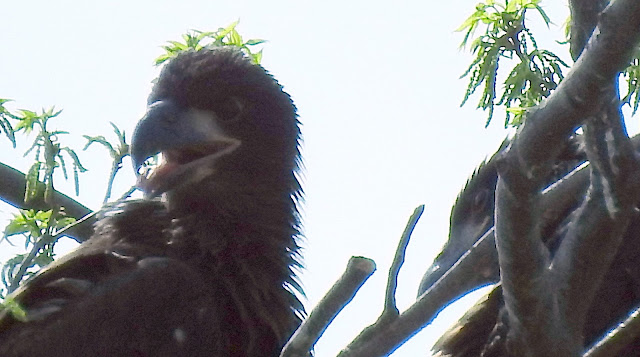 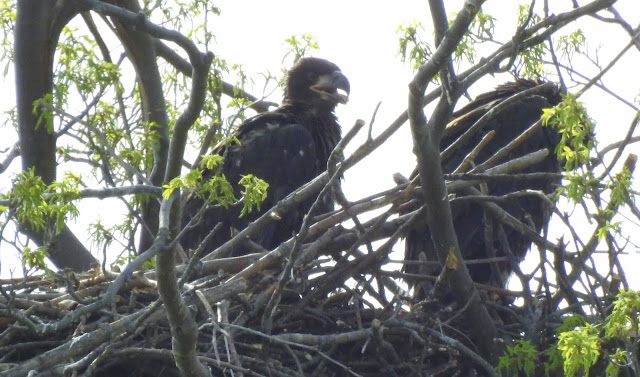 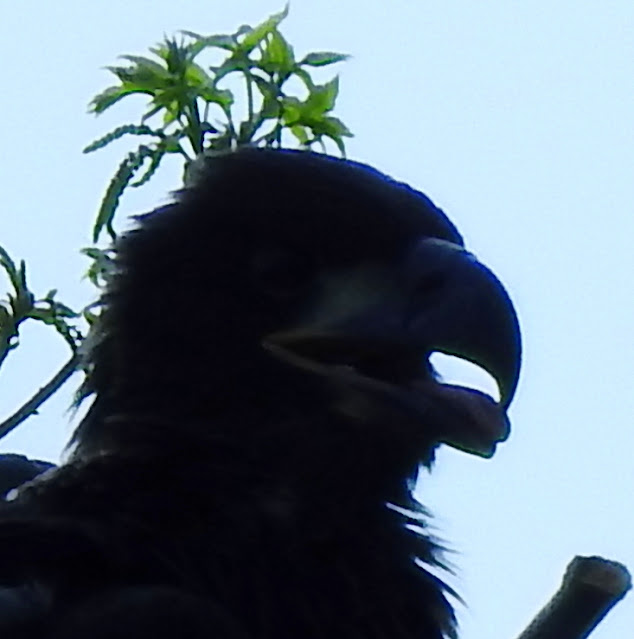 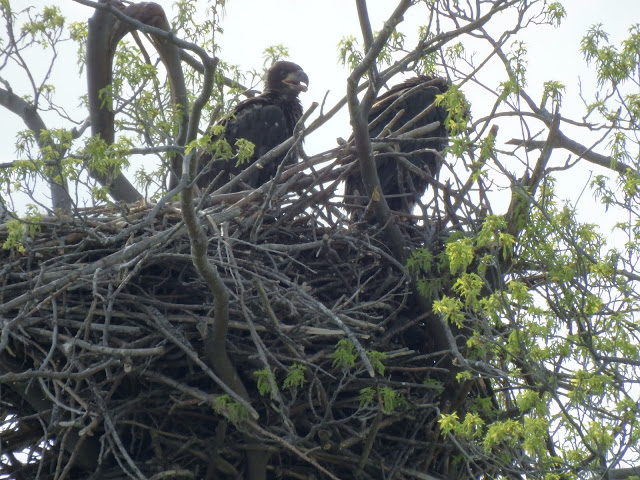 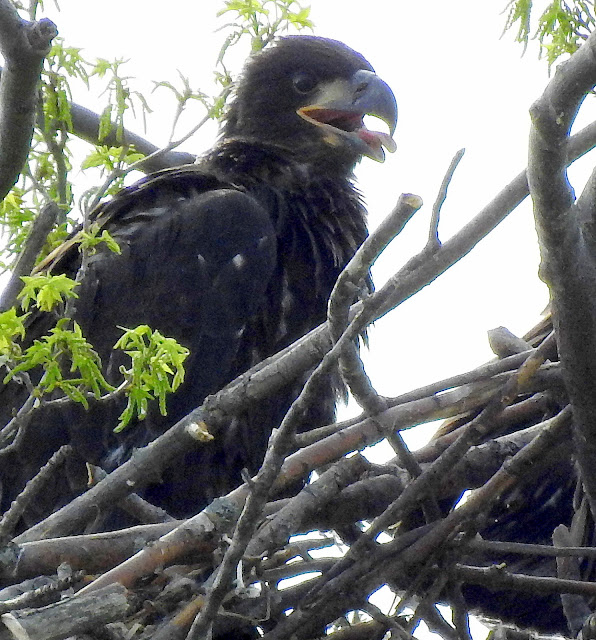 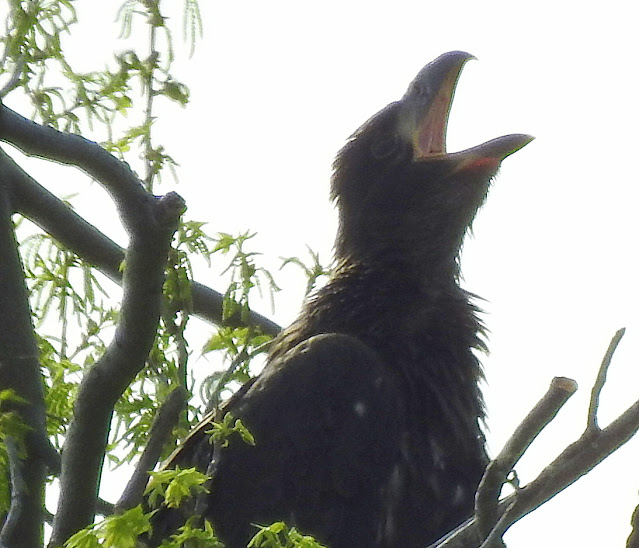 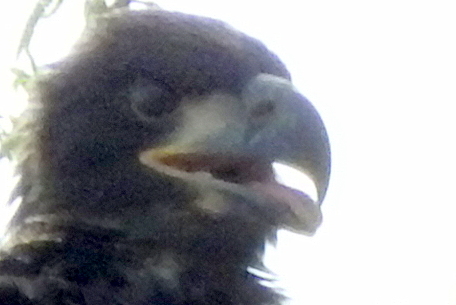 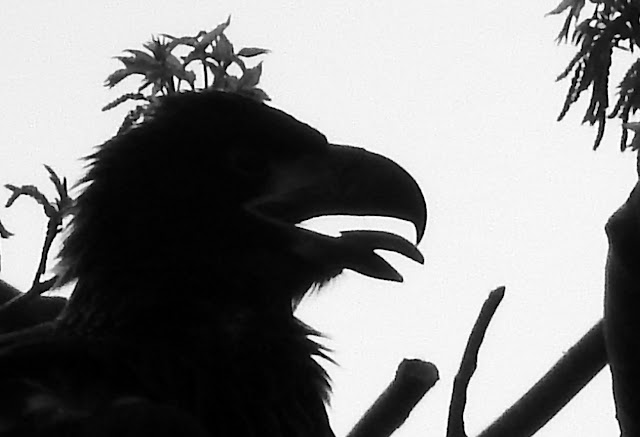 A few hundred yards east of the Eagles nest on Blue Bluff road is a farmer's lane on the south side leading into a forest.  Pheebs and stopped here about a month ago so I decided to stop again this morning and take another walk.  The lane doesn't go far before opening into a couple fields but it's a nice easy walk through a beautiful hardwood forest. 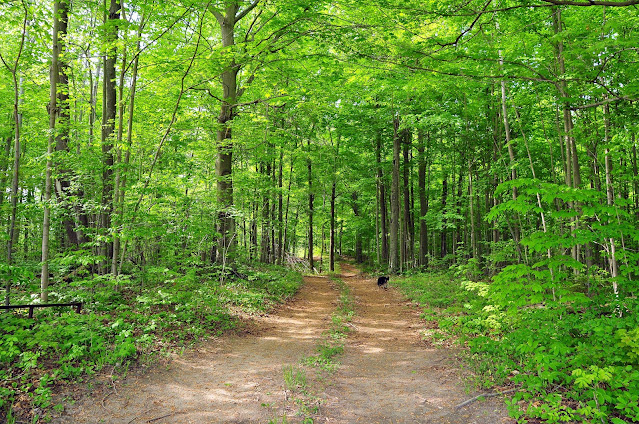 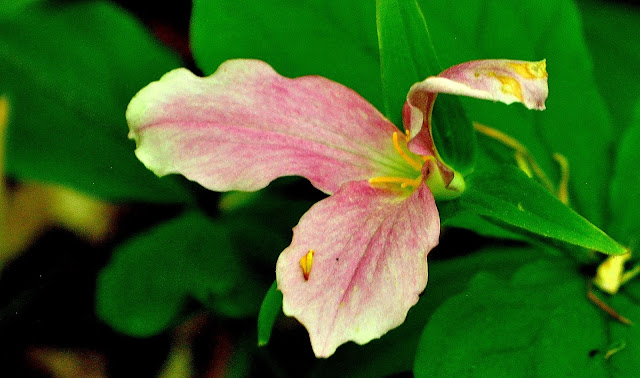 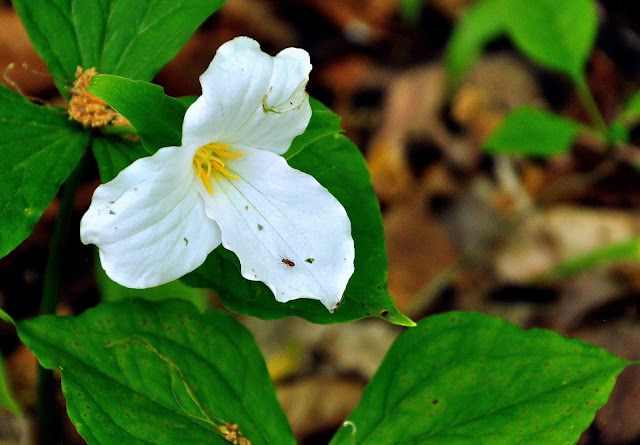 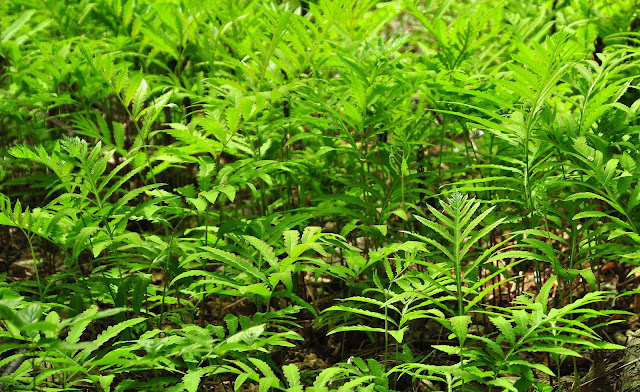 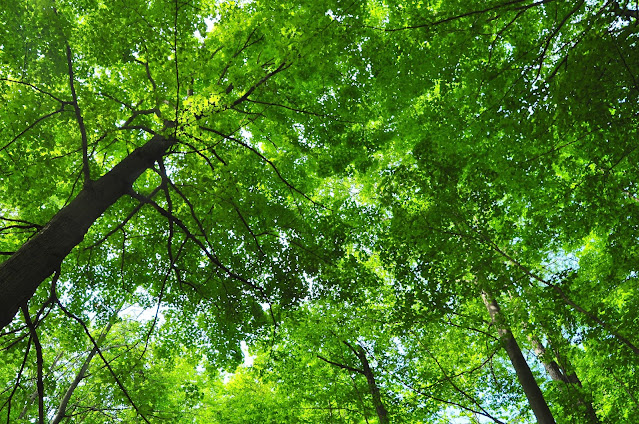 After returning to the Jeep I decided to save some gas and simply head on home.  Temps were coming up and it was getting too muggy for us guys anyway. 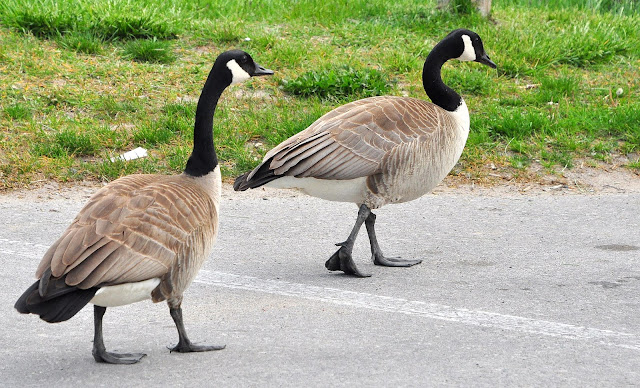 The only constructive thing I was able to accomplish for the rest of the morning was another cheese Omelette.  And I even boiled up some bacon this time.  I have a feeling if I keep this up I'm going to have neighbors following their noses to our house and coming to the door wanting me to come over to their place and make breakfast for them.  I might just have to go back to my olfactory no nose revealing peanut butter and honey sandwiches. 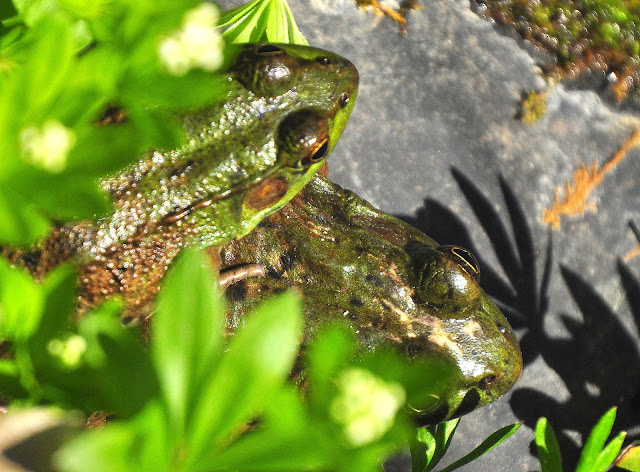 Facebook threw me a memory for this day back on May 20th, 2009 entitled Happy Motoring Amigo.  It's my take on my 'driving jobs' over the years.  And I noticed on the day before, I wrote an inspiring one-paragraph post called Do It While You Can.  I really do need to pay closer attention to my own advice.Kelly, her sister Kathy, and their Mom all went out to one of their Mother's favorite places for lunch today.  Hurd's Orchards in Holley NY not too far from Spencerport.  I was there one time about 5 years ago and it's a really nice homey atmosphere.  Below is a photo Kelly sent from their outing today.  And here are Kelly's words describing their day.....Every spring for quite a few years my Mom has taken us to Hurd Orchards for lunch. We weren't sure we would make it there this year after her heart attack. But she was determined. A beautiful setting in an old barn in the orchard. 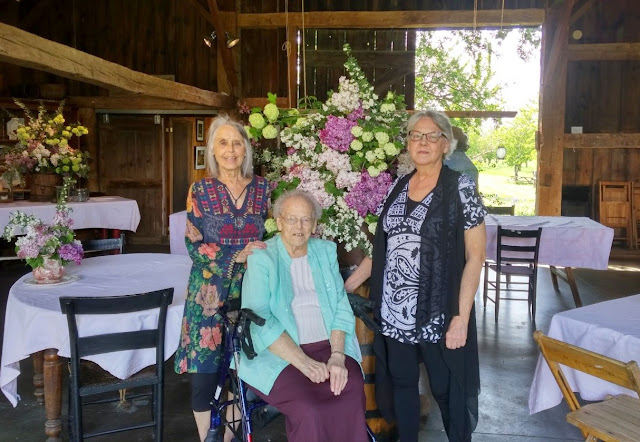 Just finished my latest research book on the UFO-UAP Extraterrestrial phenomenon.  Extraterrestrial Encounters Of The Extraordinary Kind by Betsey Lewis.  Yet another very revealing book about a topic that has for too long been ignored, scoffed at, or not taken seriously.  Still wondering about Roswell??  Check out this story by WW2 ace fighter pilot, Marine Lieutenant Colonel Marion M. "Black Mac" Magruder.  I see no reason to doubt the honesty and integrity of people like this and I have now read countless similar accounts about credible people from many walks of life.  My search for answers and the truth continues..........My next read will be UFOs: Interplanetary Visitors.GROANER'S CORNER:(( A little known fact is that while Jews make up about 2% of the U.S. population, there was a time when they made up 50% of the famous Comedians. (According to a  UC Berkeley Professor who studies humour).

You may remember the old Jewish Catskill Comics of Vaudeville days:

Shecky Greene, Red Buttons,
Totie Fields, Joey Bishop,
Milton Berle, Jan Murray,
Danny Kaye, Henny Youngman,
Buddy Hackett, Sid Caesar,
Groucho Marx, Jackie Mason,
Woody Allen, Lenny Bruce,
George Burns, Allan Sherman,
Jerry Lewis, Carl Reiner,
Shelley Berman, Gene Wilder,
George Jessel, Alan King,
Mel Brooks, Phil Silvers,
Jack Carter, Rodney Dangerfield,
Don Rickles, Jack Benny,
Mansel Rubenstein   and so many others.
'There was not one single swear word in their comedy'.
Here are a few examples:
* I just got back from a pleasure trip.  I took my mother-in-law to the airport.
* I've been in love with the same woman for 49 years!  If my wife ever finds out, she'll kill me!
* What are three words a woman never wants to hear when she's making love? “Honey, I'm home!"
* Someone stole all my credit cards, but I won't be reporting it.  The thief spends less than my wife did.
* We always hold hands.  If I let go, she shops.
* My wife and I went back to the hotel where we spent our wedding night.  Only this time I stayed in the bathroom and cried.
* My wife and I went to a hotel where we got a waterbed.  My wife called it the Dead Sea.
* She was at the beauty shop for two hours.  That was only for the estimate.  She got a mudpack and looked great for two days.  Then the mud fell off.
* The Doctor gave a man six months to live.  The man couldn't pay his bill, so the doctor gave him another six months.
* The Doctor called Mrs. Cohen saying, "Mrs. Cohen, your check came back."  Mrs. Cohen answered, "So did my arthritis!"
* Doctor: "You'll live to be 60!"  Patient: "I am 60!"  Doctor: "See! What did I tell you?"
* Patient: "I have a ringing in my ears."  Doctor: "Don't answer it!"
* A drunk was in front of a judge.  The judge says, "You've been brought here for drinking."  The drunk says "Okay, let's get started."
* Why do Jewish divorces cost so much?  They're worth it.
* The Harvard School of Medicine did a study of why Jewish women like Chinese food so much.  The study revealed that this is due to the fact that Won Ton spelled backward is Not Now.
*There is a big controversy on the Jewish view of when life begins.  In Jewish tradition, the fetus is not considered viable until it graduates from medical school.
========================= 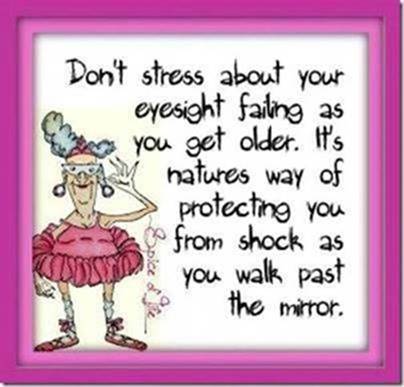 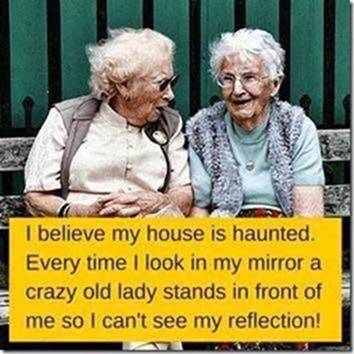