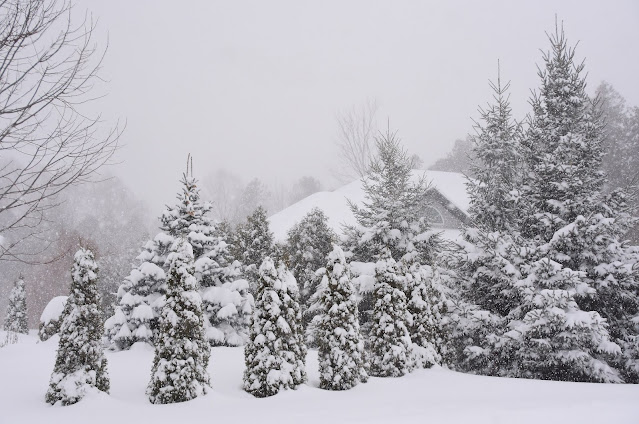 Checking Thursday night's live radar cam around 10 p.m. I saw a long snow-filled snow streamer coming in off Lake Huron right over Bayfield.  Well, that streamer kept up all night and most of this morning dumping at least a couple of feet of snow on us.  Before Pheebs and I headed for the Jeep I welded myself to the end of my snow shovel and began shoveling.  Cleared a path to the bird feeders and re-stocked them.  With that done, and the Jeep in 4-wheel drive, Pheebs and plowed our way out the driveway and headed for Bayfield. 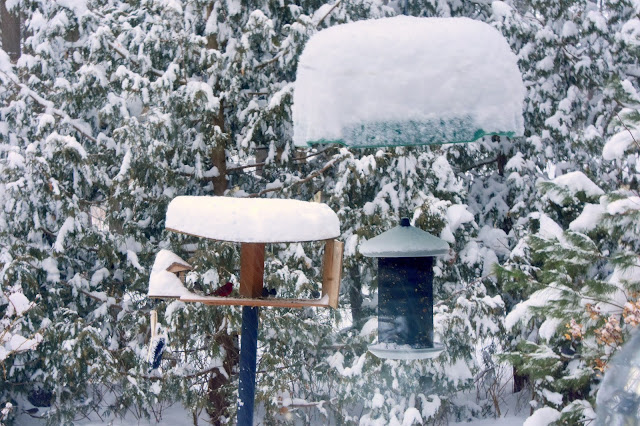 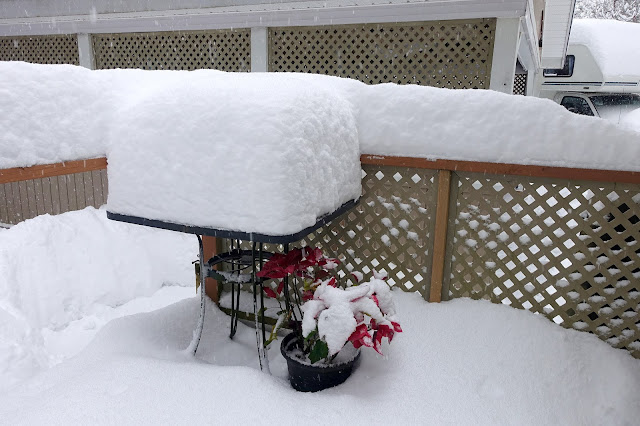 Snowing heavily we made our way into town, grabbed a coffee, and took ourselves for a drive around town.  No point in heading out into the countryside because of poor visibility.  We couldn't have seen anything anyway. 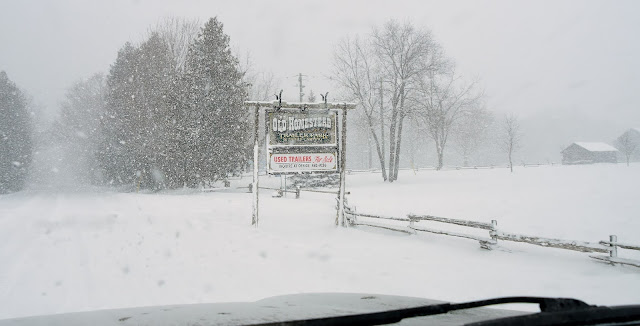 A number of snowplows, snowblowers, and people out shoveling their sidewalks and driveways.  A few people dressed up warm walking their dogs. 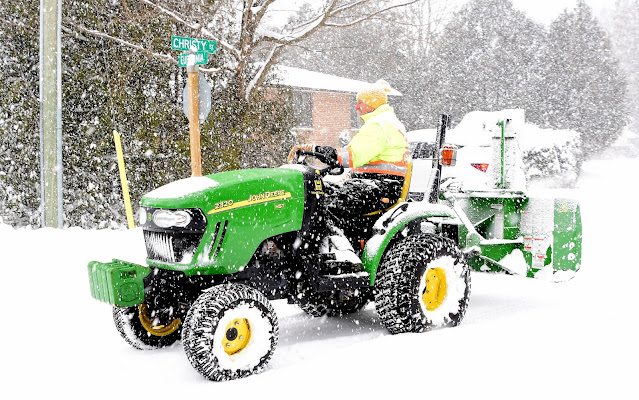 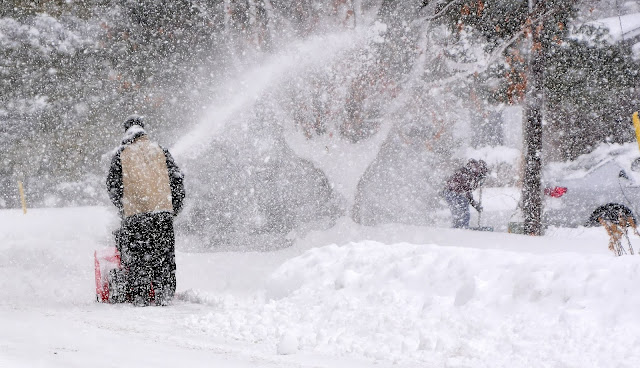 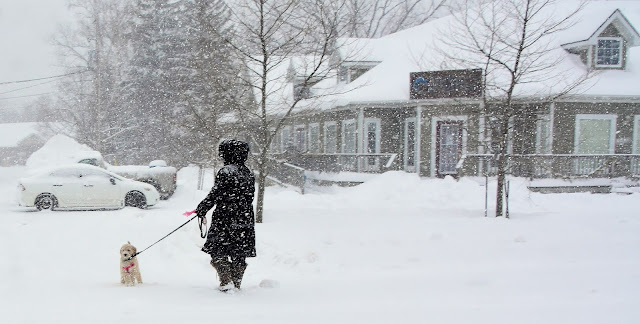 We cruised around town taking a few photos for about forty minutes before heading home.   All of the houses below were on one of Bayfield's older picturesque streets adjacent to Pioneer Park.  Most of the time we were out for our Jeep ride it was snowing heavily so I figured I had better get on home and park myself on the end of my snow shovel. 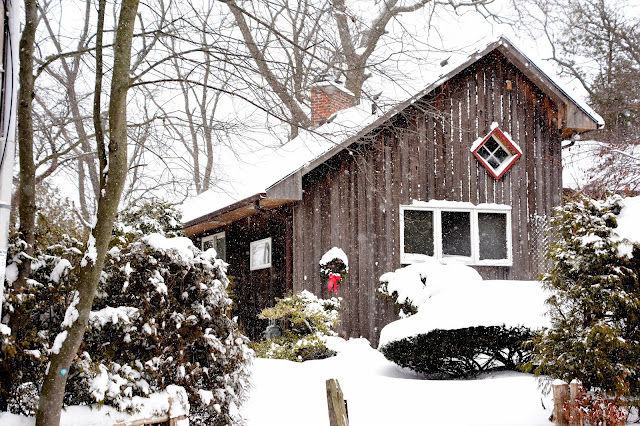 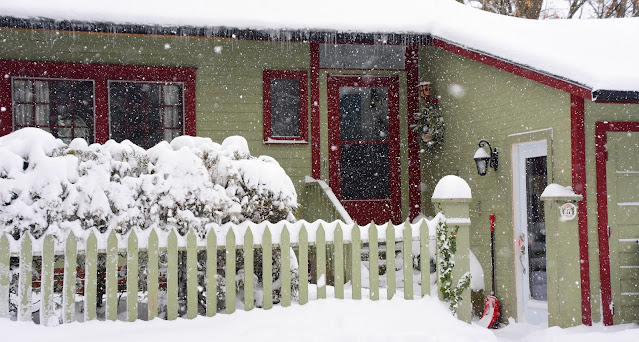 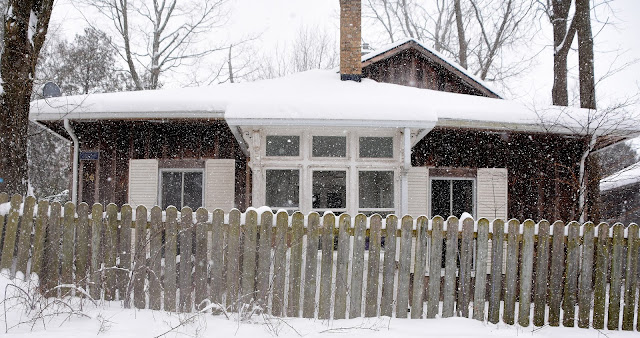 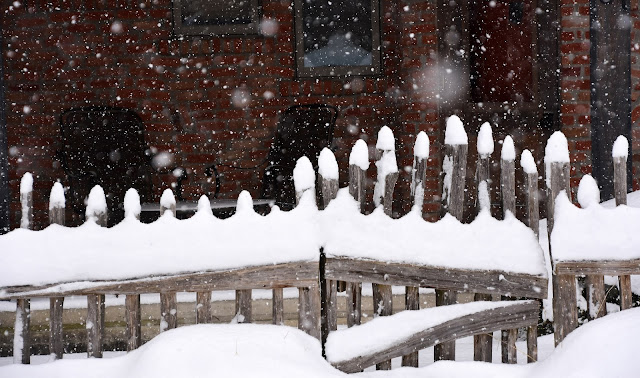 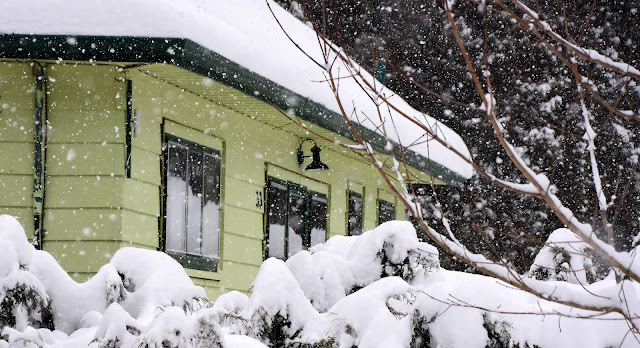 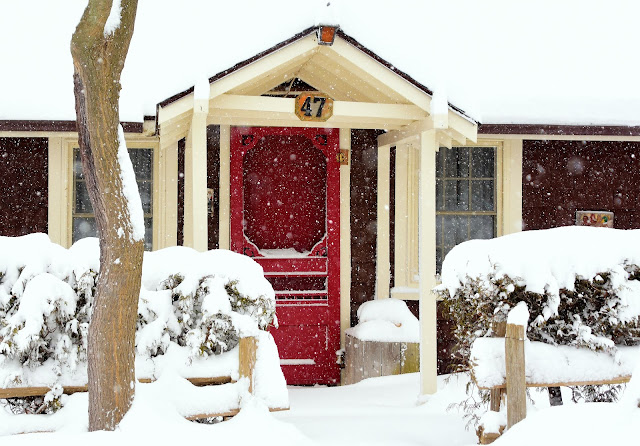 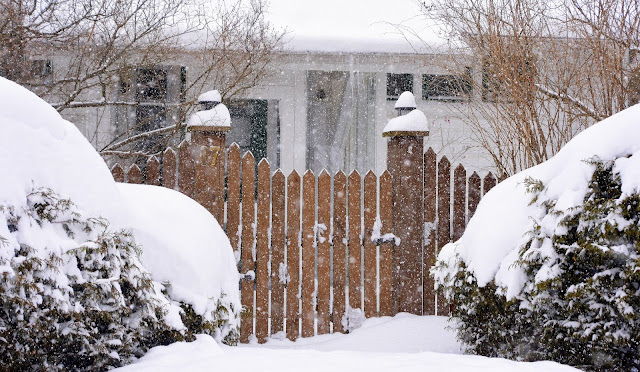 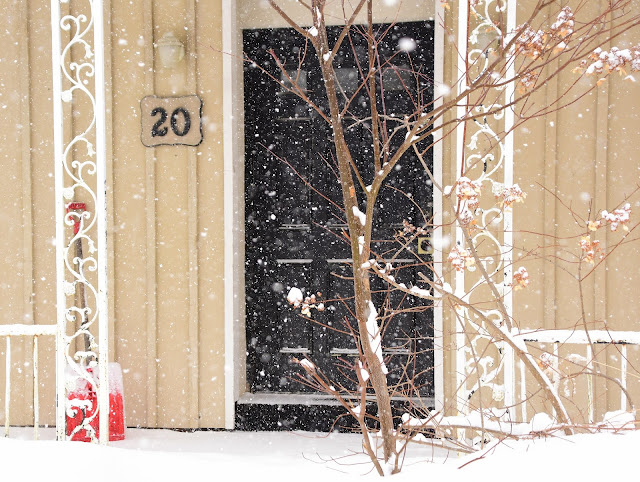 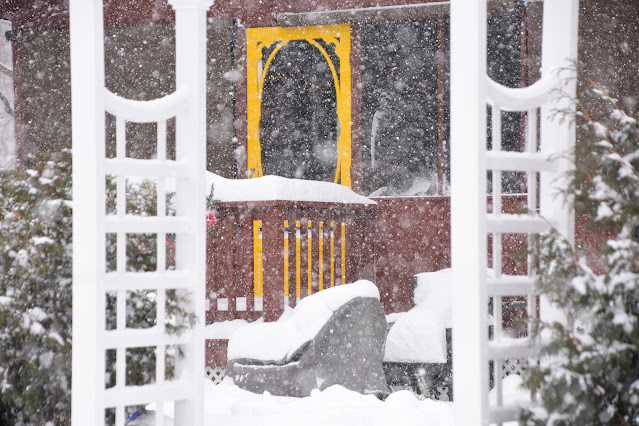 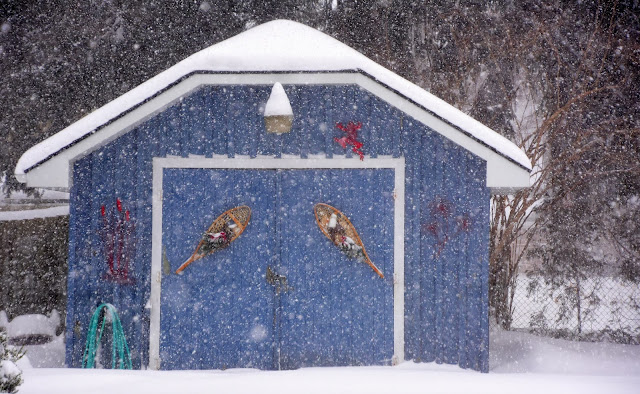 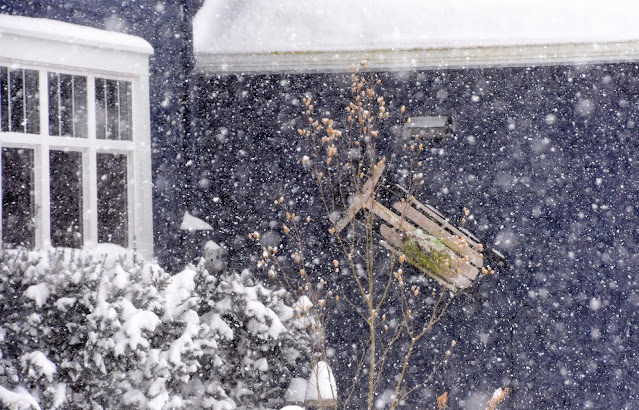 Home again, I had to get back onto the end of my snow shovel and start all over again clearing my paths.  That took me about half an hour and it was a lot of shoveling.  Luckily, I don't mind shoveling snow so it was no big deal for me.  Before the day was over I was back outside 3 more times keeping those paths open.  The snow just kept falling and falling.  It's easier to keep the paths cleared out than to have to start from scratch.  We sure have a lot of snow on our roof and that may present a problem later when temps warm up a bit and the light fluffy snow takes on moisture and doubles or triples in weight. 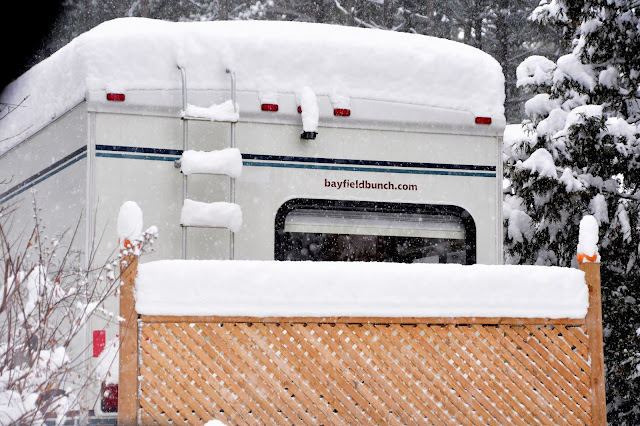 Facebook threw me a memory today and I see it was ten years ago this last week of January Kelly and I were able to lead a few members of Bisbee's Muleteam Hiking Club to a new trailhead in Arizona's Chiricahua Mountains.  Rucker Canyon TrailheadWe've all seen big wooden kegs and barrels.  Ever wonder how they are made?  Well, wonder no longer.... Barrel Making 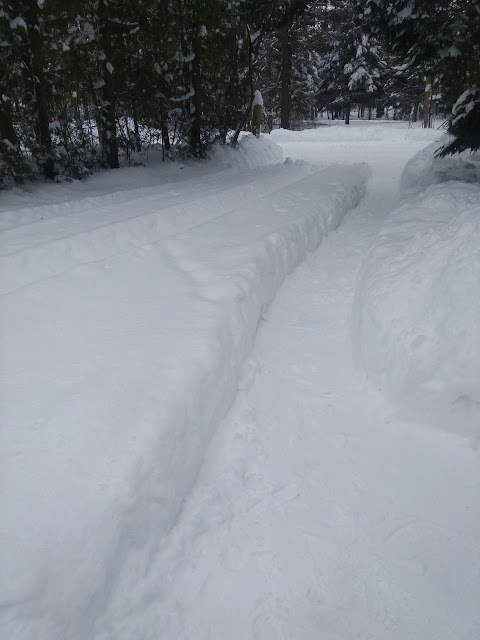 Snow finally eased up a bit sometime in the early afternoon and I was able to start shoveling out our 6 car driveway.  Didn't get it all done but I did make a bit of a dent in all the snow,  Kelly should be able to get her car out now if she gases it a bit.  Too tired for an afternoon walk but maybe Pheebs and I can do that Saturday.GROANER'S CORNER:((   The teacher was warning the class about the dangers of going out in cold weather improperly dressed.  "There was one a boy," she said, "who was so eager to go out and play with his sled that he didn't put a coat or scarf on. He caught a chill, the chill led to pneumonia... and he was sick for two weeks!"    The teacher paused to allow the moral of this story to sink in, when a small voice asked, "What happened to the sled?"

My boyfriend and I broke up.  He wanted to get married... I didn't want him to.

A hillbilly was making his first visit to a hospital where his teenage son was about to have an operation.  Watching the doctor's every move, he asked, "What's that?"  The doctor explained, "This is an anesthetic. After he gets this he won't know a thing."  "Save your time, Doc," exclaimed the man. "He don't know nuthin now." 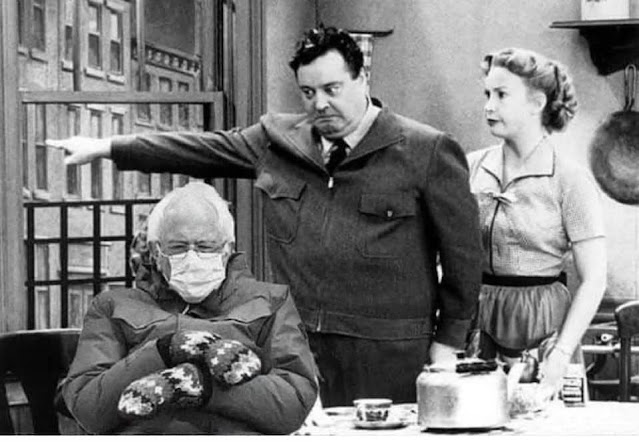 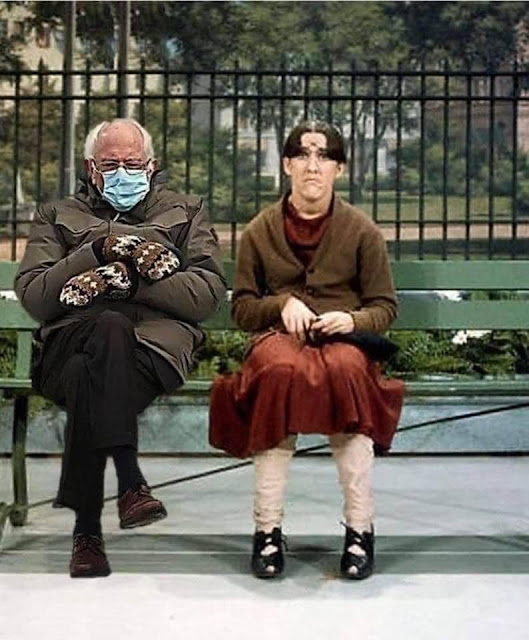