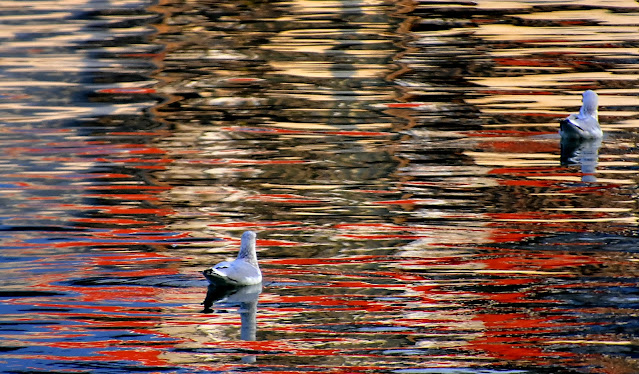 If I thought Thursday morning was really nice I obviously hadn't met Friday morning yet.  One word sums it up, 'WOW'.  What a nice boost for everyone.  Reminded me of a mid-April Spring day.  However, it is the lull before the proverbial storm with rains beginning tonight making for the possibility of rain, freezing rain, and snow, Saturday.  And with all that there will be winds to blow it all around. 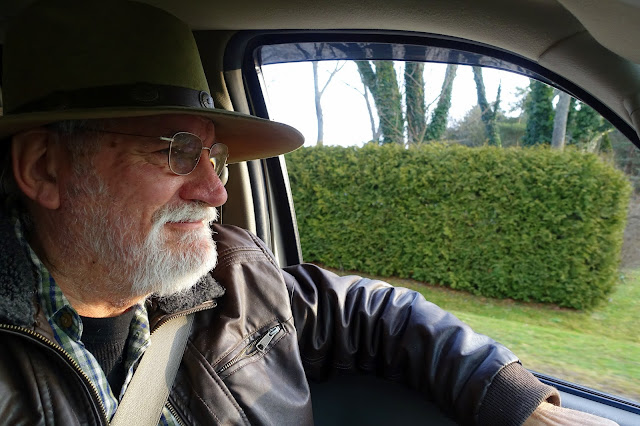 On our drive into Bayfield this morning I noticed a large barge in the river loaded up with some big boulders and an orange digging machine making the transition from solid ground onto the tippy barge.  All went well and a small tug boat was soon lashed to the barge with a number of ropes.  It was interesting to watch the boat and barge combination get underway carrying two crew members.  With the orange machine operator in the machine and the other fellow in the tugboat, the two fellas worked together to get the barge and boat moving.  With the machine operator using the machines long digging arm to push away from shore and the tugboat guy applying power to the rear of the barge they managed to make a U-turn in the river and head towards the lake.  Curious to know where these boulders were being taken I watched as they made their way through the Bayfield River channel between the south and north piers.  Once clear of the piers, the barge and boat combo turned left and headed south along the shoreline about a quarter-mile offshore.  Last I saw of them they were still heading south to probably drop those big boulders off somewhere along the eroding shoreline.  I was unable to keep them in sight so I don't know how far south they went. 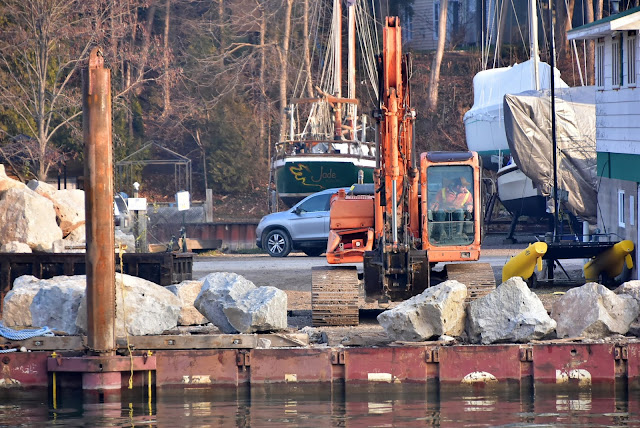 TRANSITIONG FROM SOLID GROUND TO THE TIPPY BARGE 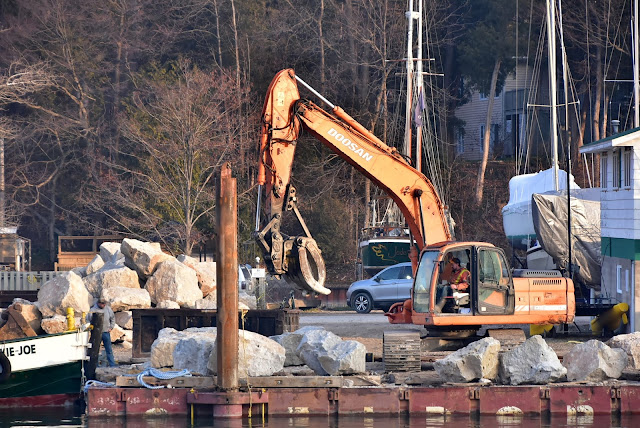 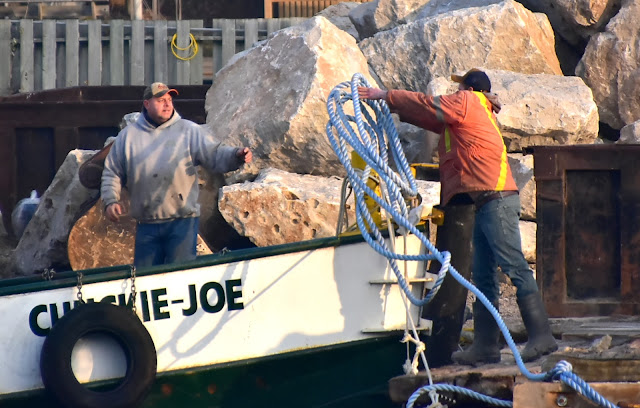 LASHING THE BARGE AND 'CHUCKIE-JOE TUGBOAT TOGETHER 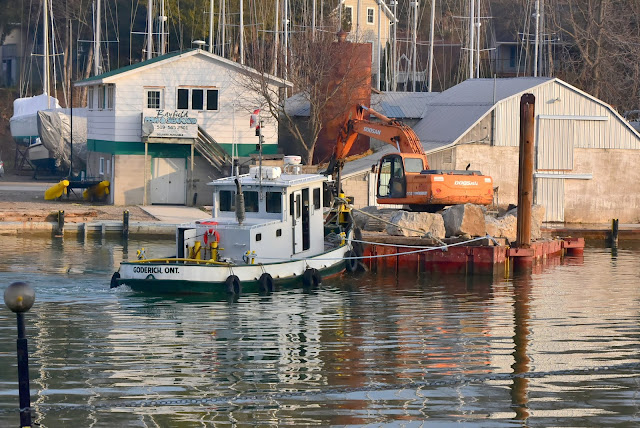 WORKING TOGETHER TO GET THE THE BARGE AND BOAT TURNED AROUND 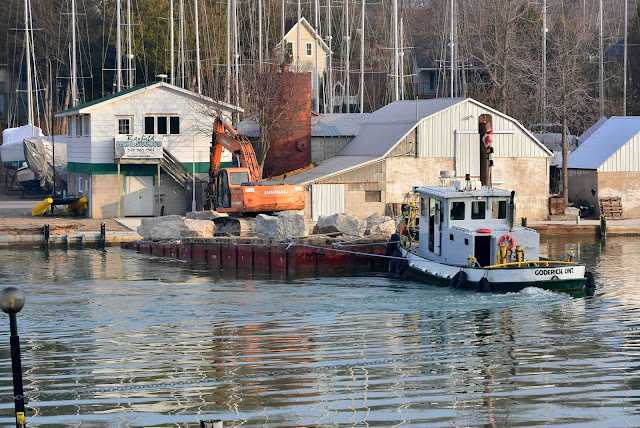 OKAY, ALL STRAIGHTENED AROUND AND READY TO GO 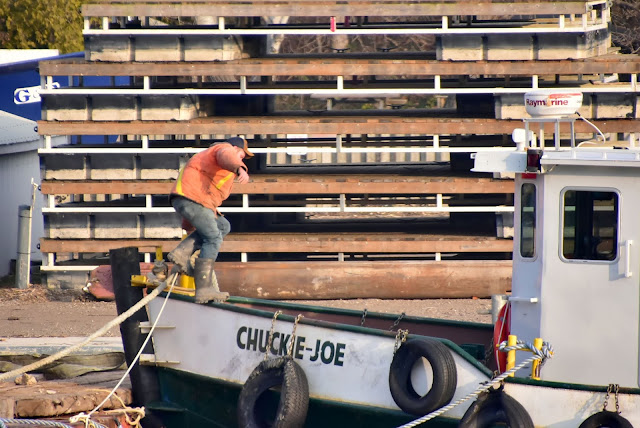 TURNING TO PORT (LEFT) AND HEADING DOWN THE LAKE 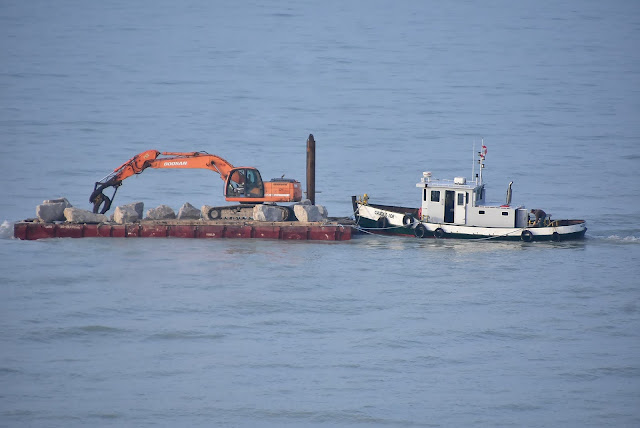 A CREWMAN ON THE STERN CHECKS SOME EQUIPMENT

Pheebs and I cruised around Bayfield for a bit then headed a short distance out into the countryside where I remembered a bush lane alongside the road.  It was a perfect morning for a walk so that is exactly what we did when we reached the lane.  I'm always curious where these bush lanes lead so after parking the Jeep alongside the road we were off.  Did I mention what a beautiful gorgeous morning it was??:)) 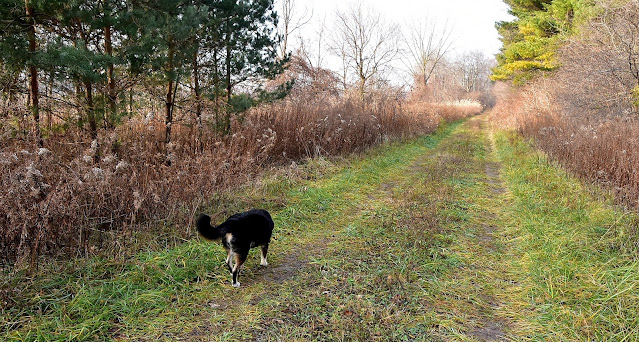 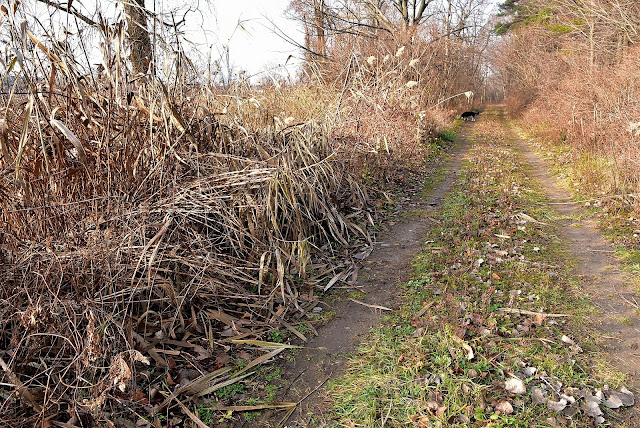 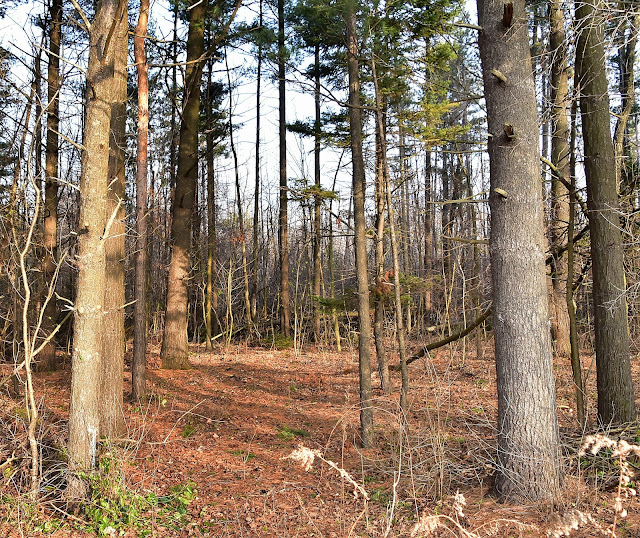 I ALWAYS FEEL BETTER WHENEVER NEAR OR IN A FOREST 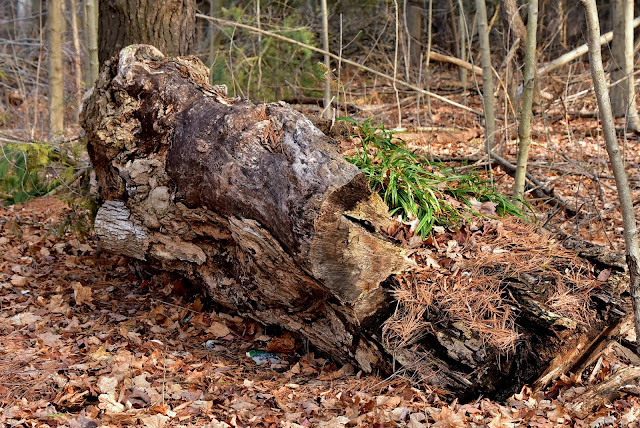 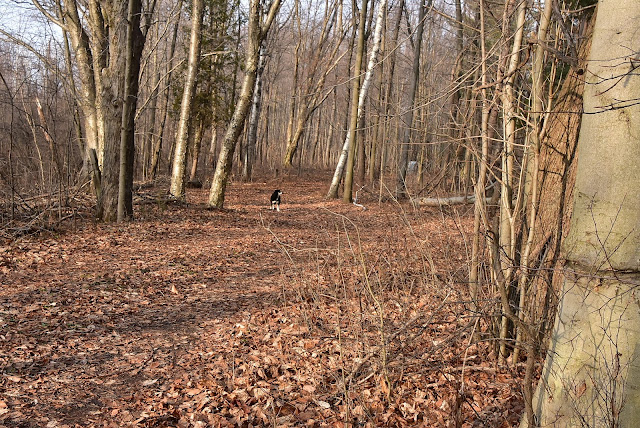 HMMMM, I THINK I SEE SOMETHING UP THERE ON THE RIGHT 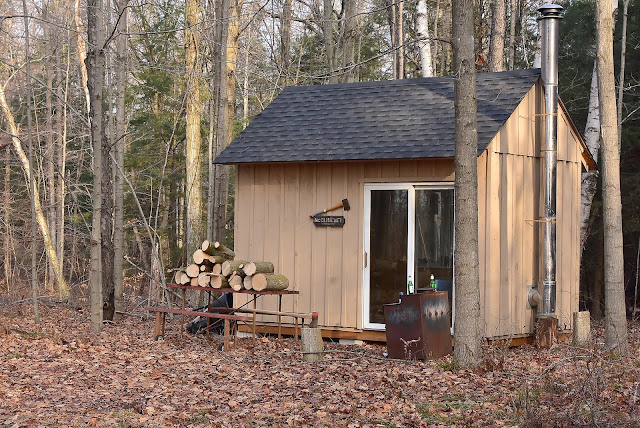 SOMEBODY SURE HAS THEMSELVES A NICE RECREATIONAL GET-AWAY AREA 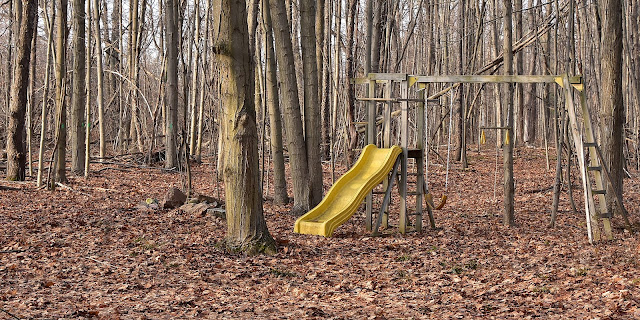 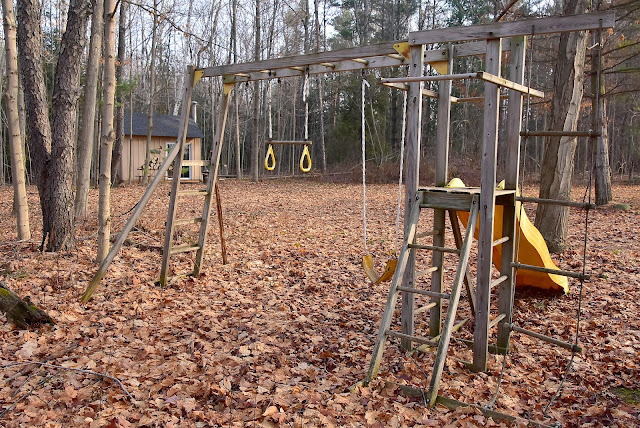 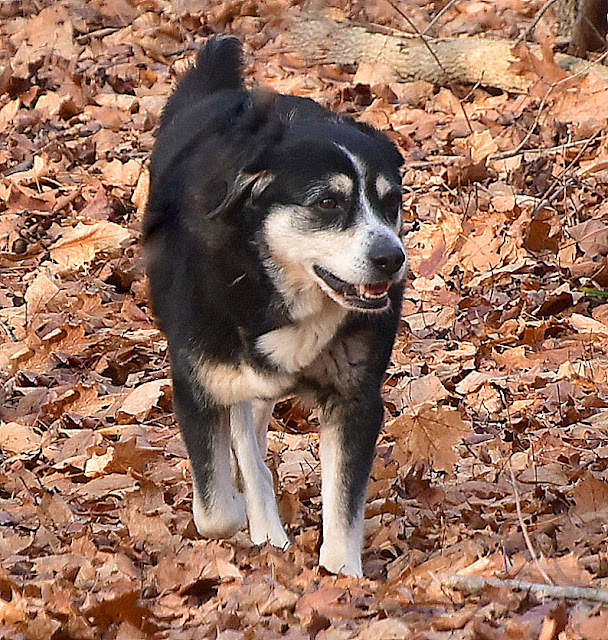 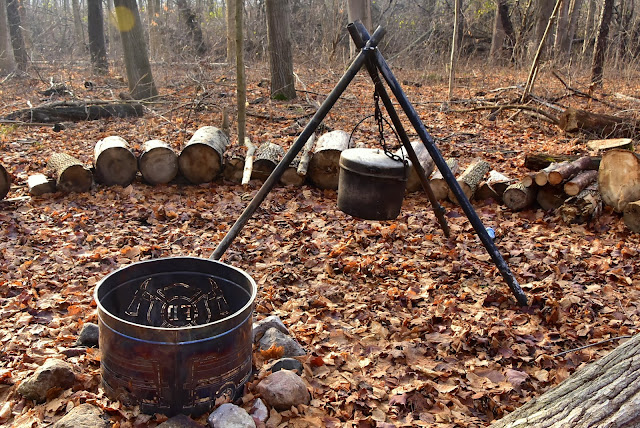 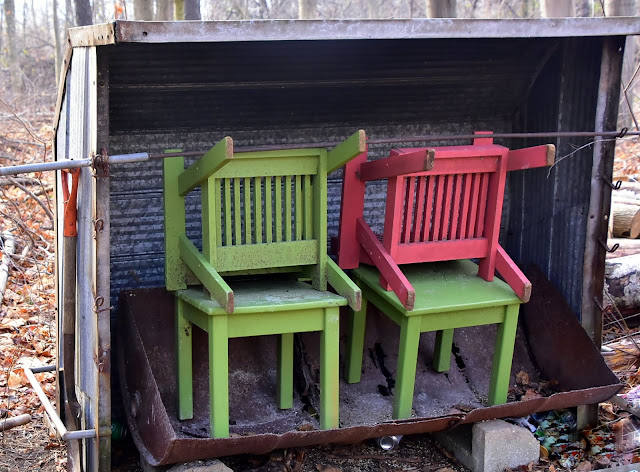 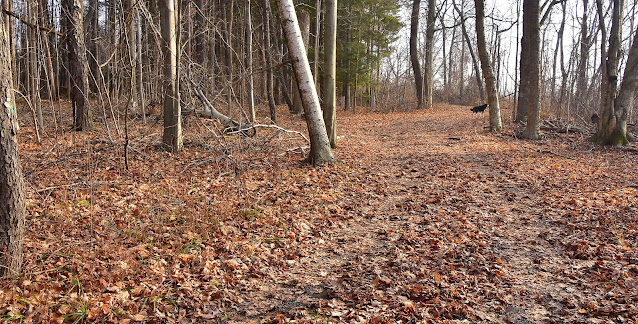 TIME TO HEAD BACK TO THE JEEP 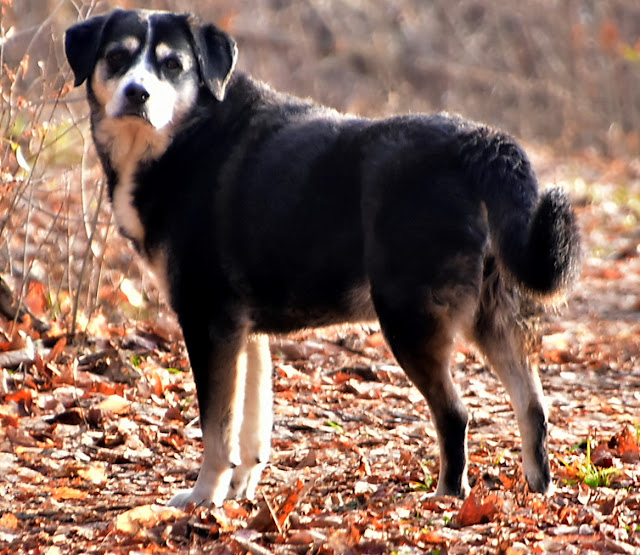 We were home somewhere around 10:30 and taking advantage of the exceptional weather I hauled out both the leaf rake and blower and proceeded to move a bunch of leaves around.  Refilled the birdfeeder, cleaned the rear deck eavestrough, and scuttled about doing a few other things I have already forgotten about. 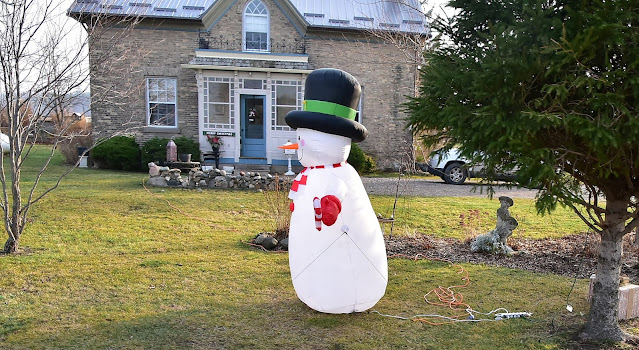 FROSTY IS NEEDING SOME SNOW

I've been doing really well at staying away from sweets for the most part but Kelly had bought a Pecan pie and I decided to have just a sliver of a piece this morning.  I wasn't even half-way through that smattering of pie when the phone rang.  Kelly took the call and it was my diabetic nurse person calling from the Maitland Health Center in Goderich wanting to make an appointment to see me.  Now here's the question....how in the hell did she know I was trying to sneak a sliver of pecan pie!!!!!!!  Geeeezzzz eh!!  The appointment is for January 11th and I'm hoping my pecan pie slip will have worn off by then.  My weight is holding at 191 pounds. 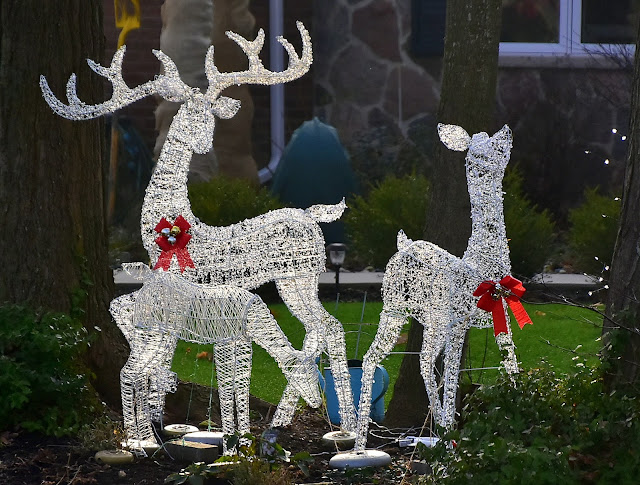 SEEN IN BAYFIELD THIS MORNING

And 10 years ago today we were in Bisbee Arizona:)) 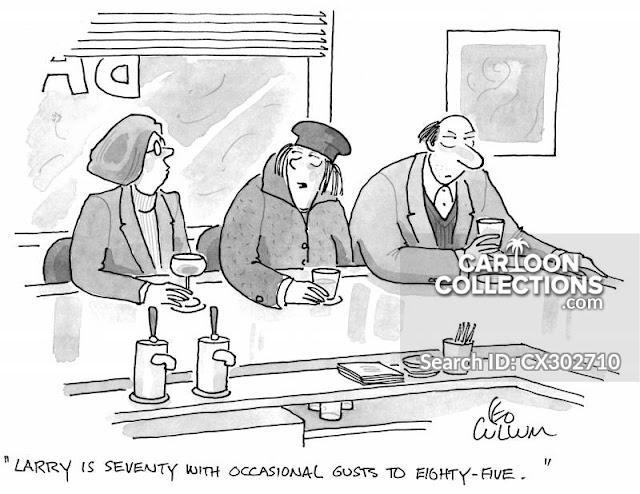