I HAD BETTER PUT A LID ON MY HOPES OF IT OPENING FOR CHRISTMAS....NO, NOT THE BORDER 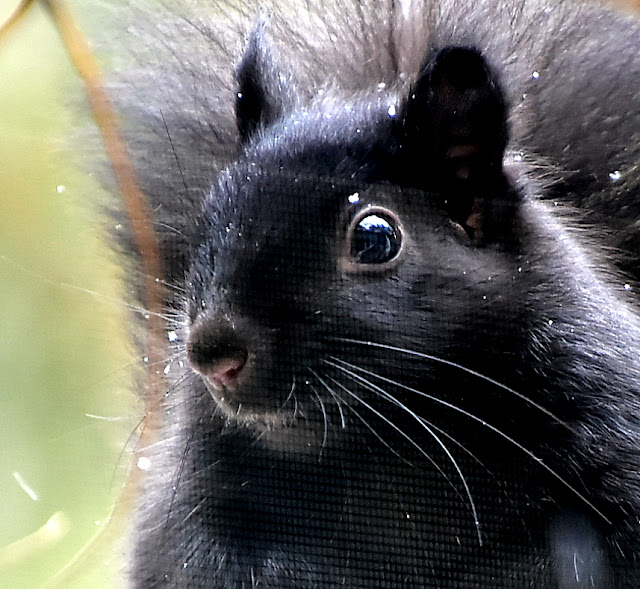 A cold and bleak 27F start to our day so there was nothing to rush outside about this morning.  But out we did go anyway with a short drive through Bayfield and out the other side.  There just wasn't anything out there in that gray dull landscape to get too excited about so I didn't take many photos.  We were back home before 10 o'clock. 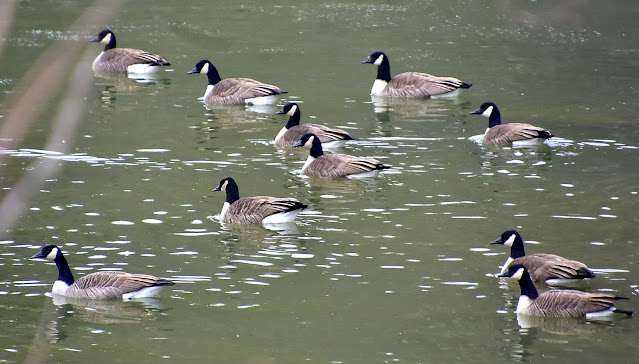 Nothing much going on at home either so needing a few more photos for today's post I kept my eye on our front yard again.  Of course there usually are a few birds here and there twitting about to challenge my photo patience and today was no exception.  At our house in Congress Arizona years ago I enjoyed catching birds in flight with my camera on sunny days as they came to the feeders but here I'm always shooting in shade without the Sun behind me so it is much more difficult.  To catch birds in flight requires an optimum light source and a fast shutter speed.  Poor lighting conditions like our shaded front yard do not work well with fast shutter speeds needed for flying bird photos. 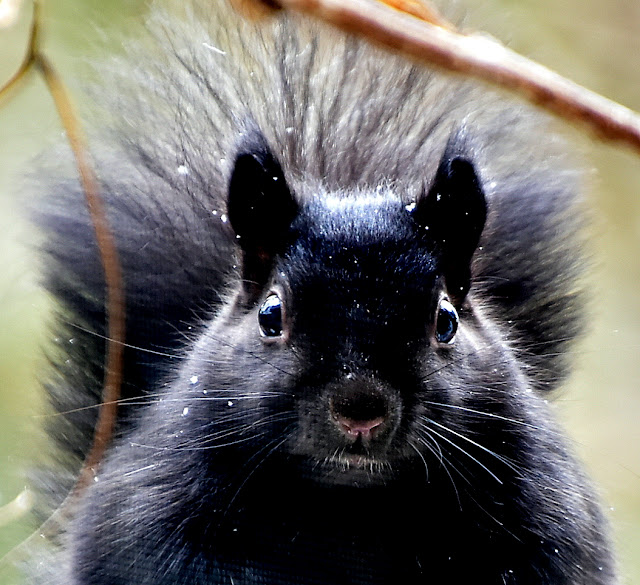 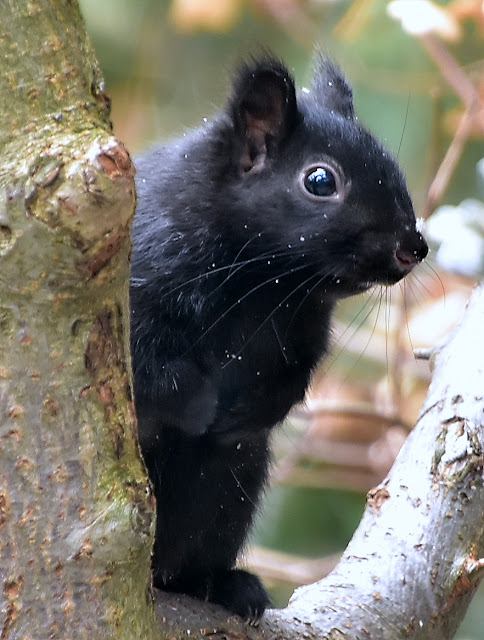 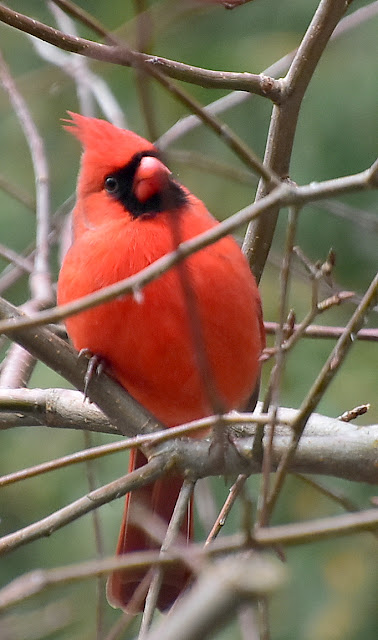 No big plans for Christmas here at our house and that's okay with us.  Christmas was fun as a kid and I was fortunate enough to spend a few Christmas's in the late 70's up into the mid 80's where kids were a part of Christmas day and I enjoyed being a part of that and am glad I had that experience.  I learned you need kids around to make yourself feel like a kid again. 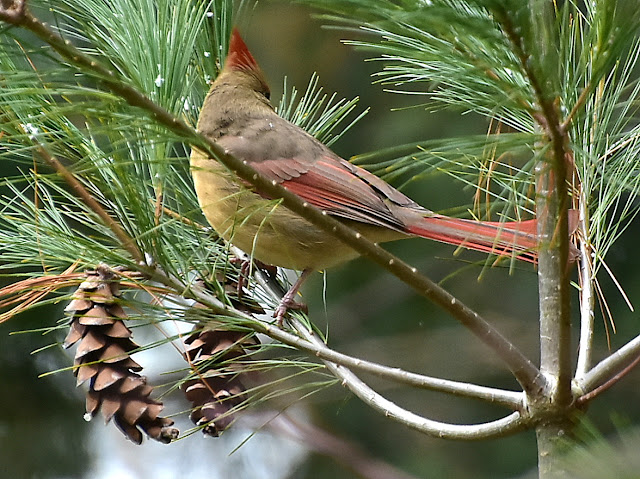 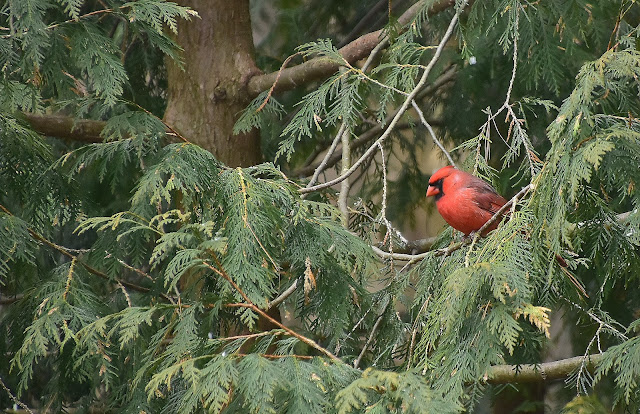 With our ground frozen now the hard surface makes for easier walking so instead of slogging through mud like the last few days Pheebs and I were able to walk farther this afternoon.  It wasn't quite as cold as I thought it was and I soon found myself way overdressed and had to remove my ski mask and stick it in my pocket.  No activity at the Tim Horton coffee shop site last two times I checked so guess I had better put a lid on my hopes of it opening for Christmas. 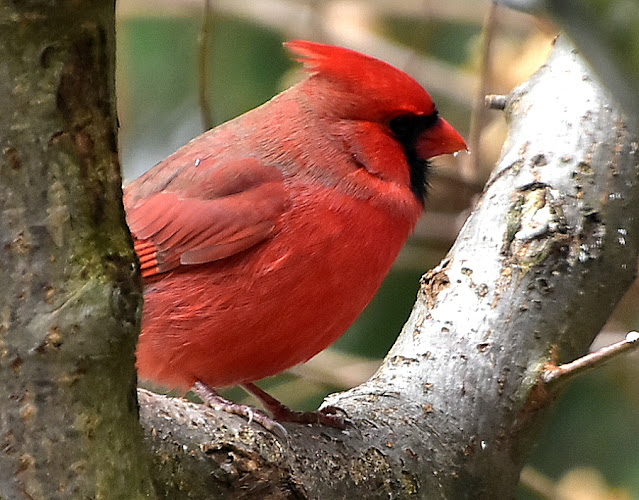 GROANER'S CORNER:(( If you are on Facebook, I am sure you will find this hilarious.  The 76-year-old woman walked down the hallway of Clearview Addictions Clinic, searching for the right department. She passed signs for the "Heroin Addiction Department (HAD)," the "Smoking Addiction Department (SAD)" and the "Bingo Addiction Department (BAD)." Then she spotted the department she was looking for: "Facebook Addiction Department (FAD)."  It was the busiest department in the clinic, with about three dozen people filling the waiting room, most of them staring blankly into their Blackberries and iPhones. A middle-aged man with unkempt hair was pacing the room, muttering,"I need to milk my cows. I need to milk my cows."  A twenty-something man was prone on the floor, his face buried in his hands, while a curly-haired woman comforted him.  "Don't worry. It'll be all right."  "I just don't understand it. I thought my update was LOL-worthy, but none of my friends even clicked the 'like' button."  "How long has it been?"  "Almost five minutes. That's like five months in the real world."  The 76-year-old woman waited until her name was called, then followed the receptionist into the office of Alfred Zulu, Facebook Addiction Counselor.  "Please have a seat, Edna," he said with a warm smile. "And tell me how it all started."  "Well, it's all my grandson's fault. He sent me an invitation to join Facebook. I had never heard of Facebook before, but I thought it was something for me, because I usually have my face in a book."  "How soon were you hooked?"  "Faster than you can say 'create a profile.' I found myself on Facebook at least eight times each day -- and more times at night. Sometimes I'd wake up in the middle of the night to check it, just in case there was an update from one of my new friends in India . My husband didn't like that. He said that friendship is a precious thing and should never be outsourced."  "What do you like most about Facebook?"  "It makes me feel like I have a life. In the real world, I have only five or six friends, but on Facebook, I have 674. I'm even friends with Juan Carlos Montoya."  "Who's he?"  "I don't know, but he's got 4,000 friends, so he must be famous."  "Facebook has helped you make some connections, I see."  "Oh yes. I've even connected with some of the gals from high school -- I still call them 'gals.' I hadn't heard from some of them in ages, so it was exciting to look at their profiles and figure out who's retired, who's still working, and who's had some work done. I love browsing their photos and reading their updates. I know where they've been on vacation, which movies they've watched, and whether they hang their toilet paper over or under. I've also been playing a game with some of them."  "Let me guess. Farmville?"  "No, Mafia Wars. I'm a Hitman. No one messes with Edna."  "Wouldn't you rather meet some of your friends in person?"  "No, not really. It's so much easier on Facebook. We don't need to gussy ourselves up. We don't need to take baths or wear perfume or use mouthwash. That's the best thing about Facebook -- you can't smell anyone. Everyone is attractive, because everyone has picked a good profile pic. One of the gals is using a profile pic that was taken, I'm pretty certain, during the Eisenhower Administration. "  "What pic are you using?"  "Well, I spent five hours searching for a profile pic, but couldn't find one I really liked. So I decided to visit the local beauty salon."  "To make yourself look prettier?"  "No, to take a pic of one of the young ladies there. That's what I'm using."  "Didn't your friends notice that you look different?"  "Some of them did, but I just told them I've been doing lots of yoga."  "When did you realize that your Facebooking might be a problem?"  "I realized it last Sunday night, when I was on Facebook and saw a message on my wall from my husband: 'I moved out of the house five days ago. Just thought you should know.'"  "What did you do?"  "What else? I unfriended him of course!" 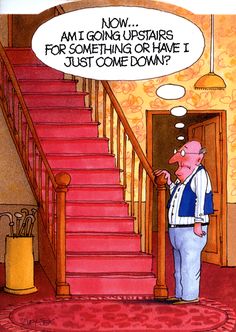 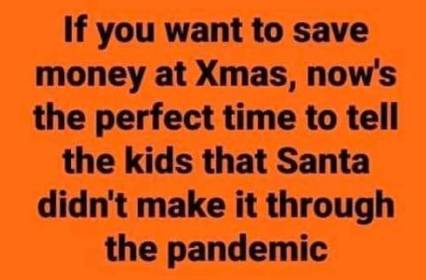