HAS OUR FIVE SEASONS PARK BEEN SOLD.....AGAIN?? 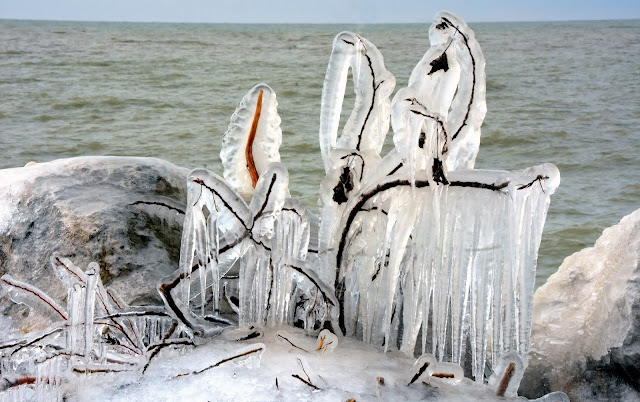 Checking our Park's real-estate site this morning we found out our Five Seasons Park has been 'conditionally' sold (again??) for $3,900.000.  Five Seasons Estates 'Conditionally Sold'.  No point in jumping to any conclusions yet because our Park has been down this road before so we'll wait to see what, if anything different happens this time. 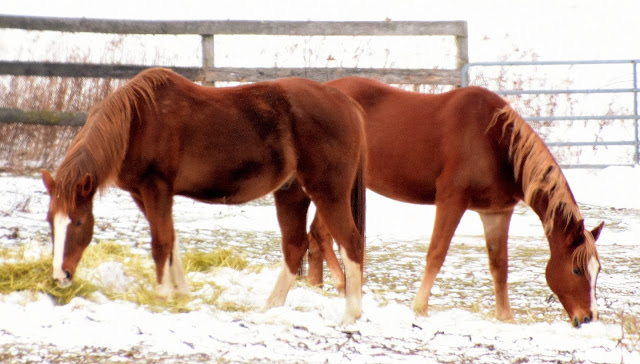 Our snowfall ended Saturday evening and with our temps up a few degrees to around the freezing mark and with diminished winds, we had a clear air day with a few Sun splashes making their way through the cloud cover.  Not too bad a day at all.  How nice to see a little bit of sunshine again:))Food Basics in Goderich is the only supermarket carrying 'diabetic' Boost so that was a destination for Pheebs and I this morning.  Roads were in good condition so for the first time in two days I took the Jeep out of 4-wheel drive.  A swing through McDonalds for coffee and it was down to the harbor we went.  I knew Lake Huron would have been busy building ice sculptures along the shoreline so it was those ice works I was looking for. 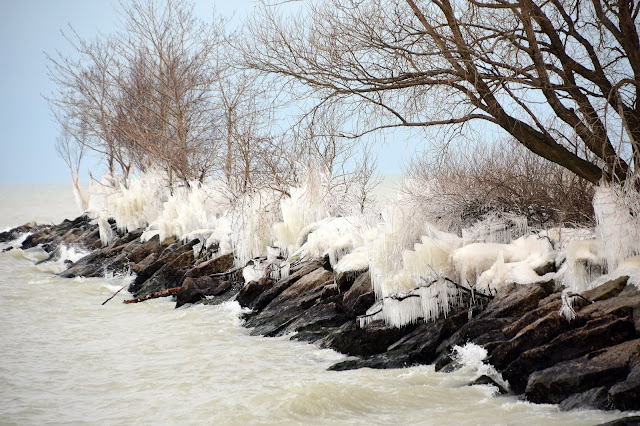 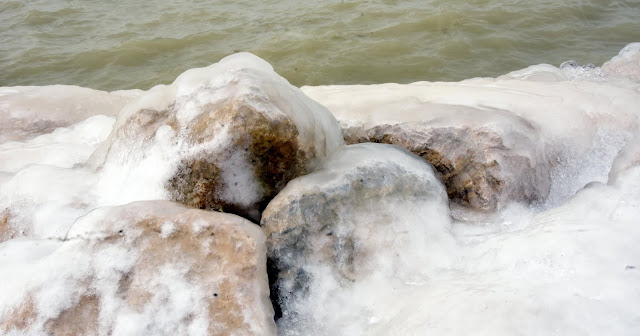 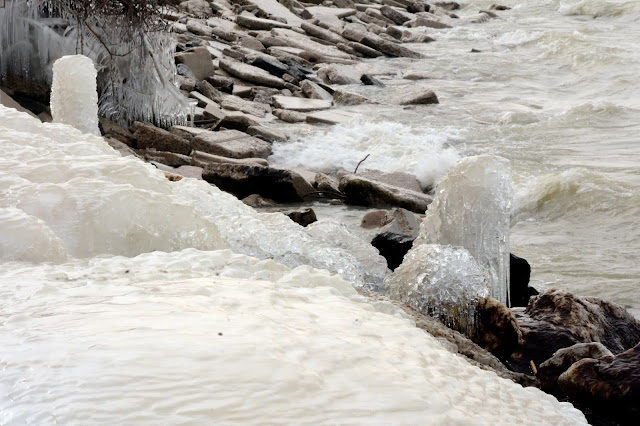 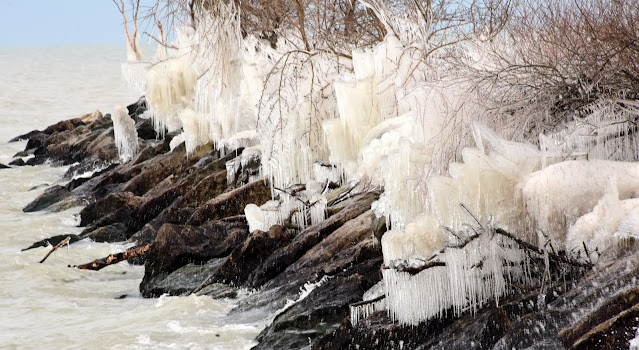 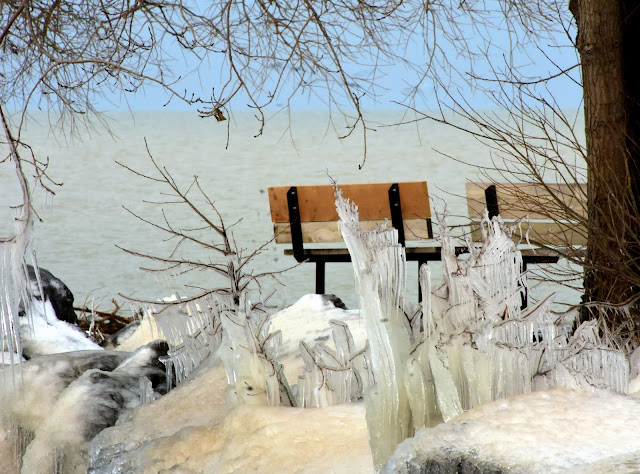 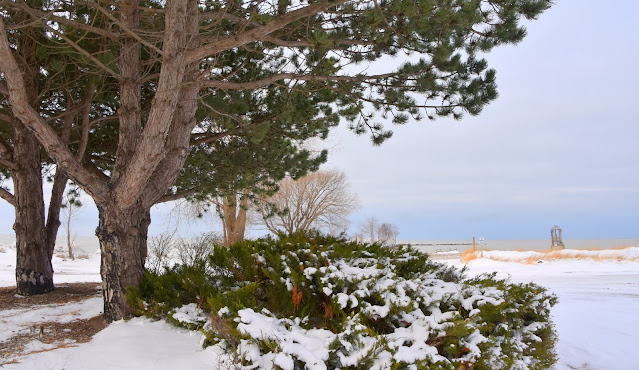 We were back home just short of 11 a.m.  I didn't need to do any snow shoveling but I did have some Christmas lights to dig out of the snow so I busied myself uncovering them.  While doing that a few rays of sunlight broke through the clouds, landing on me, and sparking an energy surge.  I quickly shoveled out two-thirds of our driveway and also started up our little Class C to let it warm up and run for a while.  In short, it was a reasonably good day because I finally got a few things done for a change.  Thanks for your help Mr. Sun:)))))) 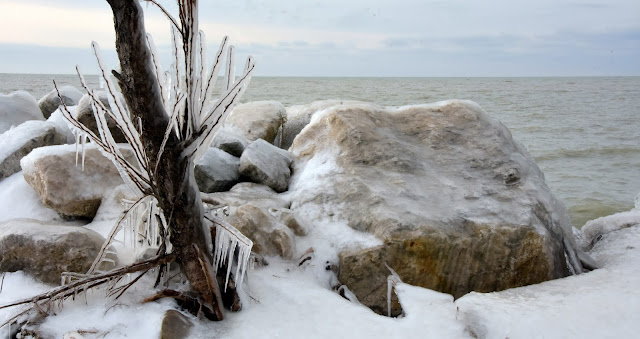 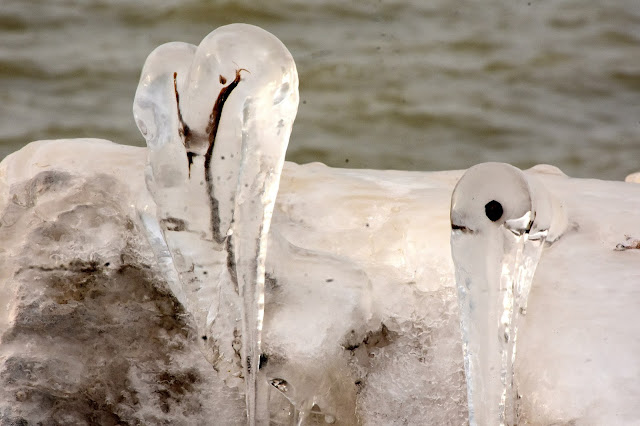 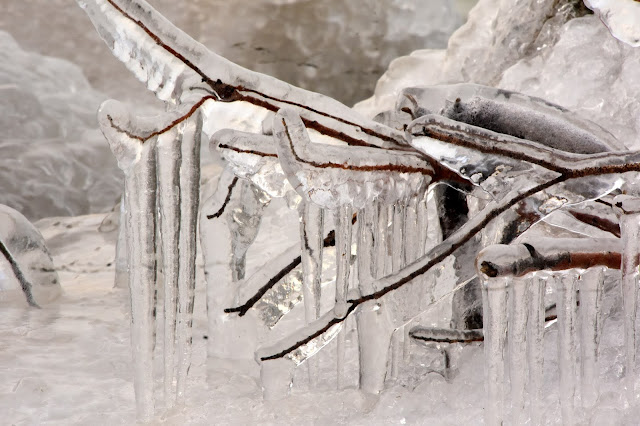 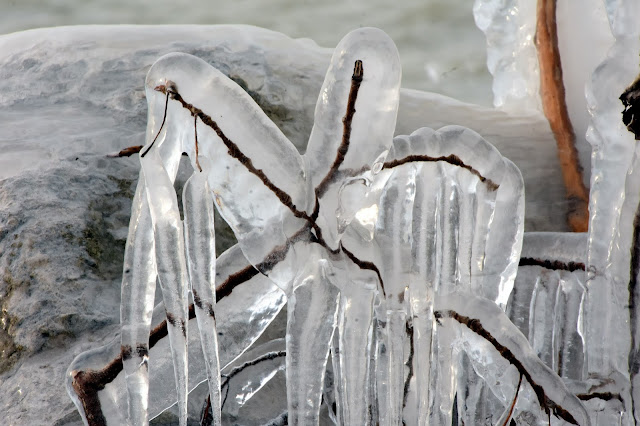 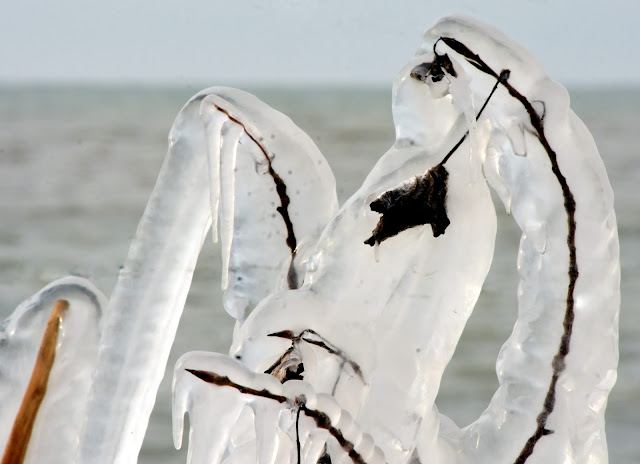 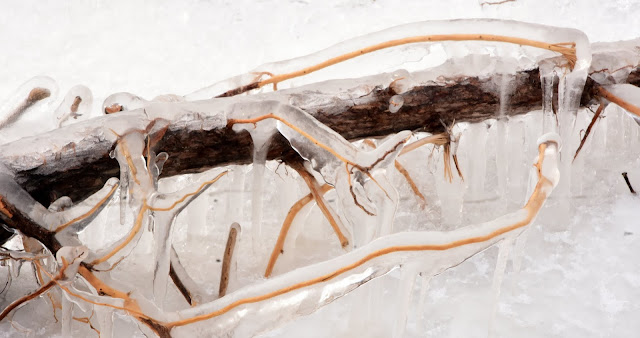 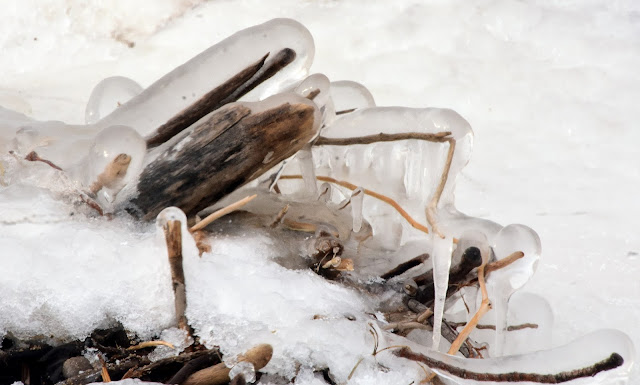 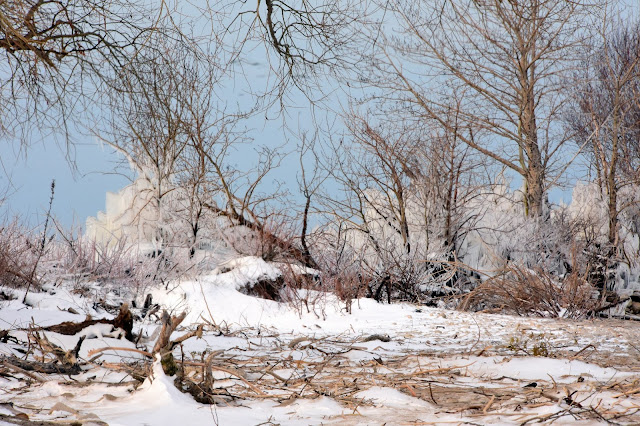 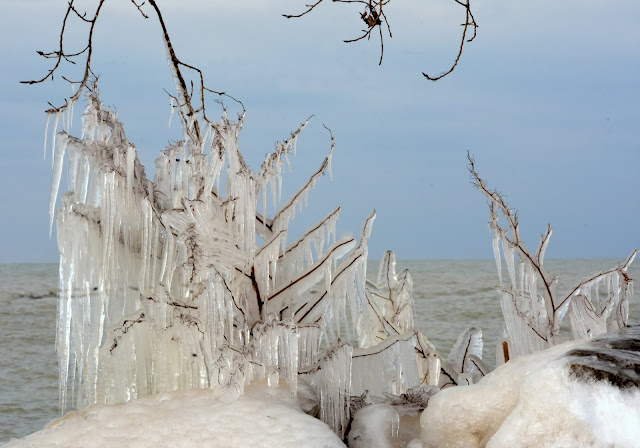 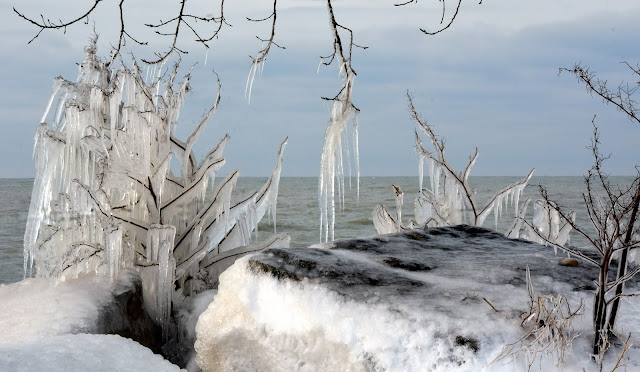 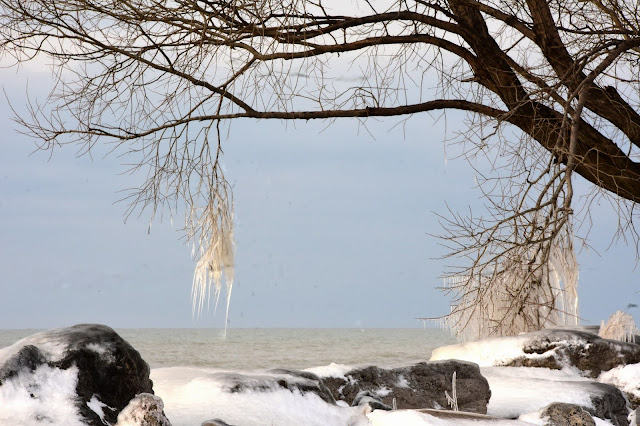 Want to thank everyone for all the 'Merry Christmas' wishes we received.  It is always encouraging to know we have so many caring friends out here. 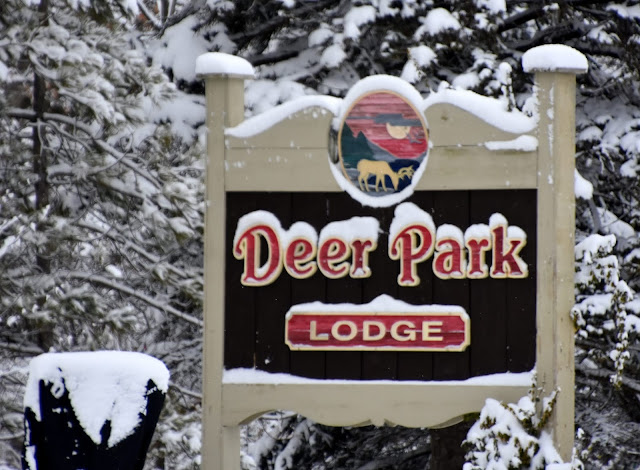 Took a picture of the Deer Park Lodge sign Saturday and of course that brought back a few memories.  Shortly after moving here in late 2002 Kelly landed herself a job there that lasted for the next 10 years.  By 2005 she was very instrumental in running the lodge.  Deer Park Lodge is a Seasonal place and closes up for the winter but Kelly most always did the bookings for the following summer.  A lot of those reservations were made by phone during the winter months and that posed a problem.  It was in the Fall of 2006 we bought ourselves an RV and so began our Snow Birding years to the Southwest.  But what about the Deer Park reservations??  Well, no problem, Kelly took the reservation book and Deer Park cell phone south with us.  We could be in New Mexico, Arizona, or California when her cell phone would ring and she would have to stop what she was doing and write down all the info for the reservation.  And this could happen at any time anywhere.  I remember one call coming in while at a Walmart store in Douglas Arizona. Kelly was in front of the milk cooler and had to fumble some groceries to get the phone out of her purse.  Often times we would be whooshing along one of the Interstates or crawling along a rough and tumble desert road somewhere when her Deer Park phone would ring.  It was March 12th, 2012 when we were precariously making our way up the narrow and steep drop-off roads of Harquhaula Mountain west of Wickenburg Arizona.  We were on a narrow shaky bend in the uneven rock-strewn road when.....her phone rang.  I had to stop right where we were and not let the Jeep move because a foot or two either way and we could easily lose the sketchy cell tower signal on those rocky slopes.  If you click on this Harquahala Link you can ride along with us and you can see a photo of Kelly on the Deer Park cell phone taking a reservation from someone. (remember to click on the pictures to enlarge them when you get there) Quite often the person on the other end of the line would ask Kelly how the weather was, thinking they were talking to her in snowy Bayfield.  Imagine the confusion for that person when Kelly would respond with, its sunny and seventy degrees:))  It was March 12th 2012 when we did that drive.

GROANER'S CORNER:(( You Might Be A Redneck if you've ever given a set of Tupperware ice tea glasses as a wedding present.- Your idea of heaven involves two shotguns and a keg of beer.
- You picket your horses on your lawn so you won't have to mow it.
- You're wearing a camouflage jacket and orange hunting vest in your driver's license pic.
- You stop to flirt with the person running the drive-through at McDonalds.
- You save old kitchen appliances for target practice.- You save old kitchen appliances for children's Christmas presents.
- You get up early on Saturday to go yard sale shopping for entertainment.
- Your gun cabinet takes up half your living room.
==================== 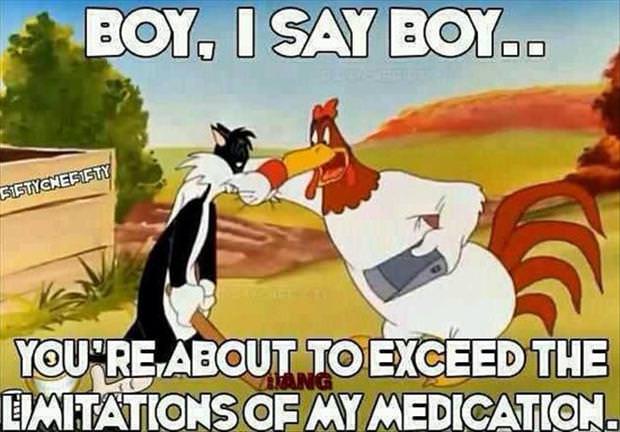