THE DAY JUST KIND OF DRIED UP AND FLATTENED OUT 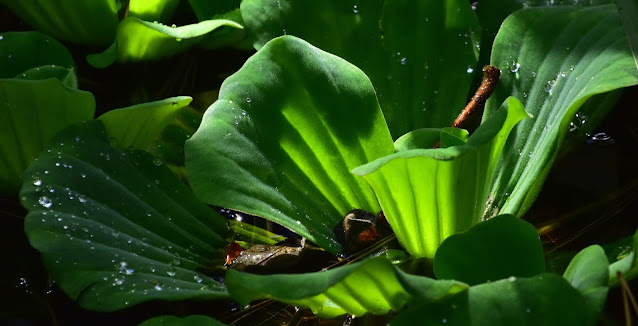 It was back to Goderich first thing this morning to pick up those few grocery items I walked out on last Sunday morning.  Only this time I went to Food Basics.  Much better.  Picked up some gas, a McDonald's coffee, and took a drive down around the harbor forgetting to remember the Rotary Cove road out to the dog walking area is closed until October 16th.  Still more work going on building up the shoreline against the coming late October and November storms. 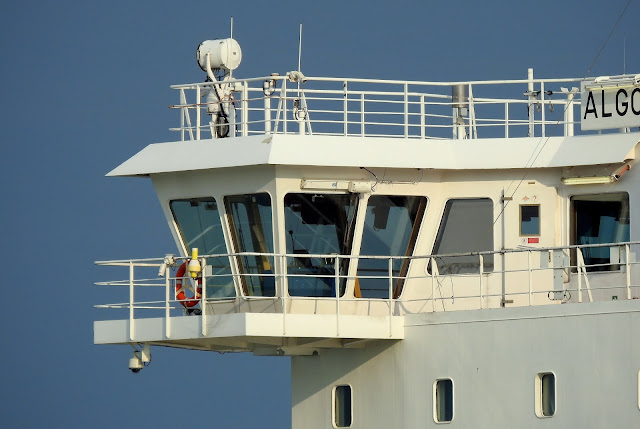 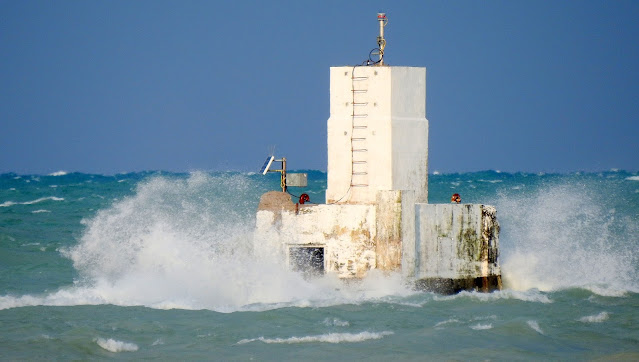 We took the scenic route back to Bayfield through Ben Miller and picked up a few seasonal photos along the way.  It's starting to look and feel a little Thanksgivenish and Halloweeny out there in the countryside. 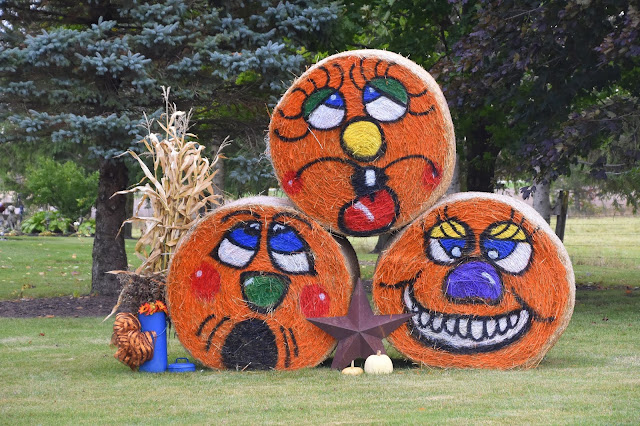 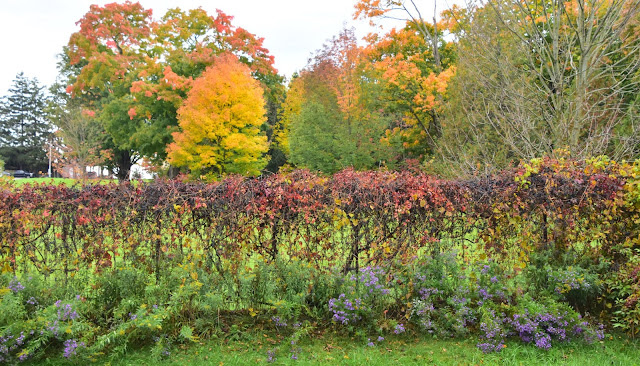 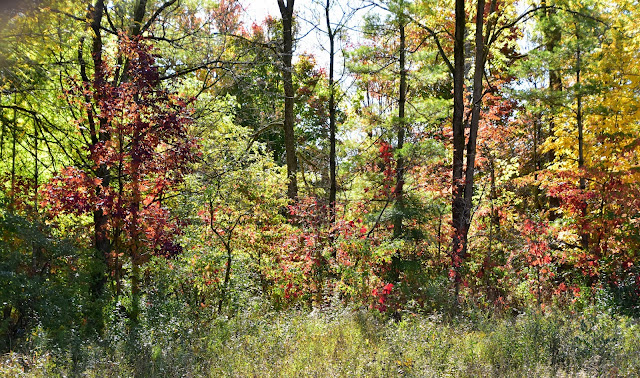 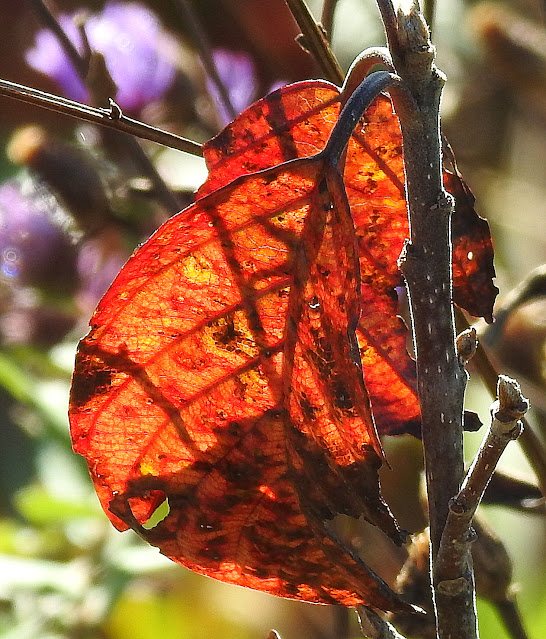 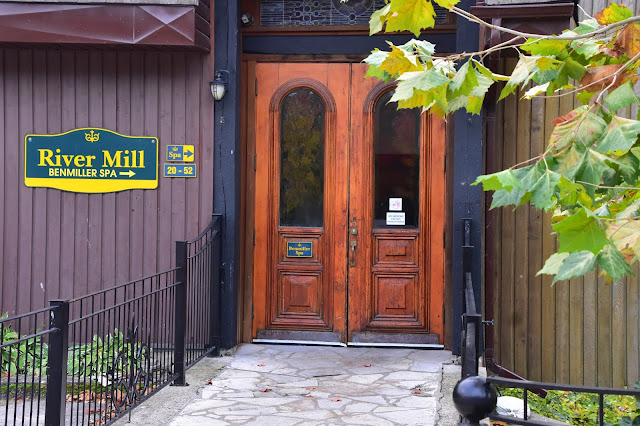 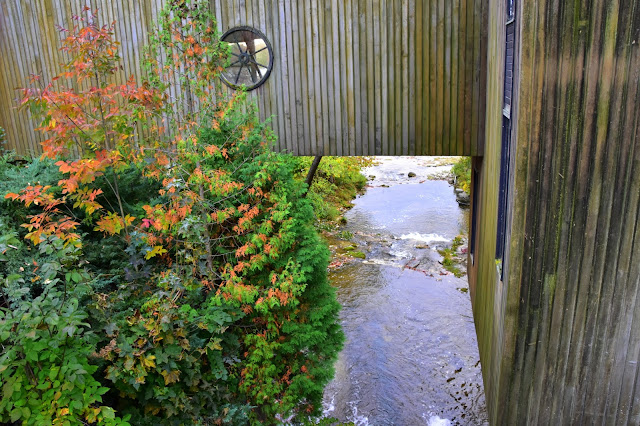 I had spotted a trail a few weeks ago at the northwest corner of the Colborne Cemetery northeast of Goderich so this morning Pheebs and I decided to drive to the back of the cemetery and see where that trail would lead us.  Well, it didn't go too far actually.  Maybe the short side of a quarter-mile with it ending at a farmer's field.  A second trail branching off on the right side led in a semi-circle back to the northeast corner of the cemetery.  Both semi-maintained trails could be walked in about 15 minutes or less. 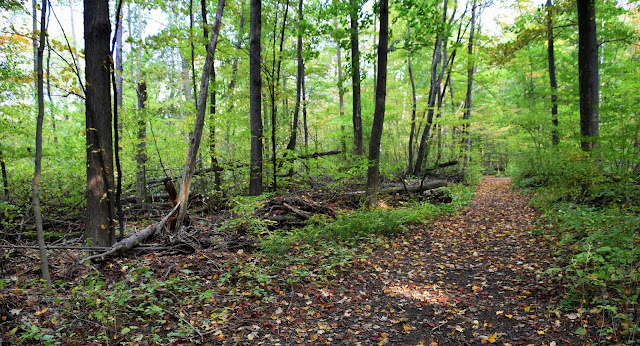 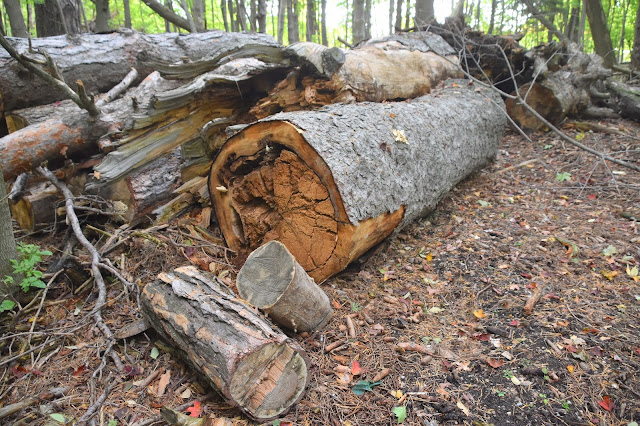 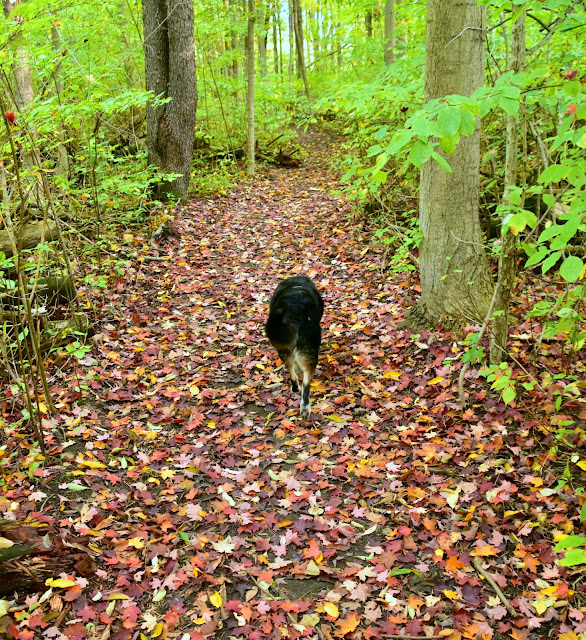 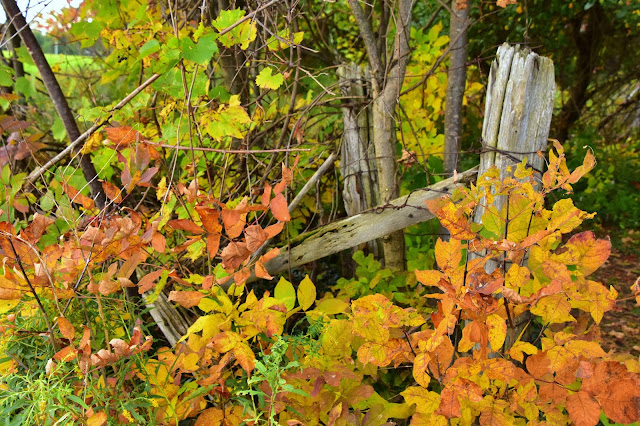 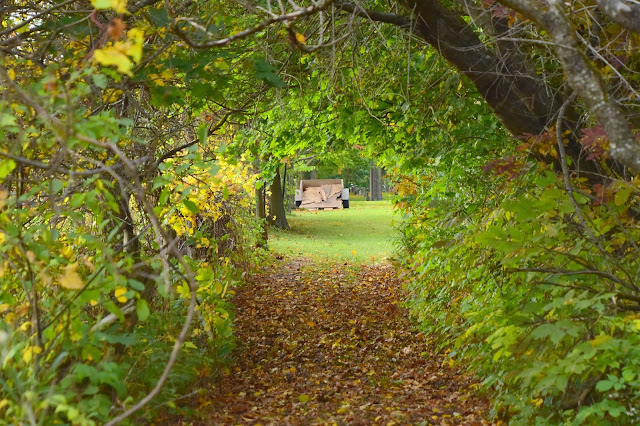 It was a sunny but windy day making it feel cooler than it actually was.  Nice day nonetheless and I put a few yard things away.  Didn't have quite as much energy stored up as I thought I did and was soon back in the sunroom watching our front yard birds coming and going from the comfort of my recliner. 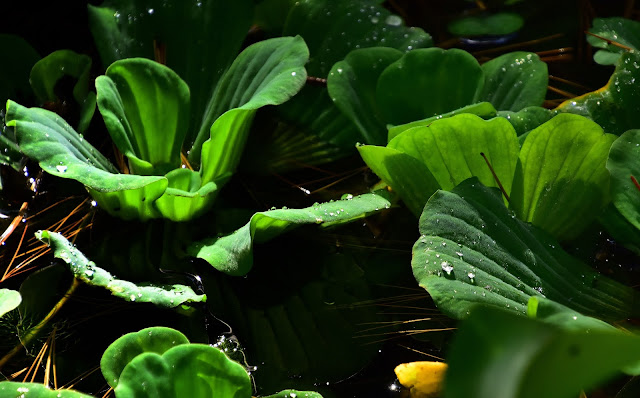 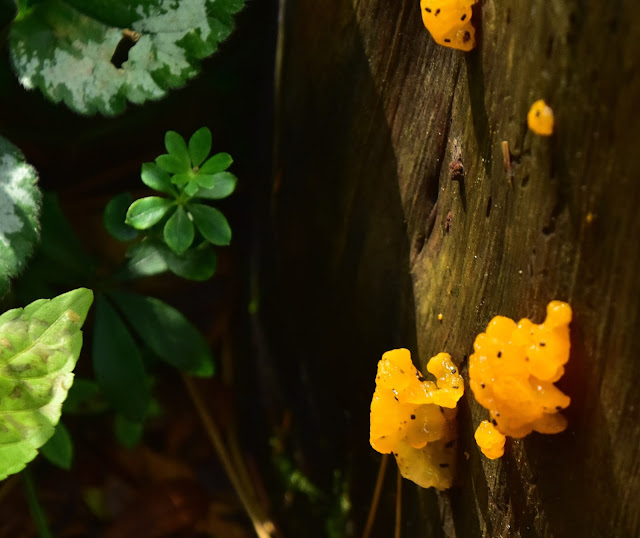 The Blue Jays have really taken over the new feeder which I am having trouble keeping filled up.  I guess that's okay for the Jays but not so good for my birdseed pocketbook.  Some of the bird photos below could have been better but I've included them anyway 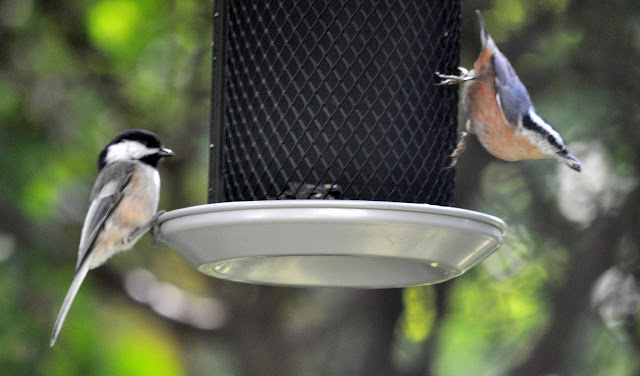 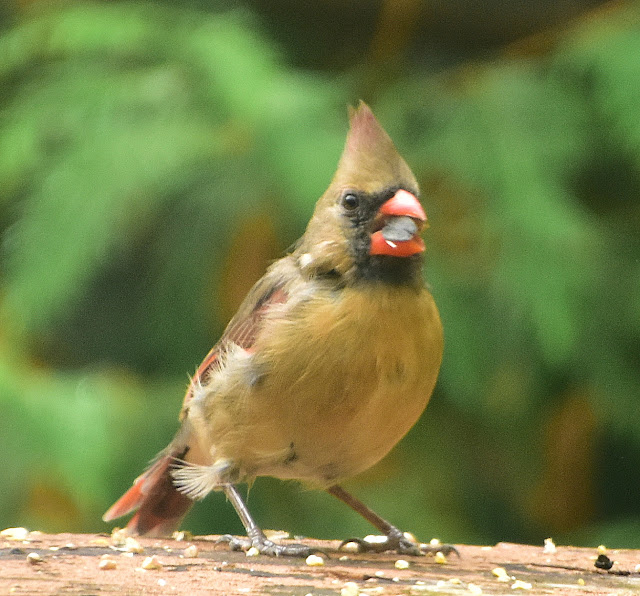 Our sunny morning gave way to an increasing cloud cover and other than an afternoon walk for Pheebs and I the day just kind of dried up and flattened out.  Sunshine returned late in the afternoon and everything was good again:)) 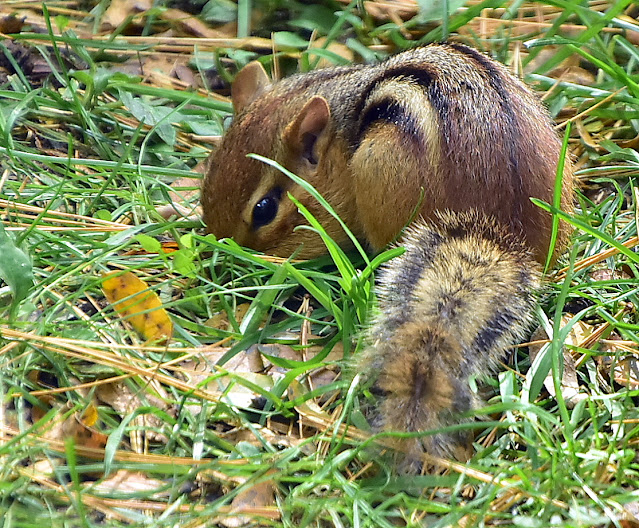 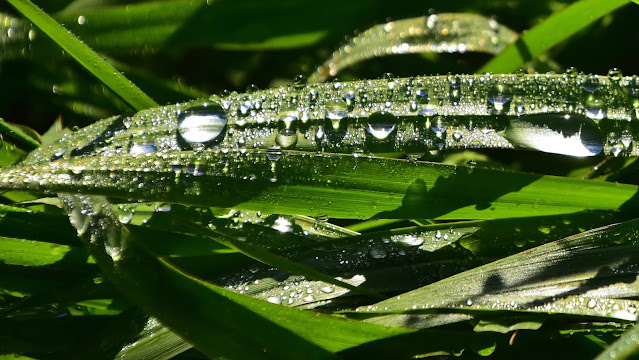 With colder mornings upon us now I crank up the Jeep's heater full blast for a short while.  I have a couple dash vents on either side of the steering wheel and have them strategically positioned to blow their soothing warm air at two points on the wheel.  One blows directly onto the 10 o'clock spot while the other one blows onto the 2 o'clock position.  Why those two places??  That's right where I have my hands placed and oh how I like to feel that warm air blowing directly on my hands.  If my hands are cold then I am cold so it's always important for me to get my hands warmed up first:)) 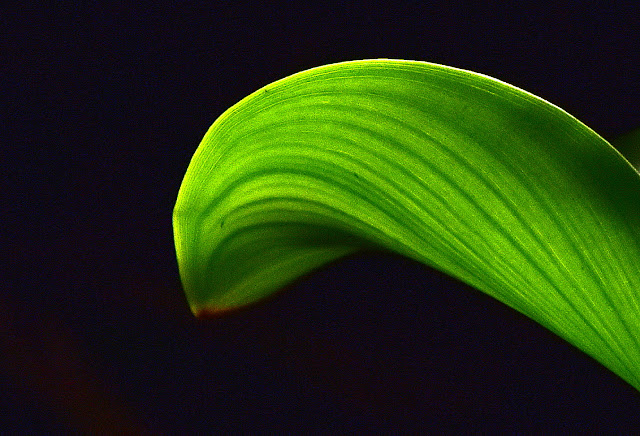 GROANER'S CORNER:((   Tim decided to tie the knot with his long time girlfriend. One evening, after the honeymoon, he was organizing his golfing equipment. His wife was standing nearby watching him.  After a long period of silence she finally speaks: "Tim, I've been thinking, now that we're married maybe it's time you quit golfing. You spend so much time on the course. You could probably get a good price for your clubs."  Tim gets this horrified look on his face.  She says, "Darling, what's wrong?"  "For a minute there you were beginning to sound like my ex-wife."  "Ex-wife!" she screams, "I didn't know you were married before!"  "I wasn't," he replied. 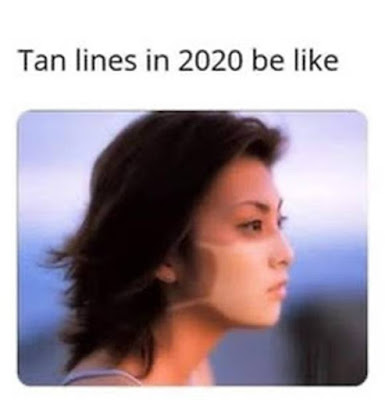 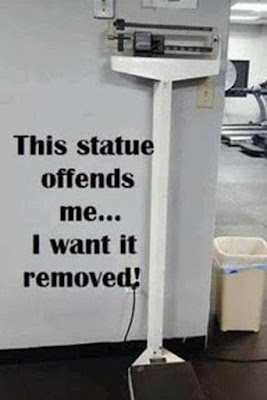