PHEEBS AND I HELPED 'GUNNAR' FIND HIS WAY HOME TODAY AND THE 'OFFICIAL' EXTENDED DATE RE: BORDER CLOSURE

Not a good night's sleep so I kinda hung around in a foggy state of grogginess today.  Hate when that happens.  Pheebs and I spent part of our time this morning driving in and out of farm lanes, tooting the Jeeps horn, and waiting for someone to come out.  Out of eight stops only two places had someone step outside.  Okay, let me explain.....Driving north on Porter's Hill lane shortly after 8 a.m. I saw something on the road ahead that looked like maybe it was a sheep.  Slowing down and drawing closer I saw it was a large dog that I guessed might be a Golden Retriever.  Worried about it being on the road I pulled over and stopped.  The dog, wagging its tail immediately came over to the window.  I knew right away it was friendly.  Now I had a dilemma, do I leave this dog on the road where it could be hit by a car or do I attempt to get it into the Jeep and then set off to find the owner.  I chose the latter.  Opened the back door and with Pheebs help and a little coaxing the big dog jumped up into the back seat.  I could see it was in good shape and had a collar on with a couple tags.  The dog and Pheebs were big Pals right off the bat, but now what to do.  There were farms along the road so I drove back down Porter's Hill Line for a couple miles pulling into each farm lane, driving up to the house with two quick toots of the horn.  The first 6 places I went either nobody was home or they wouldn't come out.  At the last two places I stopped I talked to two different farmers but it wasn't their dog and they didn't know who's dog it might be.  Thought of taking the dog, who's dog tag name was 'Gunnar,' to the Vet place in Clinton but stopped at Richard and Gayle's first.  With an ID number on the tag Richard suggested I take the dog home and make a few phone calls.  So that is what I did.  Kelly found a phone number on Gunner's tag and made the call.  Yep, it belonged to some folks further up Porter's Hill Line so, with directions in hand, Pheebs and I headed north back up Porter's Hill Line taking the wandering Gunnar home.  Wow, Gunnar sure lived at a nice place and I was glad to see he had a spacious country property complete with a big pond.  Pheebs and I were back home by noon with a good feeling about our morning's happy ending.  The rest of our nice sunny cool day for me was spent in various states of snooze. 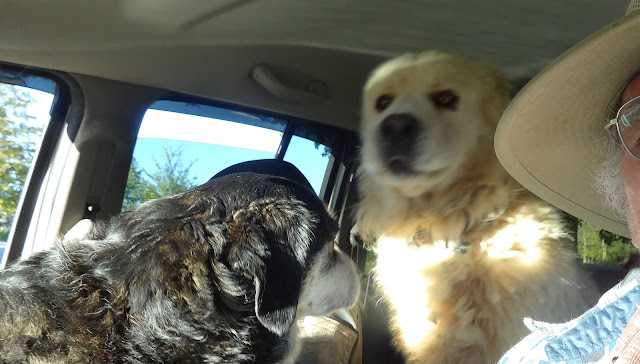 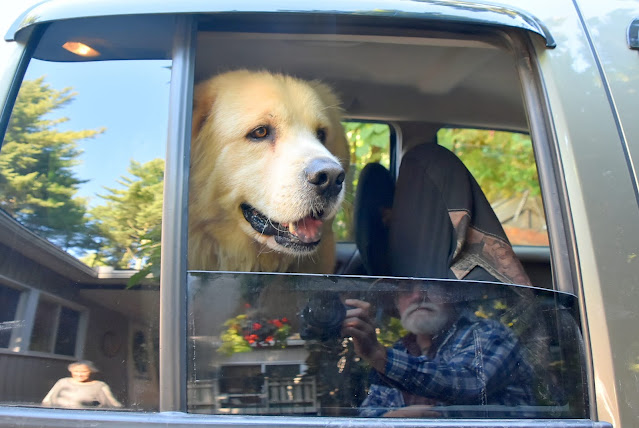 Okay, so here's the official Canada-USA border closure extension as of today.  The closure has been extended to October 21rst.  (not the end of November as previously stated) 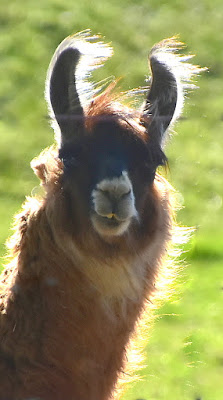 GROANER'S CORNER:(( A sweet grandmother telephoned St. Joseph 's Hospital. She timidly asked,  'Is it possible to speak to someone who can tell me how a patient is doing?'  The operator said, 'I'll be glad to help, dear. What's the name and room number?'  The grandmother, in her weak tremulous voice said, ''Norma Findlay, Room 302.'  The operator replied, 'Let me place you on hold while I check with her nurse.'  After a few minutes the operator returned to the phone and said, 'Oh, I have good news. Her nurse told me that Norma is doing very well.. Her blood pressure is fine; her blood work is normal and her physician, Dr. Cohen, has scheduled her to be discharged on Tuesday.'  The grandmother said, 'Thank you. That's wonderful! I was so worried! God bless you for the good news.'  The operator replied, 'You're more than welcome. Is Norma your daughter?'  The grandmother said, 'No, I'm Norma Findlay in 302. No one tells me a damn thing!!

Did you hear about the war between Newfoundland and Nova Scotia ?  The Newfies were lobbing hand grenades; the Nova Scotians were pulling the pins and throwing them back.

"I'm sorry," said the clerk in flower shop, "we don't have potted geraniums. Could you use African violets instead?"  Replied the customer sadly, "No, it was geraniums my wife told me to water while she was gone." 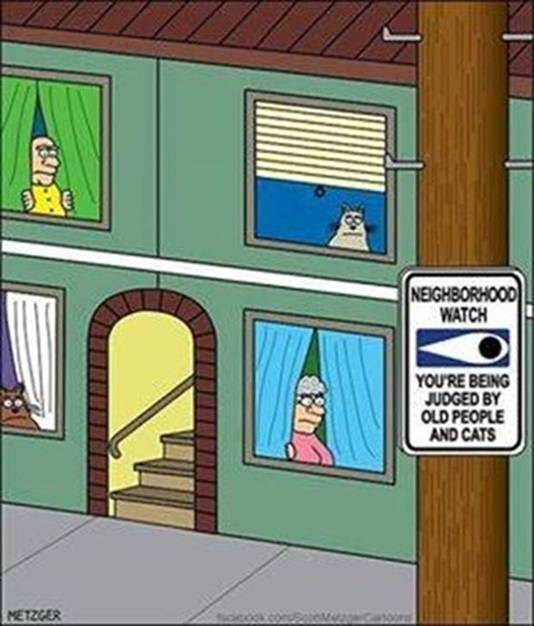