MY CATCH-UP POST FROM TUESDAY AND THE CANADA-U.S. BORDER CLOSURE HAS BEEN EXTENDED

Fortunately, with a good night's sleep, Kelly is looking and feeling better today.  Her bouts of itching are directly related to her failing liver condition and those bouts can strike at any time with no warning.  Unfortunately, they seem to happen more in the night and the attack she had Monday night was the worst so far.  It's generally in her arms.  She has been prescribed pills and creams but they are no longer giving the satisfactory relief they once did.  She slipped up to Goderich's Dynacare blood clinic this morning and plans to call her Doctor in a couple days.Nice sunny cool morning earlier today so Pheebs and I slipped out to enjoy a few hours of this gorgeous early Fall day.  Home again I had a few more things to unload from the rig and decided to clean up the Jeep's interior.  No small feat with doggy fur everywhere.  In fact, I sucked up so much doggy fur the vacuum cleaner started wagging its cord and barked at me.

After rolling south out of Sarnia Tuesday morning we had us a leisurely drive along the St. Clair River.  So refreshing to see new scenery and travel roads we had never traveled before.  Kelly wanted to stop into a Blueberry Farm over near Bothwell Ontario so after awhile we headed east in that direction.  Feeling the need for a traveling breakfast we stopped in Wallaceburg along the way at a McDonalds and it was here I noticed we had a flat tire on the rig.

Checking tire pressures Sunday afternoon I had noticed the rear outside dually on the passenger's side was down about 10 pounds.  With difficulty, I added air.  Whoever put that tire on last did not do it properly and it was hard to get at the valve stem.  Monday morning the tire was visibly flat.  Fortunately, we were only a couple parking lots away from a Canadian Tire Store so after our eats we headed on over there.  A guy came out, looked at the rig, and said they didn't have a jack to lift that much weight.  What a pile of crap that was!!  Even I knew better than that.  Two thumbs down for Wallacburg's Canadian Tire Store.  The mechanic did say there was a tire place across the street so off we went to O'Neill Tire And Battery  Well, a complete attitude difference over here with a personable fella to talk to.  Within minutes he had the rig backed into a bay and a tire jack underneath.  The tire itself was fine but once again it was a valve stem problem.  Because the tire had been installed improperly the ill-located valve stem had come loose.  He corrected that problem by tightening the curved valve stem and protruded it through the opening in the rim where it should have been in the first place.  Nice fella and he really liked our little Winnie.  Only charged us $27 and we were on our way.  Two thumbs up for O'Neill Tire and Battery in Wallaceburg, Ontario. 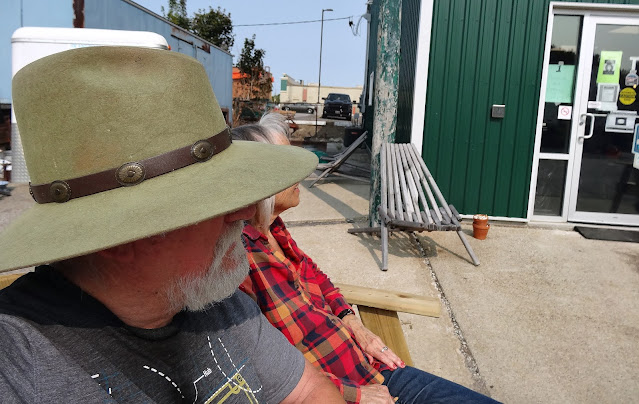 The Blueberry Farm wasn't up to snuff so Kelly didn't buy anything and I didn't even go in.  Took Pheebs for a walk around the grounds instead.  I could see Kelly was really tired by this point but she wanted to soldier on anyway.  We headed northwest for a little spit of a place called, Oil Springs.  Thinking the Oil Museum of Canada near there would be open, we found out it wasn't.  We had forgot about Covid.  This may be a little hard for a lot of hardened oil folks to believe but this is the site of the very first commercial oil well in 'all of North America'.  The well was dug by James Miller Williams in 1858.  Although unable to get onto the grounds we were able to drive slowly by on the gravel road and I snapped a few pictures. 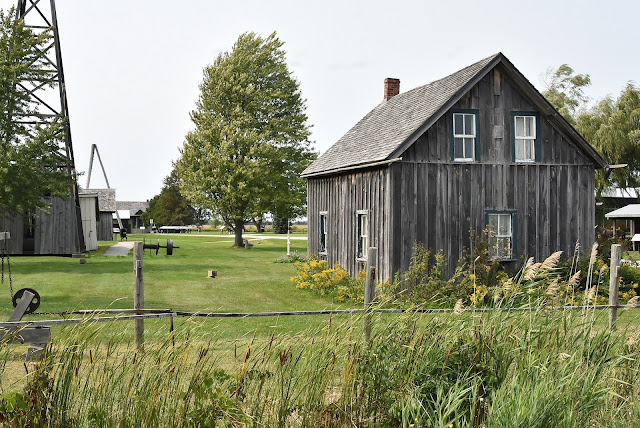 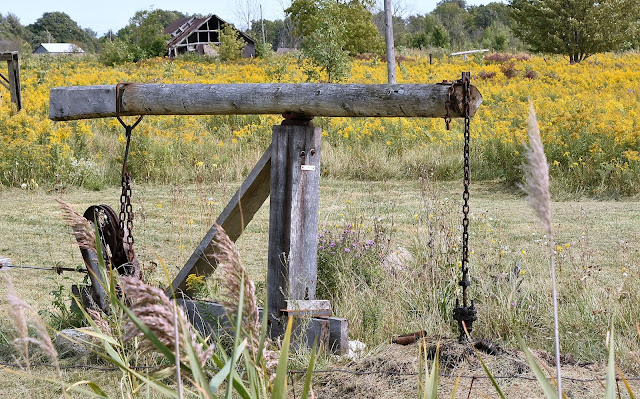 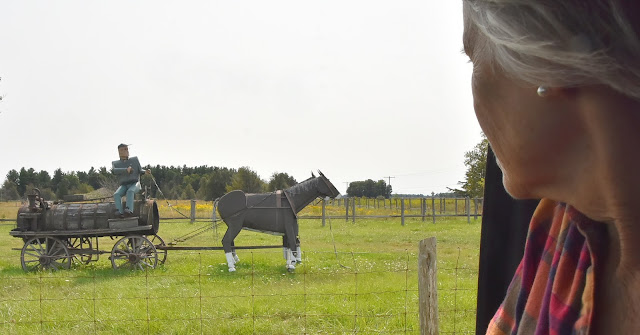 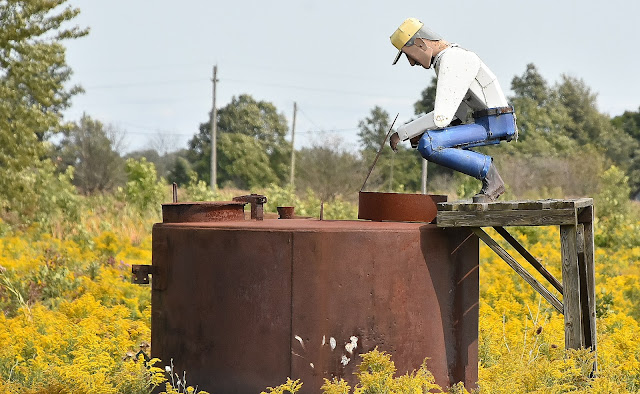 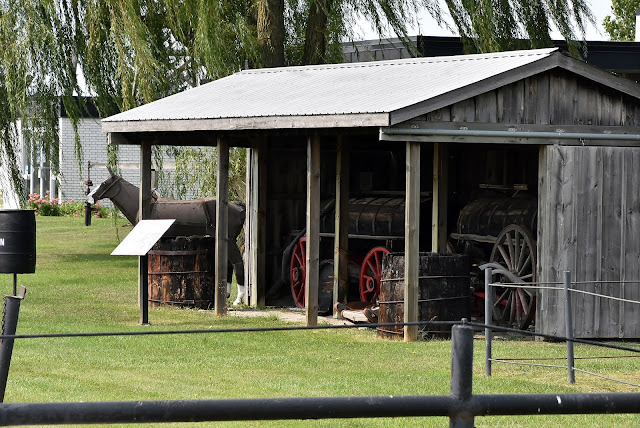 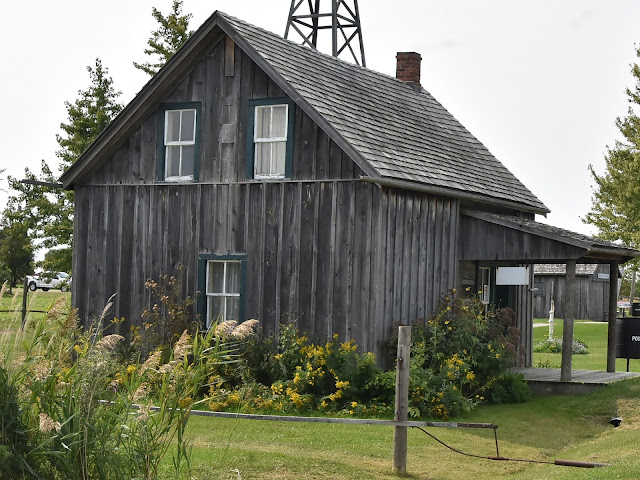 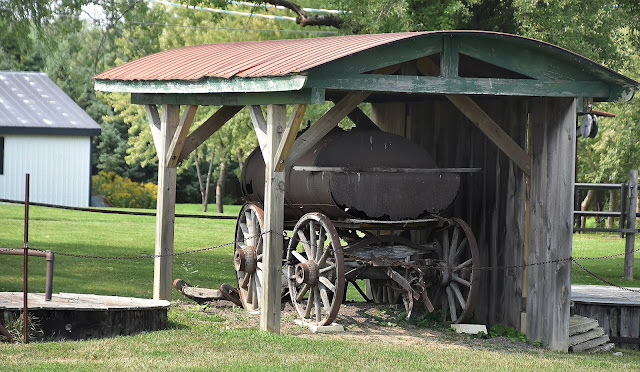 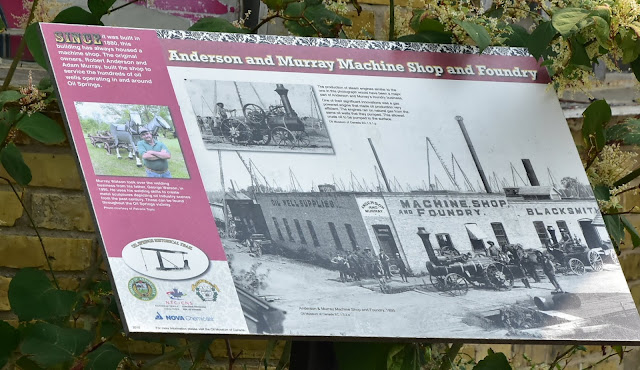 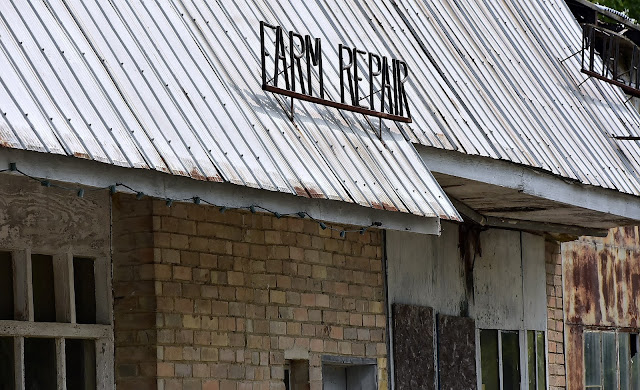 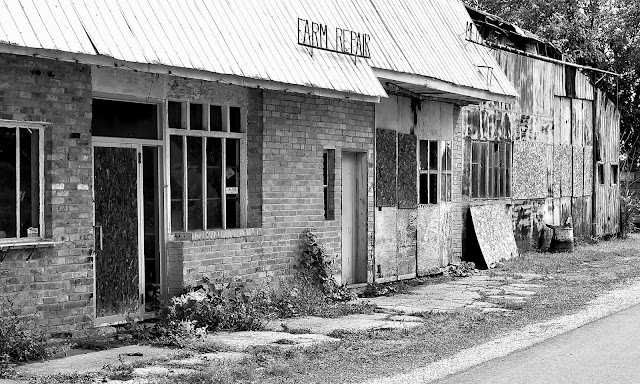 Continuing our slow trek north for a while we finally decided after a bit to simply continue on home.  The rig was running fine but we weren't.  More than anything, Kelly needed not only a rest but a good night's sleep.  I wasn't far behind her.   South of Forest Ontario we linked up with our old 'coming home' route from the American Southwest and that led right through the village of Forest.  Forest is where we always stopped for our customary first cup of Tim Horton's coffee once back in Canada.   It was always the best cup of coffee since leaving Canada months before in late October.   Today was no exception as we made our stop yet again.  No apple fritter donuts this time but we did split a Sub from Subway across the road.
We were home sometime around 4:30 p.m. and even though we hadn't been gone 5 months we were still glad to be home after only a couple days away.  But not to worry, we're already looking forward to our next little excursion which may very well take us in a northerly direction.  Weather and health permitting of course:))
Update:: Heard on the 6 o'clock news tonight the Canada-U.S. border closing has now been extended to the end of November.......:((
GROANER'S CORNER:((  A man was sitting in a bar and noticed a group of people using sign language. He also noticed that the bartender was using sign language to speak to them.  When the bartender returned to him, the man asked how he had learned to use sign language. The bartender explained that these were regular customers and had taught him to speak in sign. The man thought that was great.  A few minutes later the man noticed that the people in the group were waving their hands around very wildly. The bartender looked over and signed "Now cut that out! I warned you!" and threw the group out of the bar.  The man asked why he had done that and the bartender said, "If I told them once I told them 100 times - NO SINGING IN THE BAR!"

- Social climbers are always trying to reach higher into the statusphere.

- A lot of people think kids say the darnedest things, but so would you if you had no education yet. 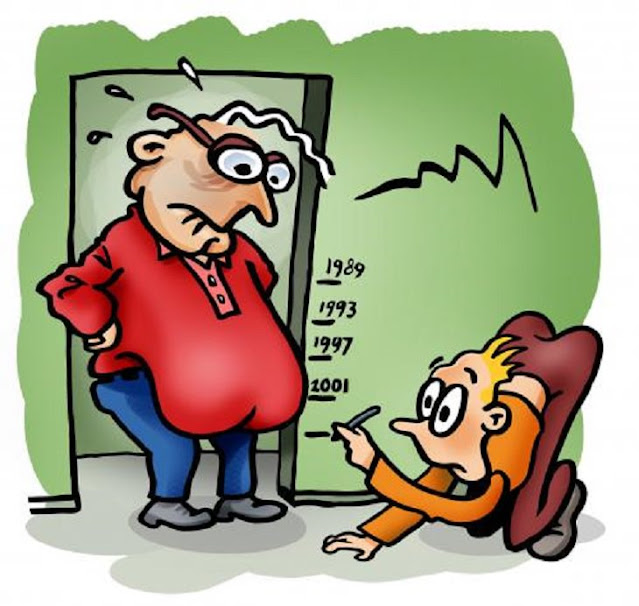 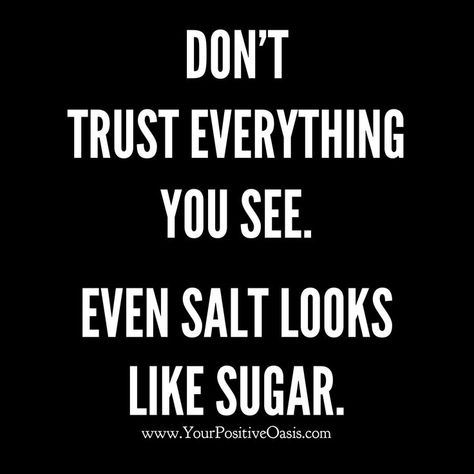