THAT CAN SOMETIMES BE A BIT OF TRICKY BUSINESS

Another really hot one but Pheebs and I rolled out early enough to take advantage of morning's slightly cooler temperature.  We headed straightaway north to Goderich's Rotary Cove beach where I knew there would be a nice cooling breeze coming in off the lake.  And there was.  Not many week-enders there yet so we were able to spend a little quiet time by the water before cars began rolling in. 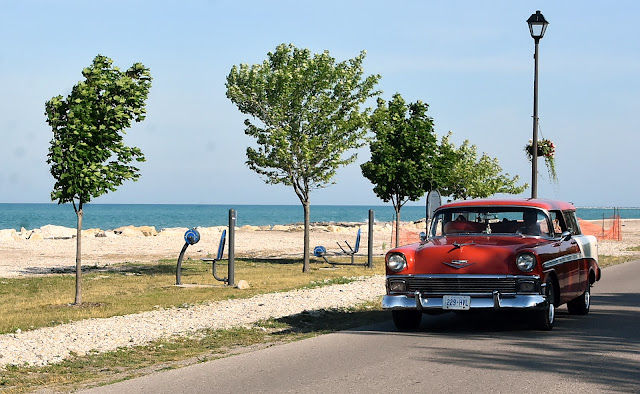 We took the scenic countryside route home snapping a few pics along the way.  A beautiful looking summer's morn with very little traffic anywhere.  A couple hay wagons and that was about it. 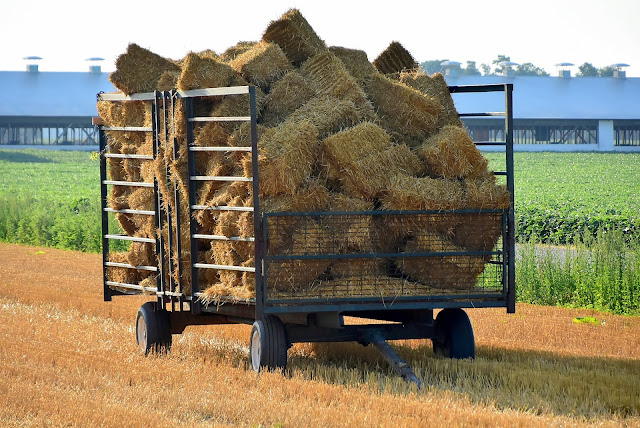 Home by 10 Kelly was busy inside the rig trying out different curtains and stuff.  The curtains you see in the pics below may not be the one's staying in the coach.  Despite the building heat I decided to check out a few system things on the rig.  Hooked up to shore power and that worked fine except for a few of the usual small ker-fuffles.  It's a manual water fill on this rig so I added some water to the fresh water tank.  The rig's water pump works perfectly.  Generator fires up with just a touch of the on-switch.  Tomorrow we'll check out the propane system and see how it goes.  That can sometimes be a tricky bit of business getting things to work if it hasn't been used for awhile.
I think Pheebs and I might head over to Clinton with the rig in the morning.  There is a free dump station near the new police station and I want to check out the gray and black dump valves to make sure everything is copasetic in that department.  We might pick up some propane along the way as well just to make sure there are no surprises in that department either.  Seems to be some recent confusion as to what tanks can be filled and what tanks can't.  We'll see. 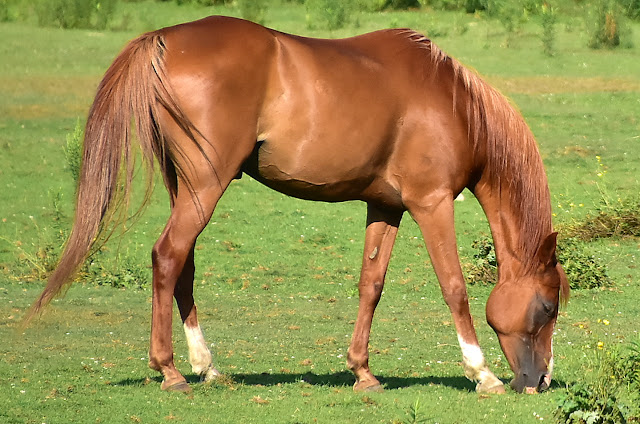 GROANER'S CORNER:((  Oh Those McNallys::
McNally was taking his first plane ride, flying over the Rocky Mountains. The stewardess handed him a piece of chewing gum. "It's to keep your ears from popping at high altitudes," she explains.  When the plane landed McNally rushed up to her. "Miss," he said,  "I'm meetin' me wife right away. How do I get the gum out of me ears?"
Just a week before that McNally was standing in front of Cohan's Tavern when he saw a driverless car rolling slowly down the street. He ran to the car, jumped in, and pulled on the emergency brake with a jerk.Kelly got out and very proudly said to the man approaching him, "I stopped it!""I know, you idiot!" said the man. "I was pushing it!"
And just a month before that, McNally's daughter knelt in the confessional and said, "Bless me, Father, for I have sinned."  "What is it, child?""Father, I have committed the sin of vanity. Twice a day I gaze at myself in the mirror and tell myself how beautiful I am."The priest turned, took a good look at the girl, and said, "My dear, I have good news. That isn't a sin - it's only a mistake."
================