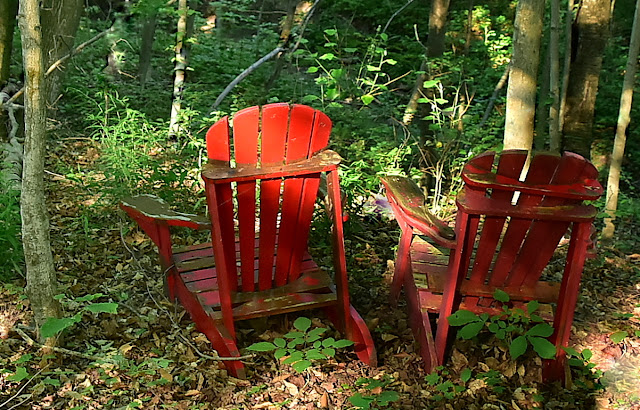 Despite another early start for Bugs and I this morning we barely beat the heat.  By 9 a.m. we were melting but at least before that, we had us a nice walk in a cool forest we had not been in before.  Along these many country roads here in southwestern Ontario are numerous bush lots with some of them having bush lanes leading in off the road.  One never knows where those bush lanes go and what lies hidden beyond in the deep forest.  This morning we stopped at a lane which we have passed by many times before.  Looking down the lane we could see a sunny clearing so decided to go have us a look.  Of course, I forgot to put bug spray on so the Mosquitos and Deer Flies waited until we were far enough into the forest before strategically ambushing us. 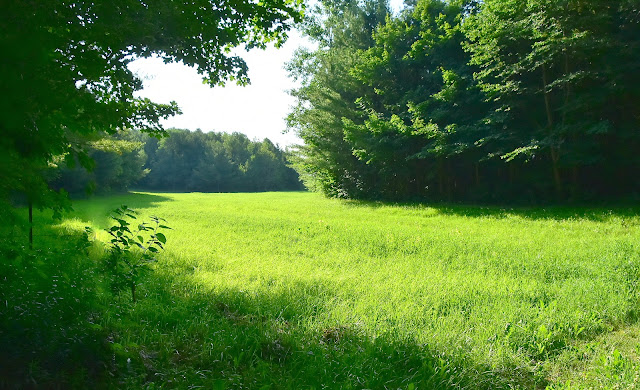 The clearing turned out to be a nice meadow with a creek running through it.  The bush continued on for a short distance before breaking into open fields to the northeast.  The forest on our left continued along the edge of a field.  Another partially overgrown lane led deeper into the forest so we headed in to have us a look. 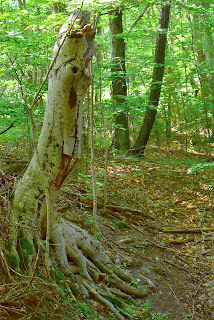 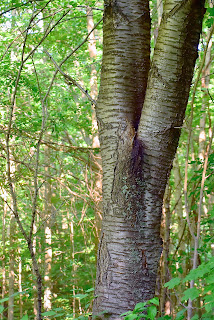 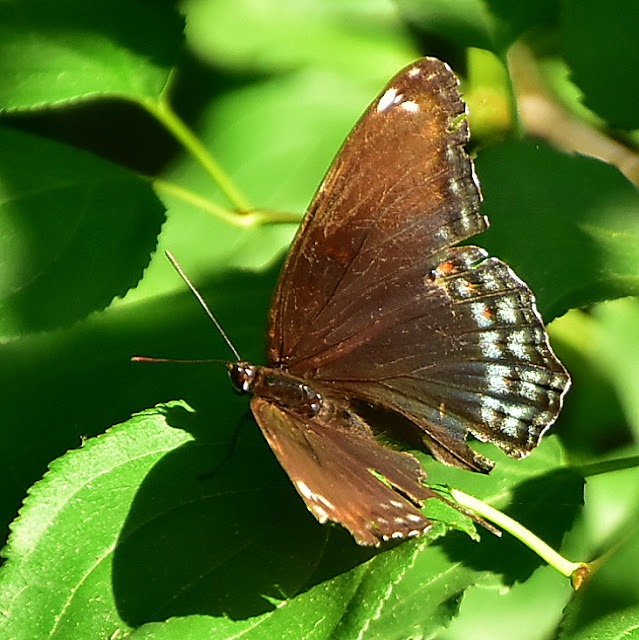 We had only walked maybe a couple hundred yards when I spotted what looked like an old lean-to.  Approaching closer I could see it was a teepee shaped campsite with some children's toys scattered around.  Lawn chairs with cobwebs on them and an old fire pit that hadn't seen any hot dogs or marshmallows for a long time.  Branches were piled up to make the lean-to.  An aging blackened Bar-be-que stood off to one side.  No, this wasn't the site of homeless people or hippies.  I'm guessing this was the site of the landowners farm family.  A little get-away camping venture for Mom and Dad and the kids at one time.  Or maybe the Grandparents spot for the Grand Kids.  Whichever scenario, I felt a touch of sadness thinking of all the enjoyment these farm folks may have had at this site at one time.  Gramma and Grampa may be gone now and the little kids may have grown into teenagers or young adults but no matter, the rustic campsite patiently awaits the squeals of children's laughter again someday as well as the gentle soft-spoken voices of Mom and Dad, Gramma and Grandpa and maybe Sparky the dog too.  The forest was quiet, but the memories lingered.  Then, while taking a photo of a couple old red wooden chairs something else caught my eye on the other side of a ravine. 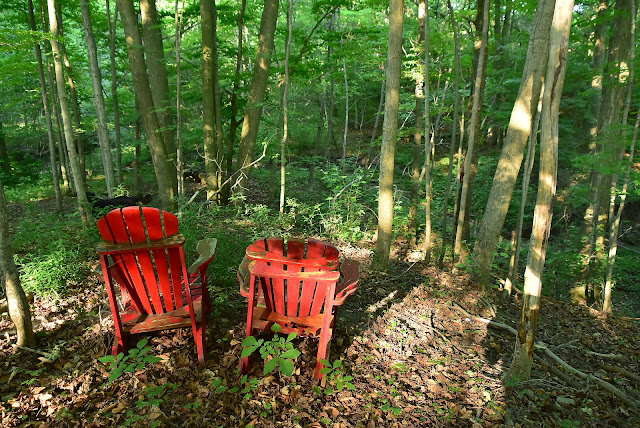 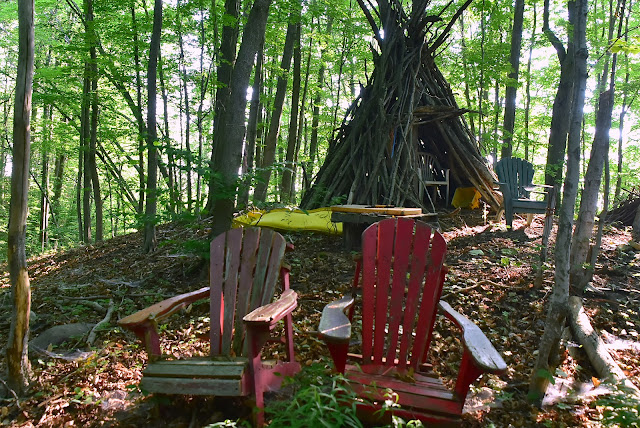 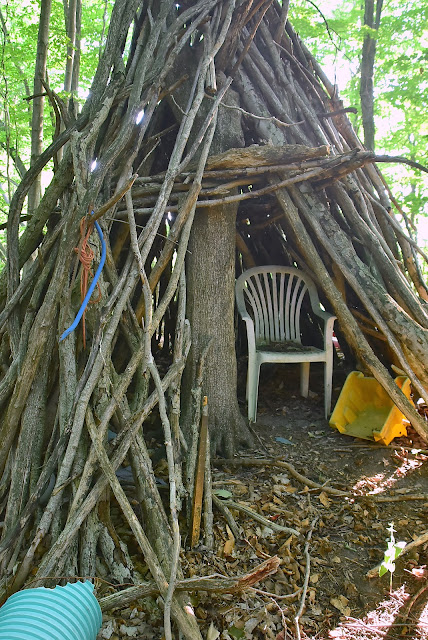 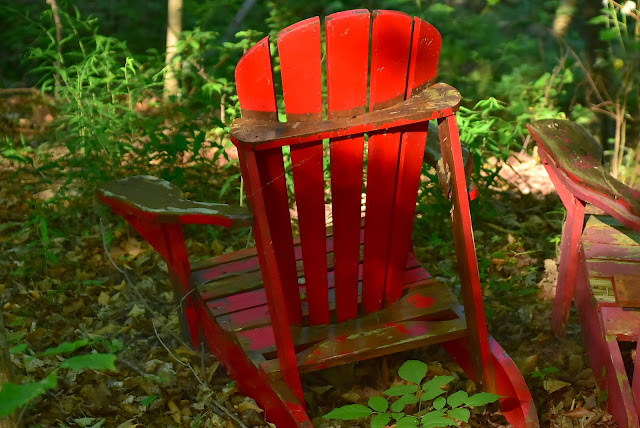 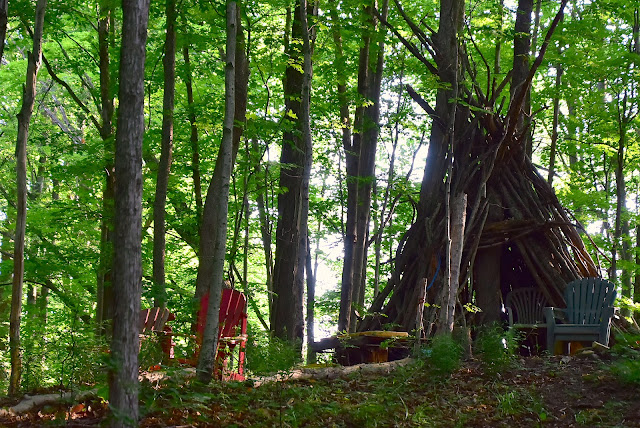 It was another campsite I saw through the trees, and then a third.   We scruffled our way down an embankment and were able to get close to one of the sites but not right up to it.  An old rickety wooden bridge spanned a narrow creek to the second campsite looking much like the one we had just stopped at.  I didn't attempt the bridge and just took a few photos across the little dry creek.  These wooden teepees may have been a couple farm families with kids who shared the forest and camped out together. 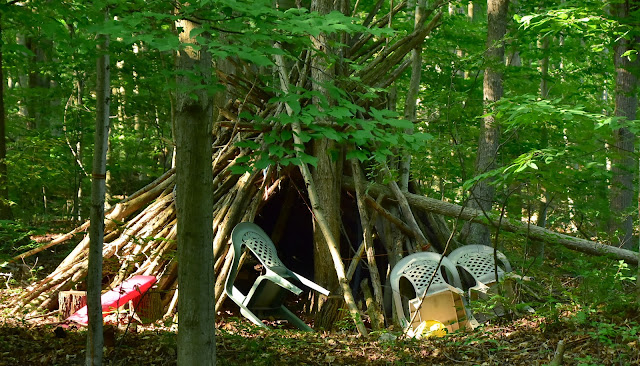 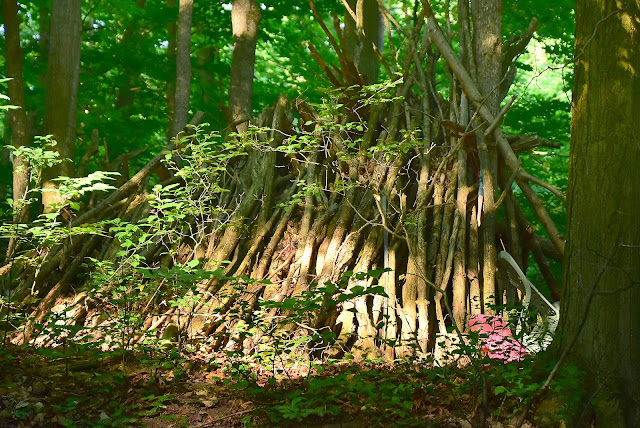 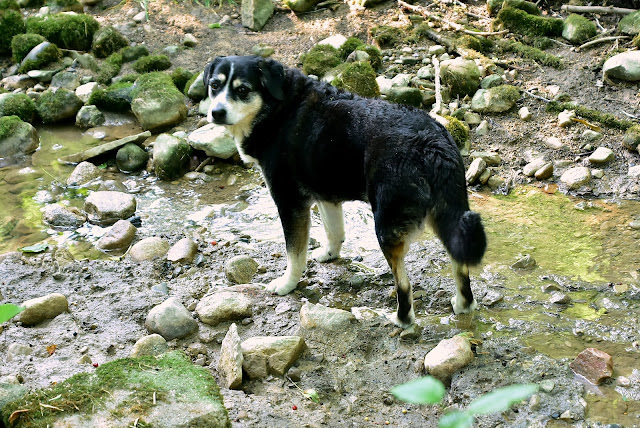 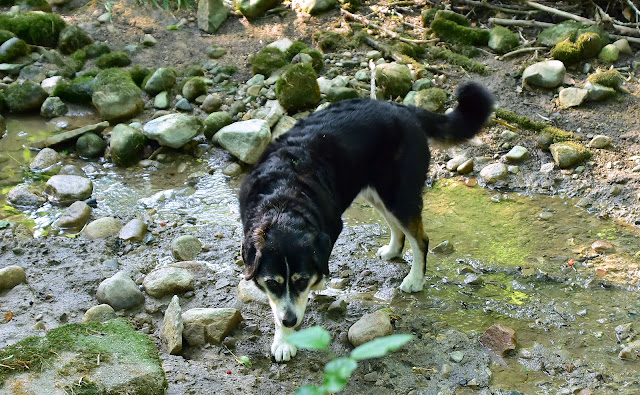 The third site looked like it may have been subjected to flooding as the creek rose in the Spring or after heavy rains.  It was lower on the forest floor than the other two sites sitting higher up on the creek banks.  An interesting find this morning and an area which I am sure has played its part in the wonderful memories of children, their parents, and grandparents alike. 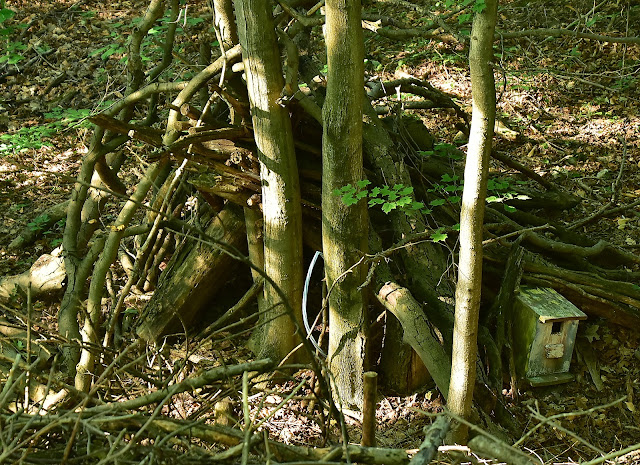 Walking back out of the forest into the open sunlight of the day the heat hit us like a blast furnace and we wasted no time making our way back to the Jeep.  It was immediately on with the A/C and up with the windows for a pleasantly cooling ride home. 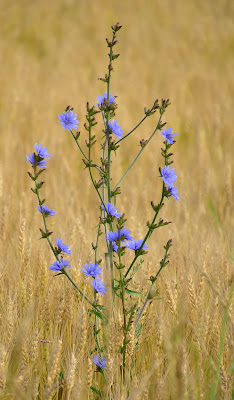 Looking ahead at the long-range forecast there appears to be no relief in sight for this heat.  Our daytime temps are in the high 80's and low 90's with our weather site saying it is going to feel like 100F for a couple days with the humidity factor figured in.  We are desperately in need of rain as well which the weather people say could very well happen this weekend.  Only saving grace is the cooler evenings, nights, and early mornings. 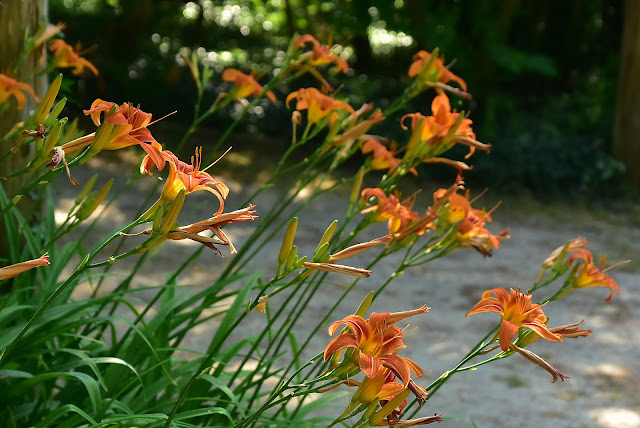 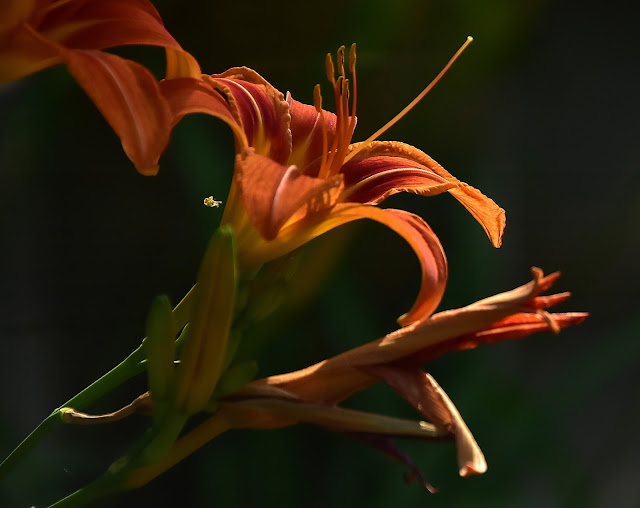 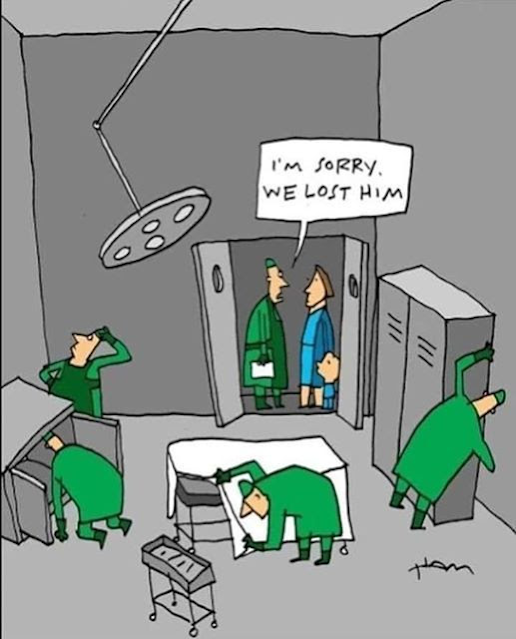