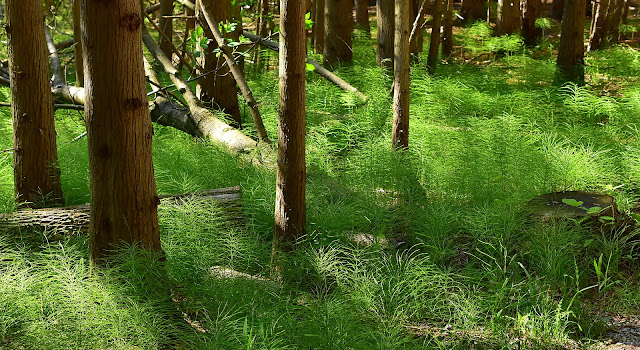 With great anticipation, Pheebs and I headed off to Goderich this morning looking forward to finally being able to drive the road out to Rotary Cove.  However, I misread the announcement about Goderich's beach being open again.  True, St. Christopher's beach area by the public washrooms has been opened but not the road to Rotary Cove.  Still lots of construction equipment down that way working on the shoreline restoration.  Could be a while before they get that open. 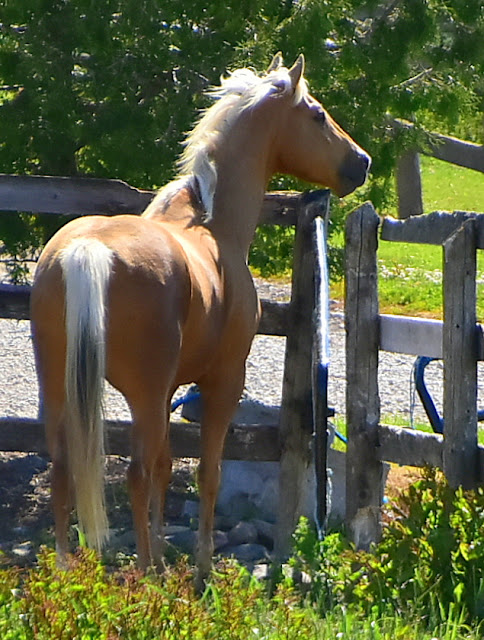 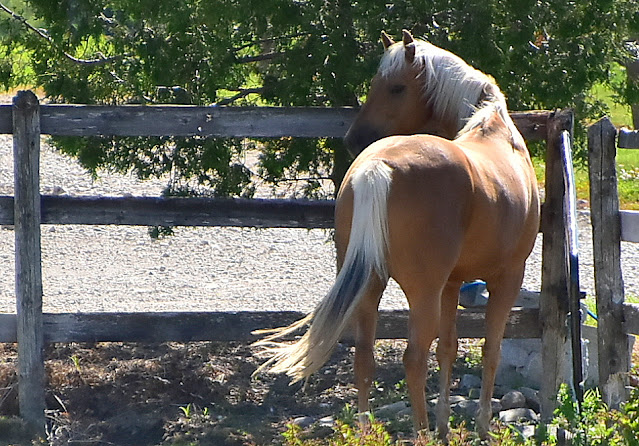 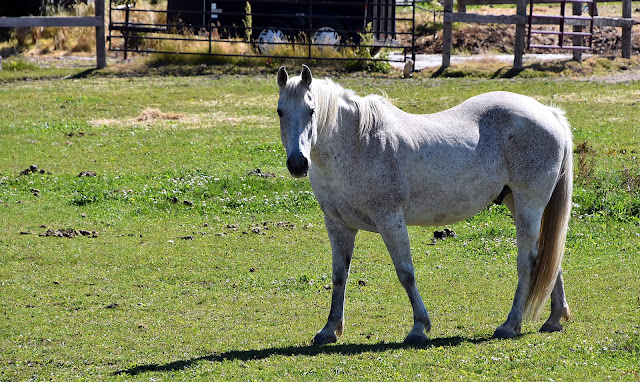 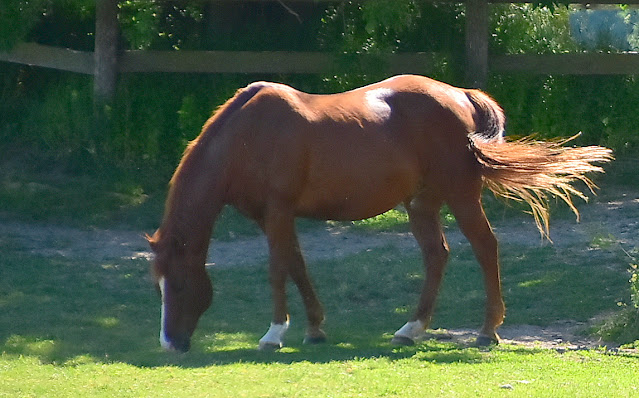 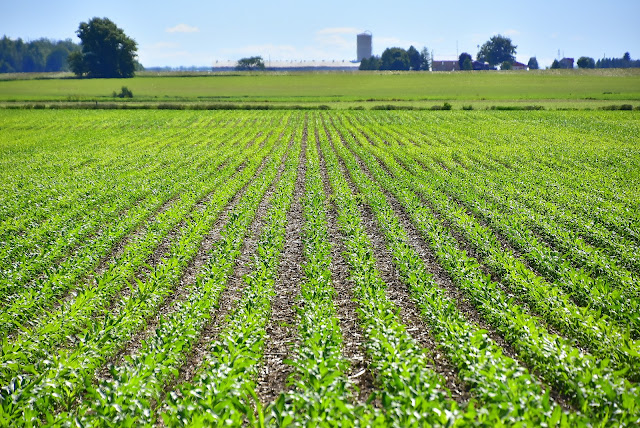 Disappointed, but not thwarted, Pheebs and I headed out south of Goderich to a place we haven't walked since last Fall.  Naftel's Creek Conservation Area.  One of the best walking and hiking areas around our area.  Luckily there were no cars in the parking lot so off we went on another cool fresh air and bug-free walk for the second morning in a row.  Our weather has been soooooooo perfect as of late. 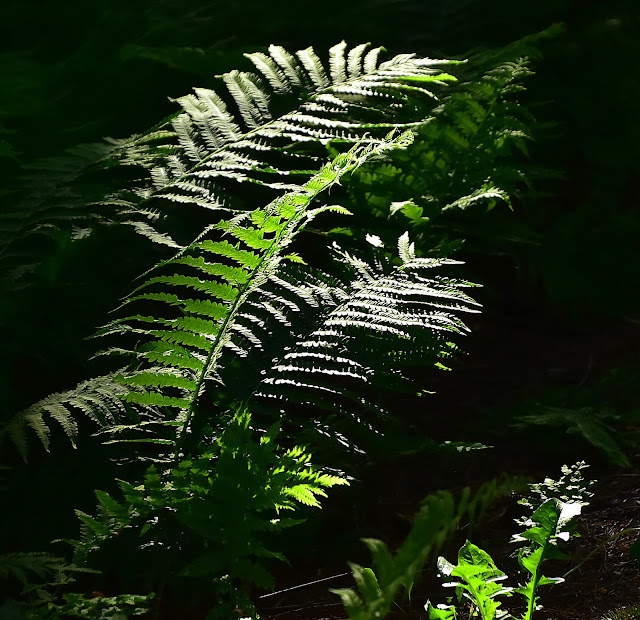 Naftel's Creek is made up of dark forests, a few slight hills, a ravine or two, marshy areas, a creek of course, and many hardwood and cedar trees.  There is even a hidden away little cabin beside a pond but we didn't take that trail today.  Aside from another old chap walking his dog we pretty much had the whole place to ourselves.  Had there been other people there we would have bypassed the area and headed for another less traveled forest not far away. 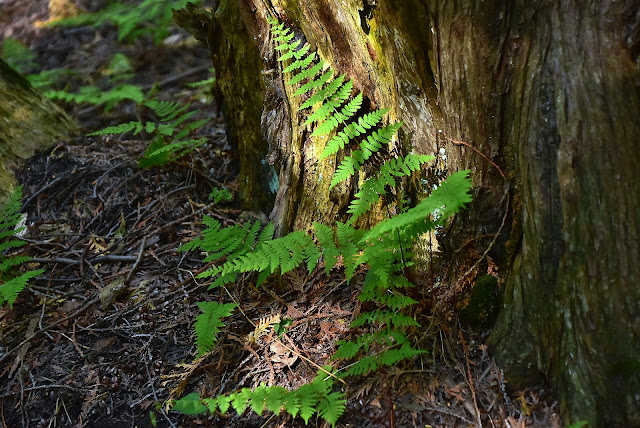 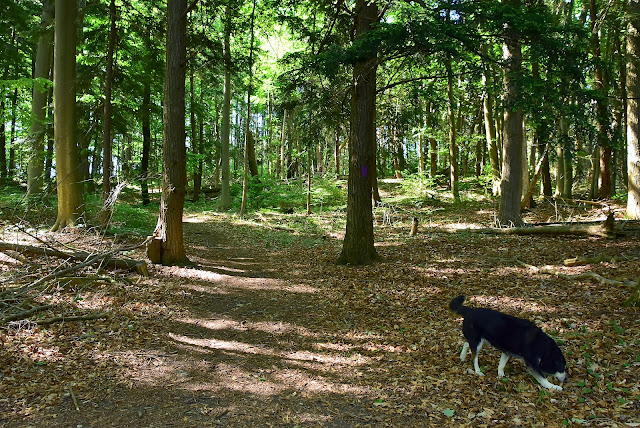 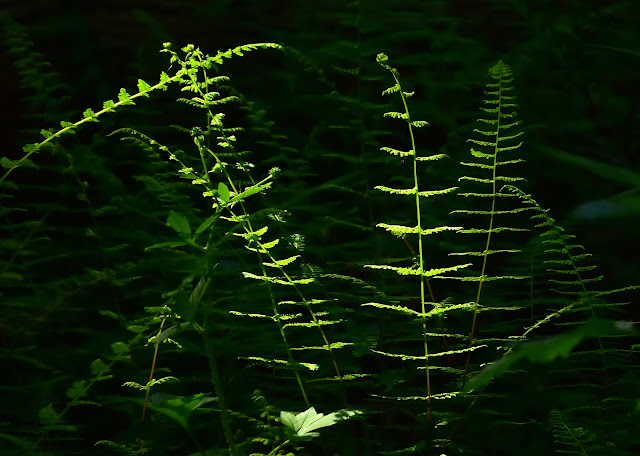 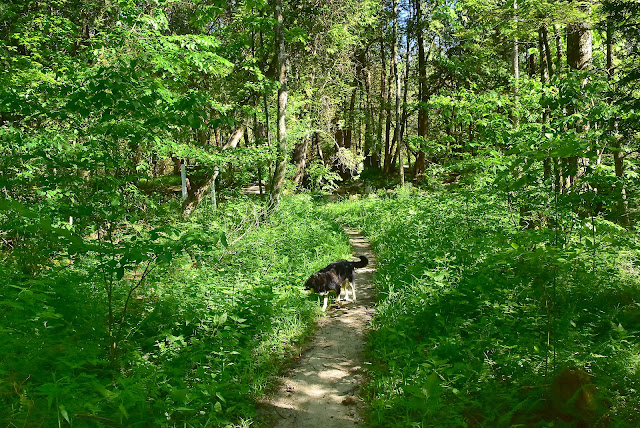 As much as I love sunny days it sure poses a few photographic challenges when trying to get exposures right in extreme lighting conditions running the gambit from extreme dark areas to extreme light areas such as in forests.  Dark featureless shadows compete with splotches of washed out bright sunlight piercing through the dark overhead canopy of trees.  I suppose if I had a better photo editing program I could maybe deal with some of those extremes but I'm limited as to what I can do with Picasa.  A very slight evenly lit overcast diffusing the sunlight is better in a way but it was sunny today and that's where we were and that's where we went. 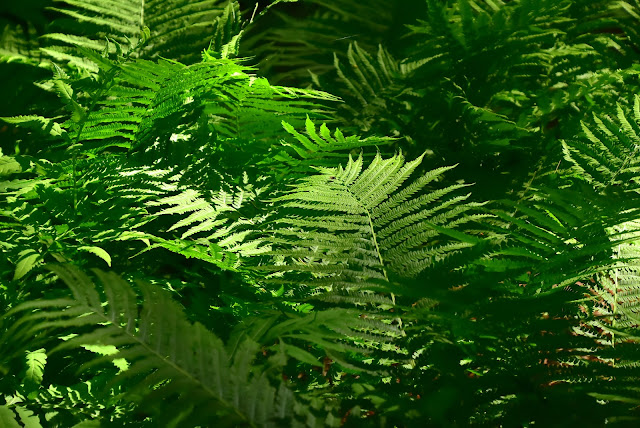 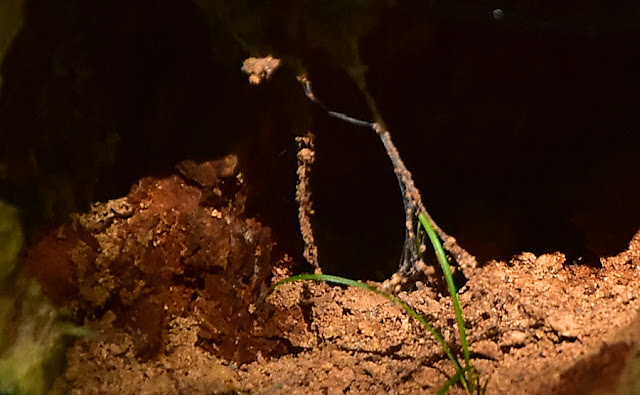 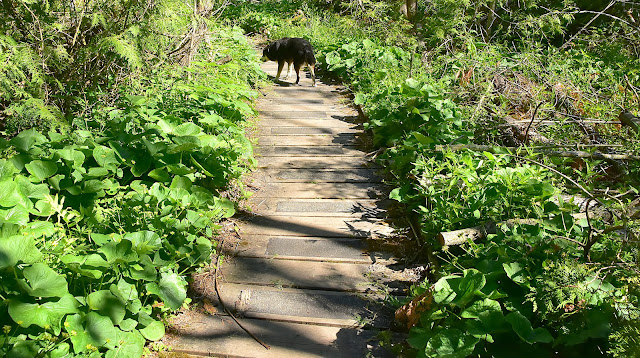 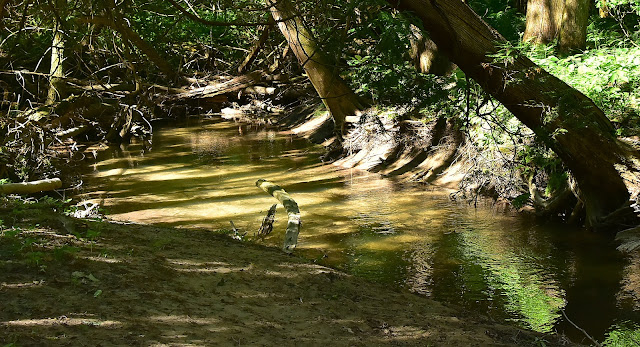 Our temperatures are slowly coming up.  Mornings and evenings are still pleasantly cool but in a few days, we'll be in the mid 80's again so that means the Mosquitoes will be out in full force as well as the humidity.  There will be no more enjoyable bug-free walks in the woods for us guys until the temperatures and humidity drop again.   Hope we don't have to wait until late September:(( 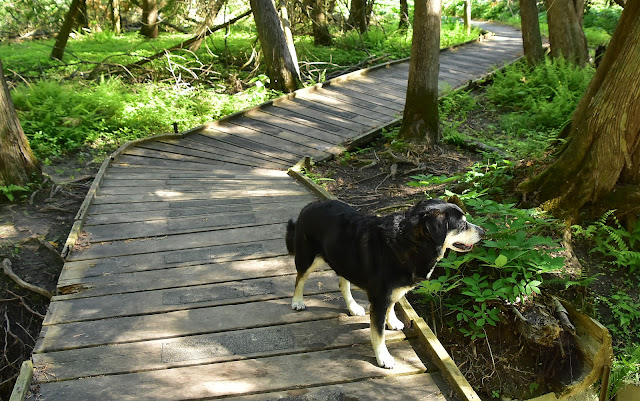 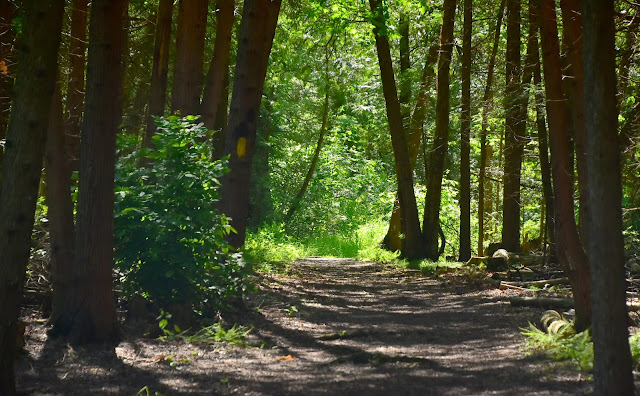 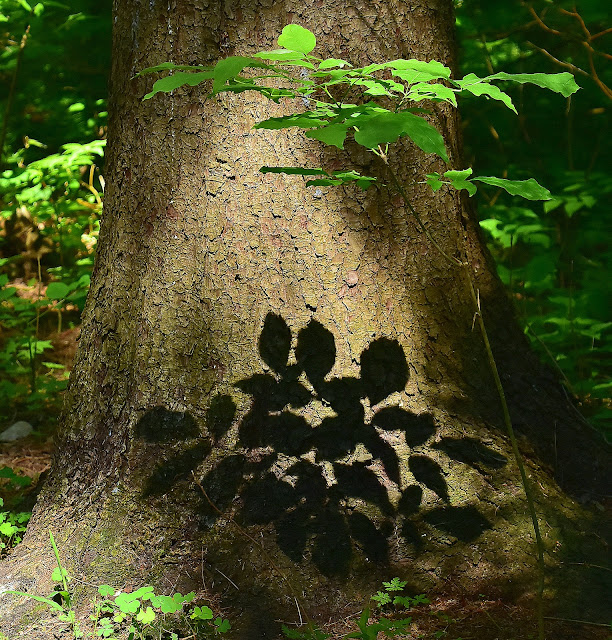 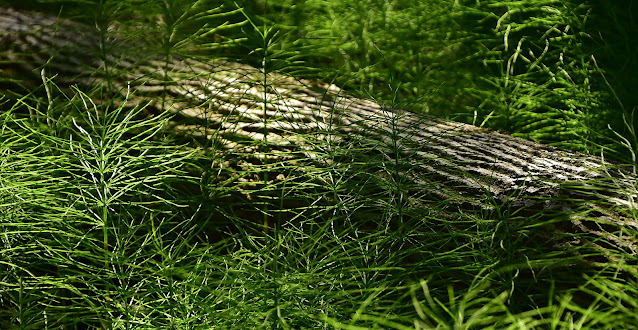 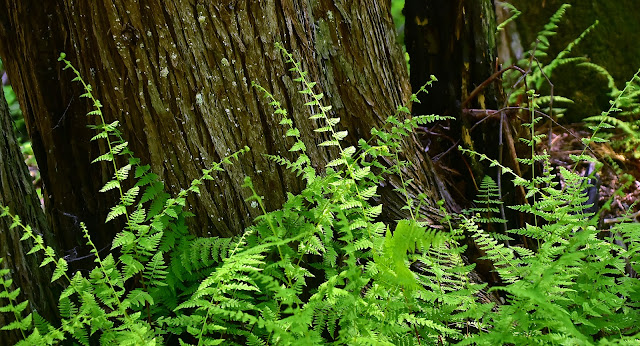 Little Chief Crazy Moose and I did make it out for another walk this afternoon back through our Park's forest.  We had to dodge some active machinery along the way but we remained unseen as we skirted around through the trees like a couple little nimble wood nymphs.
GROANER'S CORNER:((   Stock Market Report...
Helium was up, feathers were down.
Paper was stationary.
Fluorescent tubing was dimmed in light trading.
Knives were up sharply.
Cows steered into a bull market.
Pencils lost a few points.
Hiking equipment was trailing.
Elevators rose, while escalators continued their slow decline.
Weights were up in heavy trading.
Light switches were off.
Mining equipment hit rock bottom.
Diapers remained unchanged.
Shipping lines stayed at an even keel.
The market for raisins dried up.
Coca Cola fizzled.
Caterpillar stock inched up a bit.
Sun peaked at midday.
Balloon prices were inflated.
Scott Tissue touched a new bottom.
And batteries exploded in an attempt to recharge the market -------------------------------
Yesterday my husband thought he saw a cockroach in the kitchen. He sprayed everything down and cleaned thoroughly. Today I’m putting another cockroach in the bathroom.
===================== 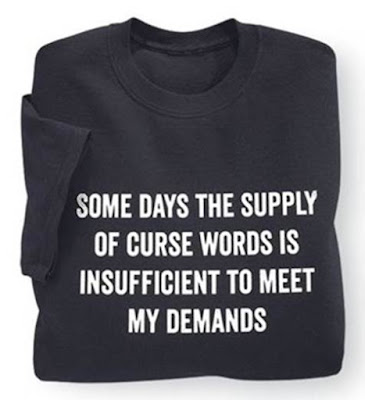 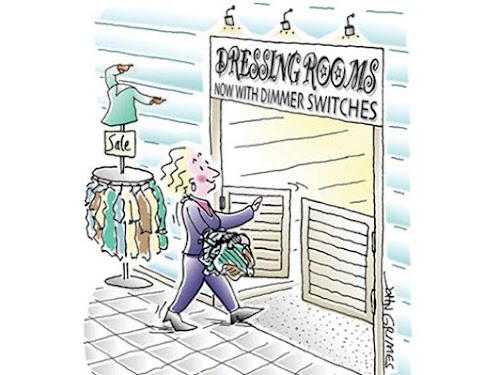