AFTER 7 LONG MONTHS GODERICH'S ROTARY COVE OPENED TODAY....AND PHEEBS AND I WERE THERE

On Friday November 29th 2019 I wrote, 'Work begins December 1rst by the town of Goderich Ontario to restore and strengthen their damaged Lake Huron shoreline.  Cove Road and pedestrian access leading to Rotary Cove and the dog walking area will be closed at the water treatment plant until further notice.  I'm guessing this project could last a month or two depending on weather with it's Winter storms.  The next photos I take in that area may show a fully restored shoreline. ' 'Fast Forward':: It is now nearly seven months later and today they finally opened 'most' of the road to Rotary Cove and it's beach area.  It is a trial run however.  If people flood in and make a mess of things like they did at Sauble Beach last weekend, Rotary Cove will be closed again until further notice.  Not wanting to miss out on seeing how the shoreline restoration work has come along, and before a whole lot of people show up, Pheebs and I were there for a look-see by 9 a.m.
For some reason, I had it in my head the whole restoration project would be complete before they opened it to the public.  Not so, but that's Okay because I understand them wanting to get Cove Beach opened up for people.  Still a lot of shoreline work to be done but what they have done so far is impressive.  On the lakeside of the road to Rotary Cove work crews have extended the shoreline out into Lake Huron in a few spots and are still working on that.  Biggest and most noticeable improvement I saw was in the dog walking area and I am happy to say they have pulled the large marble boulder from the water's edge where it had tumbled and placed it back up on shore pretty close to its original spot.  The badly eroded shoreline in this area has now been completely rebuilt using tons of huge boulders.  The parking area has been completely re-done as well making for much better parking.  I would say the crews have done a great job and it looks like work is still ongoing.  Grass seed to plant, etc.  Two thumbs up to all those who have worked on this project and to the results they have achieved. 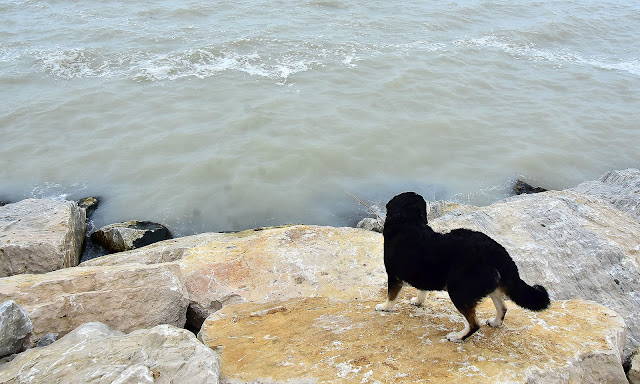 Part of the new boardwalk is complete in this area as well and it looks great.  It's wider than the original boardwalk and looks to be at ground level without drop-offs on either side.  Much safer for older folks I would think.  They probably have half to three-quarters of a mile to go before the boardwalk following the shoreline North reaches St. Christopher's beach at the other end.  The road in front of the Beach Street Station is still closed because of on-going work but the alternative (temporary) road to Rotary Cove runs through a large graveled area where the old train station once stood.  That old CPR train station was relocated a few years ago closer to the lake and is now The Beach Street Station restaurant.

Pheebs and I were back home shortly after ten a.m. and pretty much stayed inside for the rest of the day.  Our overcast and slightly foggy morning finally gave way to sunshine by early afternoon and that of course drove the humidity factor up especially after the overnight rain we had.  To keep myself from turning into a sticky ball of paste I had no choice but to stay inside where it was cool.  And that was about it for my day.......
GROANER'S CORNER:(( A man answers the phone and has the following conversation:"Yes, mother, I've had a hard day. Colleen has been very difficult - I know I ought to be more firm, but it is hard. Well, you know how she is. Yes, I know you warned me. I remember you told me that she was evil and would make my life miserable and you begged me not to marry her. I should have listened to you. You want to speak with her? All right."  He looks up from the phone and calls to his wife in the next room, "Colleen, your mother wants to talk to you!"

One day a college professor of Psychology was greeting his new college class. He stood up in front of the class and said, "Would everyone who thinks he or she is stupid please stand up?"After a minute or so of silence, a young man stood up.  "Well, good morning. So, you actually think you're a moron?" the professor asked.The kid replied, "No sir, I just didn't want to see you standing there all by yourself." 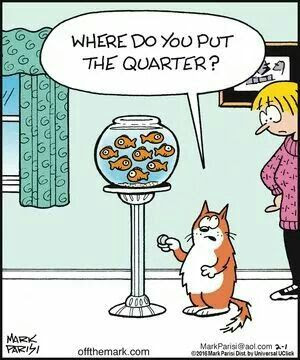