WE CONTINUE TO USE SOME 'GOOD OLD COMMON SENSE'

As expected we woke up to a white wintery world this morning and for awhile the snow just kept coming down.  It was looking very Christmasy outside and whenever that happens I hear Johnny Mathis in my head singing Sleigh Ride.  The bright side of course is that we knew today's snow wouldn't last with temps due to rise well above freezing today.  Glad this is March and not November.  And.....I have gone and taken waaaaay too many photos again today so I will include a few here in the post and the rest in a photo album entitled, Overnight Snowfall.  Hope you go over and take a look. 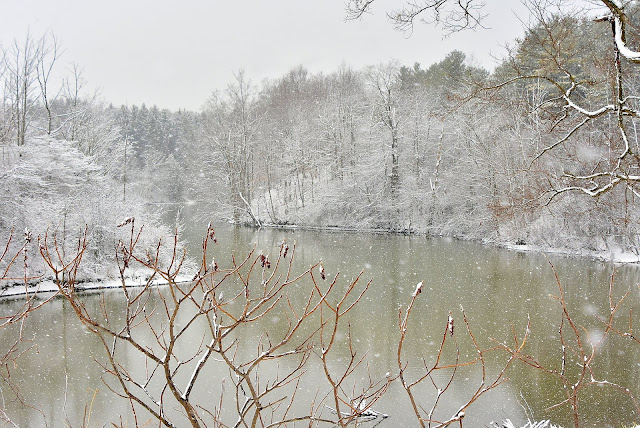 Needing milk, bananas, and a few other things I debated where to go.  Walmart in Goderich or Foodland in Bayfield.  Decided Foodland was the logical choice so off Pheebs and I went.  Only 2 cars in the parking lot and 3 customers in the store.  Didn't see anybody running around like a chicken with it's head cut off panic buying.  Shelves were well stocked with only a few small bare spaces here and there. 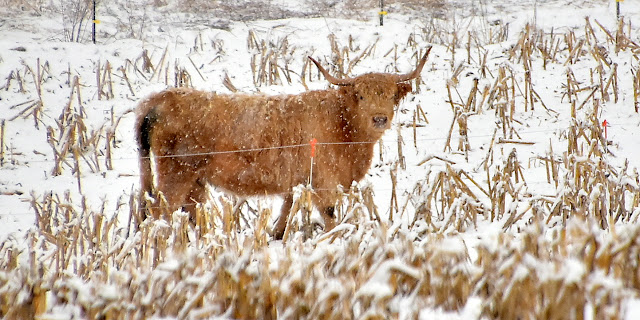 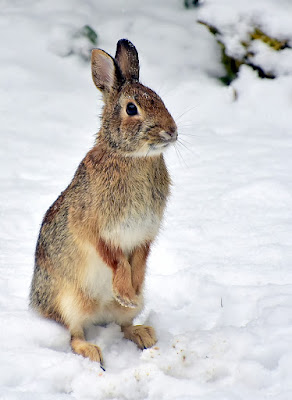 Roads were wet and slushy with a mixture of snow and rain in the air.  Not wanting to turn around a go right home after the supermarket we ventured out east of Bayfield taking a few photos here and there along the way.  It was so nice to be out enjoying this morning's pretty winter like scenery.  We were home again sometime before ten. 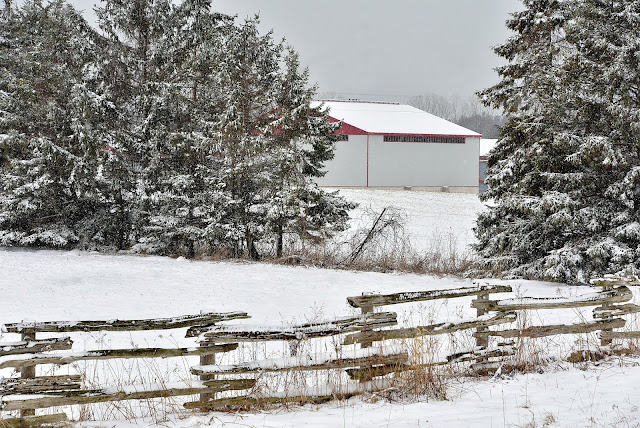 Nothing like a snowfall to bring birds in clamoring for space at the bird feeder.  Blue Jays, Mourning Doves, Cardinals, and 3 different types of Woodpeckers.  Grackles and Dark Eyed Juncos were also there along with Black Cap Chickadees.  On the ground representing the furry guys were Black Squirrels, Bunny Rabbits, and Chipmunks.  Even Little Red made an appearance and made off with half a cob of corn. 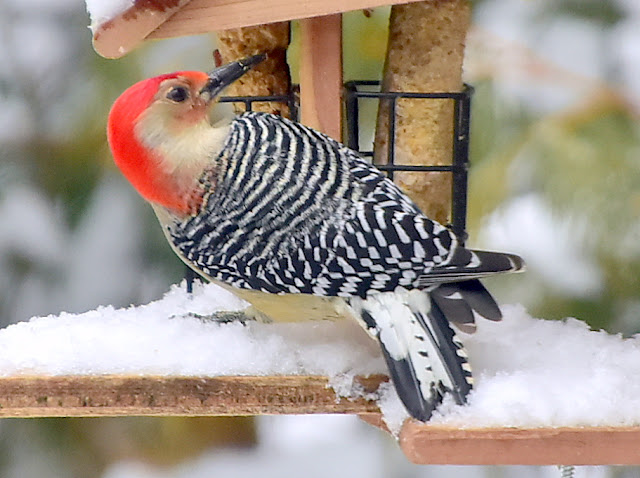 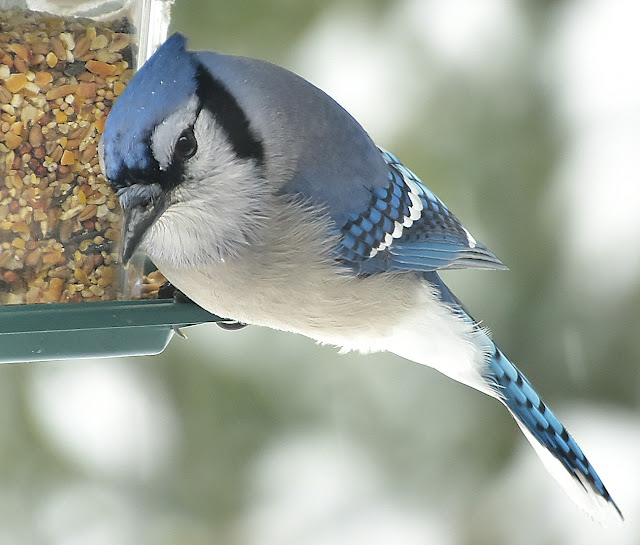 In regards to 'saving the rock' at Goderich's Rotary Cove dog walking area (Monday's post) I sent Art's Landscaping an email asking if they could save that rock.  They emailed back saying it was out of their hands and to contact the Goderich Works department directly so that's what Kelly did this morning by sending my email to several different Goderich Works departments.  Hopefully it gets to the right person and that marbled rock is spared.  Probably won't know until I can get back down to that area at some point in the future.
Although we only had maybe an inch of snow which was melting anyway I still put on my winter boots for our afternoon walk because of the snow, water, and mud.  Bit of mist in the air which sometimes happens with slightly warmer air meeting colder snow.  Nice to see Ducks and Geese still on our Park's pond. 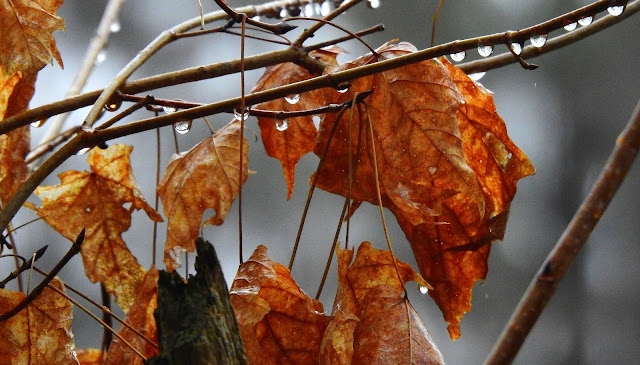 We are still keeping ourselves updated with the Covid-19 dilemma and doing what is suggested by 'the people who know what they are talking about'.  We are also leaning heavily on our own common sense as well.  Frustrating to see how many are simply flipping the whole thing off as a lark or accusing others of over re-acting.  And then of course there are those individuals in the younger generation with the 'party-on Dude' attitude.  Aww yes, the naivety of youth that so many of us went through ourselves and remember well.  I still sometimes have to shake my head and ask myself, 'how could I have been so dumb'!!
GROANER'S CORNER:((  A well-worn one dollar bill and a similarly distressed twenty dollar bill arrived at a Federal Reserve Bank to be retired. As they moved along the conveyor belt to be burned, they struck up a conversation. The twenty dollar bill reminisced about its travels all over the county. "I've had a pretty good life," the twenty proclaimed. "Why I've been to Las Vegas and Atlantic City, the finest restaurants in New York, performances on Broadway, and even a cruise to the Caribbean."  "Wow!" said the one dollar bill. "You've really had an exciting life!" "So tell me," says the twenty, "where have you been throughout your lifetime?"  The one dollar bill replies, "Oh, I've been to the Methodist Church, the Baptist Church, the Lutheran Church ..." The twenty dollar bill interrupts, "What's a church?"
-----------------------------------
- Doctor, Doctor I think I'm a bell?  Take these and if it doesn't help give me a ring!
-  Doctor, Doctor I think I'm suffering from Deja Vu!  Didn't I see you yesterday?
-  Doctor, how do I stop my nose from running?!  Stick your foot out and trip it up!
-------------------------------------

When my son graduated from high school, he had to give a speech. He began by reading from his prepared text.  'I want to talk about my mother and the wonderful influence she has had on my life,' he told the audience. 'She is a shining example of parenthood, and I love her more than words could ever do justice.'  At this point he seemed to struggle for words.  After a pause, he looked up with a sly grin and said, 'Sorry, but it's really hard to read my mother's handwriting.'
================== 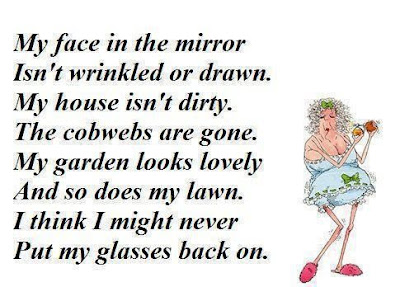 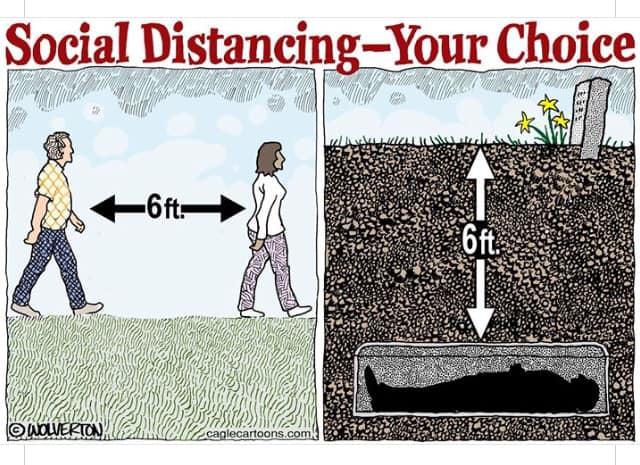