THERE WERE RUMBLES OF THUNDER HIDDEN IN THIS MORNING'S HEAVY SNOWFALL

For Pheebs and I it was a very different start to the day.  Due to a heavy snowfall coming down I decided it would be better if we held off our Jeep ride at least until the snow had stopped.  I knew visibility would not be good.  Well, the snow didn't stop and just kept on coming down.  Our front yard was a furrily feathered hive of activity complete with Squirrels, Blue Jays, Juncos, Mourning Doves, Cardinals and Chicadees.  I could see snow building up so hustled outside and grabbed my snow shovel.  Snow covered up the corn kernals as fast as I tossed them on the ground for the furry guys,  Imagine how startled I was when a large and loud peel of thunder rolled overhead from west to east.  And like the snow the thunder didn't let up for the five minutes I was outside.  I can't recall ever hearing thunder during a heavy snowfall before.  But then again, I like many others cannot recall a lot of things anymore:((
Checking our live radar weather map I was discouraged to see this snowfall feathering in off the lake could very well last a long time.  The warmer lake water mixing with the colder air is like a high production snow factory and with our usual prevailing winds from the northwest it drives that heavy snow onshore and inland.  I disgruntingly settled myself in for a long boring day.
It was 9:45 and it was like someone turned the snow machine tap off.  It just stopped.  Pheebs and I were out the door so fast Kelly never even knew we had left.  Needing bananas we headed for Goderich.  I was also down to half a jar of peanut butter and that of course constituted a national emergency.  Luckily Walmart had my favorite peanut butter on sale at 2 for the price of 6.  What a bargoon eh:)) 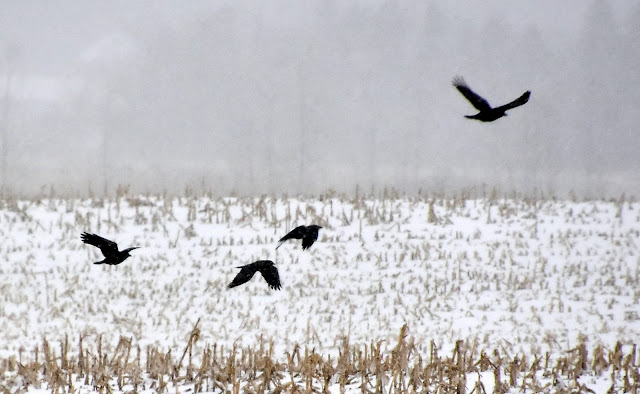 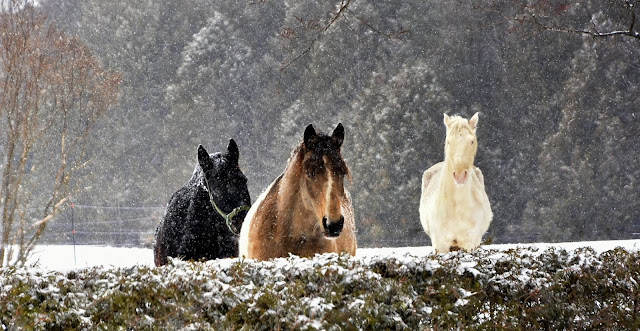 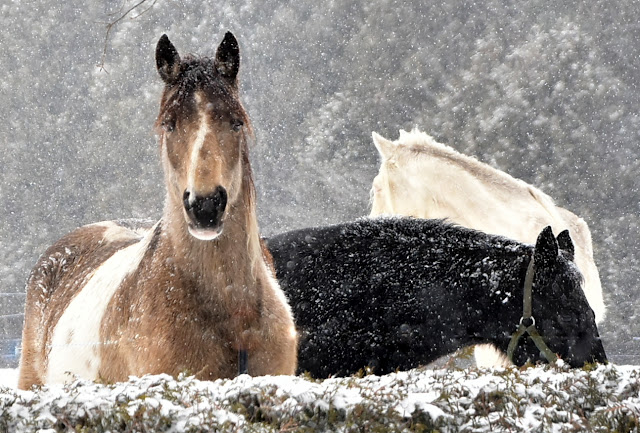 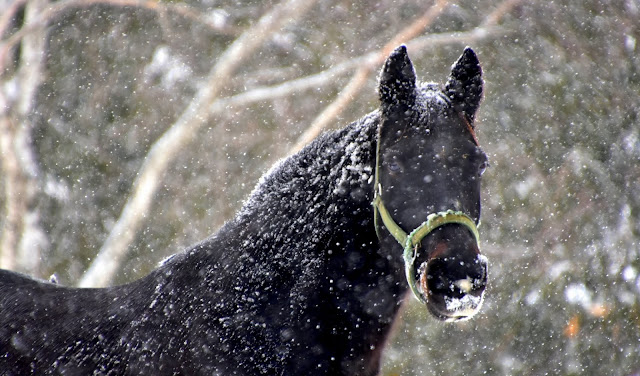 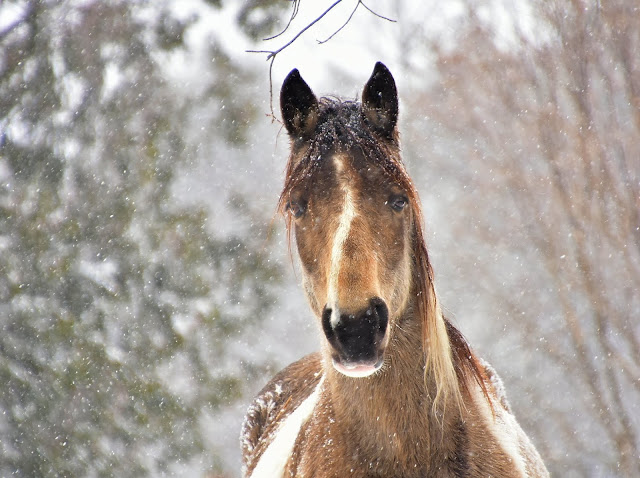 Also wanted to slip down to the harbor and have a look at how the shoreline reconstruction was coming along.  Cold and bleak with wind driven snow coming in off the angry dark colored waters of Lake Huron.   Seemed to be a lot of brackish sludge coming ashore in one area.  It was just too blustery to exit the Jeep to check on the shoreline work so Pheebs and I didn't hang around long.  Grabbed a few quick photos and got ourselves back into the warm Jeep. 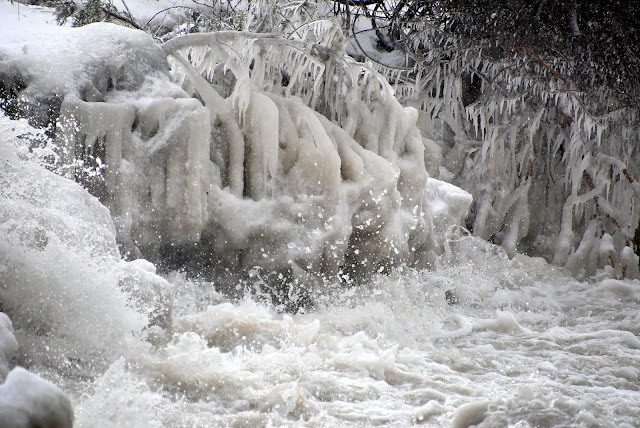 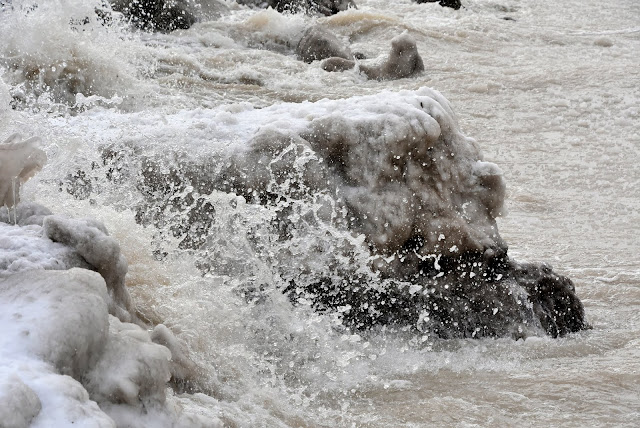 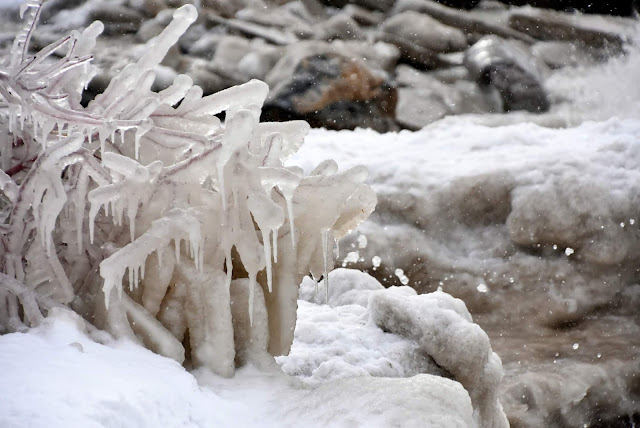 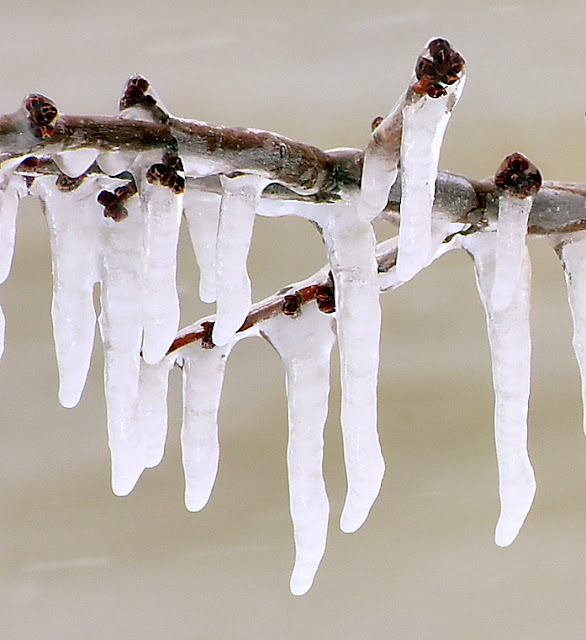 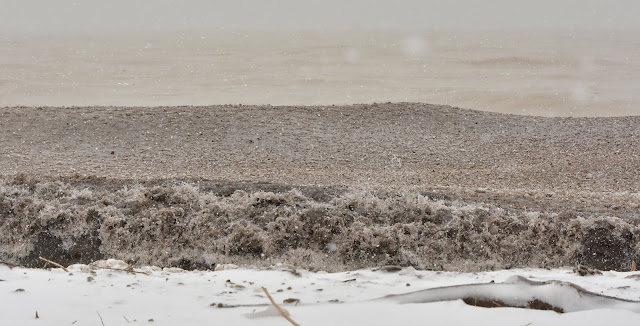 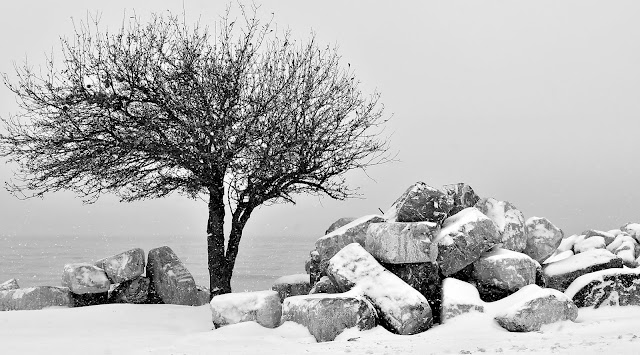 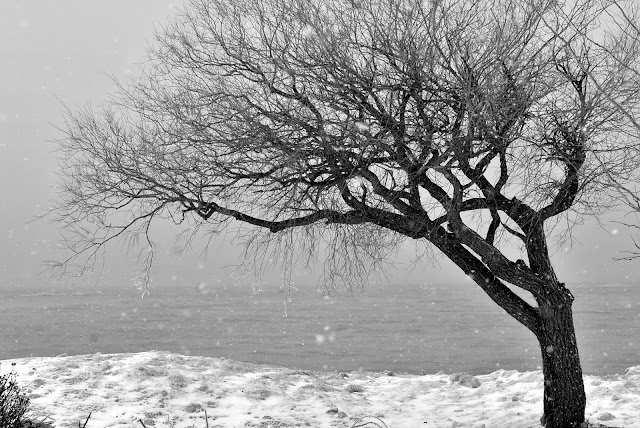 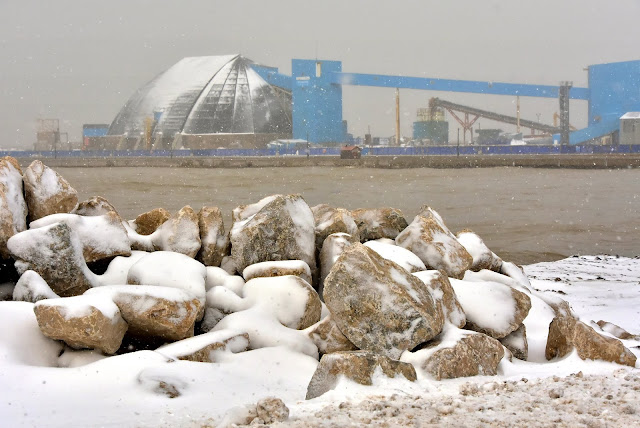 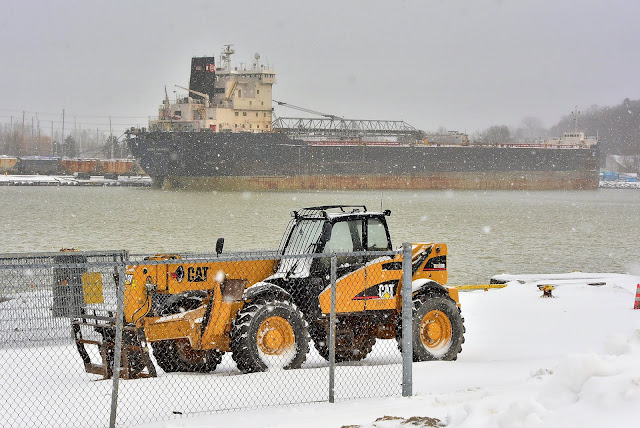 Heading back up through Goderich I saw a lot of folks digging out from the recent snow squalls.  With no other plans and the weather not suitable for a walk anywhere we headed ourselves home. 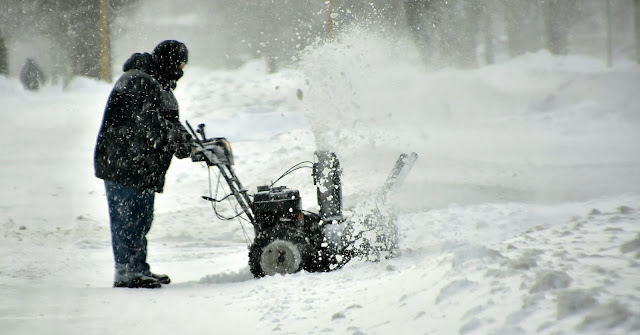 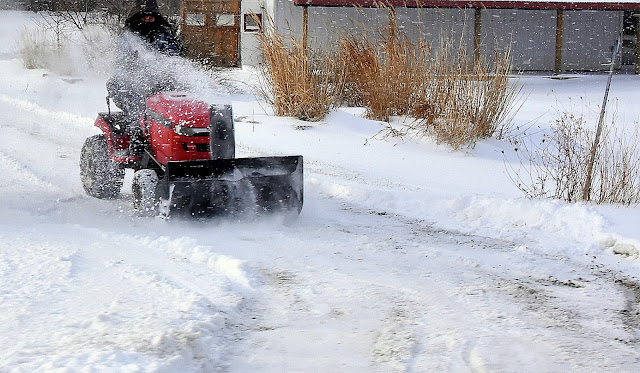 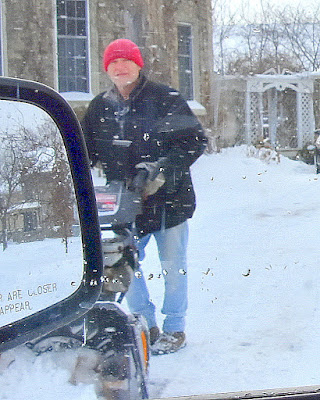 On our way home I could see sunshine trying to make it's way through heavy snow clouds and I was encouraged by that.  Snow still falling but not as thick and heavy as a few spots earlier in the day. 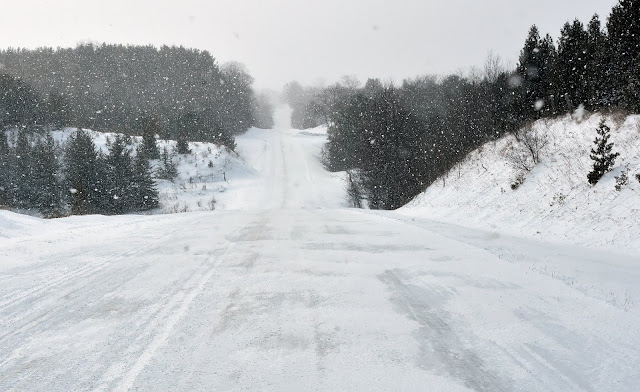 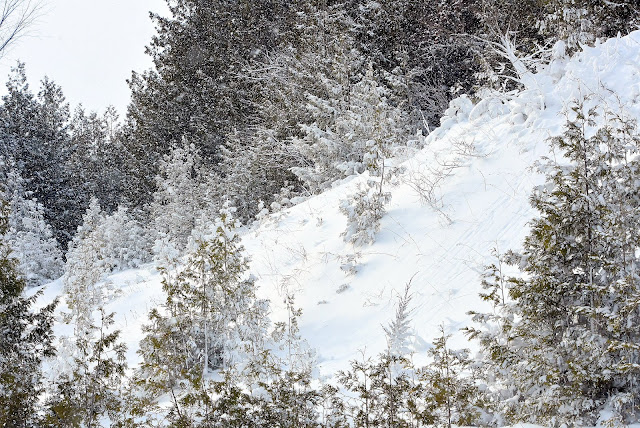 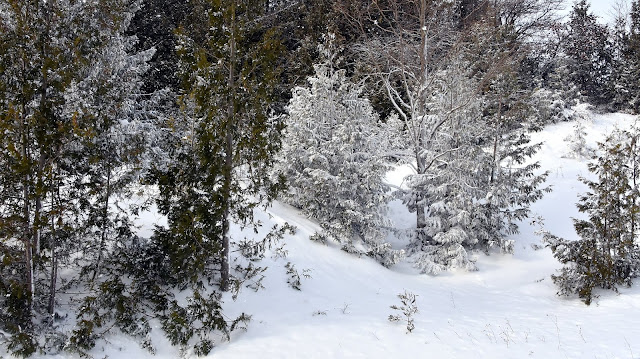 Soon as I backed the Jeep into the carport I was out the door and onto the end of my snow shovel again.  Our temps had come up slightly over the freezing mark late Saturday night so this morning's snow was heavier and I could sure feel it with each shovel full I moved.  We were in the mid to low 20's today falling from Saturday night's 32.  We did end our day in sunshine when skies partially cleared late afternoon.  Looks like temps slowly begin to rise Monday and we should be in the mid to upper 30's by Wednesday.  Bonus:)) 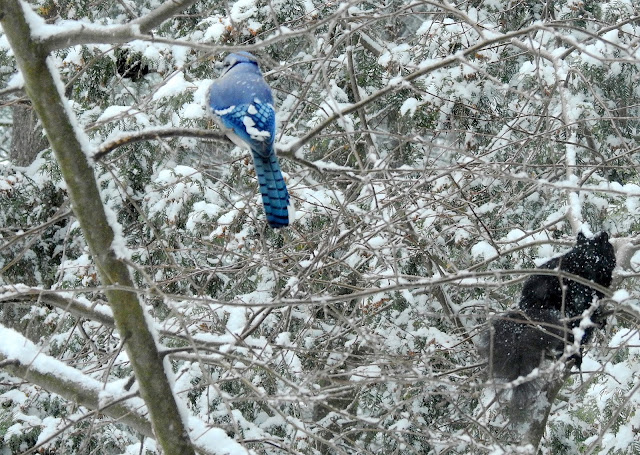 ::Memory Lane::  In last night's post I mentioned a fire in Borrego Springs Palm Canyon where a grove of Palm trees had burned.  From the pictures I saw it looked like the same grove we hiked up to back on December 22nd 2007.  Here is my post for the day our desert friend Butch took us on a hike into the San Ysidro Mountains along the Palm Canyon trail.  Hiking Palm Canyon Near Borrego Springs, California.  My photo album for the day is here at Palm Canyon. 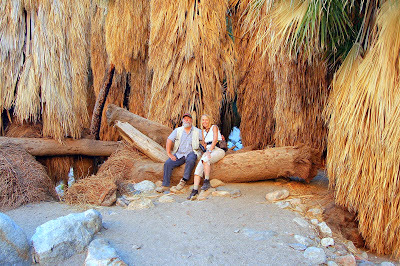 ::Al's Musical Favs:: Conjuring Rain by Angel Tears::  I have no idea what this man and woman are saying but it doesn't matter, it's the sound I find soothingly appealing. 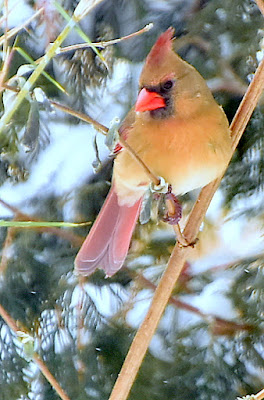 - You live close enough to town to get garbage service, but don't use it because they won't come down your driveway to get it.
- The fellows on the big garbage moving equipment recognize your wife.... and wave to her.
- Your wife picks thru your garbage cans looking for any bait that may have grown in them since the last time you went.
- You have ever removed the 3-9 zoom scope from your deer rifle to use at a KISS concert.
You have more than 2 used pampers rolling around in the back of your truck.
- When you put your hunting boots on you only get them on the right feet 50% of the time.
- Your idea of a neighborhood watch program is tuning into "America's Most Wanted".
-  You recycle enough Copenhagen lids to buy Christmas presents.
----------------------------
Mr. Magic: I can turn this handkerchief into a flower.
Little Johnny: That’s nothing. I can walk down the street and turn into an alley.
----------------------------------
- A patient walks into a doctor's office. Patient: Doctor, people ignore me.
Doctor: Next!

When were King Arthur's army too tired to fight?
When they had lots of sleepless knights!

Teacher: You copied from Fred's exam paper didn't you?
Pupil: How did you know?
Teacher: Fred's paper says "I don't know" and you have put "Me, neither"! 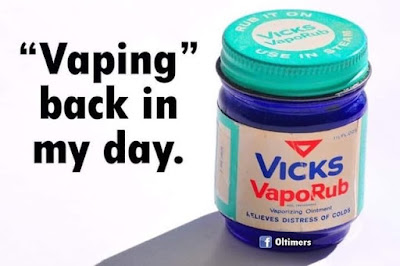 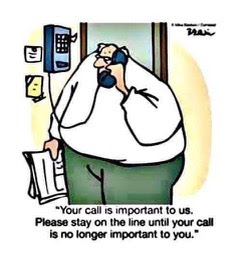