Even with windows and doors tightly closed against nature's cold we could hear a steady roar outside upon awakening this morning.  No we don't have lions here but we did have huge winds ripping through our area.  Both Kelly and I were surprised our power was still one.  Usually in past years if someone in the Park sneezed our power went out.  Letting Pheebs out our back door Kelly noticed our deck had a thin coating of ice on it as well.  Being surrounded by tall pine trees and with high winds and freezing rain present we usually have branches and sometimes a tree come down.  Maybe so but our power was still on.  Very much most amazing.  ::Update:: I wrote the above paragraph around seven o'clock this morning.  Forty five minutes later while slicing some celery into my morning shake...'Poof' and our power was gone.  I knew I shouldn't have mentioned it!!
Well what to do.  Stay in the house looking out the window until the storm passed or venture out to see what we could see.  There has always been an undeveloped photo journalist lurking inside me and it was that adventuress side of myself which had me out the door, into the Jeep, and down the road to check things out.  Pheebs too:))


In four wheel drive Pheebs and I slowly made our way North on Porters Hill line.  Thought for sure I would see branches down but nope, only a couple dozen twigs.  Not another vehicle to be seen anywhere.  Paved road surface was iffy but 4WD held the traction until near Goderich when I noticed the road ahead had a glass like appearance.  A wind gust moved the Jeep slightly sideways and I knew right away I was on ice.  Foot off the gas, carefully steer, and we were fine.  From there to number eight highway we eeked our way along with a very light touch on the controls.  I knew once we reached the highway in another mile or so it would be salted and sanded.  And it was.  We were soon the only vehicle going through Tim Hortons drive-thru for a hot coffee and carrot muffin to go.  The girl at the drive-thru didn't even notice I didn't have my teeth in or else she would have started laughing, pointed her finger at me and hollered for the staff to 'come over and have a look at this':((   With coffee in hand we made straight away for the harbor and beach areas.  Two large freighters were in port with one being at the Sifto Salt Mine dock and the other at the Goderich Grain Elevators.

Slipped along Cove Road to the far end and headed back.  No point in stopping at the Dog walking area with cold wind driven rain coming down.  Actually it rained all the way to Goderich and back this morning.
Rolled out Goderich's south end staying on the salted #21 highway all the way back to Bayfield.  A quick drive through the village to see if their power was out (it wasn't) and we headed home.  Coming around a sharp curve near our Park I saw an old dead tree down across the road.  There was no way I would be pulling that off to the side so had to reverse ourselves, head back towards Bayfield, take a couple other roads and access our Park from a different direction.  Pulling into the Park I didn't see any lights on through any windows so knew our Park's power was still out.  It was 9:05.  With no electricity I knew our furnace wouldn't work but luckily we installed a free standing gas stove in the sunroom about ten years ago and Kelly was quite contentedly sitting in my recliner right beside it toasty warm reading.  She had put a call in to the Power Company and they said power would be restored by ten thirty.  Ten thirty came and went with the power company calling back saying all would be well by noon.  Noon came and went too with both Kelly and I sitting on either side of our warm little stove.  Temperatures slowly began to rise as we watched icicles slowly at first begin to drip.  And then at twelve fifty it happened and with a 'fizzle and pop' our power was finally back on after five hours and five minutes.  An hour after that the power company (Ontario Hydro) sent a text saying they were still having problems and hoped to have our power restored by 3 o'clock.  Well oh gee thank you very much..…….All in all I think we got off pretty lucky here in our area.  Storm could have been a lot worse and wasn't.  In fact temps are now on the rise again and it looks like most of our days for the next couple weeks are above freezing with one day maybe reaching 40F.  At the time of posting tonight we have a little drizzle in the air with temps sitting on the freezing mark.

Almost hate to jinx myself by mentioning the following but I think my new Verilux Happy Light might just be helping me.  I know it hasn't even been a week yet and I may end up eating my words of course but weather and especially the darker rainy days has not been gloominizing me as is often the case.  Not going to push my luck so I'll not say anything more about it until next month some time.  Just know I've been feeling more like :)) than :((
Surprisingly, despite trying three times to breach my latest defences Squirrely was unable to reach the suet feeder today.  Well at least not while I was watching him.  Below you can see his three attempts in about five minutes.  I'm sure he'll be back tomorrow and figure things out then. 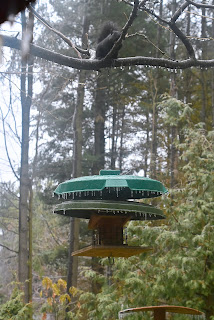 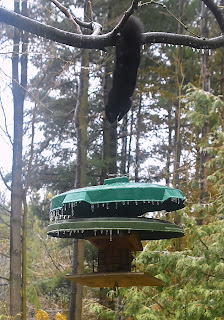 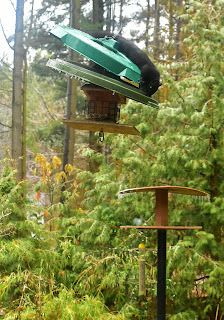 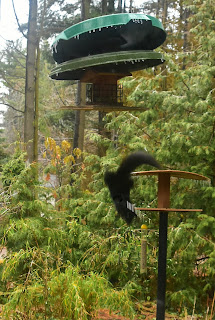 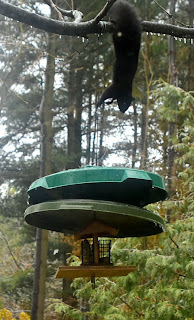 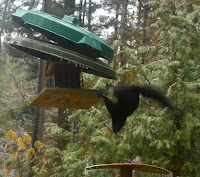 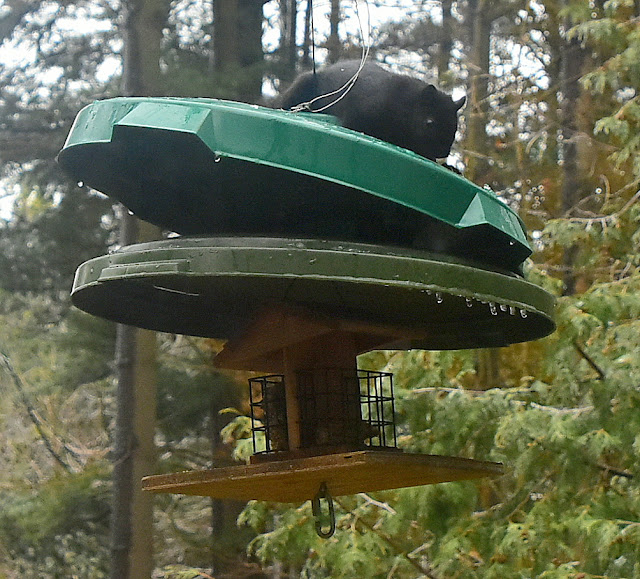 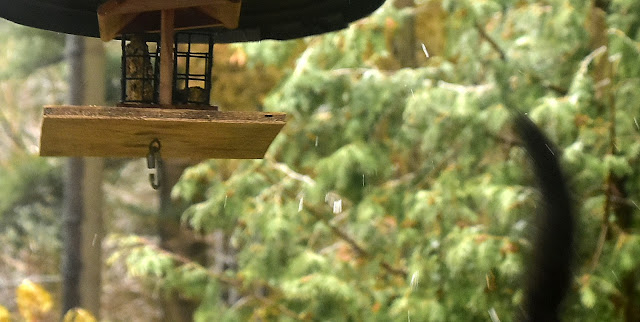 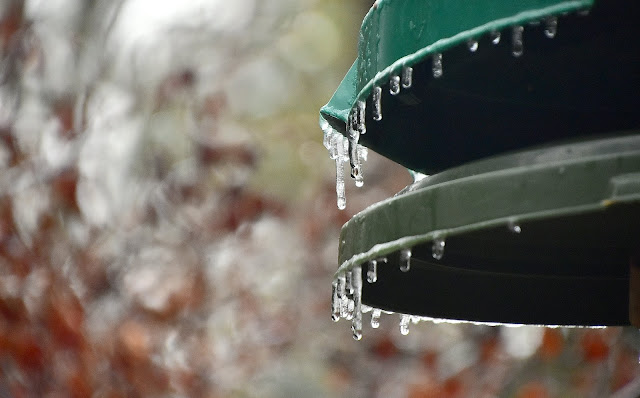 ::Memory Lane::  November 21rst 2011 finds us on a lava flow walk at New Mexico's Valley Of Fires.  My post for the day is here at Thunder, Lightning, And Rain In The Desert.  My photo album for the walk is here at Lava Flow Walk
GROANER'S CORNER:((  Two cowboys come upon an Indian lying on his stomach with his ear to the ground. One of the cowboys stops and says to the other, "You see that Indian?"
"Yeah," says the other cowboy. "Look," says the first one, "he's listening to the ground. He can hear things for miles in any direction." Just then the Indian looks up. "Covered wagon," he says, "about two miles away. Have two horses, one brown, one white. Man, woman, child, household effects in wagon." "Incredible!" says the cowboy to his friend. "This Indian knows how far away they are, how many horses, what color they are, who is in the wagon, and what is in the wagon. Amazing!" The Indian looks up and says, "Ran over me about a half hour ago."
===================