It is increasingly tempting on these cold cloudy and snowy mornings to simply stay inside but I've been trying my best not to fall into that state.  To stay in just seems to lengthen the already long wintery like gray days.  Stepping out the door I could tell temps had come up a bit to the point where snow was crunchy underfoot.  Another couple degrees and we'd be up to the freezing mark.  Downright balmy I'd say. 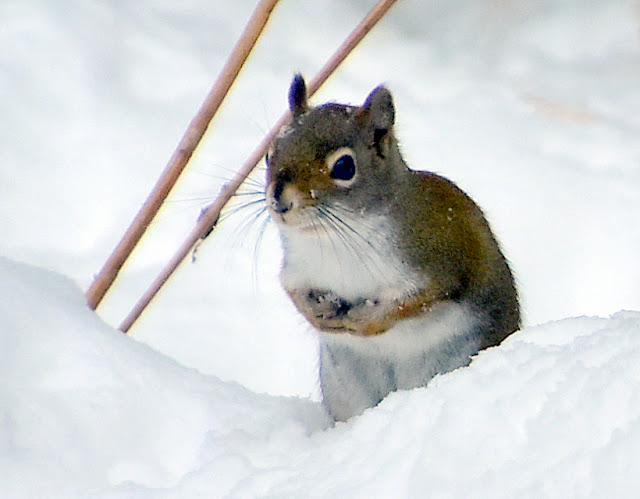 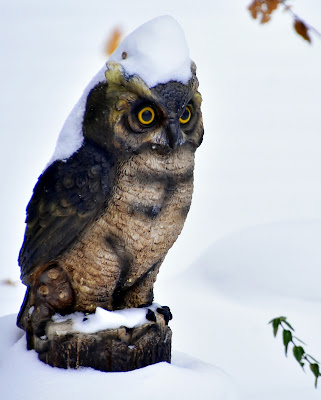 Aside from a swing through Bayfield and a short jaunt around a country block we really didn't get ourselves too far again this morning.  One of the country roads we frequent didn't have any tire tracks on it yet and with the snow being slightly heavier I decided to forego being the first one to blaze a trail through.  I have not only got too soon old but I've got almost too late some smarts too.  We went back to Bayfield's cemetery and blazed some tracks around the roads in there.  I guess they only plow the cemetery roads if there's a burial. 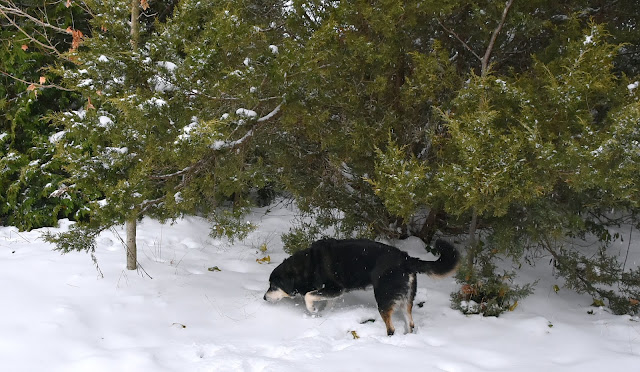 Home again I did the usual snow shovelling thing and came in.  Spent the rest of my day in the sunroom watching a wee bit of TV, bonking around on the computer and watching the zany antics of the furry and feathered wildlife in our front yard. 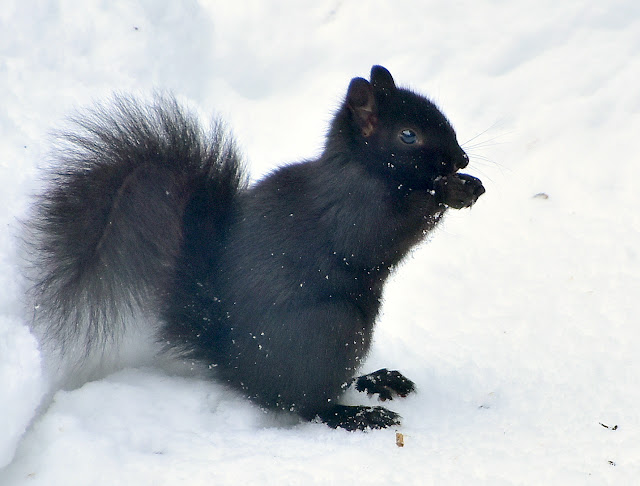 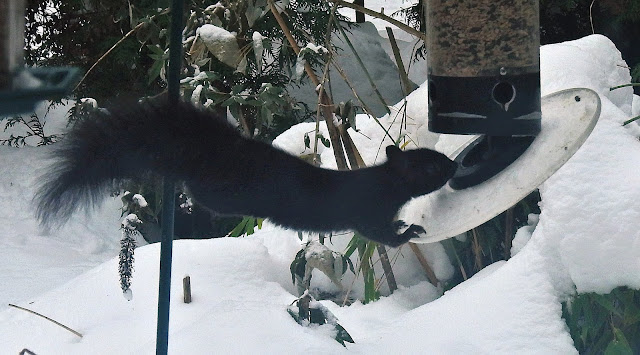 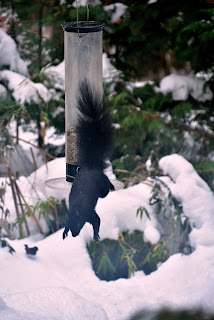 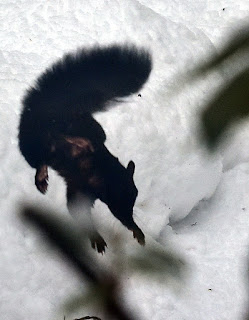 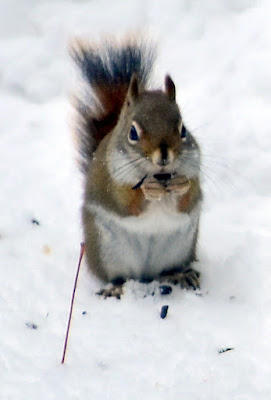 It's a real challenge trying to get even a few half decent bird photos with the low light drabness outside.  And shooting dark colored birds against a stark white snowy background doesn't help.  Can't use any fill-in flash either because I am behind glass.  And I have to try and get a handle on the graininess (noise) in my photos as well.  Birds in flight photos were much easier at our Congress Arizona house years ago.  Lots of sunlight, colorful birds, and no contrasting white background.  I really must make an effort to get all those bird photos of mine rounded up and put into an album or two. 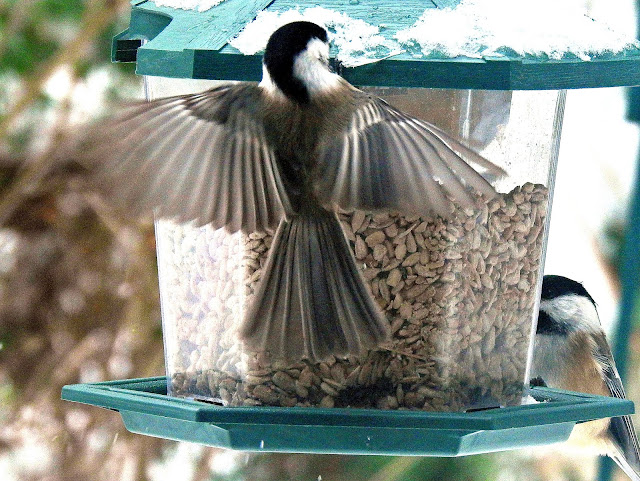 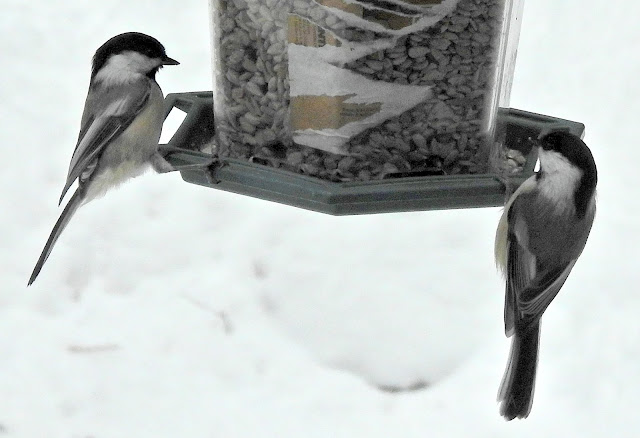 Our landline phone hasn't been working for a couple days so Kelly on her cell phone called in to Bell Telephone Wednesday to let them know.  Said they would be here today sometime between 8 a.m. and 5 p.m. but they never showed up.  Kelly phoned back tonight and was actually able to contact a real live human being although that human being was rather hard for her to understand.  I 'think' they might be sending a technician from India tomorrow.
GROANER'S CORNER:((   One day, an elderly woman was walking along the street, coming home from the supermarket. Her bag of groceries was especially heavy that day, and as she passed Nathan Hale's Used Cars, she got an idea that she could drive herself home and save a lot of shoe leather, time and aching muscles. She walks into the car dealership and, as it just so happens, gets the owner himself. He asks her what kind of car she wants and she replies,  "Well, sonny, I can't remember the name exactly, but it has something to do with hate or anger."  The owner replies, "Well, let's see... Oh yes, you want a Plymouth Fury! We have a couple on the lot.  What color do you prefer?"  The lady has some trouble explaining the exact color to him, so she reaches into her shopping bag, takes out an ear of corn, strips down the shucks and says, "I want this color."  To which Nathan replies, "Ma'am I'm sorry, but we don't have any in this color. Could I show you a nice blue one?"  "No son, I want this color."  "But ma'am, they didn't make that color! Maybe a cherry red one would suit you?" says the owner, obviously worried about losing a sale.  By this time, the old lady gets mad, and starts throwing things at the owner, thereby chasing him out of the office and into the lot. One of the salesmen, coming into the office from the back door, notices the disruption and asks the secretary what the old woman was so upset about.  The secretary replies, "Apparently, Hale hath no Fury like the woman's corn!"
--------------------------------
My wife is incredibly smart. When I called her from my buddy’s phone she answered, “Hey love!” She already knew it was me.
=================