Although we don't have an unobstructed clear view of morning's sunrise due to trees we can still see the orange, red, and yellow glow in the clear early eastern sky.  And I can see it right from my recliner.  As the Sun slowly rises it's rays tumble through our big living room window splashing across the floor, through the kitchen, and up the hallway.  Always a heartening way to start the day knowing blue sunny skies are once again upon us.
Pheebs and I wandered out around the Hullett Marsh but with some of the roads leading into the Marsh still closed we didn't venture in and instead slowly worked ourselves around some country roads on the way home.  With temps in the low 40's we were able to have Pheebs window down with a bit of heat on.  She likes it when her windows down but she's not one to stick her whole head out the window into the wind.  Just sits there in the seat looking out like we people do.

So nice to see and hear returning birds to the area.  On our recent Jeep rides it has been Red Wing Blackbirds and Killdeer we have been hearing the most along with Canada Geese and Crows.  At home here at the feeders I've seen several Blue Jays, a Cardinal, two Mourning Doves, Black Cap Chickadees, Nuthatches, a pair of Downie Woodpeckers, Robins, and a dozen or so Dark Eyed Juncos.  So nice to see all my birdy Pals coming back.  And a surprise in our front yard frog pond this afternoon.  Despite this winter's record breaking cold I clearly saw a Goldfish at a hole in the ice and I'm pretty sure I saw a second one moving along slowly under the thin ice cover. 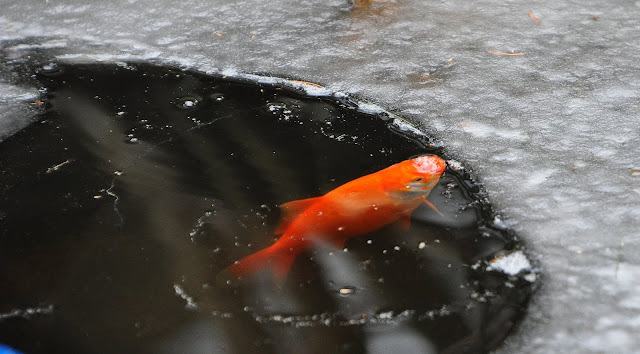 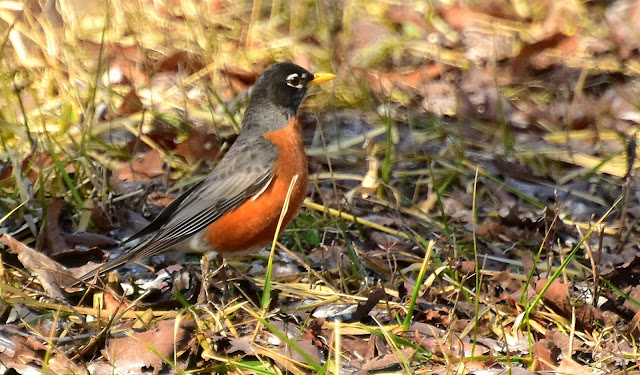 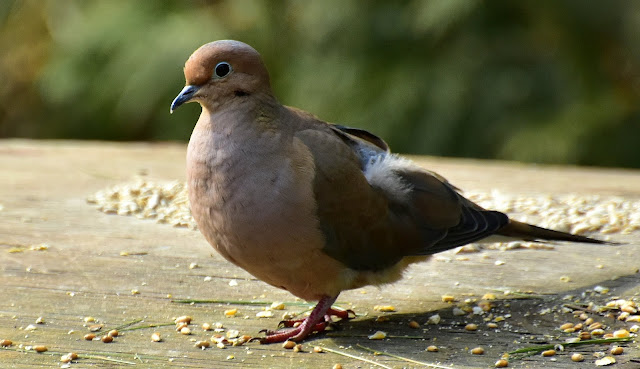 With Facebook 'Friend Requests' continuing to come in I have to say again, I do not accept friend requests.  Been hacked twice years ago doing that so no more.  I know most people mean well and I thank you for your genuine requests but please don't be offended when I do not accept them.  I'm not a Facebook person to begin with and basically only use it to drop my post in at the end of each day.  Thanks to you few folks who hit the 'Like' button and occasionally leave a comment.  I do see and appreciate that.  And thank you to last night's commenters for your kind words and continued support.  And of course a very big thank you once again to 'Spring' which officially arrived this afternoon at 5:58 P.M.   And right on time too:))
Our morning sunshine gave way to an afternoon cloud cover so Pheebs and I headed out for a walk before the predicted rain showers began.  Hadn't walked the Park's Pine Tree Trail since late last Fall but everything looked pretty much the same.  A few small trees and branches down but that was about it.  Pheebs met her old Pal Dexter on the trail who had his Dad out for a walk as well

GROANER'S CORNER:(( Because of an ear infection, Little Johnny, had to go to the pediatrician. The doctor directed his comments and questions to Little Johnny in a professional manner. When he asked Little Johnny, "Is there anything you are allergic to?" Little Johnny nodded and whispered in his ear. Smiling, the pediatrician wrote out a prescription and handed it to Little Johnny's mother. She tucked it into her purse without looking at it. As the pharmacist filled the order, he remarked on the unusual food- drug interaction Little Johnny must have. Little Johnny's mother looked puzzled until he showed her the label on the bottle. As per the doctor's instructions, it read, "Do not take with broccoli."
----------------
- My youngest son asked me how old I was.  I answered, "39 and holding.  "He thought for a moment and then asked, "But how old would you be if you let go?"
------------------------
A missionary, in Africa, was out taking a walk in the jungle. Suddenly, he heard a noise from the brush in front of him. It was a lion. He started to back up and heard a noise from behind. Sure enough, it was another lion. He looked to his left and then to his right. You guessed it, lions were on both sides. It looked grim, so the missionary sat down where he was and started to read his Bible. Shortly after he started reading, the lions jumped the missionary and ate him.Moral of the story: Never read between the lions.
=====================