I THINK WE ARE SOMEWHERE EAST OF THE CHUCKWALLA MOUNTAINS

Despite a couple 18 wheelers in the large paved lot behind Ehrenberg's big new 76 gas station it was a quiet night with no disruptions.  Most traffic goes into the nearby crowded and noisy Flying J on the south side of I-10.  Maybe it's because they have a Wendys there.  I like this nice big 76 station for it's easy in and out spaciousness with it's own separate gas and diesel pumps for RV's.  Two thumbs up for the spacious clean and neat new 76 station.  We've never been big Flying J fans anyway.

Well, where to go today??  Had several spots in mind so by 8:35 we had the big wheels rolling west on I-10 towards Blyth California only a few short miles away.  We were on familiar turf again having first been to Blyth back in January of 2007 and half a dozen or more times since then.  We have lots of great memories in California.  In the back of my mind I like to think I have actually driven an RV all the way out to California from Bayfield Ontario each winter for the past 13 years. 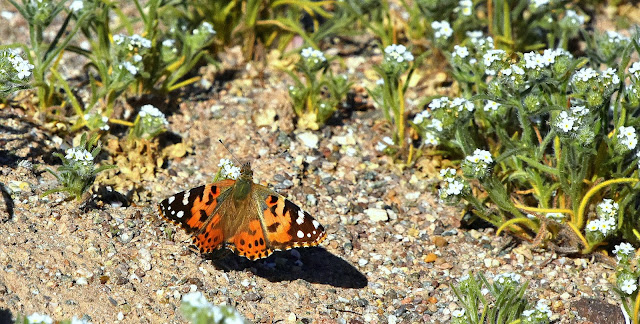 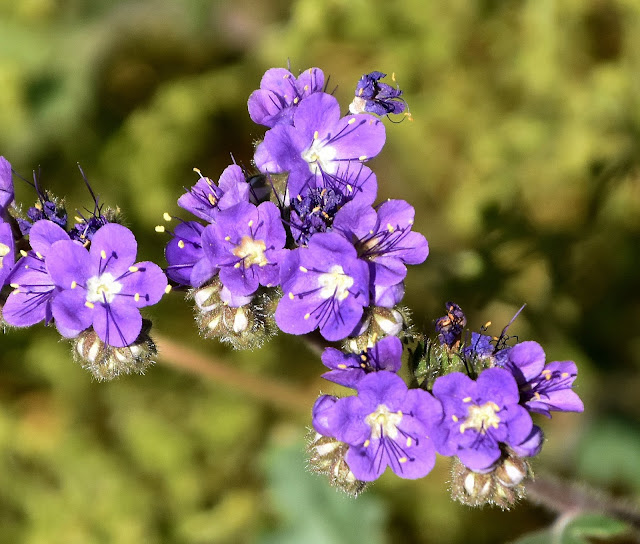 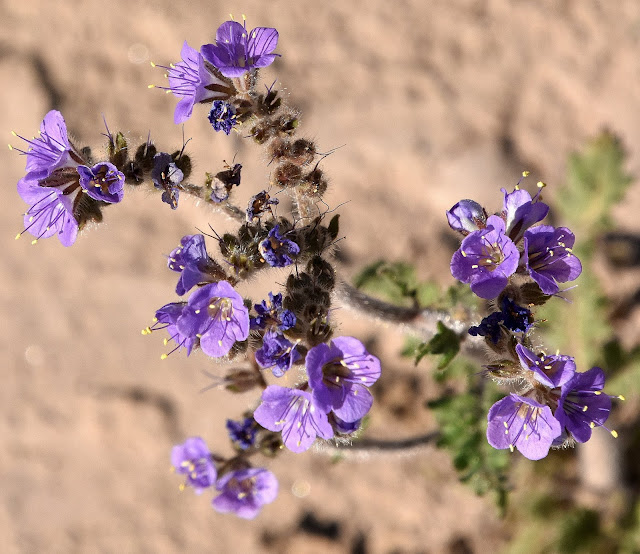 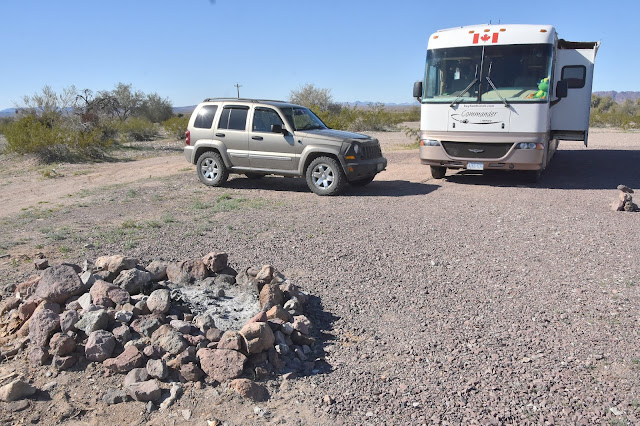 We rattled and rumbled ourselves into an area where we knew boondocking spots to be.  Being the creatures of habit we sometimes are we found ourselves right back in the same spot we had stopped at one time a few years ago somewhere west of the Trigo Mountains and east of the Palo Verde and Chuckwalla Mountain ranges.  And by golly we are under clear blue sunny skies with hardly a cloud anywhere.  With an area temperature drop I think we might have ended up around 58F which of course is perfectly fine for us.  As so often happens after a travel day we just kinda like to veg out and not do to much of anything for a day and that day for us was today.  I could hardly even muster up enough energy for an afternoon walk so just tipped back in my recliner and enjoyed the scenery out the windows with warm sun spilling into the coach through our open side door.  It truly was a whoop-de-doo day.  After writing this paragraph I'll be darned if Pheebs and I didn't get ourselves out for a desert shuffle after all. 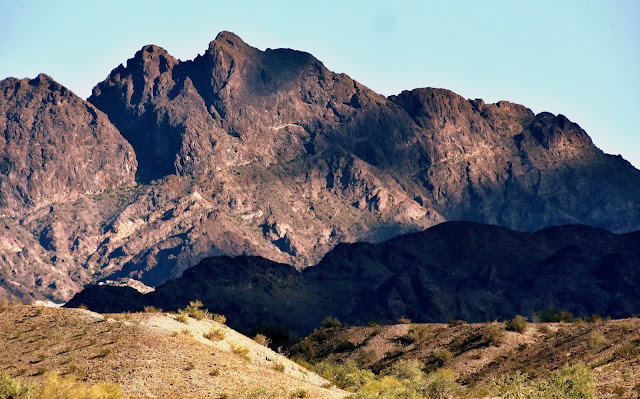 GROANER'S CORNER:((  A blonde decides to learn and try horse back riding assisted without any experience or lessons. She mounts the horse with great effort, and the tall, shiny horse springs into motion. It gallops along at a steady and rhythmic pace, but the blonde begins to slip from the saddle. Out of shear terror, she grabs for the horse's mane but cannot seem to get a firm grip. She tries to throw her arms around the horse's neck, but slides down the side of the horse anyway. The horse gallops along, seemingly oblivious to its slipping rider. Finally, giving up her frail grip, she leaps away from the horse to try and throw herself to safety. Unfortunately, her foot has become entangled in the stirrup. She is now at the mercy of the horse's pounding hooves as her head is struck against the ground again and again. As her head is battered against the ground, she is moments away from unconsciousness or even death when Todd, the Wall-Mart Manager, runs out to turn the horse off.
------------------
“What does a spy do in the rain? He goes undercover.”