A LONG DAY IN PARKER AZ AT CASTRO'S GARAGE

Due to Parker Arizona's big Best In The Desert off road racing event this week-end Parker was not the place to be for folks like us and yet Parker is where we had to be by 9 a.m. this morning.  And the garage we had to go to was right about in the middle of it all.
Rolled out of our Bouse boondocking site shortly before 8 o'clock being careful not to make any unnecessary tight turns,  Traffic on highway 95 was unexpectedly light thank heavens and I didn't spare the horses heading for Parker.  With possibly a leaking power steering problem I figured the sooner I got the rig to Castros Garage the better.  All the way my senses were strained waiting for any unusual sounds or changes in the steering.  Not knowing what to expect today we decided to bring the Jeep too so Kelly and Pheebs followed behind.  What a relief when I finally saw Parker on the horizon and minutes later I had the rig parked near the garage. 'Whewwww'.
Well, how do I describe Castro's Garage right on highway 95 in Parker.  First let me say it is a very typical old small town Mom and Pop Western garage.  Very limited parking and I think about every square inch of the property is filled up with old cars, trucks, and all the parts and pieces that go with them.  They had to move an old Class A to fit us onto the lot.  Tight squeeze but we made it.  Right off the bat I had a feeling we were probably going to be here for awhile.  The mechanic guy we talked to was already on his way out to a service call somewhere but was back in half an hour and quickly diagnosed our problem.

Well I would have saved myself a white knuckle drive this morning if I had known beforehand it was not a power steering problem.  The mechanic fella said we had a leak in one of the hydraulic fluid lines which runs the 4 hydraulic levelling jacks and main slide.  The line was right above the steering damper so hydraulic fluid dripped down on that giving us the impression it was a power steering problem.  Rick the mechanic was able to determine the frayed hydraulic line led to our rear passenger side leveller. 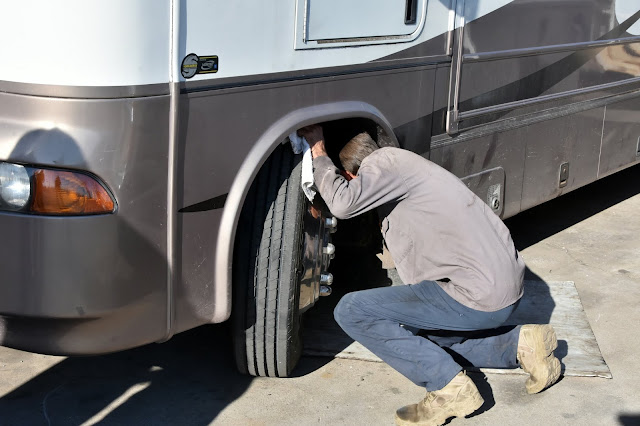 While sitting in the coach waiting for the hydraulic line to be repaired we asked ourselves the question, 'do we want to drive the 26 miles back to Bouse, stay a few more days then drive the 26 miles back through Parker and cross the Colorado river into California??  Or do we want to maybe find us a nice spot along the river somewhere.  In the end we decided to return to our quiet spot near Bouse.
All the time parked at Castros garage alongside busy highway 95 it was a steady stream of 4-lane non stop traffic noise going by. Tons of RV folks here for the big off road event starting Saturday morning.  We knew Parker and surrounding area were going to totally be a traffic nightmare.  Early Saturday morning many streets will be blocked off for the parade of big beasty 4 wheelers heading to the start of the race through the desert.  Apparently folks come from all over the States for this event.  Now if it was a big 'Air Show' I'd definitely be interested in seeing it but a bunch of off-road beasty trucks.....not so much.
So here is what we had repaired today.  The hydraulic line running to the passenger side rear leveller was completely removed and a new and heavier regular truck grade hydraulic line put in.  The owner fella here at Castro's pointed out fires can start from hydraulic leaks when cheaper lines are used and RV manufacturers are known for using the cheapest parts they can get away with.  Anyway, the problem is fixed now and I give Castro's two thumbs up for the hard work under the coach their mechanic Rick had to endure.  The place may look a little scrappy but everyone was friendly and I think the owner Fabian had our best interest and safety in mind and treated us fairly.  They could have put in another cheap braided hydraulic line but he said no, truck grade!!  Our bill came in on the north side of a $400 bill:(( 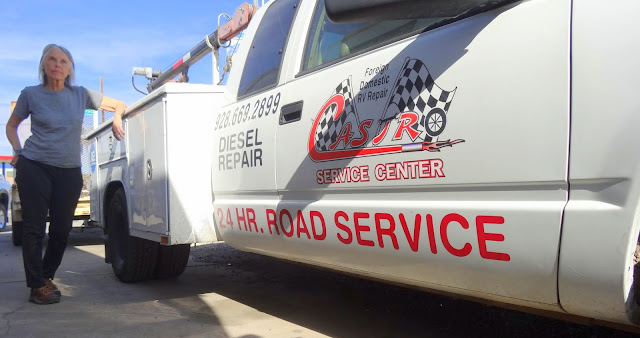 It was about 2:30 when we heard the mechanic putting our front wheel back on.  The hydraulic line installation was finished.  Kelly went in to pay the bill while I and the rig headed for Parker's south end at the Running Man Gas Bar to wait for her.  She had ordered a pizza while the mechanic was finishing up and had to go get it.  Twenty minutes later in the 'BIG' cemented gas bar parking area we chowed down on a 'meat lovers' pizza.  Kelly had also picked up a couple chocolate milk shakes to wash the pizza down.  Been many years since I had last had a milkshake. 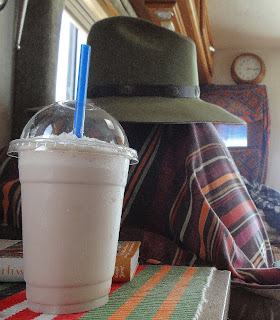 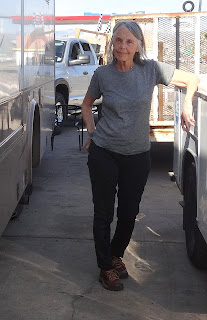 Traffic coming into Parker was heavy and I was sure glad we were rolling the other way.  Pheebs and Kelly were following in the Jeep.  We were back in our scenic Bouse parking spot sometime around 4  A Facebook message from John camped near us said he was pulling out in the morning heading for Alberta.  He was over at Bill's (Wandering Willy) so we hopped into the Jeep and drove the short distance over there and had us chin wag before John headed back to his rig to finish packing up.  Doctor's verdict on Brenda's broken ankle was not the best so a return to the southwest and John was out of the question for her.  With a windy wet weather front rolling in tomorrow we may very well move down the hill Saturday morning and move into John's vacated spot.  Easier for us to keep an eye on wild Bill from there.  And John said he really does need an eye kept on him too:))

- “I lift weights only on Saturday and Sunday because Monday to Friday are weak days.”
- "I've taken a vow of poverty. To annoy me, send money.
------------------------
Years ago when my two girls were small, they were taught how to say their blessing before eating their meal. One night as I was busy scurrying around the kitchen, I told them both to stay their blessings without me. I took a moment to watch them as they both squeezed their eyes tightly shut over folded hands. As my 4-year-old finished, her 3-year-old sister kept on praying.  Another minute or two passed before she lifted her head, looked at her plate, and in an indignant voice said, Hey!!!! the peas are still here!!
================================