LOOKING FOR THE 'CRAZY LADY'S PLACE AND ROSWELL YOU DON'T GOT NUTHIN ON WHAT WE FOUND TODAY:))

Our full Moon Saturday night remained partially obscured by a high cloud cover.  I did slip outside to have a look at it a few times but with the cloud cover it wasn't the best.  Maybe next time.  At no time did the Moon appear reddish.  And it was still a faint cloud shrouded Moon setting over the mountains to our west when we got up this morning. 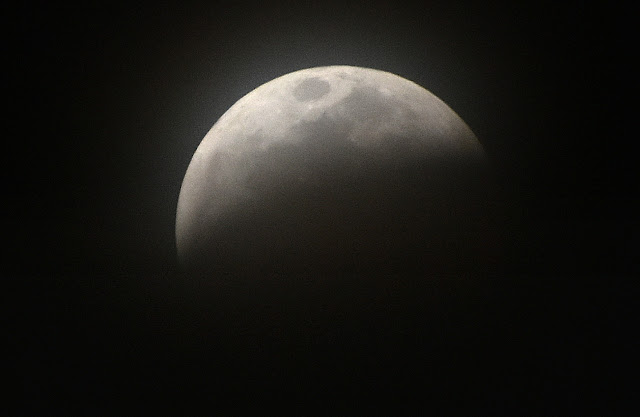 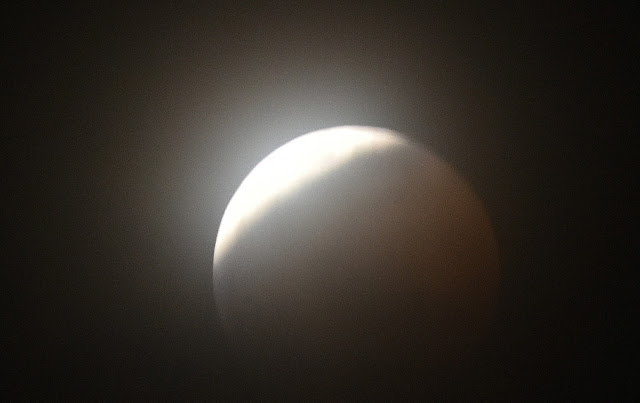 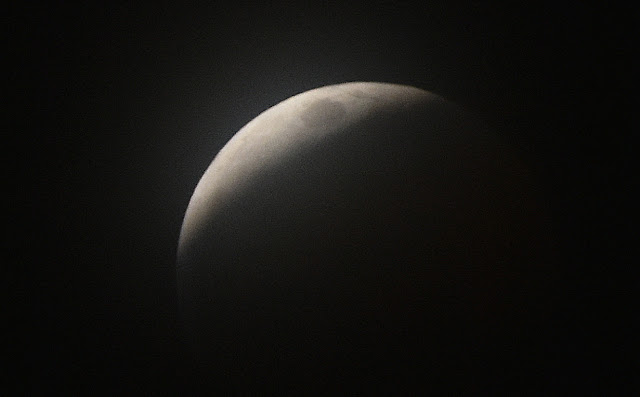 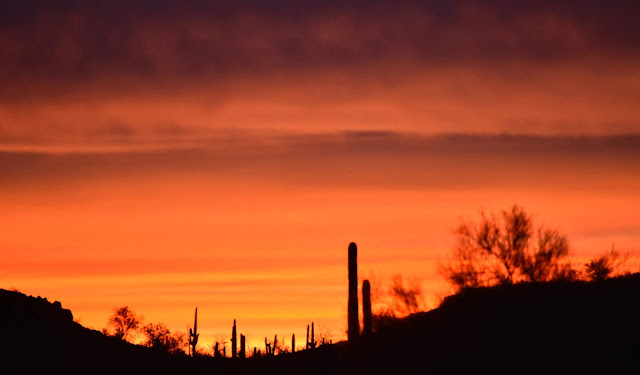 Cloudy and slightly cool morning walk but no wind so it was nice at 57F.  Back home in Bayfield Ontario it was 5F under stormy dark overcast skies.  If still there we would have been stuck inside the house on another very depressing cold and bleak January day. 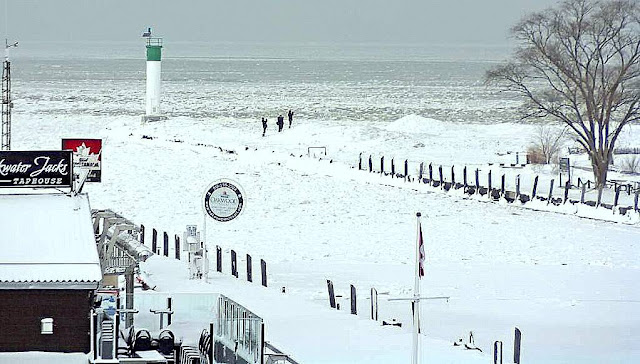 I think if we can't make it back to the Southwest next winter it will not be a good time for us:(( 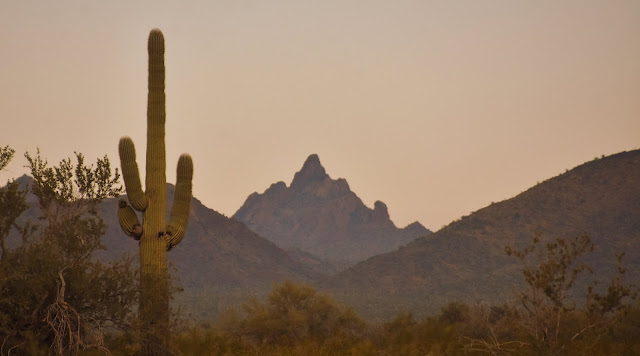 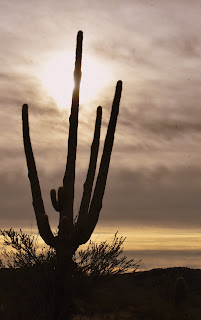 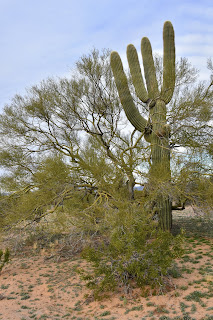 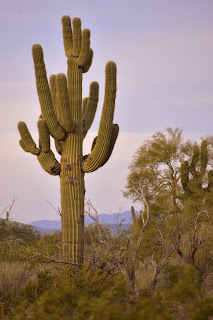 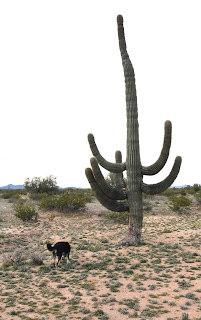 Over the years we have come across a few desert mysteries along the way and mysteries are something we enjoy.  So it was today after reading a comment in my Sunday post by RVing friends Ann & Bill who you might recall dropped by to say hello last week.  Here in part is what Ann wrote, 'turn right and head to the corner post in your picture towards a large Ironwood Tree on the edge of the wash.  Rumor has it that a "crazy" lady and her child lived out there for two years.  There is a bit of rock work and a bar b que pit located there.....Well, under clear blue skies and a brisk desert wind we did have an enjoyable hour this afternoon looking for what's left of that 'crazy ladies' place but we didn't find it.  However we did find a few other curious things that of course begs some questions about where they came from way out there in the desert.

Been over 3 weeks now since we've snapped on a television.  We have 2 of them here but we never use them.  I sure don't miss slugging our Shaw satellite dish around and setting it up etc.  And of course we sure don't miss making the payments every month for Shaw TV or the aggravation of having to deal with yet another Tech company.  Sometimes simpler is better and for us TV is just one of those unnecessary things while traveling.  We've never been You-Tubers either.  We have our lap-tops and we read.  Must say our new Verizon plan is working out really well.  Sixty five dollars a month for unlimited internet.  Yes we have found a few areas a bit slow going at times but overall we are satisfied with the coverage.


For the past few days I have been using the 'Blogger' format for doing my posts and what a frustratingly aggravating experience that has been once again.  Had I not used 'Open Writer' for years I would have nothing to compare Blogger to and might think it Okay.  I'm sure Google could easily improve and update their 'square wheeled' Blogger program on the smooth Techno highway but they have chosen not to do so.  Kelly has been looking into 'Word Press' and it may or may not be an option for me.  The key to my blogging all these years has been the enjoyment and ease with which I am able to put my daily posts together.  I'm not much of a patient person anymore and frustration easily overwhelms me at times so this whole Live Writer, Blogger, and Picasa thing has really been a test of my tolerance these past few days!! 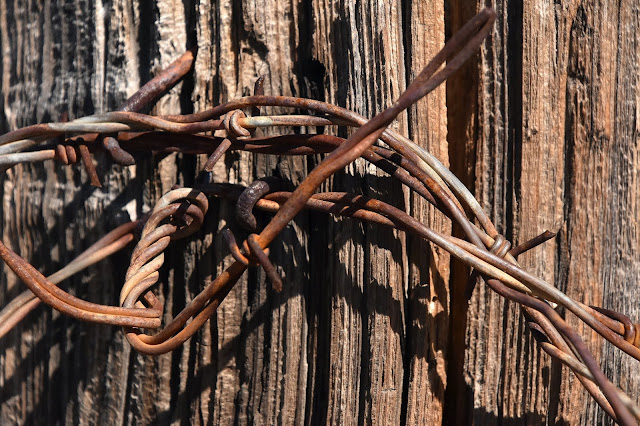 A few days ago we met a couple blog readers in Ajo.  Like many people I am really poor at remembering names.  One of the last things I asked this couple were their names which they told me, Scott and Dianne.  I turned to Kelly to make sure she heard their names and she did.  No worries now for me remembering.  Five minutes later driving away I turned to  Kelly and said, I think that fella's name is Kevin.  Kelly thought for a few seconds and said no, Gary.  A few miles down the road I said, maybe it's Larry and Kelly said no I think it was Bruce.  Well, I stuck with my Kevin name and that went into my Saturday night post.  Sunday morning we received a nice email from Scott and Dianne:)) Who the heck ever said two heads are better than one:(( 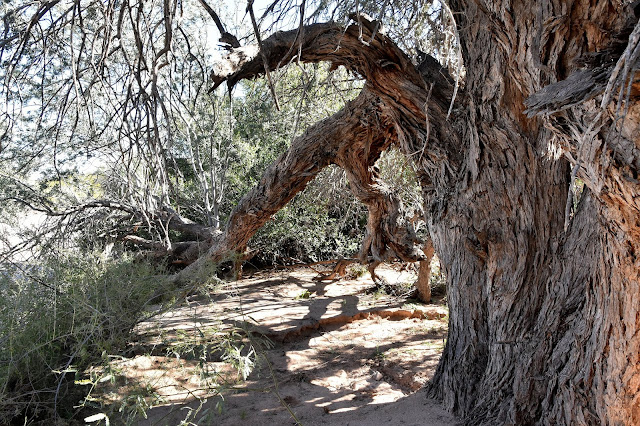 On my Saturday post PatrickA51 asks, "where did you get your hat"?  Until recently I thought I bought it in Tombstone Arizona but recently remembered I actually bought it in Sierra Vista at a store in the Fry's Plaza.  Later that day we  went to Tombstone where Kelly bought her hat.  The brand name of my hat is the 'Tombstone' and I guess that is where I had myself all confused.  My new 'Tombstone' hat didn't look quite the same as you see it now.  The sides were tipped up like wings.  I re-shaped the sides to a more flatter look plus bent the back part down more as well.  To me it looks more like a legendary Tombstone hat now.  I feel totally comfortable wearing the hat out here in the great Southwest but back home that big cowboy hat sticks out like a huge sore thumb in a sea of generic baseball caps.

GROANER'S CORNER:(( There are four wheels and eight men on a fire engine.  Four and eight makes 12.There are 12 inches in a ruler.  Queen Elizabeth is a ruler.  The Queen Elizabeth was a ship.  Ships sail in the sea.  The sea has fish.  Fish have fins.  The Finns are always fighting the Russians.  Russians are known as "red".  Fire engines are always rushin', and that's why they're red.
-----------------
"My uncle ran for Senate last year." "Really? What does he do now?" "Nothing. He got elected."

Helium was up, feathers were down.
Paper was stationary.
Fluorescent tubing was dimmed in light trading.
Knives were up sharply.
Cows steered into a bull market.
Pencils lost a few points.
Hiking equipment was trailing.
Elevators rose, while escalators continued their slow decline.
Weights were up in heavy trading.
Light switches were off.
Mining equipment hit rock bottom.
Diapers remained unchanged.
Shipping lines stayed at an even keel.
The market for raisins dried up.
Coca Cola fizzled.
Caterpillar stock inched up a bit.
Sun peaked at midday.
Balloon prices were inflated.
Scott Tissue touched a new bottom.
And batteries exploded in an attempt to recharge the market
=====================
Posted by Al Bossence at 1/21/2019