AUBURN INDIANA TO TERRE HAUTE INDIANA: WE DIDN’T LET INDIANAPOLIS CHEW US UP AND SPIT US OUT AGAIN 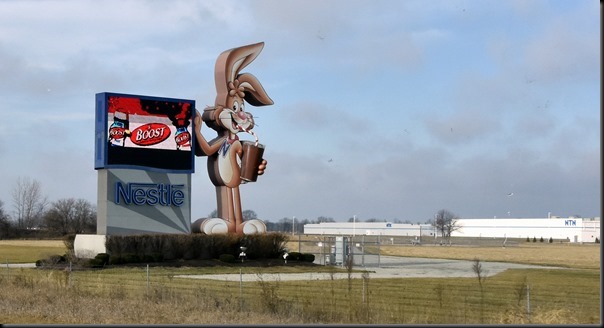 Aw yes, the wonderful side of RV traveling, how soon I had forgot.  Up at 2:30 a.m. rudely awakened by the flapping sounds of our living room slide cover .  Obviously the previously northwest wind had shifted in the night.  Had no choice but to get up, stumble around and press the right buttons to engage a strong electric motor to pull the heavy slide back into the coach.  Did that mean I could go right back to sleep again?  Of course not and I laid awake until after 4 finally reading for awhile to knock myself out.  Aw yes, the wonderful side of RV travels. 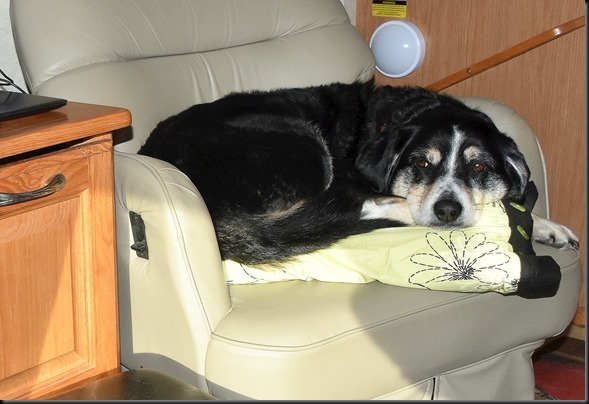 JUST TRAVELLING DOWN THE ROAD WITH MOM AND DAD

A biting cold morning but how nice to see clear blue skies as we pulled out of Auburn’s Cracker Barrel climbing aboard I-69 south at 8:35 a.m.  Sunshine, bare roads and no wind.  We had us our second good driving day. 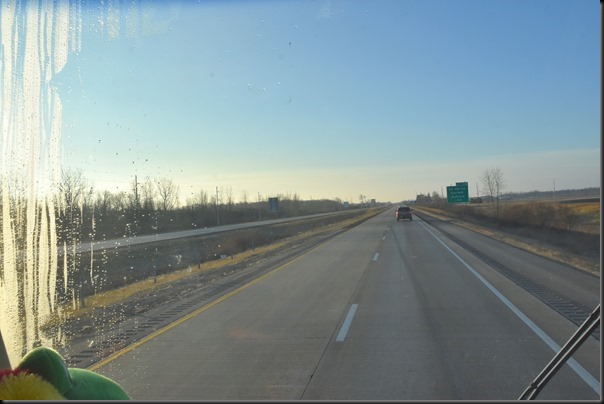 WHAT A LIFT TO SEE CLEAR BLUE SKIES AGAIN

Indianapolis has chewed us up and spit us out a few times over the years but I was determined this year it was going to be the Bayfield Bunch who was going to do the chewin and spittin.  Our GPS Garmin Gertie gave us a bum steer last year going through Indy so this time I checked Google Maps before hand, turned Garmin Gertie off and led the charge myself.  It was our easiest transit through Indianapolis of ever which of course also had much to do with it being 11:45 on a Sunday morning.  We took the western 465 by-pass route and didn’t have any trouble. 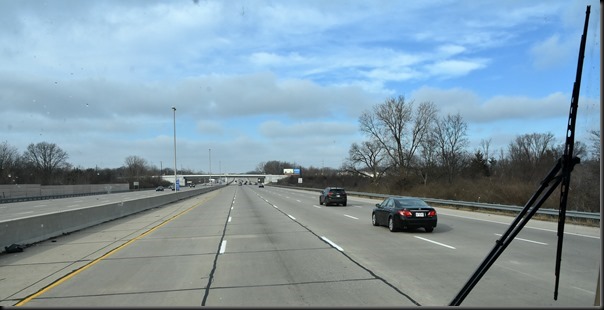 THIS ONE PHOTO IS TYPICAL OF INDY’S  TRAFFIC THIS MORNING 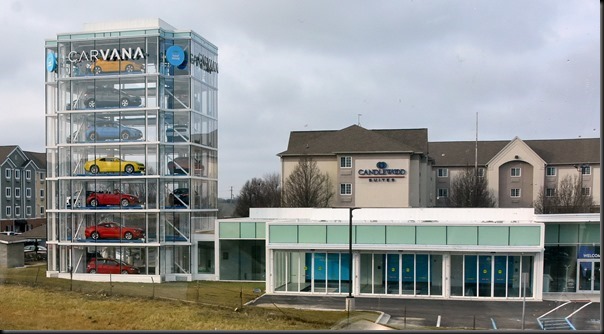 West of Indy on I-70 we pulled into the first Rest Area we came to and shut it down for a break.  Kelly made us up some great egg salad sandwiches and brewed up a couple coffees.  Although the weather was not what one would call warm yet it was sure a heck of a lot better than first thing this morning in Auburn. 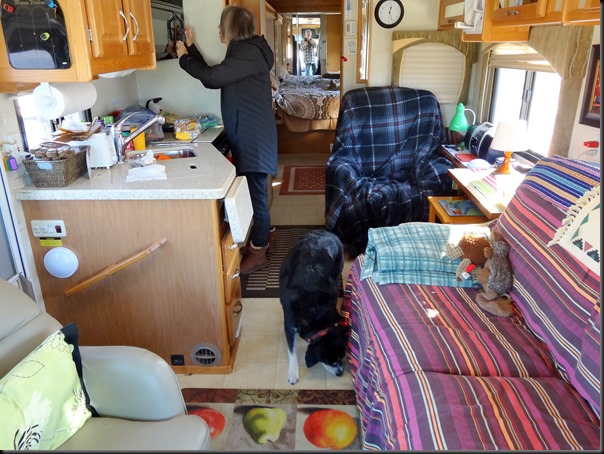 REST AREA STOP FOR A SANDWICH AND COFFEE

Back on I-70 we plodded steadily on in a southwesterly direction under a mixture of sun and cloud.  With neither one of us feeling like pulling one of our marathon driving days of old we decided to pack it in shortly after 2 p.m.  In Terre Haute Indiana we found a nice spacious parking lot at a Super Walmart.  I slipped in for a few groceries while Kelly laid down for her daily afternoon rest.  Motorhome is running well, the Bayfield Bunch is doing fine and we are still feeling half civilized. 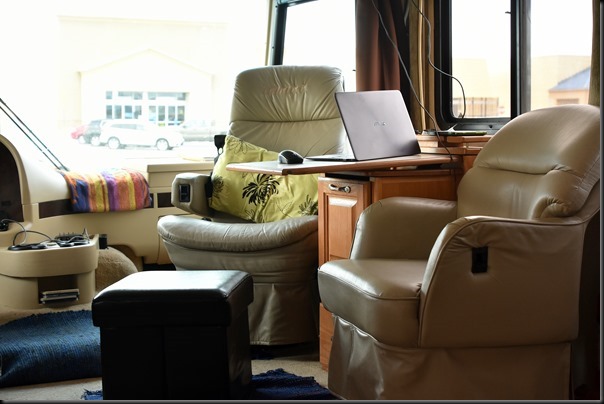 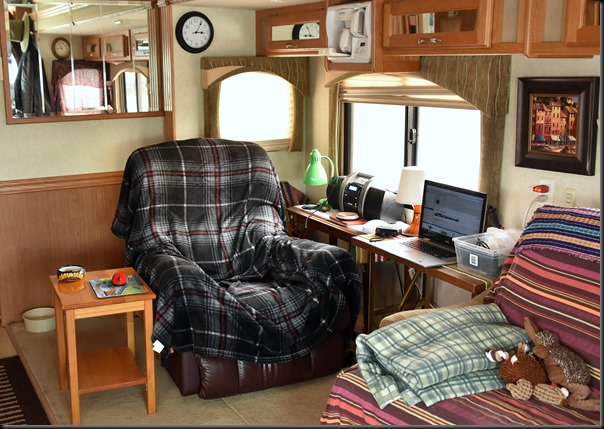 Every winter we have left for the southwest I have always been amazed at how fast we adapt to our part time Snow Bird RV lifestyle.  The hardest part of course comes before we even leave.  One gets very softly accustomed to all the comfy cozy perks of a nice laid back sticks and bricks house and both Kelly and I find it harder each year to leave that secure comfort of home for a number of months to live in a rectangular box on wheels.  Easier I think for full-timers because they don’t make that twice yearly switch from one lifestyle to the other.  Both Kelly and i had to really work hard at prying ourselves out of the house this year.  However, neither one of us and especially me could stand the thoughts of spending 3 more long months of continuing gray, bleak, and boring days trapped in the house by winter’s freezing cold.  If you have never gone south for the winter, don’t go because if you do you will spoil yourself forever.   Well, at least that is what has happened to me and I knew years ago that it would indeed happen that way someday.  This is our 13th Snow Bird year……………… 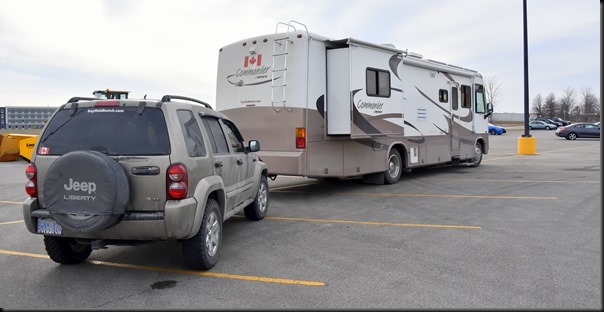 By the way……the singer and keyboard player (and quite possibly the songwriter and arranger) in this video is my exceptionally talented son, Sean:))  Holding Nothing Back

You might be a redneck if... On stag night, you take a real deer.

Your back porch is bigger than your house.

There is more oil on your cap than in your car.

You think a hot tub is a stolen bathroom fixture.

A full-grown ostrich has fewer feathers than your cowboy hat.

An expired license plate means another decoration for your living room wall.

You think Old Yeller is a movie about your brother's tooth.

You watch Little House on the Prairie for decorating tips.

A spokesperson for the U.S. Mint announced that a new fifty-cent piece was being issued to honor two great American patriots. On one side of the coin would be Teddy Roosevelt and on the other side, Nathan Hale. Asked why two people were going to be on the same coin, the spokesman replied, "Now, when you toss a coin you can simply call.... 'Ted's or Hale's'."