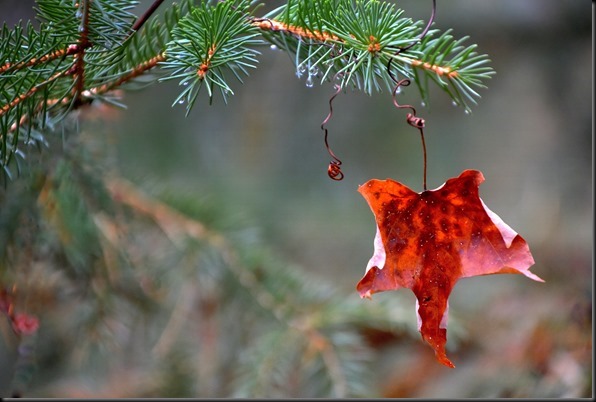 HOW MOTHER NATURE DECORATES HER FORESTS

A week or so ago I took a photo of something on Pavillion Beach which Kelly saw and said to me later, ‘why didn’t you pick that up and bring it home’??  She was right of course so why the heck didn’t I pick it up and bring it home for our outside garden?  With area snows rapidly melting Pheebs and I went back to Pavillion Beach this morning to get it but I hadn’t counted on the beach still being under a couple feet of ice and snow built up by Lake Huron’s waves.  Needless to say we didn’t find what we were looking for but we did pick up a couple additional pieces of driftwood while there.  Maybe we’ll have us another look sometime in April when all the lakeside ice and snow is finally gone. 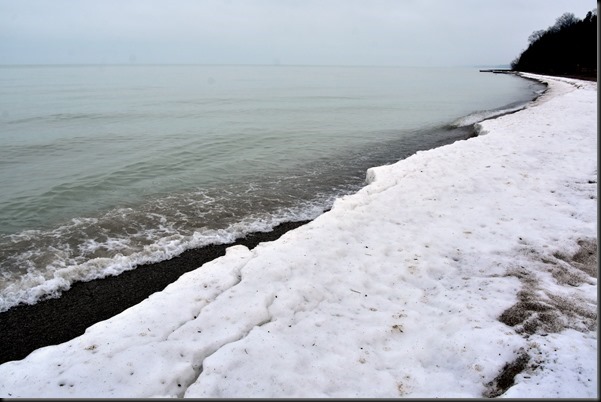 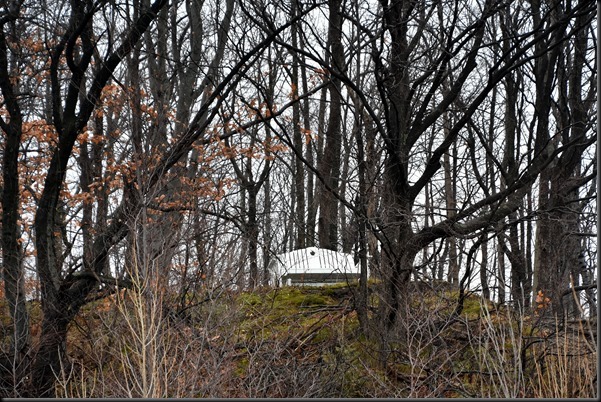 A LONE BENCH SITS ATOP THE BLUFFS OVERLOOKING LAKE HURON 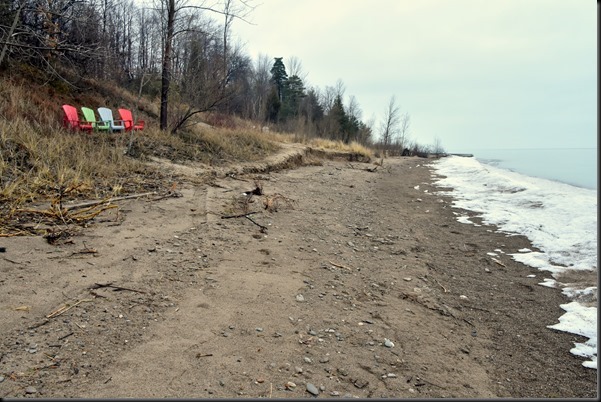 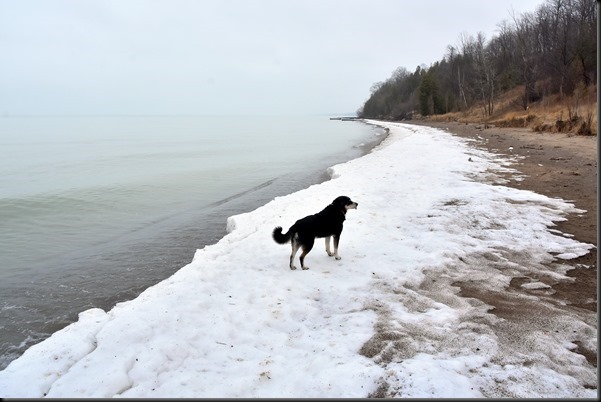 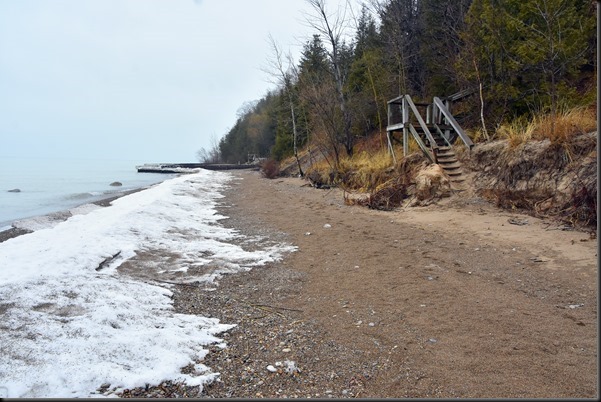 Country roads were too soupy this morning so Pheebs and I kept Libby on pavement.  After Pavillion Beach we wandered down around to and through the little Hamlet of Zurich before heading back on home again.  Gray skies all the way and not a hint of forecasted sunshine. 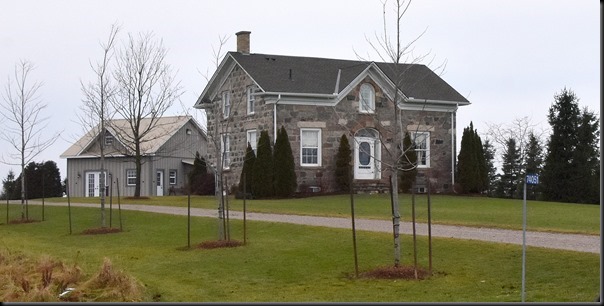 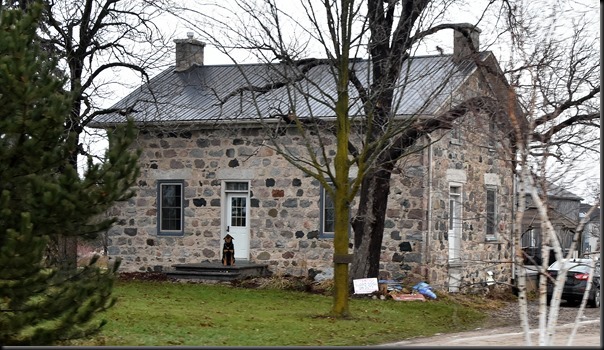 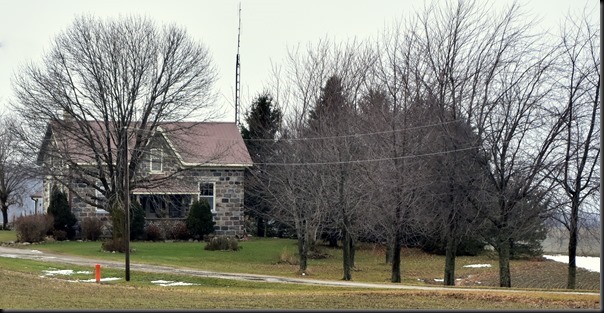 Now that most of our snow has melted and it's actually possible to walk again Pheebs and I for the second afternoon in a row took ourselves for another hike around our Park's pine tree trail and beyond.  There are about a hundred acres here with much of it in forest.  Usually we stick to the trails but once and awhile venture off into some of the darker places where the deer and coyotes hang out.  Years ago I used to hike through these areas but not so much anymore.  Rarely see any deer and have never seen a Coyote but we know they are there because we sure can hear them yipping at night sometimes.  Been walking these trails and woods for over 16 years now. 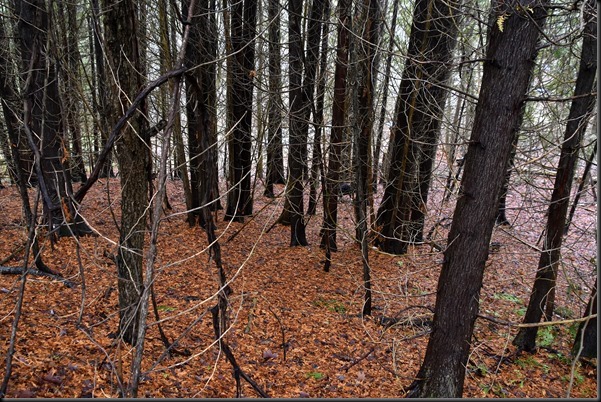 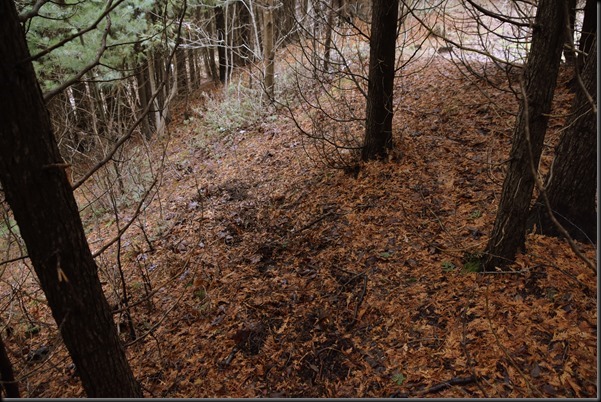 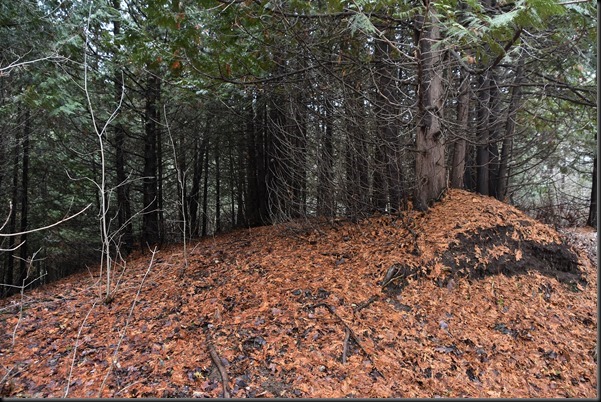 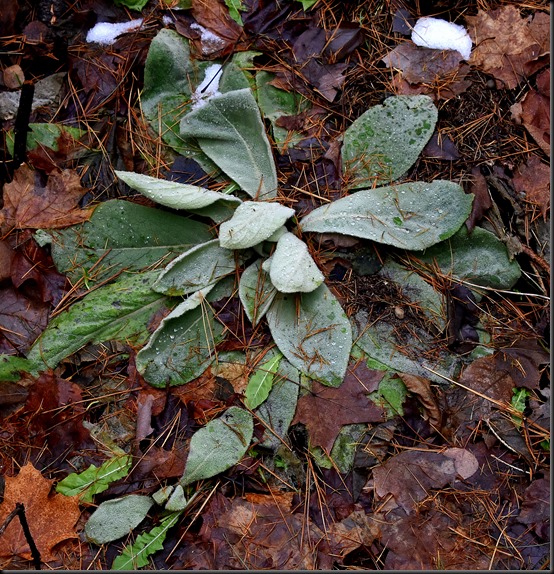 SEEING A LOT OF ‘LAMBS EAR’ PLANTS IN THE FOREST 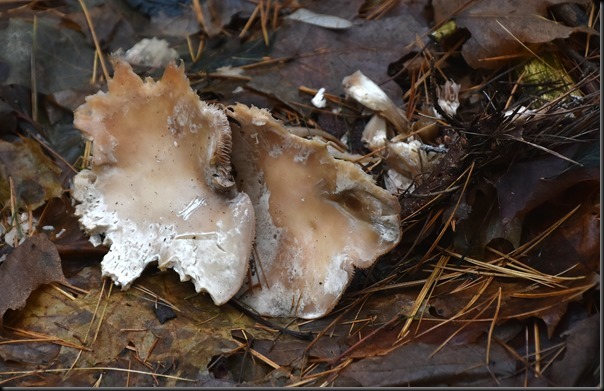 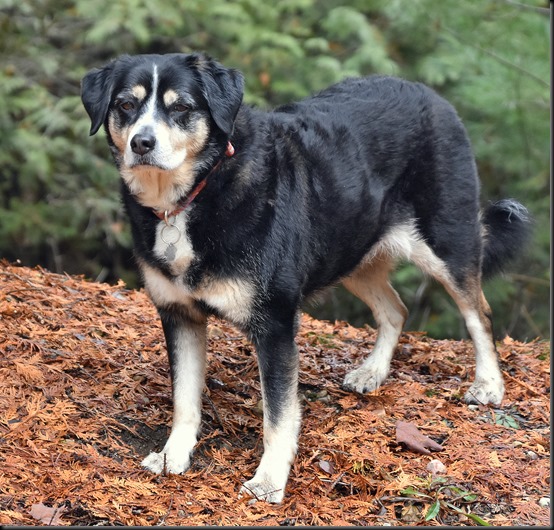 Starting to keep an eye on the long range weather forecast for the end of the month.  Am hoping for a warm clearing trend but so far it isn’t looking that way.  With any luck we may get away two weeks from today hopefully. 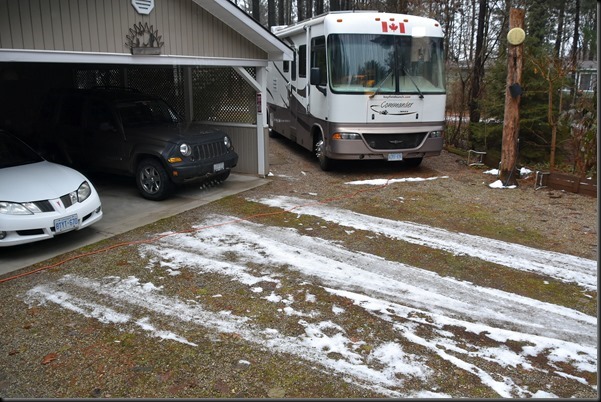 SOOOOO GLAD TO SEE ALL THAT ICE AND SNOW MELTING AWAY 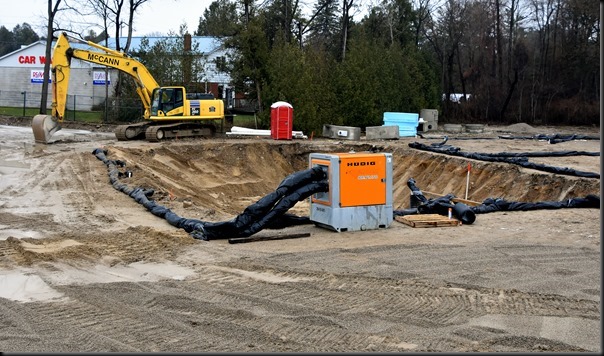 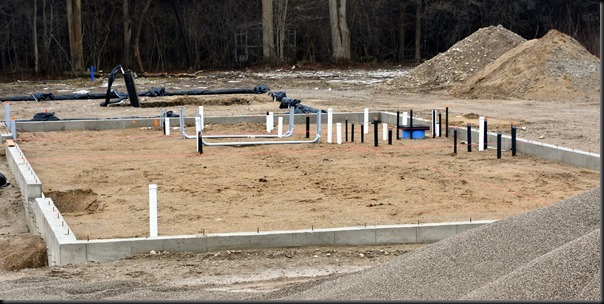 Although sunshine and slightly warmer temperatures were called for today we neither felt nor saw any of either one.  Spent the day once again under cold gray skies.  At least it wasn’t raining or snowing and for this time of year that is a definite plus. 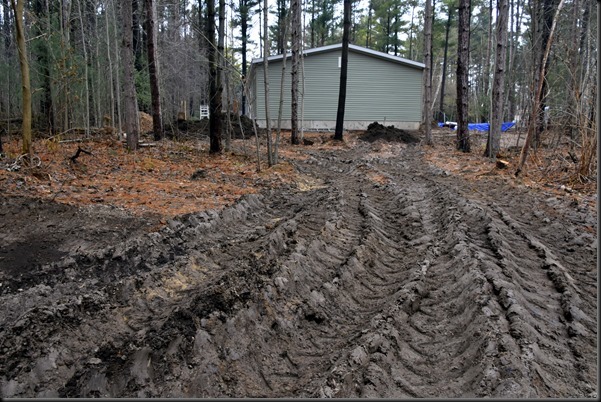 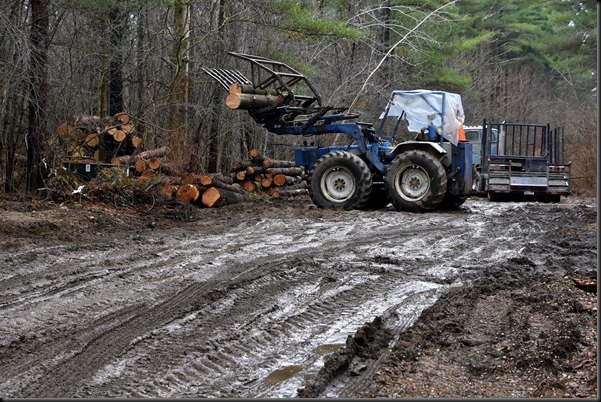 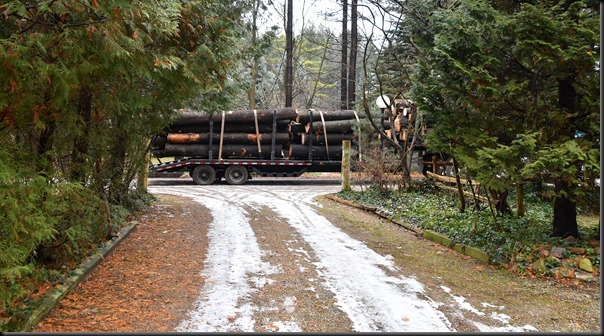 ANOTHER BIG LOAD  OF PINE LOGS ROLL BY OUR DRIVEWAY 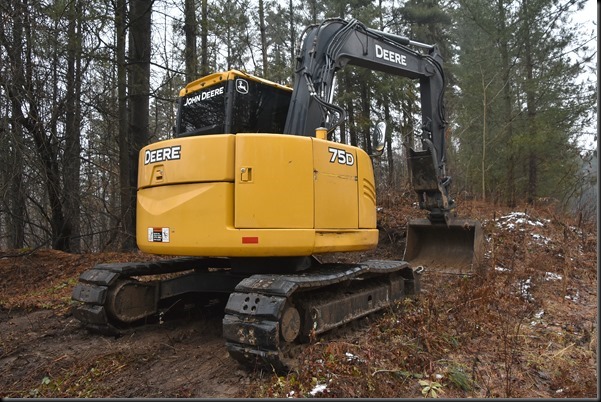 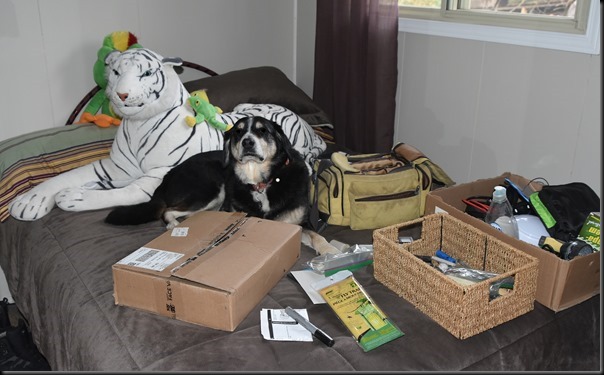 PHEEBS HELPS ME SORT OUT WHICH RV STUFF TO RELOAD BACK INTO THE MOTORHOME….THAT’S MY BED BY THE WAY AND WOULD YOU BELIEVE I HAVEN’T SLEPT IN IT FOR OVER 3 YEARS…..OH, AND THAT’S SPENCER AND FROGGY BEHIND PHEEBS 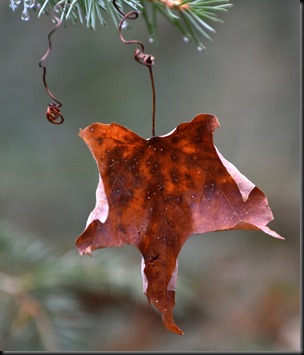 GROANER’S CORNER:((  Santa Claus is a woman because::

Q: Why weren’t there any nativity scenes in Washington D.C.?
A: They couldn’t find three wise men.

- Mason says to his mother: You can delete the train set from my Christmas wish list. Mother: Why is that? Mason: Yesterday, I found one in the closet.

- Husband: "What do you want for Christmas?" Wife: "A divorce!" Husband: "Can you think of anything cheaper?"

- As a little girl climbed onto Santa's lap, Santa asked the usual, "And what would you like for Christmas?" The child stared at him open mouthed and horrified for a minute, then gasped, "Didn't you get my E-mail?"

10. Use slices to balance that wobbly kitchen table.

9. Use instead of sand bags during El Nino.

7. Use as railroad ties.

6. Use as speed bumps to foil the neighborhood drag racers.

5. Collect ten and use them as bowling pins.

4. Use instead of cement shoes.

3. Save for next summer's garage sale.

2. Use slices in next skeet-shooting competition. 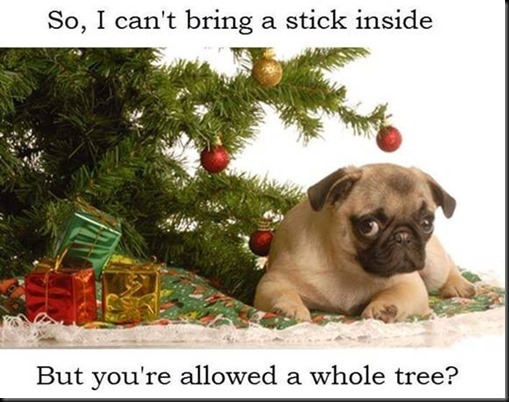