PHEEBS AND I TOOK THE BIG E FOR A CRUISE 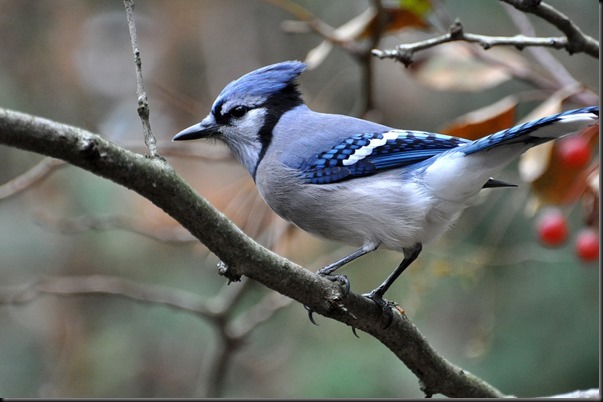 Weather experts are saying they have it on good authority that November 20th is going to mark a significant weather change here in our neck of the woods.  They say our below normal November weather will be no more and things will warm up and remain that way for the winter.  Now I don't know how credible their 'good authority' source is but I'm going to think positive, don my shorts on the eve of the 19th, get my lawn chair out and go sit in the driveway awaiting the big change on the 20th.

FISHERMEN ON BAYFIELD’S PIER THIS MORNING AND CHECK THE GUY ON THE EXTREME RIGHT WHO IS CASTING….I’M WONDERING IF THAT WHITE DOT FAR ABOVE HIM IS THE BOBBIN ON HIS LINE??

THIS IS WHAT IT LOOKED LIKE A WEEK OR SO AGO

Another short Jeep snort for Pheebs and I but we did manage to pick us up a load of corn.  With our areas corn harvest underway it is not unusual to find corn spills alongside the road when corn is being transferred from combines to waiting trailers parked on the road.  Inevitably some of that corn in the form of kernels is spilled.  Had a couple shopping bags in the Jeep so I filled them up.  Decided awhile back if I can't keep the Squirrels in our front yard away from the bird feeders I had better come up with a plan.  My theory is this, if I can fatten the little buzzards up on corn maybe they will leave our bird feeders alone.  Ya right, as if that’s gonna work eh. 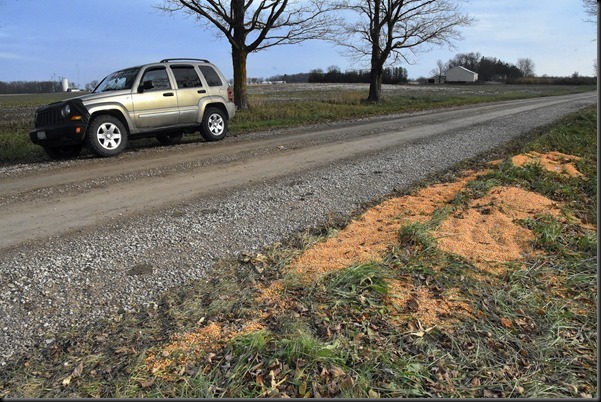 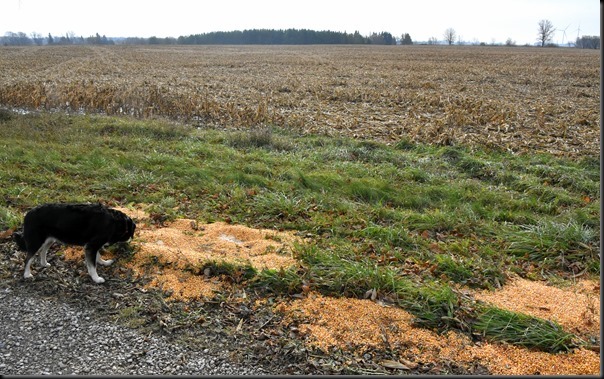 I ALWAYS HAVE LOTS OF HELP

GEEEEZZZZZ, AND I THOUGHT MY JEEP’S FLAT TIRE WAS A PROBLEM A COUPLE WEEKS AGO….GUESS IT JUST GOES TO SHOW THAT NO MATTER HOW BIG YOU THINK YOUR PROBLEM IS, SOMEBODY’S ALWAYS GOT A BIGGER ONE

Been waiting for a rainless day with clean dry roads in order to get the Motorhome out for a run to pick up some gas and propane.  Looks like the Big E will be sitting here all winter so I wanted enough gas and propane in it to carry it through the winter months.  In the past when our Park has lost power (which it always does) for any length of time we simply fired up the Motorhome and stayed there until power has been restored.  Plus it's good to run the engine up every couple weeks or so.  Maybe take it for a run from time to time if roads are dry and free of ice, snow, and corrosive road salt. 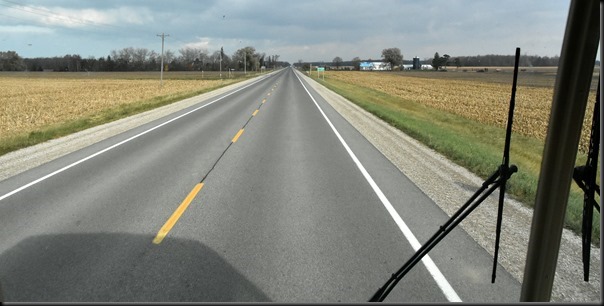 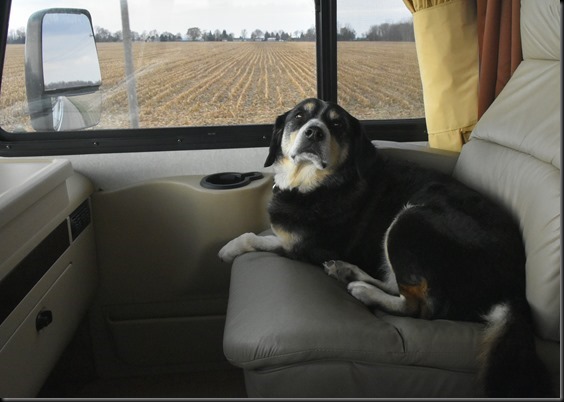 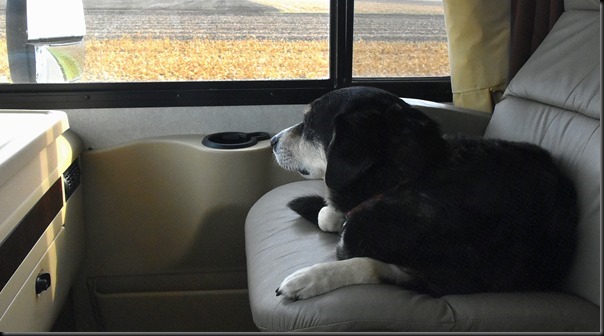 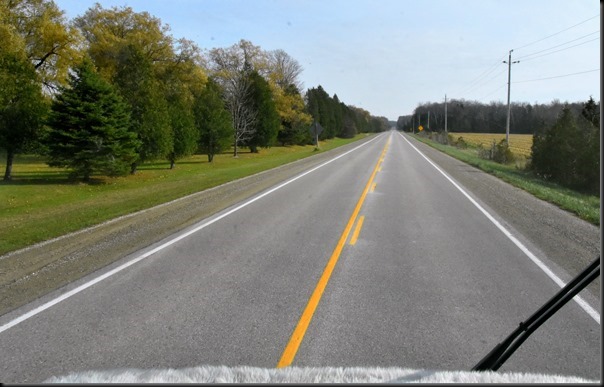 HEADING BACK HOME WE RAN INTO ANOTHER BRIEF PATCH OF SUNLIGHT 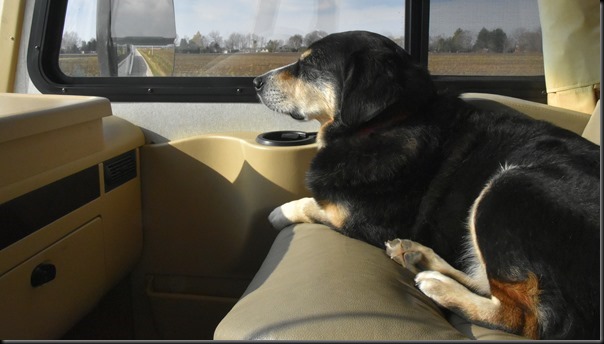 SHE LOVES THE FEEL OF WARM SUNSHINE ON HER HOSE 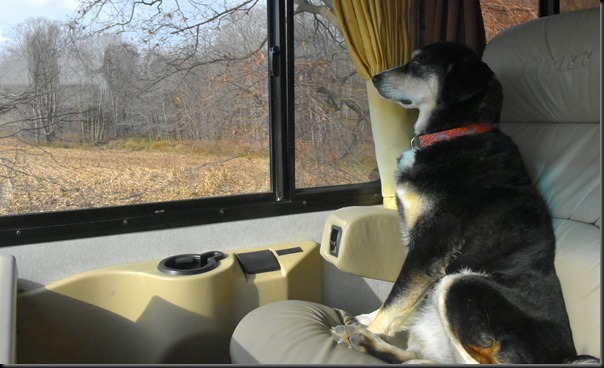 Here’s a thought that rumbled through my head this morning while we ambled along through the countryside……‘Had I been a confident kid with a great memory, a fortunate stretch of good luck plus a healthy dose of extra smarts leading to a decent education I might have followed myself a path to becoming a photo journalist.  Then again, without any of the above I just might have ended up right where I am.  Well that's Okay, had I gone off in the other direction I might have never met Kelly, Pheebs, Max, Checkers, and little Cora. (Motormouse) 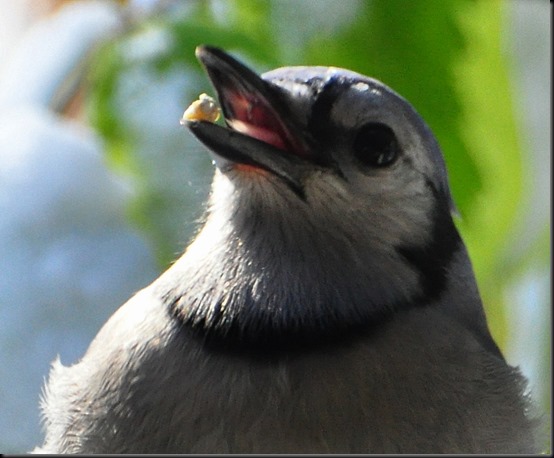 GROANER'S CORNER:((   Many years ago, a beloved Pope died and went to heaven. Saint Peter greeted him in a firm embrace. "Welcome your holiness, your dedication and unselfishness in serving your fellow man during your life has earned you great stature in heaven. You may pass through the gates without delay and are granted free access to all parts of heaven."St. Peter continued: "You are also granted an open-door policy and may, at your own discretion, meet with any heavenly leader including the Father, without prior appointment. Is there anything which your holiness desires?""Well, yes," the Pope replied. "I have often pondered some of the mysteries which have puzzled and confounded theologians through the ages. Are there perhaps any transcripts which recorded the actual conversations between God and the prophets of old? I would love to see what was actually said, without the dimming of memories over time."St. Peter immediately ushered the Pope to the heavenly library and explained how to retrieve the various documents. The Pope was thrilled and settled down to review the history of humanity's relationship with God.Two years later, a scream of anguish pierced the quiet of the library. Immediately several of the saints and angels came running. They found the Pope pointing to a single word on a parchment, repeating over and over: "There's an 'R'. There's an 'R.' There's an 'R'... It's CELIBRATE, not celibate!"

- When the going gets tough, the smart get sneaky.
- When you don't have an education, you've got to use your brains.

A young man asked an old rich man how he made his money.The old guy fingered his worsted wool vest and said, "Well, son, it was 1932. The depth of the Great Depression. I was down to my last nickel."  "I invested that nickel in an apple. I spent the entire day polishing the apple and, at the end of the day, I sold the apple for ten cents."  "The next morning, I invested those ten cents in two apples. I spent the entire day polishing them and sold them at 5:00 pm for 20 cents. I continued this system for a month, by the end of which I'd accumulated a fortune of $1.37."  "Then my wife's father died and left us two million dollars."