A CLOUDY RAIN DRIZZLED MORNING, MUDDY ROADS, AND CORN KERNELS IN A BLANKET 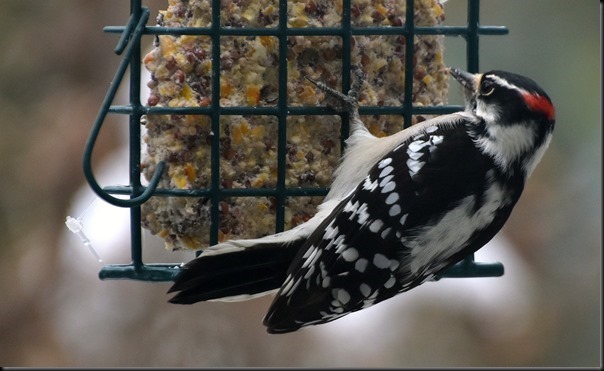 As expected we woke up to a heavy cloud cover under rainy skies.  Temps were in the high 30’s but a stiff wind made it feel cold and damp.  Nonetheless Pheebs and I ventured out anyway and noticed right away a lot of our snow had already melted.

SPOTTED THIS BIG CONTRAPTION AT THE END OF A FARM LANE….NOW I KNOW IT WASN’T USED IN THE HEN HOUSE FOR GATHERING EGGS OR IN  A BARN FOR MILKING COWS BUT I’M WONDERING IF IT’S  MAYBE USED FOR SHEEP SHEARING:)) 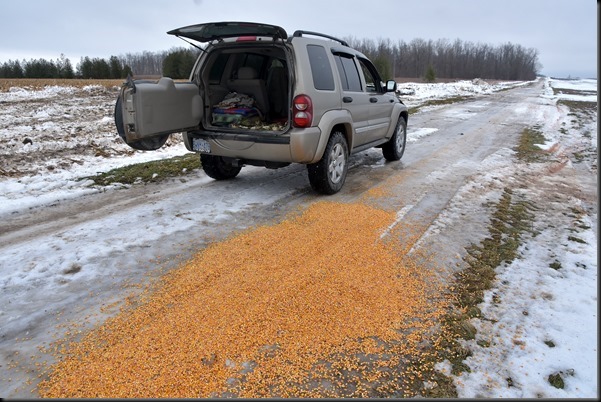 WE CAME UPON A FAIR SIZE CORN SPILL SO WITHOUT ANY CONTAINERS ABOARD I LAID OUT A BLANKET, SCOOPED A BUNCH OF CORN KERNELS INTO IT, AND PUT IT IN THE JEEP…YES WE DO LOOK AFTER OUR SQUIRRELS HERE AT HOME 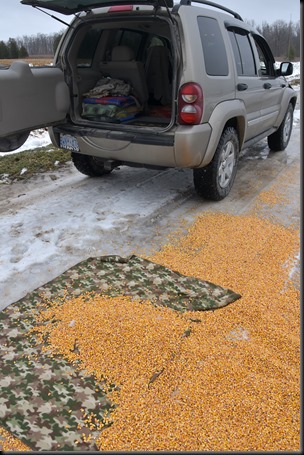 Frozen country roads were in the process of turning into a muddy soup but we didn’t let that deter us and plowed through the goop for a couple hours.  Jeeps a mess but at least it’s just good old dirty mud and not corrosive road salt.  They don’t salt country roads like they do highways so I have a tendency to take country roads even in the wintertime.  Absolutely hate the way they over-salt roads around here.

BACKROADS WERE A COMBINATION OF ICE, SNOW, AND MUD THIS MORNING 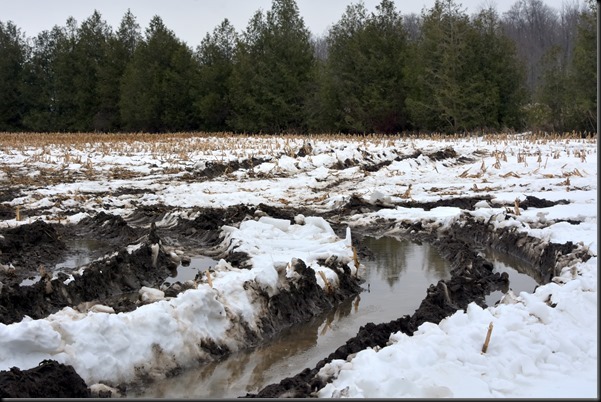 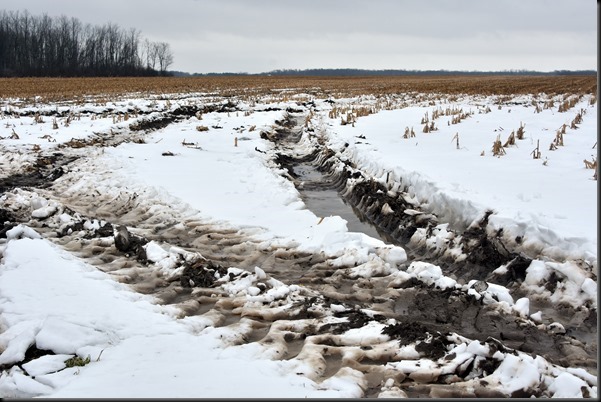 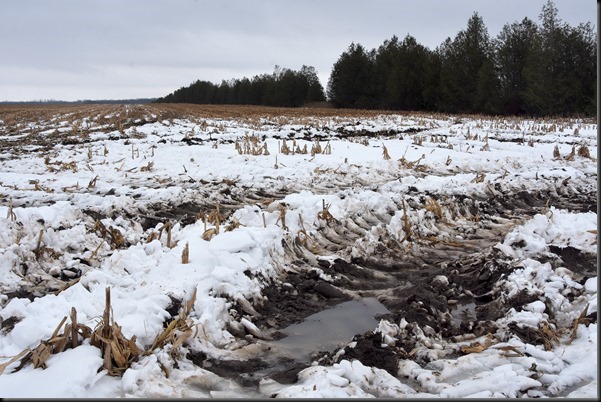 COULD THIS BE A 6’ DEEP WHEEL WASHER COMING UP:))

It was a challenge finding any photos in the morning’s drabness but we went looking anyway.  I just enjoy driving along slowly keeping an eye out for anything out of the ordinary.  And I’m also watching for UFO’s and patiently waiting for one of those big things to land on the road in front of me so I can snap a few pics.  I have a far greater belief in Alien life than I do for many other popularly held mythology beliefs. (Mythology…a collection of myths, especially one belonging to a particular religious or cultural tradition) 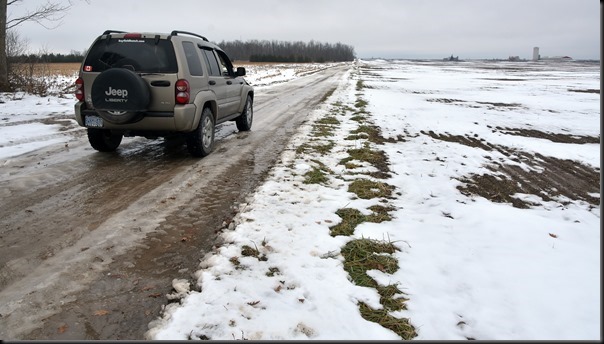 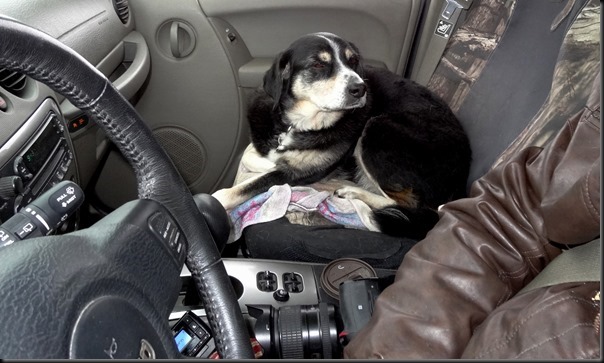 MY CAMERA ALWAYS RIDES RIGHT BESIDE ME 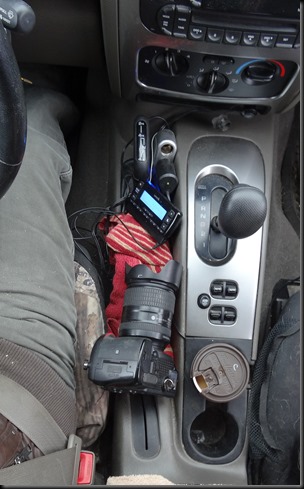 In one of the many factual history related books I have read these past few years I recently and quite unexpectedly stumbled across a chapter in RAF Air Marshal and Mosquito pilot Sir Peter Horsley’s book entitled, 'Sounds From Another Room'.  If you click the link be sure to read the brief description of who this man was and the book he wrote.  The chapter that leaped off the pages for me was a strange meeting he had after the war with a man by the name of ‘Janus’.  Reading the chapter several times this man ‘Janus’ talks of things I have thought about and believed in for years.  Still do and even more so.  To me, Peter Horsley is a credible writer with impeccable credentials that intertwine with British Royalty all the way to Buckingham Palace, the Queen of England and Prince Phillip.  Fact, not fiction or mythology!!  Be sure to read the link about this man and the chapter in his book called, ‘Janus’.  And if possible………read it with an open mind. 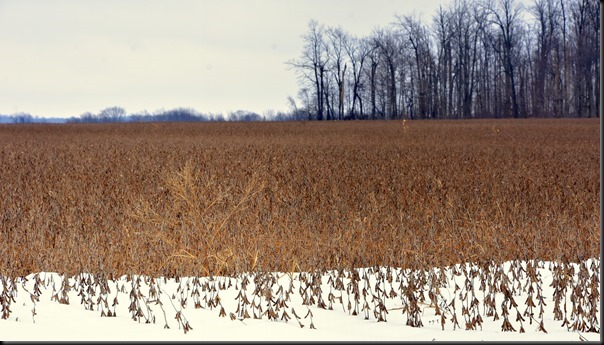 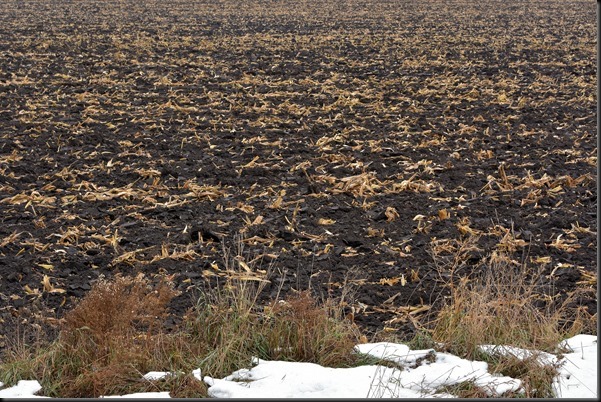 It was a pretty dreary looking gray afternoon and although the drizzly rain had stopped it felt too cold and damp to go outside.  Besides, if the sun isn’t shining why go out at all.  And it’s only November:(((((((((((

YEP THEY ARE DEFINITELY WORKING ON THE TIM HORTON SITE ALRIGHT

I’ve been keeping a rather close eye on our bird station and so far the score still remains at 5-4 for Al:)) 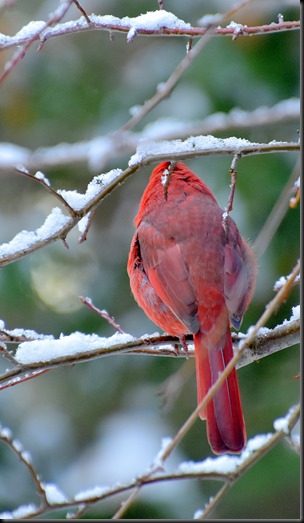 GROANER’S CORNER:((  A local priest and a pastor were fishing on the side of the road. They thoughtfully made a sign saying, "The End is Near! Turn yourself around now before it's too late!" and showed it to each passing car. One driver who drove by didn't appreciate the sign and shouted at them, "Leave us alone, you religious nuts!" All of a sudden they heard a big splash, looked at each other, and the priest said to the pastor, "You think maybe we should have just said 'Bridge Out' instead?"

"It's no use. Art doesn't listen to me," said a little boy who was praying for a new bike."Art who?" asked the boy's mother."Art in heaven," came the reply.