WELL AT LEAST I REMEMBERED HOW TO CHANGE A FLAT TIRE THIS MORNING…..IN THE RAIN!!!! 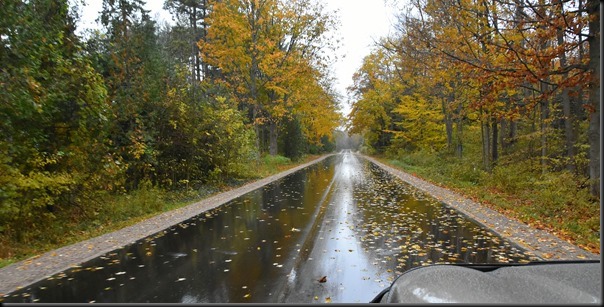 Standing at our living room window peering out at a cold rain soaked gloomy looking day I had to dig deeply inside in search of even the smallest shred of interest and enthusiasm about going outside.  There was nothing there until I happened to turn around and look at the floor behind me.  There on four furry little legs with tail wagging and big pleading eyes was my inspiration.  Five minutes later Pheebs and I made our way through the rain to the Jeep. 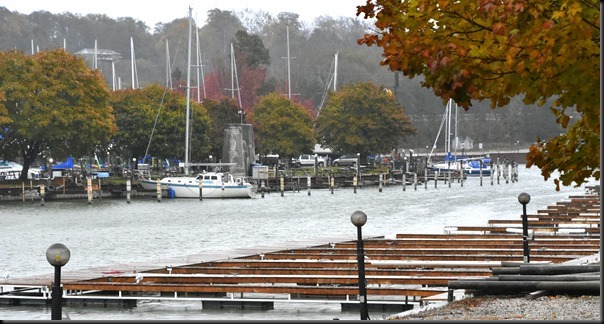 STILL A FEW BOATS IN THE HARBOR 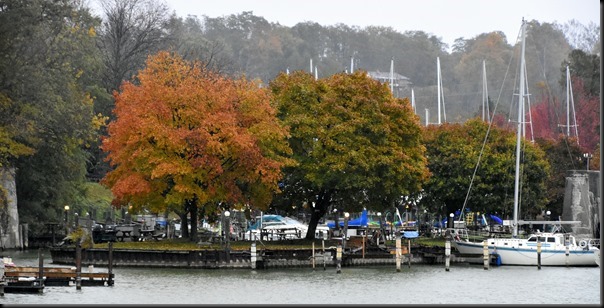 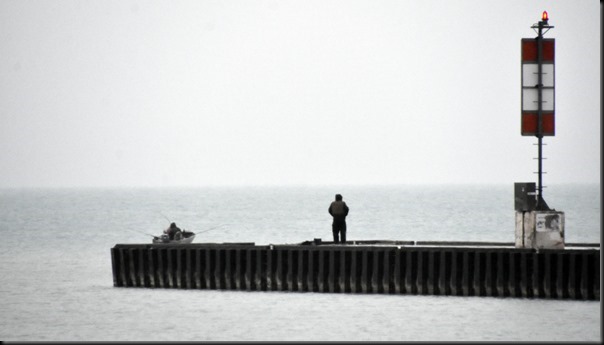 GOTTA BE SOME COLD AND WET FISHERMEN OUT THERE

Figured there was no point in going too far so we cruised into Bayfield and down around the harbor.  Thought about a coffee but drove right on by again.  Minutes later pulling away from a stop sign on one of Bayfield’s picturesque back streets I heard a noise coming from the rear end,  Jeep was sluggish and bumpy.  Knew right away I had a flat tire.  Edged myself around a corner onto John Street and pulled over.  Yep, flat alright but at least it was only flat on one side:)) 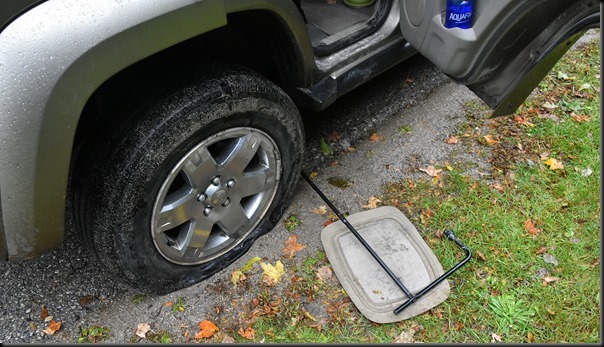 I had no idea where the Jeep’s jack was because I had never had to use it.  After a bit of looking I found it under the back seat passenger side.  It had never been used.  Took me a bit to get it out then figure out how the pieces fit together.  I amazed myself by assembling the jack and buoyed with confidence tackled the problem of getting the wheel off the Jeep.  Knew I would have problem getting the nuts off because they had been machine hammered on.  Brute strength loosened three of them and the last two I had to position the tire iron just right then climb up on top of the Jeep and with both feet jump off the Jeep landing on the tire iron to wrench the bolt loose.  Well Okay, maybe it wasn’t quite that drastic but I did have to use my foot to punch down on the tire iron to snap the nut loose.  Did I mention that it was raining. 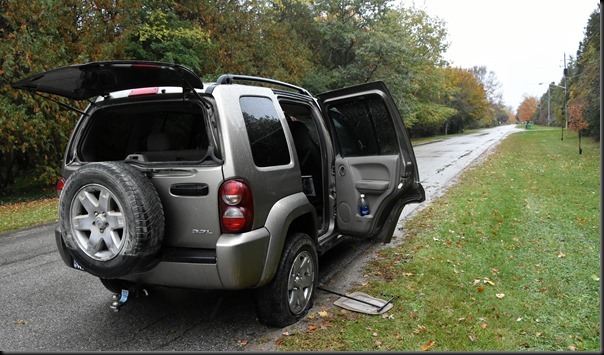 Next I tackled the spare tire bolts hoping I wouldn’t have a problem loosening them and I didn’t.  With the jack securely under the frame I cranked and cranked and cranked until the flat tire was well clear of the road.  I had previously made sure the Jeep was in Park and the emergency brake on.  Pulled the tire off then rolled the spare around.  Luckily it was full of air.  Did I mention it was cold and raining. 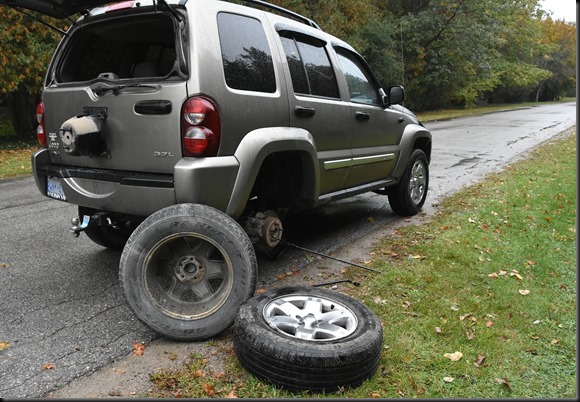 With the tire nuts coming off easier than I had expected I was now at the difficult part.  Getting the heavy 17” spare tire onto the Jeep and this I had to struggle with while sitting on the wet ground trying to get as much leverage as I could.  I couldn’t see the studs extending from the wheel hub in order to get them through the matching tire rim holes.  Didn’t seem to have the arm strength to lift the rim and tire up onto the studs.  Okay how about I lower the Jeep maybe.  So that’s what I did until I felt the studs and holes were at least on an even keel.  Still took a lot of grunting wiggling to finally get those studs poked through the rim holes.  It was at this point I knew I had the problem beat.  A quick tightening of bolts, jack down, another wrench on the bolts and it was clean-up time.  Made sure I had picked up all the parts, tossed the flat tire into the Jeep and we were off.  Time elapsed was about 30 minutes.  Did I mention it was cold and still raining but at least now I was in the Jeep with the heater on. 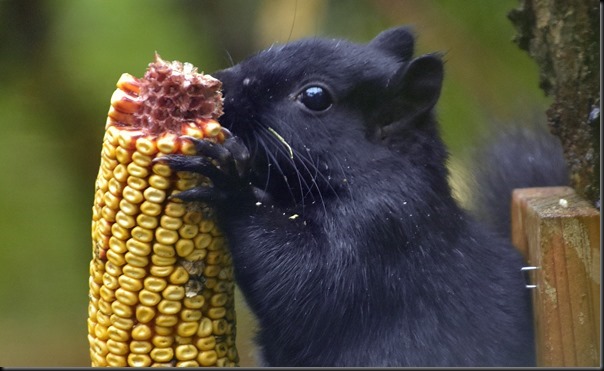 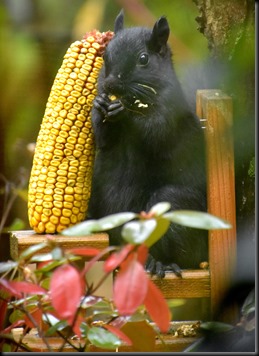 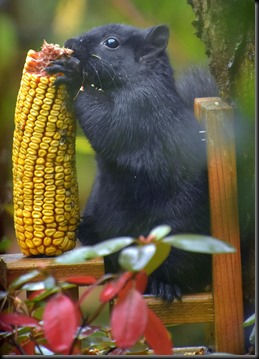 Heading home I sprained my right arm when I tried to reach around and give myself a pat on the back for actually remembering how to change a tire and then actually doing it…..in the cold rain.  Here is a link to the last time I changed a tire nearly 8 years ago about 3400 miles from home.  Flat Tire in Elfrida Arizona  Keep in mind you can enlarge any photo in this older post by clicking on it. 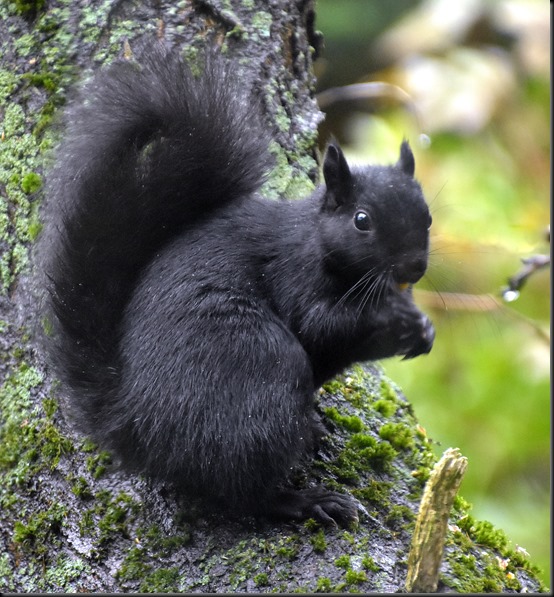 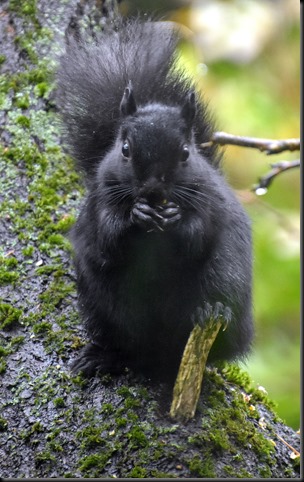 Rain didn’t let up for the whole day so the only one occasionally slipping outside for a few minutes was Pheebs.  Rain expected all day Sunday as well as Monday.  We are both very grateful to be home and in our roasty toasty cozy little house especially in this kind of gloomy weather with it’s cold damp temperatures and abundance of rain.  We sat out a rainy day in a parking lot in Cavendish Prince Edward Island last month in our Motorhome and I much prefer being here where Pheebs and I can at least have us a game of toys where I can chase her round and round the kitchen table and down the hall and back half a dozen times. 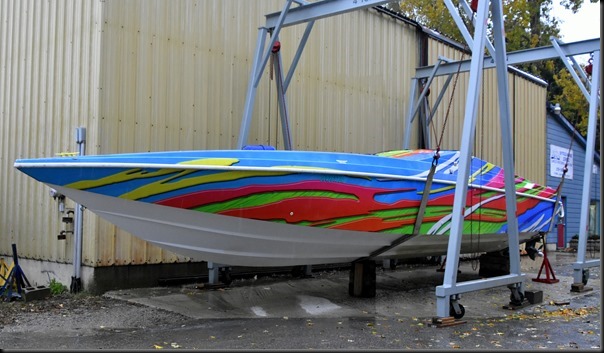 1. Is there ever a day that mattresses aren't on sale? 2.

3. Is there any difference between partly cloudy and partly sunny?

4. How does one know when their bagpipes need tuning?

5. Allstate Insurance has a disclaimer that reads: not available in all states. What?

7. How come you never read the headline, "Psychic Wins Lottery"?

8. Is it really possible to change the direction of a bowling ball by waving your hands?

10. They say laughter is the best medicine - so who came up with the phrase, "I died laughing"?

A man was complaining to a friend: "I had it all - money, magnificent house, big car, the love of beautiful woman, then, POW! It was all gone!" "What happened?," asked the friend. "My wife found out."

An Arkansas State trooper pulls over a pickup truck on I-40 and says to the driver, "Got any ID?" The driver says," ' Bout what?"