FEELING BETTER AND A DECISION HAS BEEN MADE ABOUT OUR MOTORHOME 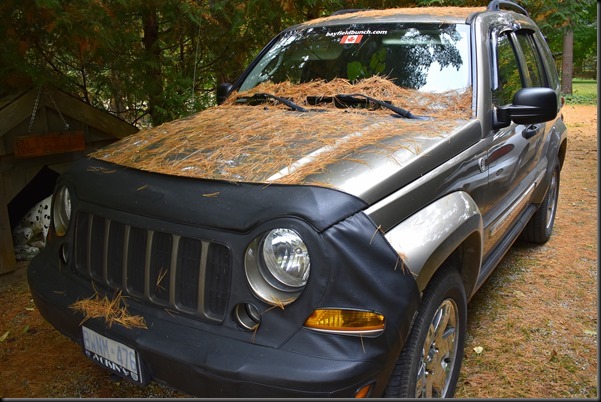 Sometimes priorities just have a habit of taking priority and this morning despite how I was feeling I bulled my way through and got that big Motorhome washed.  So why the priority??  Okay, guess I had better let you all in on something.  We've been wallowing for awhile now about selling our Motorhome and this last trip convinced us our 'long traveling' days are over.  The writing has been on the wall for awhile now and we have decided to sell the Big E.  Some folks have expressed an interest in it and would like to see it so that is why we have a push on to get it cleaned up from our muddy rain soaked Maritimes trip. 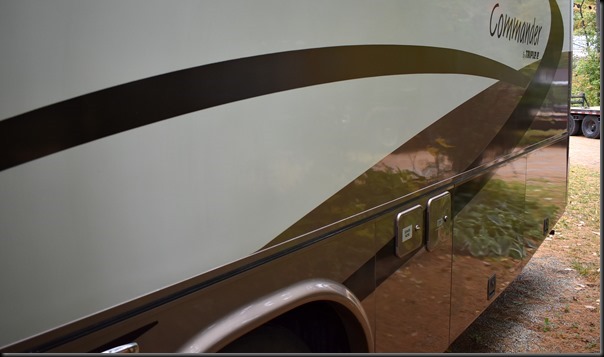 Now, it isn't our plan to hang up the RV keys just yet.  Yes I know we have downsized before and it didn't really work out well for us.  That was then and this is now.  Totally different circumstances.  If we can find a smaller rig we like that suits us we would like to do more 'short' trips in the Spring, Summer, and Fall around our own area here.  Maybe a couple days here, a week there at the most, etc.  We're both just tired of the big cities and the ever increasing maniac traffic which I no longer have much patience for.  Tired of looking for laundromats, squeezing into small showers, worrying about fresh water tanks, black tanks, gray tanks, army tanks, and propane tanks.  Solar panels, batteries, inverters, converters, frankfurters, and the list goes on.  Yes, yes, a smaller RV has a lot of these same things too but we don’t intend to live in a smaller RV for 4, 5, or 6 months of the year anymore.  Day trips and short trips.  I'm also tired of driving a big rig whether towing a vehicle behind it or not.  I just don't seem to handle the stress of all that as well as I once did and I'm finding at this age and stage that it is to my advantage and mental stability to simplify things rather than complicate things.  A smaller RV and no tow vehicle.  Shorter trips more often.  Hopefully better fuel mileage, easier to maintain and keep clean.  Something Kelly can comfortably drive.  A chassis with safety features built in.  Something one can hop in and drive to the corner store for a popsicle.  And yet if one wanted to do a long trip it's still possible.  Would I still like to go back to the Southwest one more time??  Sure I would, but not right now.  Those are our thoughts anyway so we'll see what happens over the next bunch of months. 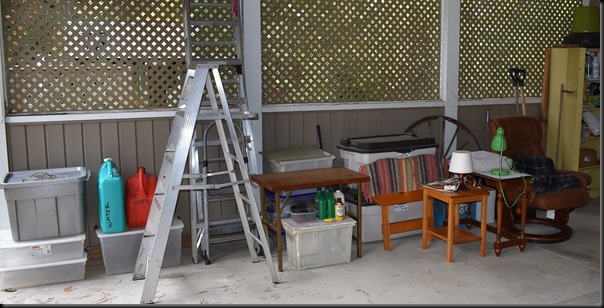 THIS IS ‘SOME’ OF WHAT CAME OUT OF THE MOTORHOME TODAY 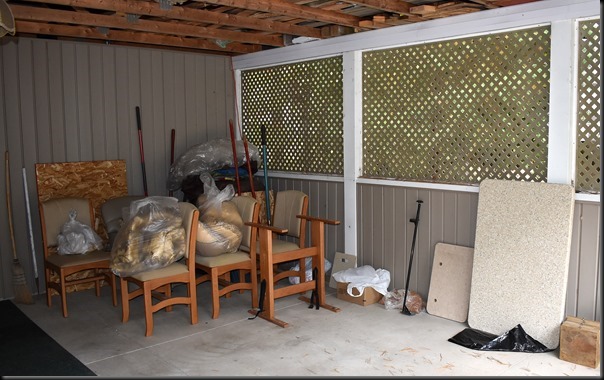 AND THAT IS SOME OF WHAT HAS TO GO BACK IN

Something else I should mention here as well and that is the sheer cost of crossing the border into the States.  Had we decided to head for the Southwest again this winter our medical insurance would have been about $3000 again and that's for only 6 months.  In just the past month alone we have spent about $2000 on the Motorhome (new rear brakes, spark plugs, new manifold bolts and gaskets, a couple new tailpipes, etc.)  We don't exactly have a money tree in the back yard here at the Bayfield Bunch so financial concerns also influenced our decision.  To give you an example of travel costs I'll refer back to our recent Maritime excursion.  We traveled 3,487 miles for a gasoline cost of $1,876.  Yep, we've got a bit of belt tightening to do here at the Bunch. 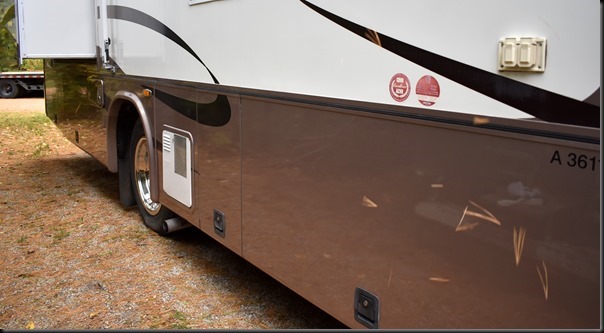 AS I TOOK THIS PHOTO PINE NEEDLES WERE DROPPING

Both Kelly and I worked away at the Motorhome all day.  It's washed and I have all the bins emptied.  We'll start on the interior next.  I was very surprised that my dizziness was not more of an issue today.  I still get dizzy if I tilt my head back and look up but compared to two days ago I am feeling a lot better and the nausea has subsided.  Been able to bend over and pick things up again but I do not do it rapidly.  With a bit of luck I may be back to normal in a few days.  Thanks to everyone for their well wishes. 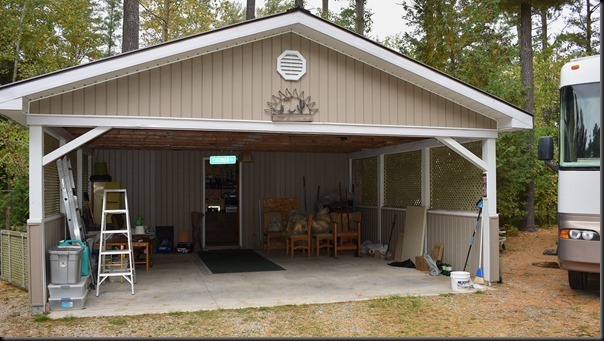 WE BOTH REMARKED TODAY HOW GLAD WE WERE WE HAD THIS CARPORT BUILT A DOZEN YEARS AGO….SURE IS COMING IN HANDY AT THE MOMENT

Pheebs and I missed our Jeep ride this morning so I promised her we would dust up a few country roads in the morning.  After todays busy day I'm needing to get myself back into my country environment for a few hours.  Enjoy some scenery, some calming music, a cup of road coffee, a forest walk if it isn't raining and share some snacks with my best Pal.  Yep, sounds like my kinda morning coming up alright:)) 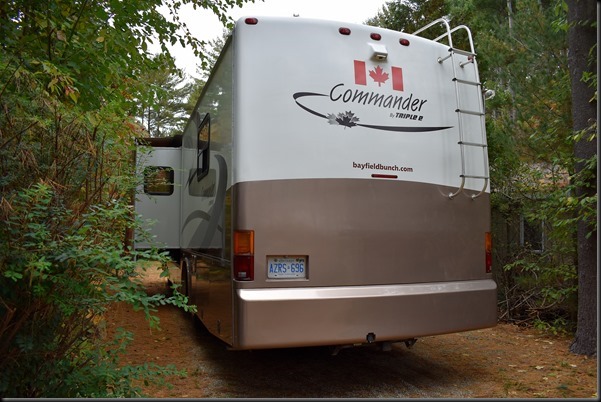 GROANER'S CORNER:(( A fifteen year-old boy came home with a Porsche and his parents began to scream, "Where did you get that car???!!!"  He calmly told them, "I bought it today."  "With what money?" demanded his parents. "We know what a Porsche costs."  "Well," said the boy, "this one cost me fifteen dollars.  "So the parents began to yell even louder. "Who would sell a car like that for fifteen dollars?" they said.  "It was the lady up the street," said the boy." I don't know her name--they just moved in. She saw me ride past on my bike and asked me if I wanted to buy a Porsche for fifteen dollars."  "Oh No," moaned the mother, "she must be a child abuser. Who knows what she will do next? John, you go right up there and see what's going on.  "So the boy's father walked up the street to the house where the lady lived and found her out in the yard calmly planting petunias! He introduced himself as the father of the boy to whom she had sold a Porsche for fifteen dollars and demanded to know why she did it.  "Well," she said, "this morning I got a phone call from my husband. I thought he was on a business trip, but it seems he has run off to Hawaii with his secretary and doesn't intend to come back. He asked me to sell his new Porsche and send him the money. So I did."

Dear Mother-in-law, Don't teach me how to handle my children. I am living with one of yours and he needs a lot of improvement!?

Q: What's more dangerous than being with a fool?

A: Fooling with a bee!

Q: What did the spider say to the bee?

A: Your honey or your life!

Q: Who is a bee's favorite painter?

Q: What did the bee say to the other bee in summer?

Q: What is a bee's favorite classical music composer?

Q: Where do bees go on holiday?

Q: What do you call a bee who's had a spell put on him?