BAYFIELD TO KINGSTON ONTARIO:: BEAUTIFUL SEPTEMBER DAY WITH EVERYTHING TURNING OUT A-OKAY 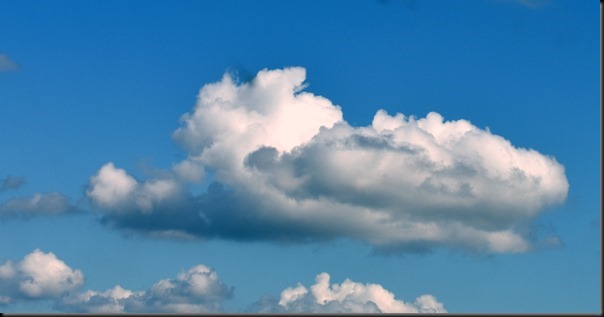 Not being in any kind of a rush this morning we didn’t break with normal routine by running around like a couple scattered Natters.  We loaded all the last minute stuff into the rig, did a couple walk arounds inside and out and forgot my computer mouse.  By 8:15 we had the big wheels rolling.  That’s about the same time Pheebs and I usually head out.  Had a beautifully cool September morning going for us as we quietly rolled out of the Park into Huron Counties sedately quiet rural countryside.  I knew the first hour of our journey would be the best driving hour of the day and so it was.  Nice to be on the road again heading off someplace different for a change:)) 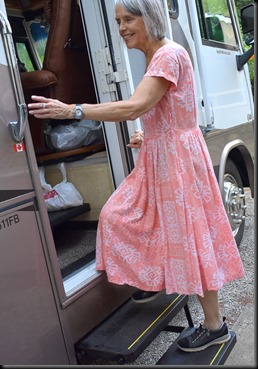 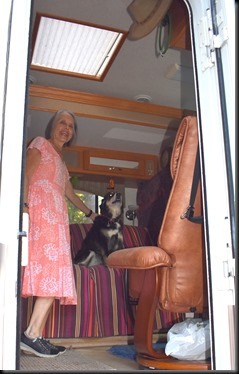 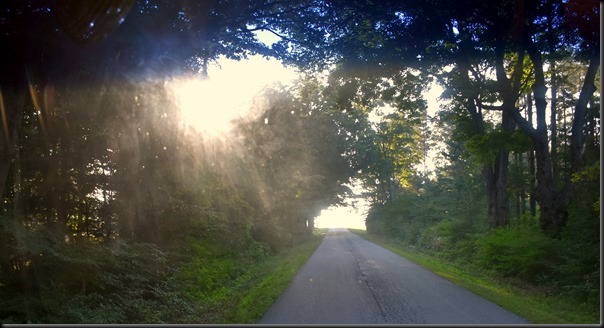 With our gas tank half full we cruised into Clinton’s north end Shell station and topped it up to the tune of $216.00.  ‘YEOUCH’  From Clinton we took the paved north side route running parallel to highway 8 to Shakespeare Ontario avoiding all the small towns along the way and bouncing off the northwest corner of Stratford in the process.  Reaching Shakespeare from the north we turned onto highway 8 and headed East for New Hamburg where we popped into McDonalds for coffee and a few eats to go.  From there is was Bleams Road all the way to the infamous 401 (Canada’s version of an Interstate) at Doon Ontario.  Lots of memories along the way for me because this Bleams Road route is the same one I used for many years while driving for the Stratford Airporter between Stratford and Toronto’s Pearson International Airport. 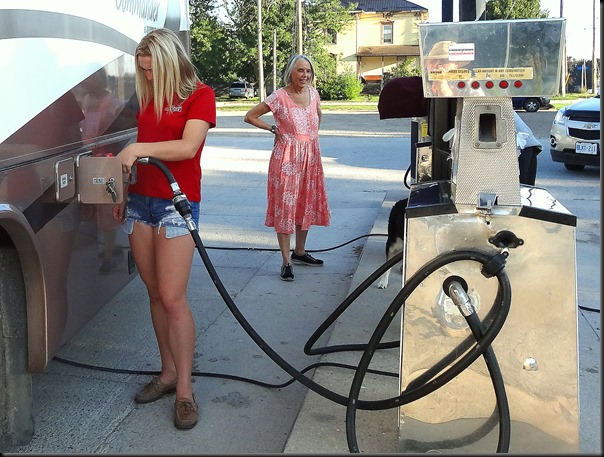 CLINTON ONTARIO WAS OUR FIRST GAS STOP OF THE TRIP 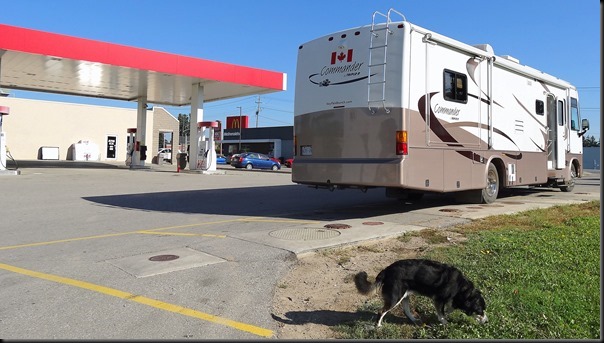 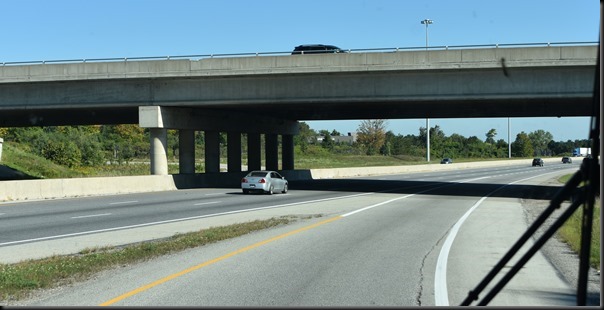 It’s been over 18 years since I last set a tire on the 401.  I already knew back in the year 2000 traffic was quickly becoming much worse so I got out of my stressful heavy volume traffic job while the getting was good.  Today was a perfect example of what I knew was coming way back then.  From what I remembered I figured Sunday should be a quieter day on the 401.  Nope, I was wrong.  Traffic was as heavy as any week day years ago.  Back then I always thought of this stretch of 401 as nothing more than a glorified race track and one had to drive accordingly. 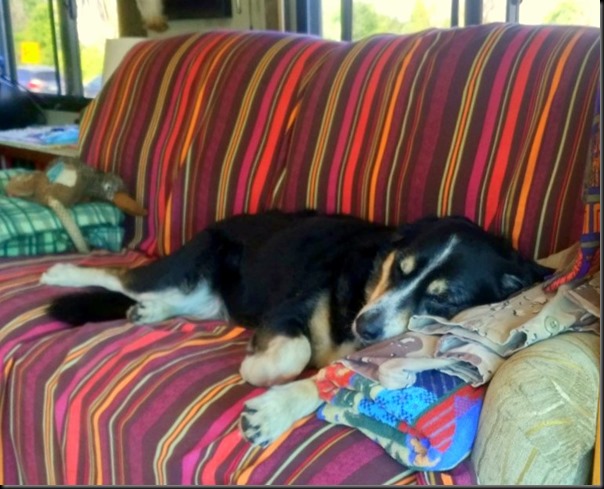 However, I was totally surprised by the volume of Sunday morning traffic as we torpedoed ourselves through Canada’s largest city, Toronto.  For awhile I used to do the early morning rush into the airport years ago and today’s traffic was akin to that morning rush.  Luckily Toronto is a relatively easy city to get through traveling either East or West.  No by-passes and no exits.  Just stay in the Express lanes and keep on keeping left.  Took us about 40 minutes to crash our way through from one side of the mega madness city to the other. 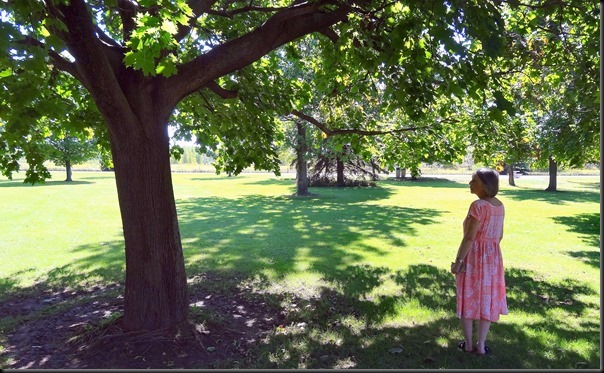 We were well East of Toronto, Oshawa, and Ajax, before some civility began to appear in the form of traffic thinning out a bit but it remained steady all the way to Kingston Ontario.  I’m typing this from an OnRoute rest area on Kingston’s West side.  We’re in a nice Park like setting for the moment and if we can get away with staying here for the night we will.  Humidity is bad though and I have my little green fan sitting sitting right on my stomach blowing into my face.  Yes my stomach is big enough to hold a fan:((  Update::  A nice chap came around to lock the Park gates for the night and said we could stay right where we were if we wanted to.  Well we wanted to so we did.  Said he would be around at 6 in the morning to unlock the gates and that was totally fine with us.  So here we are in a gated Park for the night all by ourselves.  I just don’t know how we get so lucky sometimes:)) 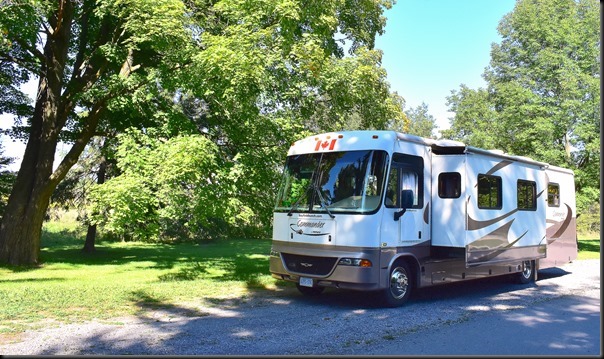 ARRIVED HERE ABOUT 2:30 AND POPPED OUR SLIDES OUT….FIGURED WE MIGHT HAVE TO LATER MOVE A SHORT DISTANCE AWAY TO A TRUCK/RV AREA BUT LUCKILY WE DIDN’T

OF COURSE WE TRIED TO CAMOUFLAGE OURSELVES A BIT

We will probably reach the first of our many destinations sometime Monday and if all goes well it might have something to do with a river, water and a boat.  We’ll see:)) 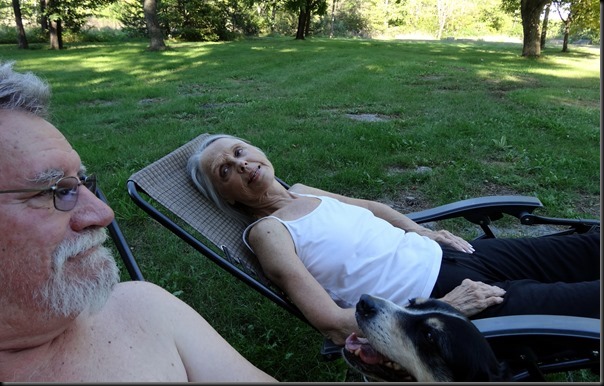 SAT OUR CHAIRS OUT ON THE GRASS, DID SOME READING, WORKED ON MY POST, AND SWATTED MOSQUITOS 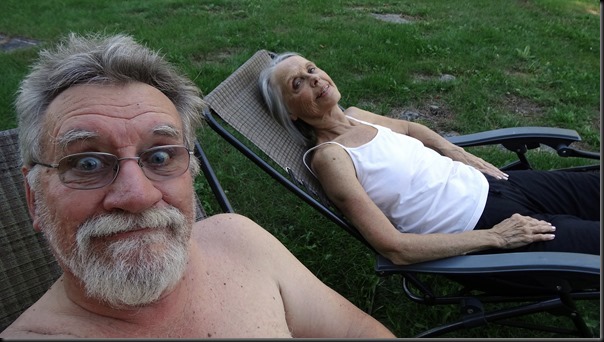 GROANER’S CORNER:((  A man drives to a gas station and has his tank filled up. The gas pumper spots two penguins sitting in the back seat of the car. He asks the driver, "What's up with the penguins in the back seat?"The man in the car says "I found them. I asked myself what to do with them but, I haven't had a clue."  The clerk ponders a bit then says, "You should take them to the zoo.""Hey, that's a good idea," says the man in the car and drives away.The next day the man with the car is back at the same gas station. The clerk sees the penguins are still in the back seat of the car."Hey, they're still here! I thought you were going to take them to the zoo.""Oh, I did," says the driver, "And we had a great time! Today I am taking them to the beach."

A lot of people think kids say the darnedest things, but so would you if you had no education.