Kelly’s barber shop was open this morning so I started my day off with a haircut on the back deck.  A short snort through the countryside for Pheebs and I.  Cloudy skies kept the Sun from boiling us up.  Sporadic rains came mid morning.  Accomplished some puttering and that was it for the day.

A GATHERING ON BAYFIELD’S SOUTH PIER THIS MORNING 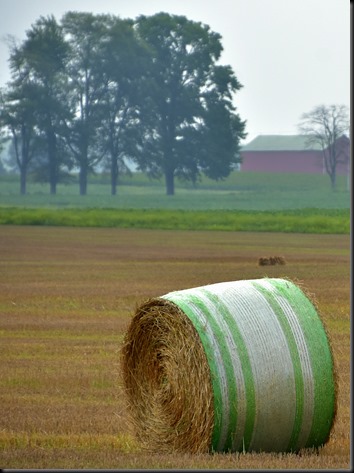 LOOKS LIKE THEY ARE MAKING DESIGNER STRAW BALES NOW >>>>>>

GROANER’S CORNER:(( The new army recruit was given guard duty at 2 a.m. He did his best for a while, but at about 4 a.m. he went to sleep. He awakened to find the officer of the day standing before him.  Remembering the heavy penalty for being asleep on guard duty, this smart young man kept his head bowed for another moment and looked upward and reverently said, “A-a-a-men!”

My girlfriend told me to take the spider out instead of killing it. We went and had some drinks. Cool guy. Wants to be a web developer.