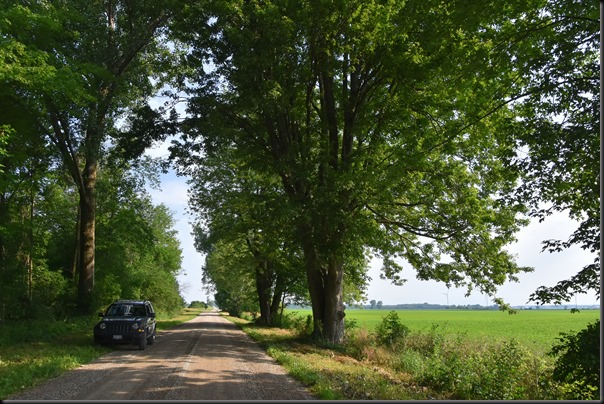 ONE OF OUR COUNTRY ROAD LEG STRETCH STOPS

Friday morning Pheebs and I headed east out of the Park and Saturday morning we headed north.  Can’t travel west or we would be underwater in Lake Huron in less than two miles.   Only choice was south this morning and that meant risking a latte line-up at Bayfield’s Shop Bike Coffee Roasters coffee shop on main street if I felt inclined to stop for a coffee that is.  After a short wrestle with myself that’s where we headed. 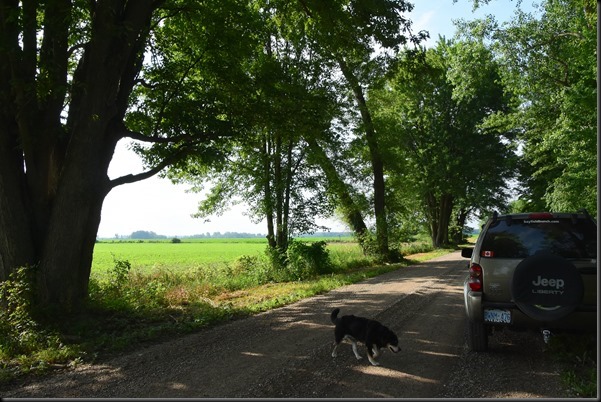 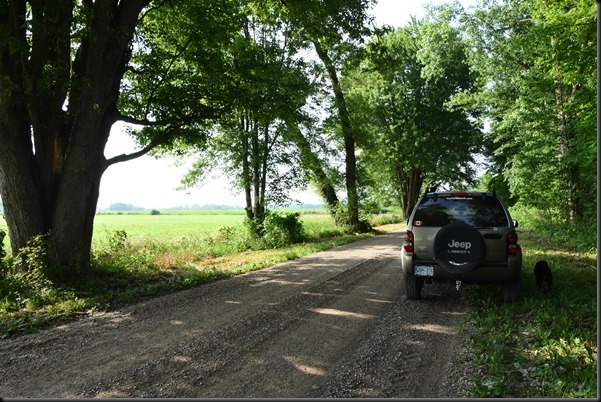 Coming up main street I saw a couple parking spots so pulled in but another car pulled right in beside me.  Oh-Oh the race was on to see who got into the coffee shop first.  They got the drop on me when I tangled myself up in my seat belt.  And to make matters worse they definitely looked like a latte schmotte couple.  Oh Geeezzzz there goes my morning.  Grumbling myself into the coffee shop behind them I resigned myself to a long wait while they had there expensive fancies all concocted and brewed up.  But wait, what’s this did I hear??  “Two black coffees with cream to go please.”  Well I couldn’t believe my luck and almost wanted to pat them on the back, shake their hands, thank them ,and wish them well.  While getting my coffee I heard the fellow behind me order two fancy schmancy lattes and he even had instructions for the staff member on how he wanted those schmattes made.  A sprinkling of green chowder mixed delicately with a hint of Spanish garlic sauce and churned goat’s milk.  And he had just got started.  I wasted no time hustling myself out the door thanking my lucky chickens I had not got stuck behind that guy!! 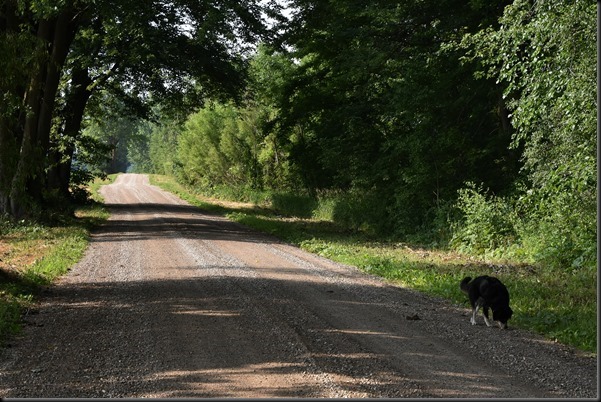 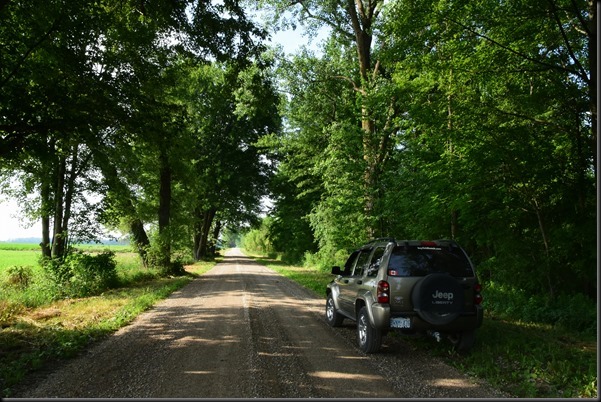 YOU MAY HAVE NOTICED I DIDN’T TAKE TOO MANY VARIED PHOTOS THIS MORNING….SOME DAYS ARE JUST LIKE THAT I GUESS BUT GET READY FOR THE COWS:))

With both front windows down and the Jeep’s A/C going full tilt we had ourselves a nice slow Monday morning country road drive.  Kicked up a little dust, stopped for a couple leg stretches, conversed with a herd of Jersey cows, and had some quietly harsh words for a few high speed Hosehammers coming up way too fast behind us.  It was one of our very typical morning Jeep rides.  We were back home by 10 o’clock and once again confined to the house because of the outside oppressive heat.  I did manage a few short five minute spurts outside to trim a couple shrubs but immediately had to duck back inside and lay spread eagled on the floor in front of my downward tilted big fan. 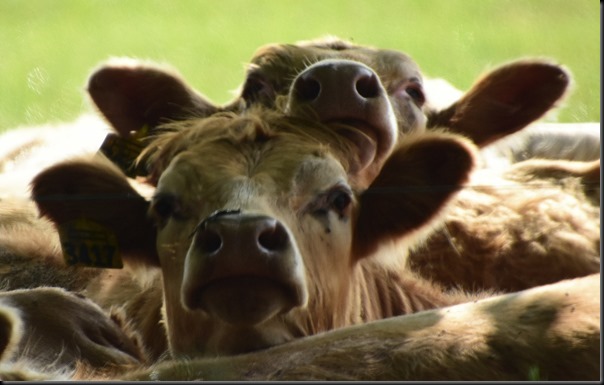 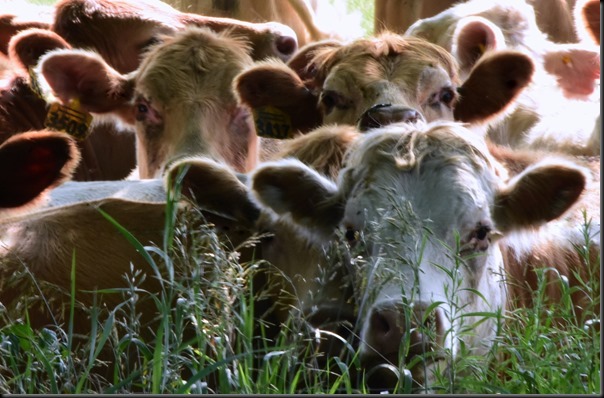 Hard to believe we are already into our first week of July already.  In six shorts weeks it will be the middle of August and that is where the Seasons begin their slow subtle shift from late summer to early Autumn.  Days begin to become noticeably shorter and the air seems to take on a different feel.  Even the sounds of nature begin to change.  Oh how I look forward to Autumn every year:)) 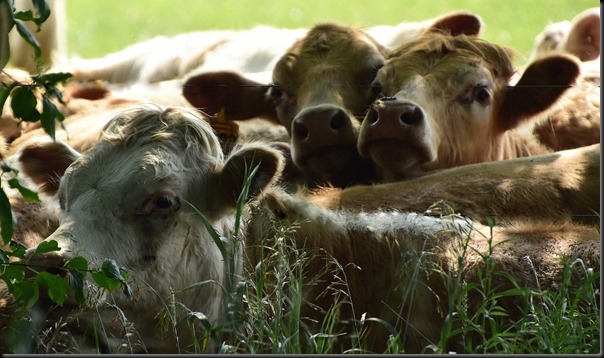 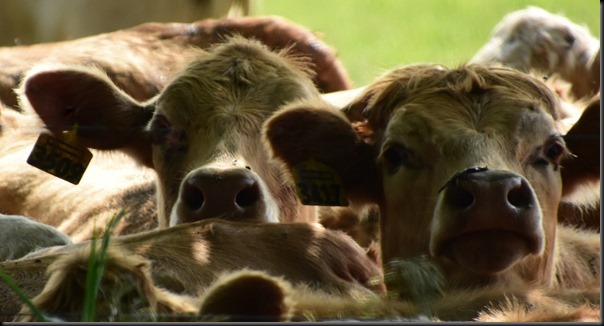 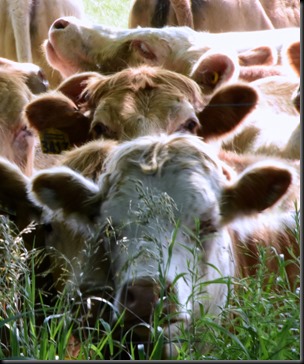 GROANER’S CORNER:(( It had been snowing all night so I decided to go outside and make a snow sculpture……………….
8:00 am I made a snowman.
8:10 A feminist passed by and asked me why I didn't make a snow woman.
8:15 So, I made a snow woman.
8:17 Another feminist neighbor complained about the snow woman's voluptuous chest saying it objectified snow women everywhere.
8:20 The gay couple living nearby threw a hissy fit and moaned it could have been two snow men instead.
8:22 The transgender man/woman person asked why I didn't just make one snow person with detachable parts.
8:25 The vegans at the end of the lane complained about the carrot nose, as veggies are food and not to decorate snow figures with.
8:28 I am being called a racist because the snow couple is white.
8:31 The Muslim gent across the road demands the snow woman wear a burqa.
8:40 The Police arrive saying someone has been offended
8:42 The feminist neighbor complained again that the broomstick of the snow woman needs to be removed because it depicted women in a domestic role and implied women were witches.
8:43 The council equality officer arrived and threatened me with eviction.
8:45 TV news crew from the ABC shows up. I am asked if I know the difference between snowmen and snow-women? I reply, 'Snowballs' and am now called a sexist.
9:00 I'm on the News as a suspected terrorist, racist, homophobe sensibility offender, bent on stirring up trouble during difficult weather.
9:10 I am asked if I have any accomplices. My children are taken by social services.
9:29 Far left protesters offended by everything are marching down the street demanding for me to be beheaded.
Moral of the story is there is no moral to this story.

And speaking of winter have you heard about the big snowstorms predicted for this year?  Seems it's flake news!”